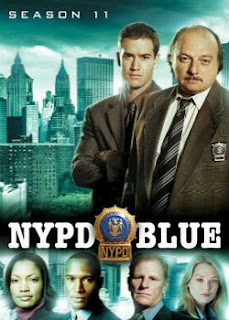 Season Eleven was potentially the last season of NYPD Blue, even though the series remained ABC's highest-rated drama at the time.  The cost of the show had ballooned over the years, while ABC was suffering from some rather pathetic ratings, overall.  A deal was struck to keep the series alive for one more year at a reduced budget, however, which meant massive changes to the cast list at the end of the season.

Were those departures handled with tact and respect for the characters?  Or did half the characters go out like Adrienne Lesniak?

The cast this year consists of...

Dennis Franz as Det. Andy Sipowicz
This would seem to be a significant Sipowicz season, but he probably has less camera time this year than in any season prior.  There are numerous ongoing plots this year, and much of the time that's normally devoted to Andy's personal life was apparently sacrificed. Andy is married again this year, and becomes a new father. The second event occurs off-camera, for touchy reasons that will be explained later...

Mark-Paul Gosselaar as Det. John Clark, Jr.
After a year of exhibiting no real feelings at all, Clark begins to deal with his father's suicide.  Or, more exactly, Clark tries not to deal with his emotions and the consequences of his guilt and repression begin to invade other aspects of his life.

Gordon Clapp as Det. Greg Medavoy
One of the worst Medavoy seasons.  He's treated as comedic relief a few times during the year, and often has little to do in certain key episodes (like the season finale).  When he's allowed to just work straight as a cop, he remains one of the strongest characters, however.

Henry Simmons as Det. Baldwin Jones
The best Baldwin season, as it turns out.  Baldwin takes an interest in Michael Woodruff, an adolescent boy who witnessed his father kill his mother, but refuses to testify against him.  Eventually, Baldwin goes through the steps of officially adopting Michael.  The story could've been riddled with cliches, but it's served well by all of the actors, and remains one of my favorite late-period Blue storylines.

Charlotte Ross as Det. Connie McDowell (in episodes 1-14)
Oh, dear.  Charlotte Ross announced that she was going on maternity leave, and within a few weeks, it was confirmed that she was leaving.  Period.  The only official reason given from Ross (and she maintains this to this day on her website) is that she was so in love with being a mom that she just couldn't go back to work.  The production company tried to justify her not coming back by citing the reduced budget for the next season, but c'mon...she's the female lead of the show.  Her character's married to the main character, and the last time the audience saw her, she was around seven months pregnant, working her last day with no fanfare whatsoever.  If the producers really wanted her around, they would've done something -- at the very least, she could've made those random cameos that Sharon Lawrence made during her final years on the series.  Connie McDowell was NOT supposed to be exiting like this; clearly, there was more planned for the character, but something behind-the-scenes, which remains unknown to this day, happened.

Garcelle Beauvais as ADA Valerie Haywood
For a character that no one seemed to warm up to, she sure stuck around for a while.  The role of Valerie Haywood was cut at the end of the year for budget reasons, never saying goodbye, and not leaving a noticeable absence when she's gone.

Jacqueline Obradors as Det. Rita Ortiz
Rita sticks around, though.  Rita always sticks around.  And she no longer has those Dr. Octopus bangs, thanks be to the hair & make-up department.  This year, Rita's past relationship with John Clark is literally forgotten (not even mentioned once the entire year, even though there are at least three occasions when it logically would've come up.)  Because both Rita and the Lt. Rodriguez character are caught up in the mess caused by the previous season finale, when she had to shoot a fellow cop in order to save Rodriguez's life, they end sharing several scenes together.  And, for some reason, a bed.

Bill Brochtrup as PAA John Irvin
John officiates the Sipowicz wedding, which symbolizes the deepening of his relationship with Andy over the years.  He also puts his hand over his mouth and gasps, "Oh, my god!" a few times, in order to sell the importance of various events. 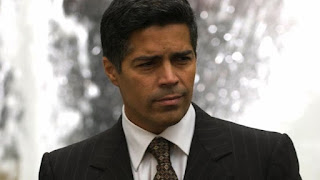 Esai Morales as Lt. Tony Rodriguez (in episodes 1-13)
Lt. Rodriguez is written out of the show in a clever way.  Following the acquittal of Captain Fraker, the cop who shot him in the previous season finale (and now claims self-defense), Tony finds himself ostracized on the job.  It adds an element of realism to the TV drama aspects of the series -- a rogue cop shooting one of the leads makes for a great season finale cliffhanger, but what are the later ramifications?  And what happens when the villain gets off?  Tony's stuck dealing with internal politics that don't favor him at all (which does seem to contradict the way Tony was introduced, as a "cop hero" loved by The Job, actually, but it wouldn't be the first time the show ignored inconvenient continuity.)  Tony takes a job as the head of security for a real estate developer, and spends his final week on the job pursuing his romantic interest in his subordinate, Rita.

In real life, actor Esai Morales griped that his character didn't have enough to do, and that he wasn't being paid "Dennis Franz money," so he wanted out.  I always thought this was a petty complaint, given that a) he had much more to do than his predecessor, who was a steady presence for seven seasons, even though he often had maybe two lines per episode, and b) he wasn't the star of the show, anyway.

John F. O'Donohue as Sgt. Eddie Gibson (in episodes 13-22)
One of the more controversial moves ever pulled by the producers is to have joke character Eddie Gibson promoted to Sergeant, then moved over to command the 15th squad.  The in-story rationalization is that there aren't enough lieutenants for each detective squad, and Eddie as it turns out is close to the Chief of Personnel, so he lands the cushy position.  Fans griped that this was far too unrealistic, but apparently, there were detective squads in the NYPD that really did answer to sergeants instead of lieutenants.  Eddie is played as a goof a few times, but overall, I think the writers restrained themselves.  There is a different dynamic in the Gibson episodes, but it's not one that lasts. Sgt. Eddie Gibson ends up with the shortest run of all the boss characters on the show.

I've mentioned this before, but it's worth repeating.   Actor John F. O'Donohue really was a lieutenant in the NYPD, before he retired and took up acting later in life.  It's cool that he actually got to play a cop boss in a TV show, even if his character was such a dope, he couldn't convincingly make O'Donohue's real-life grade.

And guest appearances from...

Daniel Benzali as James Sinclair
The character of slimy-yet-excellent attorney James Sinclair, who goes all the way back to the pilot, makes his final appearances this year.  Daniel Benzali usually reprised his role whenever the producers really wanted to sell the importance of an event, so he appears in the opening episodes this year during the Captain Fraker trial.  Interestingly, in his recent book, Steven Bochco lumped Daniel Benzali in with David Caruso in the "brilliant but too difficult" category of actors.

Jessalyn Gilsig as Det. Kelly Ronson
Jessalyn Gilsig seemed to be everywhere on TV in the early 2000s.  Remember the blonde teacher, the nominal lead of Boston Public, who just disappeared in-between seasons with no explanation?  That was Jessalyn Gilsig.  The other crazy blonde love interest for Christian on Nip/Tuck?  That was Jessalyn Gilsig, too.  She appears here for the final six episodes as Det. Kelly Ronson, a straightlaced cop who aspires to become an attorney.  The season finale hints that there's much more to her past than we could've guessed, but Kelly simply disappears, much like Gilsig's Boston Public character.  Many fans were indifferent to Det. Ronson, but I do think Jessalyn Gilsig adopted an interesting New York accent for the role, and there was probably some potential for the character.

Kim Delaney as Det. Diane Russell
Kim Delaney made her final return in a special four-part storyline, where Det. Russell helps the detectives of the 15th work a serial killer case.  The audience also learns that Diane has been drinking again, and that she possibly has breast cancer.  While it's always nice to see Kim Delaney return, this didn't turn out to be Diane's best showing.  Her arc has a speedy, far too tidy conclusion, given what the producers had just put her through, and the traditional ethos of NYPD Blue.  Also, the story is essentially another case of Diane falling apart without Bobby, and David Milch had already taken her past that in his final season. 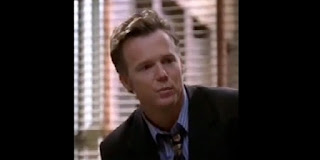 Scott Winters as Det. Stan Hatcher
I've long harbored a belief that this character was created as an intentional parody of David Caruso.  I have no way to prove this, and I think only a handful of people still working on the show on a daily basis ever interacted with Caruso, but it's possible that someone just thought this was funny based on Caruso's reputation.  A hotheaded ginger with poor people skills, who thinks he's a lot tougher than he probably is?  Okay, maybe it is a coincidence, but the thought makes the Det. Hatcher episodes more entertaining to watch.

Det. Hatcher was created as a way to bring some internal drama to the series, something the show had been largely missing ever since Season Three, when a decision was made to make every supporting player a competent, likeable detective.  Hatcher is the exact opposite -- arrogant, abusive, and too self-absorbed to work as an asset on any case.  I think there's a great idea in there, but it was overplayed.  It's just too obvious from his first appearance that Hatcher's only here for one story arc, and it's a squandered opportunity.  Forcing the squad to work with an incompetent cop, or just one who isn't easy to tolerate, and not offering an obvious solution, would've been a great status quo.

Next time...Just how many sex scenes were edited down thanks to ABC's fear of the FCC?  And which bit role would Nick Offerman like to forget today?
Newer Post Older Post Home
Posted by G. Kendall at 4:30 PM