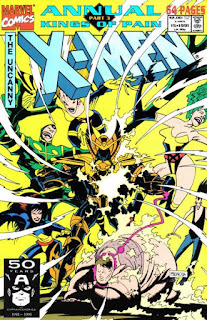 In a Nutshell
The combined X-Force, New Warriors and Muir Island X-Men fail to stop the return of Proteus.

Plot
1st Story: As X-Force and the New Warriors approach Muir Island, the Shadow King loosens his hold on the inhabitants there, but Moira and her X-Men still attack the two other groups until Moira realizes the odds are against them, and asks Cable why they are there. Meanwhile, Harness and Piecemeal arrive in Edinburgh, where Piecemeal immediately begins soaking up Proteus' ambient energy. As Cable explains the situation to Moira, she receives a call from WHO, informing her of a disturbance in Edinburgh, and the three teams realize this is Harness' final move. Rushing to the city, one group of heroes attacks Harness while Moira leads another in an attempt to remove the Proteus energy from Piecemeal. However, while Harness is defeated and revealed to be Piecemeal's mother, no method of stopping Piecemeal's absorption works, and the boy swells in size until Proteus emerges, declaring that he and Piecemeal are one, shortly before he triggers a massive explosion of energy.

2nd Story: In Kuwait City, the surviving members of Freedom Force battle Desert Sword over Dr. Kurtzman. Blob and Pyro manage to escape with Kurtzman, but get separated from Avalanche and the badly injured Crimson Commando in the process. As Avalance and Commando head towards the extraction point, Blob and Pyro are surrounded and, following their orders, Pyro kills Kurtzman. Meanwhile, Avalanche and Crimson Commando reach the airport, but pursuing members of Desert Sword hold back, as the site has been mined. The two mutants trigger the mines, but Desert Sword is shocked to discover both still live.

Firsts and Other Notables
Last seen collectively as thralls of the Shadow King in X-Men #269, the Muir Island X-Men are the X-Men of this annual, specifically, Moira, Madrox, Polaris, Siryn and Legion. Amanda Sefton is nowhere to be found, but she does appear in the subsequent "Muir Island Saga", so she's still around somewhere, presumably. Similarly, both Rogue and Guido are shown to be on Muir Island in the upcoming story, but it can probably be assumed they haven't gotten there yet following their respective last appearances in X-Men #274 and #275. A narrative caption explains that, upon the arrival of the New Warriors and X-Force, the Shadow King loosens his hold on the inhabitants, though no explanation is really given as to why he does so. 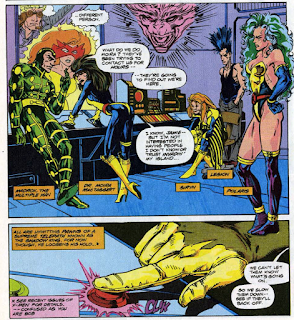 Also worth noting is the fact that Polaris is moving about freely in this story, whereas she was being held physically captive in X-Men #269 and continues to be so restrained in "The Muir Island Saga". It really does seem like Nicieza just missed that particular plot point.

This issue marks Siryn's first appearance since the end of Fallen Angels; sort of the reverse Amanda Sefton, she hasn't been seen amongst the Muir Island X-Men in their previous appearances, but it's generally considered that she's been on Muir Island this whole time, and she will also stick around for the "Muir Island Saga", leading into her eventual role in X-Force. No reference is made this issue to Siryn, Madrox and Boom-Boom all being part of the Fallen Angels.

Proteus returns by the end of this issue, albeit in a slightly different manner, now a merged form of Kevin MacTaggert and Piecemeal. This marks one of the few times that Proteus returns following his death in X-Men #128, a remarkable level of restraint on the part of the collective X-writers and editors given the comic book-friendly nature of his powers and his personal connection to the team. 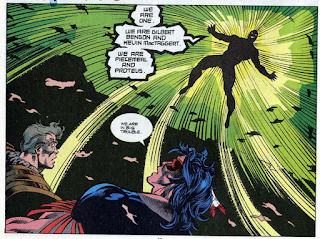 The shadowy figures manipulating the events of this story behind the scenes while playing a symbolic game of chess appear more clearly. They haven't officially been identified yet, but they're pretty clearly Gideon and Toad.

Brigadier Stuart, the leader of WHO from Excalibur, appears briefly in this annual; she was also a de facto part of the Muir Island X-Men during the Reavers assault on the island in issues #254-#255. 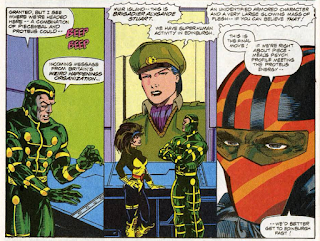 The Classic X-Men reprints of the issues comprising the original Proteus story are referenced in footnotes in this issue, something that doesn't happen too often.

The second story in this annual continues "The Killing Stroke" Freedom Force story from New Mutants Annual #7. The third story is a Mojoverse-set retelling of the history of the X-Men, which, in true Mojo fashion, ends with Mojo winkingly-declaring that the story has to be false as its entirely too convoluted. The fourth and final story features Wolverine fighting his adamantium skeleton in a dream.

Creator Central
Art in this issue comes from Tom Raney, who will, amongst other things, contribute some fill-in work for the X-Office on-and-off through the years, as well as serving as the regular artist on Howard Mackie's Mutant X series. He's an artist whose name rarely excites me when I see it in the credits, but whose work is perfectly fine. In a lot of ways, both in terms of his somewhat more exaggerated, cartoony style and his seeming role as something of a recurring fill-in artist, he reminds me of a Rick Leonardi for the 90s.

A Work in Progress
The New Mutants are once again referred to as X-Force in this issue.

Canonnball is able to dull his blast field and fly completely stealthily.

He also notes that his team needs more fliers (as he's currently the only one). 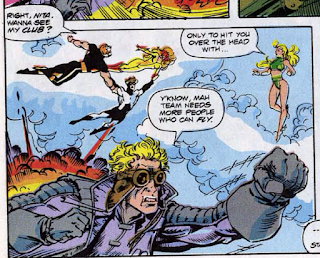 Moira refers to the Muir Island X-Men collectively as "Islanders", a term I don't think gets used outside of this story.

Justice mentions that he's read Moira's textbook, while Sam mentions her odd behavior of late (specifically for him, her appearance in New Mutants #89). 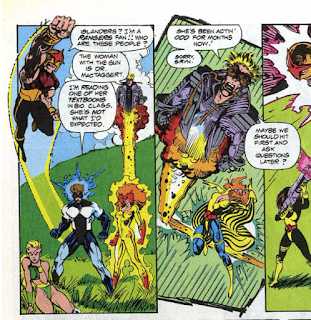 Moira references her decision to not try and clone her son, and to let him rest in piece, as depicted in the back-up story to Classic X-Men #36 (which was written by Nicieza, and also established Proteus' real name as Kevin, repeated in this story). 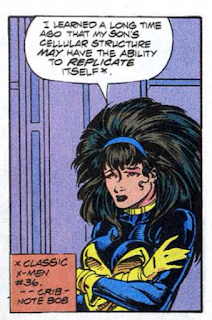 Once again, Domino pretty much spends the issue hanging out in the cockpit, while Shatterstar is once again seen using his mutant power, putting the frequency with which its used in this story miles ahead of how often he'll use it in X-Force (where Liefeld generally just has him using his swords).

This issue reveals that Harness is Piecemeal's mother.

For Sale
There's an ad in this issue for the second Marve Universe trading card series, which reminds me that I need to find a time to slot in the second "Unstacking the Deck" post. 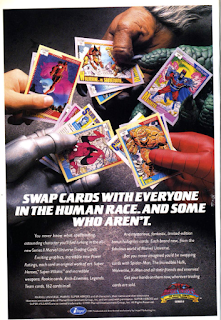 As further proof that everything warranted a set of trading cards in the early 90s, there's an ad for the Terminator 2 trading cards as well (and, keep in mind, T2 was an R-rated film, so technically, the kids who would be buying the cards wouldn't be able to see the movie). 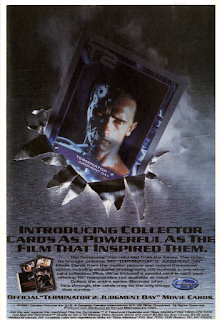 Teebore's Take
This is the point where the storyline starts to get dicey, mostly because Nicieza is now juggling THREE full teams of character, such that, even while the plot is, for the moment, more streamlined (it's pretty much just "stop Harness and Piecemeal), everything is still rather chaotic and jumbled (especially since the only new character introduced in this chapter who matters to the story is Moira). It also suffers a bit for the narrative hoops Nicieza has to jump through to even write an X-Men annual at this particular point in the series' existence: with the main team off in space, he, somewhat smartly, turns to the second team of X-Men that are still hanging around on the margins, the Muir Island group (in a different world, where Claremont got to do his "non-team" thing a bit longer, I suspect this is the kind of thing we'd have seen more often: stories hopping from one group of characters to another). Except, the Muir Island group at this point are pretty firmly entrenched as being in the thrall of the Shadow King, so much so that the X-Men are racing back to Earth specifically to face him (and thus can't realistically get slotted into a detour annual story first).

So we're left with a handwave-y explanation that the Shadow King decided to loosen his hold on the Muir Island X-Men, basically for no other reason than so they can participate in this story. Yet he doesn't release them entirely, since they're still kind of dicks (which leads to our second "misunderstand, then team-up" fight in as many chapters, another problem with this issue), and if he did, you'd have to think they'd realize what's going on and, at the very least, run far away from Muir Island. So we're stuck with a central group of characters caught in a weird limbo, where they're simultaneously being positioned as antagonists for the main characters in the main book but also being asked to headline an annual in the meantime. Granted, the spotlight on the oft-forgotten Muir Island group is responsible for what little charm there is to this issue, and the story as a whole (in that the idea of spotlighting a different group of X-Men is just kinda fun), but it's really hard not to see the seams that are (barely) holding it all together, the result of a creative team having to churn out an annual at a time when the series is on the verge of a major transformation, and concerned with much bigger things.

Next Issue
"Kings of Pain" concludes in X-Factor Annual #6 tomorrow. Next week, She-Hulk #26 and Excalibur #38.