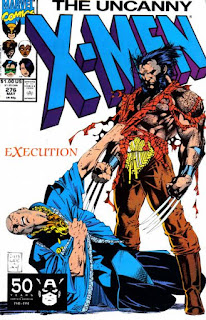 In a Nutshell
Wolverine kills Professor X, who turns out to be a Skrull in disguise.

Plot
Gambit and Jubilee watch from hiding as Professor X oversees Gladiator's torture of the captive Deathbird. Urged into action, Gambit attacks, much to Jubilee's dismay, and in the ensuing fight, a captive Lila Cheney is revealed. Freed from her power dampening manacles, she teleports away with Deathbird, reluctantly abandoning the X-Men, after which Gambit triggers an explosion that attracts the attention of the rest of the X-Men and Starjammers. Investigating, Wolverine finds something in the rubble that confirms his suspicions. He leaps at Professor X and kills him, only to be taken down by Psylocke's psychic knife. Just then, Lila and Deathbird return, teleporting away with the rest of the X-Men save Psylocke and Wolverine, as well as the missing Jubilee and Gambit. In the wake of their departure, the Shi'ar Chancellor sends the Starjammers after the X-Men, while the X-Men arrive on the homeworld of the P!ndyr. 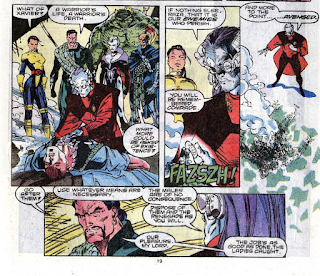 Deathbird explains that every living being on the planet was slaughtered on Xavier's orders, and that similar massacres have been carried out all over the empire, which is why she sent Lila to bring the X-Men to her. Banshee is reluctant to believe her, but Storm, realizing some of Xavier's recent actions don't add up, is more inclined to trust her. Just then, the Starjammers arrive in orbit, and the X-Men prepare to attack, but Deathbird, feeling a telepathic pull, forces Lila to teleport her away again, leaving Forge, Banshee and Storm alone to face the Starjammers. Back at the Imperial Palace, the captive Wolverine and Jubilee are added to the breeding stock of the Warskrulls, who have replaced several key figures, including Psylocke and the deceased Xavier. Their leader undergoes a painful transformation to become a new Xavier, thus maintaining the Skrulls' control over Lilandra and her empire. But the real Xavier declares that while he may be a prisoner, he is far from beaten.

Firsts and Other Notables
This issue reveals that Professor X, as well Oracle of the Imperial Guard and Psylocke have been captured and replaced by shape-shifting Skrulls (called Warskrulls next issue, to differentiate them from regular Skrulls who, at this point in time, have lost the ability to shapeshift and could never, under normal circumstances, replicate powers as well as other physical forms), with SkrullXavier using his telepathic powers to enslave the rest of the Imperial Guard, Starjammers and Lilandra. 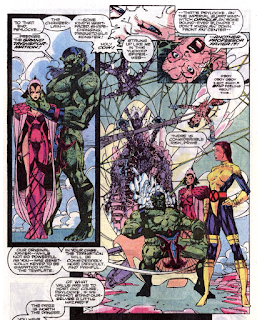 As such, it marks the first actual appearance of Professor X, and not just his Skrull doppelganger, in X-Men since issue #203.

Deathbird experiences a buzzing in her head towards the end of this issue, leading her and Lila to abandoning the X-Men; next issue reveals this is the real Professor X, reaching out to her telepathically.

A Work in Progress
Gladiator rips out Deathbird's wings this issue, eliminating her ability to fly, though I have no idea offhand if that's a permanent change or not. 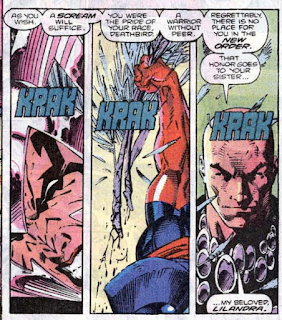 Deathbird claims she is "nearly as strong" as Gladiator; given that Gladiator is generally considered a rough analog to Superman, that seems inconsistent with Deathbird's previously established power level. She also says that she taught Gladiator how to fight, something I don't believe was established previously. 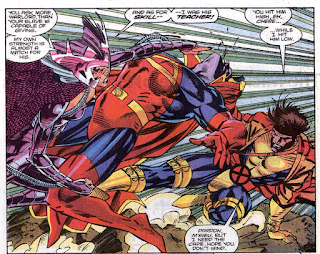 This issue confirms that it was SkrullXavier who defeated the P!yndr champion in issue #265, which led to the decimation of their planet (and other worlds as well).

The Grim 'n' Gritty 90s
Deathbird and Lila show up at the end of the issue, delcaring themselves to be two bad, beautiful babes with really big guns, which is pretty much the 90s in one panel. Claremontisms
Psylocke reminds us again that her psychic knife if the focused totality of her psychic powers.

Artistic Achievements
The panel of Wolverine killing SkrullXavier is classic Lee, and, like John Byrne before him, shows that Lee draws a great Hairy Wolverine.

The Best There is at What He Does, Mon Ami
SkrullXavier says that Gambit's thoughts are like quicksilver (little q), making it difficult to read his min.

For Sale
I'm pretty sure I bought and ate this cereal around this time. 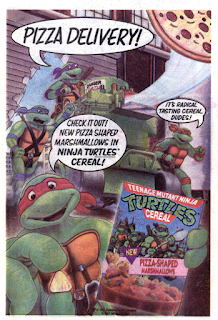 Teebore's Take
In addition to effectively functioning as the middle chapter of this three part space story (which is, really, the only story Claremont and Lee tell featuring a fully assembled and uniformed team of X-Men), revealing the real villains behind the plot and setting up next issue's finale, this issue does a great job in its opening pages of spotlighting the two newest members of the team: Gambit and Jubilee. The latter has been a presence in the book for some time (despite only recently becoming a member technically), but has mostly only interacted with Wolverine & Psylocke, while for the former, aside from his big lock picking moment in issue #272, this really serves as Gambit's first spotlight since his introduction.

It's the first time we've seen the character really functioning as an X-Man, and it's easy to see why he gained such a strong following so quickly, from his banter with Jubilee to his visually exciting power (depicted here more or less as we traditionally think of it, as opposed to his earlier appearances, though still without the playing cards). Even the moment when he intervenes on Deathbird's behalf seems like a subtle shift for the character, as he acts heroically and against his own self-interests (even while he disparages himself for doing so) despite the risk to himself. It's entirely possible this is the moment where Claremont began to rethink his plans to make Gambit an undercover villain (if he indeed ever did rethink that plan), as the action seems out-of-character for someone just biding his time to destroy the team from within. Regardless, it's a reminder that. even here, in the twilight of his decades-long run on the series (and most likely awash with bitterness over his current situation), Claremont still excels at weaving together action and characterization, and that it's a shame we didn't get more of the Claremont/Lee collaboration.

Next Issue
Tomorrow, we look back on the series that was New Mutants. Friday, stuff blows up in X-Factor #66. Next week, New Warriors #9-10.