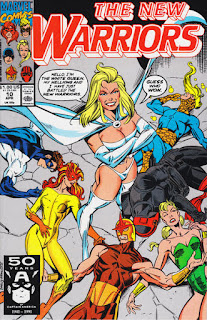 In a Nutshell
The New Warriors fight the Hellions

Plot
Infiltrating the New Warriors' headquarters in the wake of a breach in their computer system, the Hellions attack and subdue Night Thrasher and Silhouette, but not before Night Thrasher manages to alert the rest of his teammates. Prepared for trouble, the rest of the team engages the Hellions in a series of one-on-one battles. Meanwhile, the White Queen telepathically probes Tai's mind, and learns that the data breach was performed by Night Thrasher simply to gain info on Firestar. The two women decide to let the ongoing battle determine Firestar's fate, each hoping to prove the worth of their respective teams. Ultimately, the New Warriors prevail, and White Queen honors her word, allowing Firestar to stay - though Firestar insists she had no intention of doing anything but that.

Firsts and Other Notables
Issue #9 marks the first appearance of a pair of new Hellions, Beef (a typical dimwitted strong guy) and Bevatron (who speaks with a French accent a la Batroc the Leaper and can generate electric blasts), who appear only in this story before popping up in Uncanny X-Men #281 to be killed alongside most of the rest of the Hellions (the pair then returns along with the rest of the team in the later "Necrosha" story). 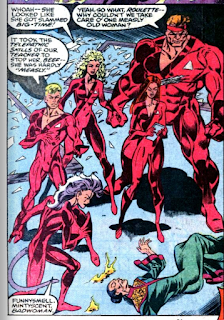 As a result of the New Warriors defeat of the Hellions (and, specifically, depending on how you want to look at it, Firestar's defeat of Bevatron), White Queen relinquishes any claim she has to Firestar, though Firestar rightly makes a point that she doesn't really care what White Queen thinks she has a claim to and will do whatever she wants regardless. 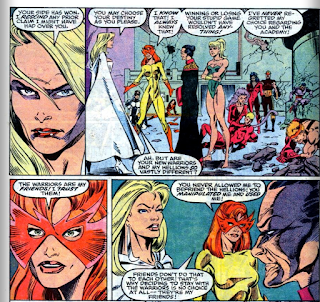 Most of issue #9 deals with the conclusion of a story featuring the Punisher; I included it only for the closing few panels, which setup the Hellions' appearance in the subsequent issue and introduce Beef and Bevatron. The title and credits above only pertain to issue #10.

A Work in Progress
The Hellions involvement in this story revolves around a data breach at the Massachusetts Academy, in which someone was looking for information on Firestar; this occurred in New Warriors #1, as Night Thrasher was recruiting the team. 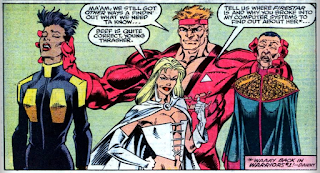 Catseye displays an ability to adopt a transitional, werewolf-like form, much like Wolfsbane, though I don't think we've ever seen that before (previously, she was either full human or full cat). 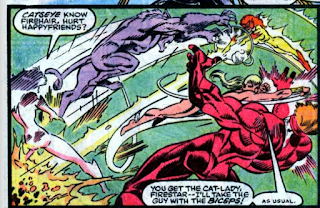 White Queen admits to being affected by her personal feelings toward's Firestar, a reference to the Firestar miniseries which saw her taking a special interest in the girl (albeit for nefarious reasons). 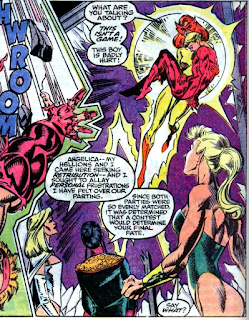 Teebore's Take
From the perspective of the X-books, this story is chiefly notable for introducing two new Hellions, Beef and Bevatron, just in time for them to be killed off along with the vast majority of their teammates in the upcoming Uncanny X-Men #281. But it also represents a rare appearance for the group outside of the X-books while at the same time affirming New Warriors as a sort of honorary X-book, as Fabian Nicieza smartly plays with the history of Firestar to bring in the Hellions and the White Queen (in fact, thanks in part to Nicieza's involvement in both series and their respective initial positions as harbingers of the 90s, New Warriors often reads like a non-mutant counterpart to X-Force), something he'll do periodically again in the future (this won't be the last issue of the series to be examined), leading to the occasional shared storyline between the two books, usually, as in this issue, keying off Firestar and her history with at least some members of X-Force.

Beyond that (and putting aside the bits of characterization and subplot development relevant chiefly only to New Warriors), this story is a pretty decent team-on-team fight. Bagley's art is fluid and energetic, and for the most part Nicieza matches up the teams in fun and engaging pairs. While most such encounters usually end up like this one, a series of one-on-one fights between members of the respective teams, it's always appreciated when such contests are acknowledged as such in-story, as is the case here, with the outcomes of the respective individual matches ultimately deciding the winner of the overall fight.

Next Issue
Tomorrow, "The Promethium Exchange" kicks off in Excalibur #37. Friday, Wolverine hugs a robot in Wolverine #39. Next week, Uncanny X-Men #277.