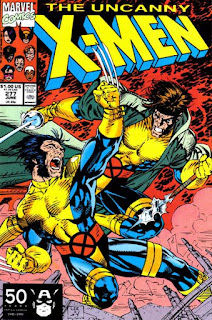 In a Nutshell
Professor X and the X-Men defeat the War Skrulls.

Plot
Banshee, Storm and Forge attack the Starjammers, aided by Gambit, who surreptitiously snuck aboard their ship. The X-Men seem to gain the upperhand, but then Skrull Corsair reveals his true form. Meanwhile, Lila and Deathbird arrive at the asteroid base of the War Skrulls, shocked to find Professor X seemingly alive and well. Wolverine attacks Deathbird, but Lila teleports away before Gladiator can grab her, returning moments later with the entire Starjammer. As it crashes into the asteroid, the X-Men emerge, having defeated the Skrulls posing as the Starjammers, and they proceed to attack the other imposters. Though the X-Men manage to defeat most of the Skrulls, they are ultimately felled by the Skrull Xavier's mental powers. 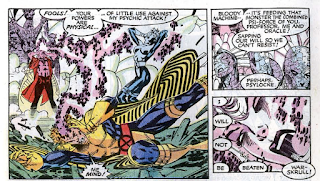 However, the distraction caused and damage done by the X-Men allows the real Professor X to escape, and he pummels the War Skrull both physically and mentally, preventing him from resuming his superior default form. In the wake of their victory, the X-Men are reunited with their mentor, and Professor X learns from Banshee of the looming threat of the Shadow King. Declaring that the Shadow King is the very thing he formed the X-Men to fight, he bids farewell to Lilandra, then returns to Earth along with the X-Men thanks to Lila. Meanwhile, Stevie Hunter is attacked on her way home by Colossus, in the thrall of the Shadow King, who declares that Stevie will guide him through the X-mansion's security systems, or die at Colossus' hands.

Firsts and Other Notables
This issue marks the end of Chris Claremont's last full story in Uncanny X-Men - he writes the following issue, but then only half of the subsequent one, leaving the series before completing the "Muir Island Saga" (though he does launch the new volume of X-Men before leaving the franchise entirely).

Similarly, this is Jim Lee's last issue as the regular penciler of Uncanny X-Men, as he leaves the series to launch adjectiveless X-Men (a book he'll stay on longer than Claremont, thus extending his with the X-Men, albeit across two different series).

Professor X, the real, non-Skrull one, returns this issue, and is properly reunited with the X-Men, meeting their new members (like Jubilee) for the first time. 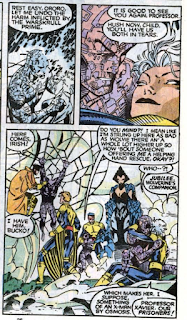 The long-simmering Shadow King subplot finally gets moved into first position by the end of the issue, as Banshee (somewhat suddenly) insists they finally have to address Moira's strange behavior NOW, prompting Xavier to read his mind and realize that Moira has been possessed by the Shadow King, prompting Professor X to leave Lilandra in order to help the X-Men against him. 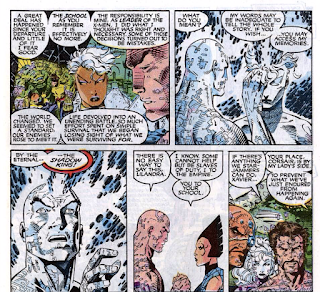 Though she abdicated the throne out of duress, Deathbird willingly allows Lilandra to stay on as the Shi'ar Empress, saying she never really took to ruling, formally putting an end to a reign that stretched back to the first Brood storyline. 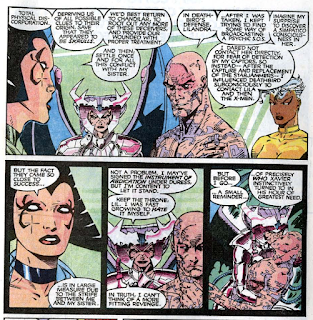 Between Xavier returning to Earth and Lilandra staying on as Empress, this marks the end of their sustained time together (which mostly matches up with Deathbird's reign). Though they remain romantically involved and future stories will reference that on occasion, this more or less marks the end of any kind of sustained relationship between the two.

Setting up the "Muir Island Saga" beginning next issue, Stevie Hunter (last seen at the start of "X-Tinction Agenda") and a Shadow King-possessed Colossus (last seen riding off into the sunset, so to speak, with Calliso in issue #264) appear on the final page (this also affords us our first look at Jim Lee's Colossus). 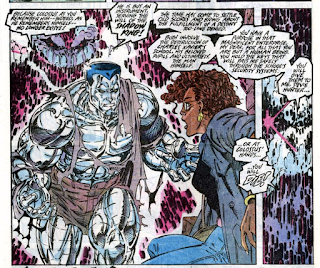 A Work in Progress
Both last issue and this one the X-Men are seen using a variety of high-tech equipment (in true Jim Lee style) said to be created by Forge, though the relative quick passage of time in this story isn't entirely consistent with how his power has been depicted in the past, in which he could invent anything, but it usually took some time.

This issue confirms that Professor X has been telepathically reaching out to Deathbird, using her to have Lila summon the X-Men for help.

Professor X declaring that he attacked the War Skrull both mentally and physically, preventing him from reverting to his larger, stronger form, reads like another instance of Claremont using dialogue to cover-up deficiencies in the art (ie the question of why the Skrull was defeated by being punched by an old, recently-held-captive-for-months human). 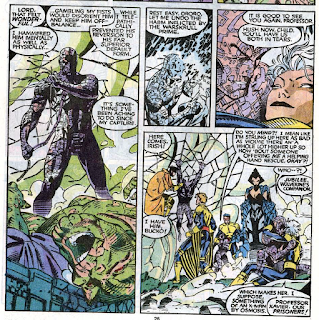 The Best There is at What He Does, Mon Ami
Gambit intervenes on Banshee's behalf, noting that he has yet to learn Banshee's secrets, a possible nod at his one-time intended role as a double agent. 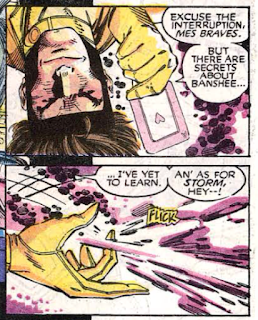 In another (legitimately) kewl Gambit moment, he attacks Gladiator using a full deck of cards. 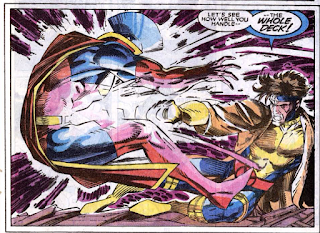 For Sale
In a somewhat eyebrow raising sign of the times, this issue contains an ad for a "Operation: Desert Storm"-themed RPG. 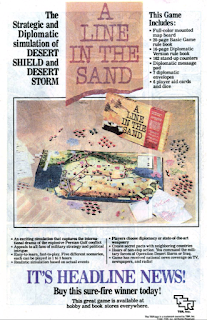 There's also a teaser ad for The Rocketeer, still one of my favorite comic book movies. 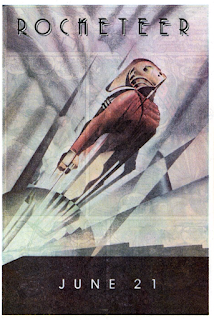 It's in the Mail
This issue's letter column formally announces the upcoming launch of the second X-Men book.

Teebore's Take
The little three part Shi'ar story which began in issue #275 concludes here, in a mostly perfunctory way, with the X-Men ultimately prevailing against the Skrulls (mostly off-panel) and Professor X (the real one, this time) getting to deliver the final blow (which makes for a nice reintroduction to the series). Ultimately though, this is a story that is defined by the circumstances swirling around it: it is Chris Claremont's last full story for Uncanny X-Men, it features the last issue of the series drawn by Jim Lee, and it stands as the only complete Claremont/Lee story featuring this particular iteration of the team - most of their prior collaboration occurred first during the "non-team" era and then was concerned mostly with setting up this team, and by the time the two creators reunite for X-Men (volume 2), they'll have a bigger, different roster to play with. As a result, this story rises above it's somewhat pedestrian trappings, gaining something simply for being the only peek we're ever given at what Claremont and Lee could have done with a more traditional status quo.