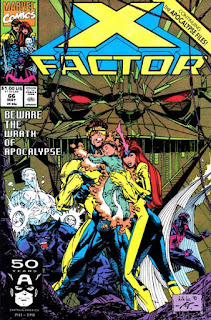 In a Nutshell
Ship is destroyed as Askani arrives to protect Cyclops' son.

Plot
An out-of-control Ship is attacking New York, with the city's heroes fighting back to protect the inhabitants. Inside, Jean realizes that Ship is infected with some kind of virus, just before Harrddrive knocks her out. Meanwhile, Foxbat attempts to abduct Cyclops' son, but he's stopped by a mysterious woman who claims to be the child's protector. However, when X-Factor arrives, alerted to the attack by Ship, they misunderstand and attack the woman, allowing Foxbat to teleport away with Christopher. With Ship's attacks intensifying, Beast insists they need to treat the disease, not just the symptoms. Outside, Charlotte Jones and a group of cops try to enter Ship, but only Charlotte gains access. Meanwhile, Beast is able to access Ship's program through a hard wire linkage, and they deduce that the infection is the work of Apocalypse. 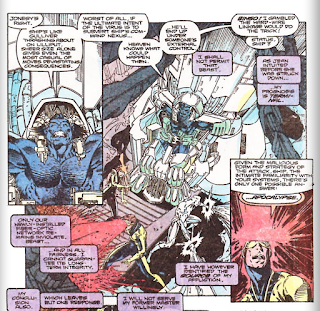 Unwilling to be his slave once more, Ship launches into the sky, determined to blow himself up. Cyclops argues that doing so is just giving Apocalypse what he wants, but Ship is unable to stop the self-destruct process, and Cyclops tells Beast to find a way for all of them, including Ship, to survive. As the rest of the team fight back against the metal tendrils caused by the infection, Beast and Ship race to find a way to save everyone, until time expires, and Ship explodes. From the city below, the mysterious woman watches the explosion, lamenting the loss of X-Factor, before vowing to save Christopher from Apocalypse, no matter the cost.

Firsts and Other Notables
Ship is destroyed this issue, shortly after he launches himself into space in order to prevent being enslaved once more by Apocalypse, thus ending his tenure as X-Factor's headquarters. However, next issue will reveal that Ship's program temporarily survived the physical destruction of his form, and later stories will bring him back in various forms, to varying degrees. 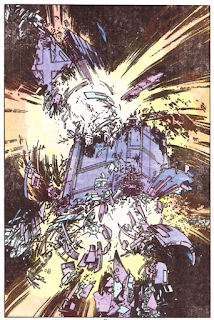 This issue marks the first appearance of Askani (unnamed in this issue). Presented in this story as a singular individual by that name sent from the future into the past to protect Cyclops' son from Apocalypse, later stories will established that "Askani" is actually the name of a cult of warrior women from the distant future tasked with protecting and raising Cyclops' son into Cable, and that the woman here is but one of their number.

Here, Askani says that Christopher is destined to lead his people against the foe who savaged our father, which more or less fits with the later revelations that Cable is destined to defeat Apocalypse once and for all. She also refers to Christopher as "little brother" implying a blood relation, though this is later confirmed to be merely a metaphoric relationship and not a blood one. Like Cable, Askani appears to have a bionic eye (though's Cable's eye is later attributed to the techno-organic virus his younger self will soon become infected with). 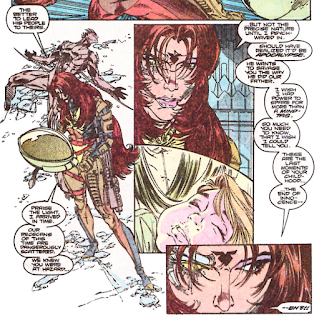 However, even later in the evolution of Cable's backstory and the Askani, it's revealed that the Askani itself is founded by Rachel Summers, who will eventually be flung into Cable's future, eventually becoming known as "Mother Askani". In what is surely just a coincidence, Askani in this issue has a facial tattoo that's not unlike the Phoenix symbol, and her oath of choice is "Bright Lady", a reference to the Phoenix-empowered Rachel that will later be used by Cable as well.

This issue contains two more Apocalypse Files pinups/text pieces, one for Iceman (who is drawn with his inhibitor belt even though Portacio has yet to draw it in an actual story) and one for Beast (whose analysis by Apocalypse, which says that if not for Xavier, Beast may have become much more closely aligned with Apocalypse, unintentionally hints at Dark Beast from "Age of Apocalypse"). 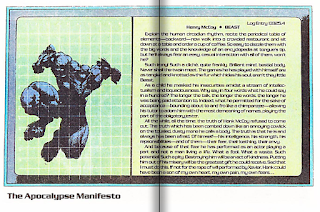 Members of the Avengers and Fantastic Four, as well as She-Hulk, are seen fighting back against Ship's out-of-control attack on the city. 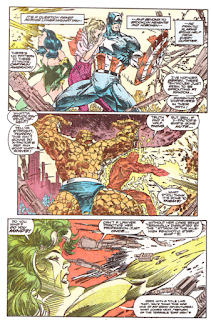 Though not called as such in this issue, by the appearance of the tendrils and whatnot, Ship has clearly been infected with the same techno-organic virus Apocalypse will later infect Cyclops' son with. 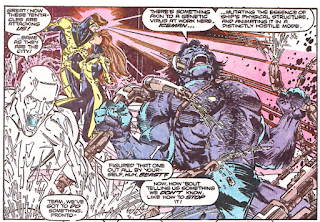 On page 15, dialogue spoken by Beast is wrongly attributed to Gauntlet by the speech bubble. 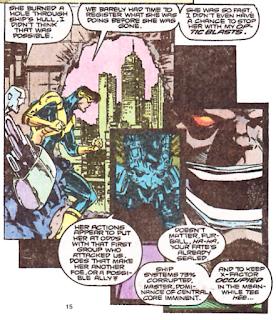 A Work in Progress
One of the cops with Charlotte refers to mutants as "moots", a term I don't think ever gets used anywhere else (Charlotte chides him for using it).

Charlotte is allowed access to Ship despite the barrier that prevents humans from entering; it's never outright stated, but this is likely due to the infection of Ship's systems at that point. 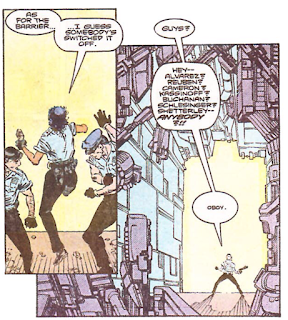 Charlotte's received a promotion, and she & Archangel are openly chummy with each other, with Charlotte calling him "Wings". 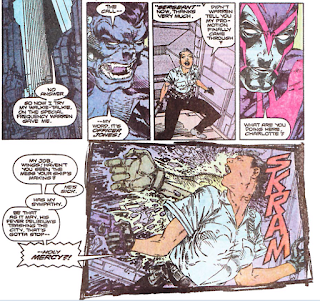 Build Up Your Vocabulary with Beast: Perspicacious


/ˌpərspəˈkāSHəs/. Adjective. Having a ready insight into and understanding of things. 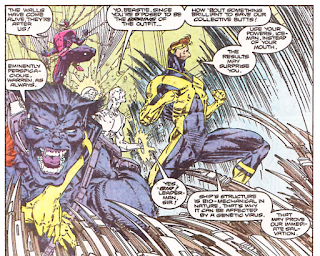 Teebore's Take
There is perhaps no single image that better sums up the intent of this story than the single page spread of Ship blowing up, robbing X-Factor of their now-longtime friend and headquarters, and while it's difficult to read this story and not see some of the behind-the-scenes gears moving it along, it's also hard to see that page, the culmination of a tense sequence in which X-Factor races to prevent Ship's destruction, and not get a sense that something big and epic is happening. Hindsight tells us that something significant is indeed on the horizon for these characters and this book; but the events of this issue and the way they're depicted create that sensation regardless.

But with two chapters left in the final self-contained story featuring the original X-Factor team, this issue isn't just concerned with (literally) blowing up the book's central setting as it prepares to morph into something else. It also does a lot of work setting up another status quo change: the fate of Cyclops' son. Given it would be several years before the link between Nathan Christopher and Cable would be confirmed, it's remarkable just how many of the hints and teases dropped here fit with Cable's later-established backstory, from the look of the Askani woman to her interactions with Christopher to even the way she talks and curses. With all the creators of this issue gone by the time that link and all that backstory is established, it would have been easy to excuse big contradictions between the hints here and what's later revealed, but to the credit of those later creators, it all mostly adds up. For readers at the time, this issue contains some intriguing teases of a larger fate for Cyclops' son. For readers looking back, it's a remarkably consistent beginning to a compelling (albeit oft-convoluted) tale.