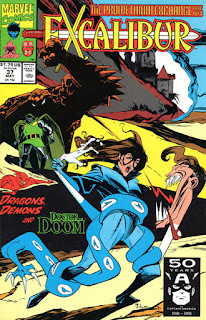 "House Call: Book One of The Promethium Exchange"
May 1991

In a Nutshell
Dr. Doom tricks Kitty into taking him to Limbo.

Plot
As Meggan is making the rest of the team breakfast, Dr. Doom arrives, seeking Kitty's help in traveling to Limbo to acquire a metal known as promethium, which could provide inexhaustible energy to the world for all time. Excalibur is suspicious, but Doom allows Rachel to read his mind and she discovers no presence of real evil, so Kitty agrees to help. Drawing Illyana's Soulsword, Kitty opens a portal to Limbo and, with the help of Dr. Doom's sorcery, travel there, followed surreptitiously by the rest of the team. In Limbo, the pair is attacked by demons, and Doom grabs the sword from Kitty, fighting them off but revealing that he only intends to provide the promethium to the countries which swear allegiance to him. 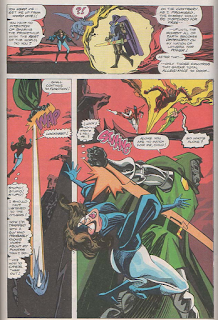 On Earth, the west coast branch of the Avengers are approached by the Lady of the Lake, the guardian spirit of England, who, believing Excalibur to be Doom's unwitting pawns, asks for their help in stopping him and preventing the destruction of England. Back in Limbo, the rest of Excalibur comes to Kitty's aid, attacking Doom. He is able to fight them all off, save for Captain Britain, who battles him to a standstill, until the pair are interrupted by demonic doppelgangers of the Fantastic Four, Avengers, and X-Men.

Firsts and Other Notables
This is the first part of "The Promethium Exchange", a three-part story featuring Dr. Doom.

In addition to Dr. Doom, the West Coast branch of the Avengers, at this time comprised of Iron Man, Scarlet Witch, Wonder Man, Quicksilver and Tigra, appear briefly in this issue, called into service to help Excalibur battle Doom by the Lady of the Lake, citing Iron Man's past encounters with Doom (in Iron Man #150 and #250, respectively). 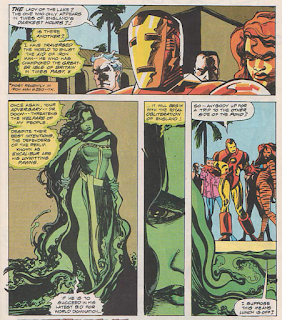 Nightcrawler is seemingly cured of his teleportation limitations this issue, once more able to teleport multiple times in succession without suffering any physical strain. 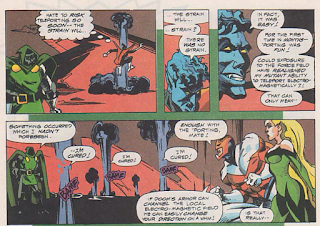 Both Dr. Doom's role in saving Kitty's life following "Mutant Massacre" (from the Fantastic Four vs. X-Men limited series) and Kitty's role as the heir to Illyana's Soulsword, post-"Inferno", are referenced in this issue.

The Chronology Corner
Dr. Doom appears in this story between his appearance in Avengers #331 and Fantastic Four #350.

The West Coast Avengers appear between issues #74 and #75 of Avengers West Coast.

A Work in Progress
Meggan says she's never cooked breakfast prior to this issue.

Nightcrawler references being Meggan's tutor, something that hasn't been brought up in ages.

Rachel reads Dr. Doom's mind, and claims she doesn't see any real evil. I'm certainly no Doom expert, and I know he's generally portrayed as someone who wants to rule the world for its own benefit, but I have to imagine that doesn't entirely gel with at least some things he's done in some stories through the years. 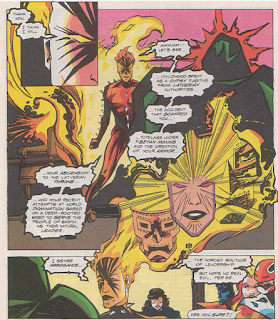 The dimensional tuner Kitty created during "The Cross-Time Caper" is used to help Excalibur, via Widget, follow Kitty and Doom to Limbo.

Doom rightly points out that the demonic Limbo Illyana once ruled isn't the true Limbo, as time passes there (however erratically relative to Earth time) and beings exist within it, not just shades.

Teebore's Take
Let's get this out of the way first: the art in this issue is terrible. Charitably, it could be described as "stylistic", but really, it's just a gangly mess, with characters and objects depicted in an almost abstract style, with little page-to-page or even panel-to-panel consistency in the figure work, all of which makes the whole thing borderline unreadable. The story, however, isn't half bad. Bringing in a villain from outside the series' usual rogues gallery is a pretty standard move for a fill-in story (see: Arnim Zola last issue), but Lobdell gets extra points for using one that has some shared history with the title characters. The plot also draws on the history of the series, if not resolving then at least acknowledging (and using) one of the series many lingering plot threads in bringing back Illyana's bequeathed-to-Kitty Soulsword.

The presence of the West Coast Avengers (in a setup for a presumably larger role in future chapters of the story), as well as Doom, also continues Lobdell's admirable (but odd for a fill-in run) efforts to connect Excalibur to the larger Marvel Universe, moving the series out of the insular X-world a little bit more. The titular promethium, at this point, feels like little more than a MacGuffin, and Doom's sudden interest in getting to Limbo has a vaguely Macguffin feel to it as well (why NOW is he suddenly conning Kitty into taking him to Limbo?),but otherwise, this is a surprisingly strong start to a fill-in story. If only the art was better..