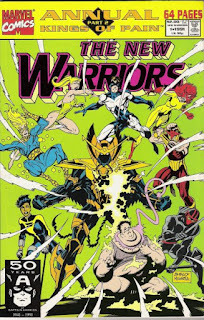 In a Nutshell
The New Warriors fight X-Force, then team-up with them.

Plot
At the Genetch lab, the New Warriors and X-Force battle one another, until a pair of Genetech executives intervene, and it's revealed that the entire confrontation has been a setup. In Alaska, Harness and Piecemeal attack an oil refinery, where Piecemeal absorbs more ambient energy, growing larger in the process. Meanwhile, the New Warriors and X-Force have teamed up, splitting into three mixed teams. The first team, led by Cable, pretends to break Frenzy out of jail in order to learn more about who hired the Alliance of Evil, and she gives them the address of a Brooklyn warehouse owned by one of the dummy corporations. A second team breaks into the warehouse and learns it is truly owned by AIM, and that they're creating humanoid casings designed to hold some kind of energy. Meanwhile, the third team returns to Xavier's mansion, where they use Cerebro to learn that the information AIM has on the energy being absorbed by Piecemeal came from Muir Island. Reconvening at Genetech, the two teams put the pieces together and realize that AIM is using Harness and Piecemeal to gather energy which they intend to put into the casings, energy which originated in Scotland and came into being when Moira MacTaggert's son died; AIM is trying to recreate Proteus.

Firsts and Other Notables
Whereas in New Mutants Annual #7, the New Mutants were never directly or indirectly referred to as "X-Force", that practice ends here, with the "previously in" notes on the title page referring to the group collectively as such, as well as the characters using the term in-story. 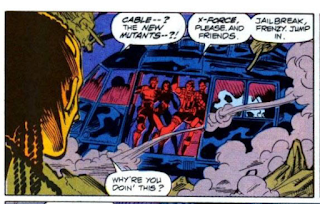 Cable knows the New Warriors' Chord (who, as I understand it, is one of that series' token "characters with a mysterious past and surprising connections to other random characters), referencing a past adventure in Africa. While I don't think the specific history with Chord is ever referenced again, the eventual reveal of Cable's time as a mercenary certainly allows for possible African adventures in his past.

This issue reveals that Harness and Piecemeal were hired by AIM to reclaim the scattered energy of Proteus, with the goal of recreating the villain, making this storyline one of the few instances (a subplot of "Necrosha X" being another) to feature Proteus as a villain outside the initial story which introduced, then dispatched, the character. 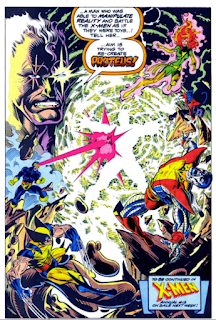 Creator Central
Future Spider-Man writer and all around Marvel bigshot Dan Slott writes one of the backup stories in this annual, all of which retell the origins of the various New Warriors.

Unlike the other three covers of this storyline, Mark Bagley rather than Mike Mignola draws the cover, though Mignola does ink it which, combined with the repeated staging, helps the whole thing still feel like a part of the whole.

A Work in Progress
Shatterstar's eye can be seen flashing when he's using his power, another hint at a Longshot connection. 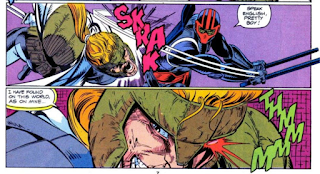 Nicieza's doesn't seem to know quite what to do with Domino yet, as she spends most of the last chapter and this one piloting a helicopter and/or relaying intel to Cable.

He does make some effort to sell the idea of X-Force being a more extreme superhero team, with at least a few New Warriors commenting on their relative intensity. 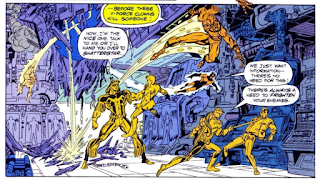 The New Mutants return to the X-Mansion briefly to use Cerebro; Sam mentions that the locks have been changed, though I'm not sure who would have done that (as the X-Men have been in space since the New Mutants left and this story takes place before "The Muir Island Saga". 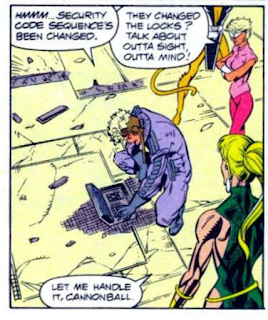 Boom-Boom is somehow able to use Cerebro and is good with computers, though to Nicieza's credit, the characters express their surprise at this in the issue itself. 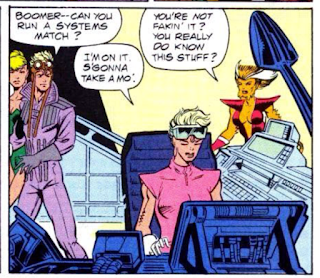 Sam is now able to extend his blast field to the extent that it acts as a force field capable of protecting the entire team, even when not blasting.

The Cable Guy
Chord refers to Cable as "Winters", another "throw out a bunch of vague mysteries and see what sticks" approach to Cable. 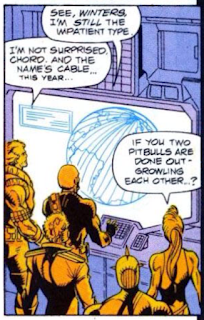 The Grim 'n' Gritty 90s
Boom-Boom drops a "not!" where Warpath pretends like X-Force is in the know. 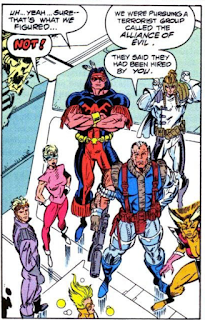 Teebore's Take
I feel bad for any New Warriors fans picking up this issue, as its the second chapter in what is very clearly an X-focused storyline. There's the standard "heroes fight, then team-up" routine, and with the two teams broken into groups, there's a pretty even divide between New Mutants and New Warriors in each group. But other than that, this is entirely the New Mutants' story (at this point), with the New Warriors essentially guest-starring in their own annual: the Alliance of Evil are old X-villains, the X-Mansion gets a drop-by, and the ultimate goal of the whole storyline is revealed to be the resurrection of one of the X-Men's all-time greatest villains. We never even see the New Warriors' headquarters in this issue. The end result is that New Warriors feel even more shoehorned into this storyline than the Fantastic Four did in the previous year's "Days of Future Present" (where at least the connection between Franklin Richards and Rachel helped the FF stay relevant throughout).

Beyond that, this issue spends a little bit of time highlighting how "X-Force" (now being referred to as such in-universe) is more extreme than even the New Warriors, with the Warriors raising some eyebrows at X-Force's take-no-prisoners approach to combat as well as their interrogation techniques. It smacks a little bit of telling-not-showing, as their actions remain not too far removed from the standard superhero fare (or at least it seems that way now, looking back from a time when X-Force's methods are perhaps not so different from teams like the Avengers), but the effort on Nicieza's part to sell the idea that X-Force is more than just the New Mutants with a bunch of new members is nonetheless appreciated.

Next Issue
Tomorrow, the story moves to Muir Island in X-Men Annual #15, then concludes in X-Factor Annual #6. Next week, Excalibur guest-stars in She-Hulk #26.