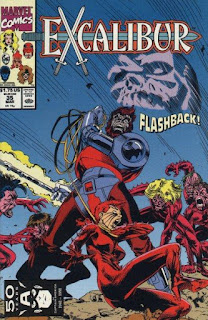 In a Nutshell
Phoenix battles D'Spayre

Plot
In the wake of the kidnapping of a young girl named Amy, Excalibur is participating in the city-wide search for her. With a suspect, Gunther Gyles, in custody, Rachel agrees to help Inspector Thomas interrogate him, though Rachel refuses to simply rip Amy's location from his mind telepathically. But when Gyles insists he has no memory of where Amy is, Rachel enters his mind and is violently repulsed by some kind of other-dimensional psychic entity that has taken over Gyles mind. However, she did learn that Amy is being held in an abandoned building on the moors, and she telepathically informs the rest of the team so they can begin searching possible locations. 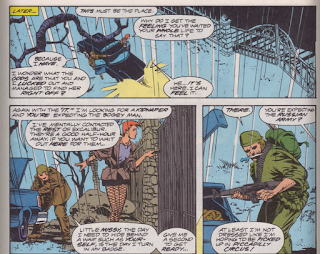 Later, Thomas and Rachel arrive at the first location on their list, and Rachel immediately senses the familiar malevolent presence. Flying off on her own, she finds herself back in her original timeline, a thrall of Ahab, and is forced to relive her hunting down of Nightcrawler. As Rachel collapses, the villain behind Amy's kidnapping, D'Spayre, reveals himself. He attempts to feed off Rachel's despair, but Rachel is instead filled with disgust at what she did, enabling her to attack D'Spayre while Inspector Thomas locates Amy in a nearby well. D'Spayre almost overwhelms Rachel, but Amy's hope reinvigorates her and causes D'Spayre to flee back to his home dimension.

Firsts and Other Notables
Future Uncanny X-Men writer (and eventual chief X-book architect) Scott Lobdell writes this issue, kicking off a run that lasts until Alan Davis returns with issue #42. I'm not sure if Lobdell was technically assigned the title during this period or if his run is just technically a series of fill-ins, but given the rotating artistic teams during it, I believe it's generally considered the latter. He'll return to the book again after Davis leaves for a proper, official run, during which he'll tighten the continuity between Excalibur and the rest of the X-books, leading to the series being involved in the linewide crossovers for the first time.

D'Spayre, the demonic entity whom Cyclops battled in X-Men #144, is the villain of this issue. 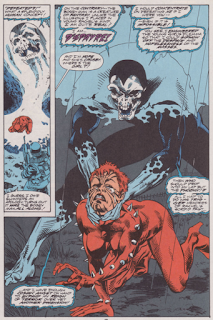 Ahab, the Master of the Hounds from the "Days of Future Past" timeline who first appeared in the "Days of Future Present" storyline, is referenced in Excalibur for the first time (via one of Rachel's D'Spayre-induced hallucinations). Ahab will later end up being revealed as the future incarnation of Excalibur supporting cast member Rory Campbell. 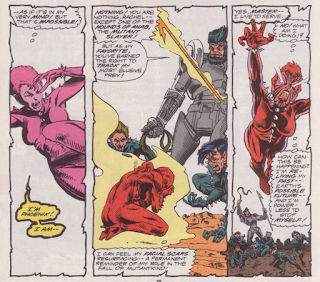 Rachel's recollections of her timeline reveal that Nightcrawler eventually led the European resistance to the Sentinels' rule, and we learn that Rachel is personally responsible for his death in that timeline - which conflicts with her recollections in X-Men #188 that he died during the government's attack on the X-Mansion (a discrepancy explained by the fact that Rachel's memories are a jumble as a result of her trip through the Mojoverse between X-Men #209 and Excalibur Special Edition). 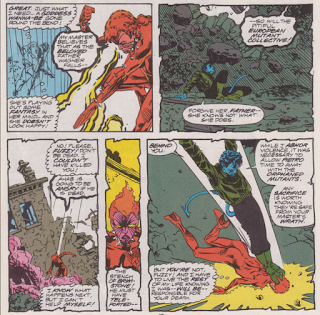 A Work in Progress
The search for Amy has postponed a welcome back party Excalibur was going to throw for Kitty, following her reunion with the team last issue.

Prompted by Rachel's refusal to telepathically rip Amy's location from Gyles' mind, Thomas gives her a speech reminiscent of the "what have you done for the black people?" line in the O'Neil/Adams Green Lantern/Green Arrow book.

Teebore's Take
Whether this is the start of an official Scott Lobdell run, or just a lengthy run of fill-ins, it begins on a strong note, at least relative to the quality of the other fill-ins that preceded "Girls School from Heck". Dave Ross, who provided art to two of the better such fill-ins, is solid (though of course Milgrom is on hand, doing his best to Milgrom-up the art), and the story works because its chiefly built around the relationship between Dai Thomas and Rachel (two characters who haven't shared much page time together, but given Thomas' established disdain for superpowered folks and Rachel's relatively laissez faire attitude towards her own powers, the conflict between the two is enough to drive the story). Plus, it's nice to see Excalibur doing some generic superhero work by participating in the city-wide manhunt for Amy. D'Spayre's method of attack basically boils down to the usual "scare you with your worst fears" routine, but seeing Ahab referenced in this series for the first time is a nice touch, as is the extra element brought to their fight by the (unstated) history between D'Spayre and Rachel's father. Certainly, this is hardly essential reading, but as a standalone/fill-in story and/or the start of a placeholder run, it's miles better than much of what the series has been putting out for the better part of a year now.

Next Issue
Tomorrow, Wolverine goes back to the future in Wolverine #37. Next week, the X-Men, in space! In Uncanny X-Men #275, followed by the finale of New Mutants in New Mutants #100.