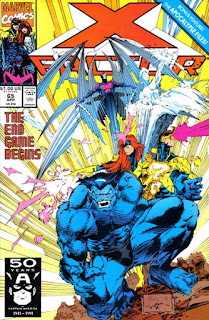 In a Nutshell
Apocalypse sends his Dark Riders against X-Factor & Ship.

Plot
Following a brief hiccough in Ship's systems, Cyclops leads X-Factor in a training exercise which is watched, unknownst to them, by Apocalypse and his new team of henchmen, who are told that their target is not X-Factor, but rather Ship. After the training session, Archangel visits Charlotte Jones and Iceman visits Opal, while Cyclops expresses his dissatisfaction with the team's performance to Jean, telling her he doesn't want any more of his friends and teammates to die. Later, as Cyclops and Beast are discussing the results of Beast's diagnostic on Ship, Apocalypse's henchmen crash their ship into Ship and proceed to attack X-Factor. 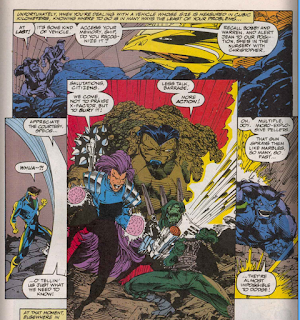 One of the henchman, Psynapse, attacks Jean telepathically, causing her former telepathic abilities to resurface. Helped in part by their re-established psi-link, X-Factor defeats the intruders, but in the wake of their victory they discover that the enemy vehicle is burrowing cables into Ship, and that Ship is unresponsive. One of Apocalypse's henchmen, Harrdrive, then reports to his gleeful master that the infiltration of Ship has began, and that he's proceeding with the infection of Ship's primary cybernetic core. With his defensive systems down and higher cognitive functions inhibited, barring any unforseen countermeasures, Ship's prognosis is terminal.

Firsts and Other Notables
With Simonson gone, Chris Claremont is brought in to script the series over a plot by Portacio and Claremont's X-Men collaborator, Jim Lee. Claremont & Lee only stick with the series through the end of this story in issue #68, ceding first to Fabian Nicieza and then incoming regular writer Peter David for the series' contributions to the "Muir Island Saga". With Portacio already slated to take over Uncanny X-Men after Lee launches the second X-Men title, Claremont reportedly took this gig to get a feel for Portactio's art before working with him regularly on Uncanny, though, of course, that effort is ultimately wasted.

Though the text is coy and isn't confirmed until later issues, Jean Grey effectively regains her telepathic abilities this issue, part of the general "back to basics" movement going on in the X-Books in anticipation of the impending linewide relaunch. The exact mechanics of how is a little unclear (it involves Psynapse monkeying around in her head and triggering a memory of the first time her telepathy emerged, when her friend Annie Richardson died in childhood), but the long and the short of it is that Jean is telepathic again, after a (somewhat remarkably) long time without it.

In the style of the Xavier Files from Sienkiewicz-era New Mutants issues, this issue features excerpts from the Apocalypse Files (or Apocalypse Manifesto, as it's called inside the issue), pinups of the team with text written by Fabian Nicieza in Apocalypse's voice discussing the characters (this type of thing got really hot in the X-books around this time; next issue will include some more installments, early X-Force issues will do a similar thing, and eventually we'll get entire special issues in this style).  Here, Archangel, Cyclops and Marvel Girl are covered, and notably, the Twelve, not mentioned since issue #14, are referenced in the Cyclops entry, with Apocalypse describing the group as being either the saviors or destroyers of mutantkind (“the archetype beings that will one day save or damn mutantkind.”), though he himself was shown to be one of the group in #14. Unfortunately, I couldn't find any good scans of the pages online.

Though unnamed, this issue marks the first appearance of the Riders of the Storm (later called the Dark Riders), Apocalypse's latest group of henchmen (no indication is given as to where they came from or why Apocalypse is no longer creating Horsemen, but future issues of this story will shed some more light on their origins). Like the MLF, the Dark Riders will be recurring villains throughout the 90s, serving various masters in that time, though their designs are quirkier and more outlandish than the MLF (which may account for their relative staying power, given they're non-entities in terms of characterization). They consist of Gauntlet, Barrage, Tusk, Psynapse, Foxbat, and Harddrive (one of whom, Tusk, eventually receives his own action figure). 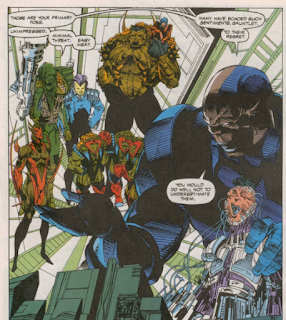 Apocalypse returns this issue as well, though as with his most recent appearances in the book, at this point he merely hangs out, watching from afar and delivering monologues. 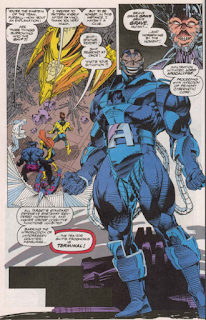 Both Opal and Charlotte Jones appear in this issue, in scenes with their respective boyfriends. Charlotte Jones will actually get drawn deeper into this story as it progresses (Claremont, who used her in X-Men #264, clearly has an affinity for the character), but this is the last time Opal will appear in X-Factor (she will pop up again later in Uncanny X-Men after Iceman rejoins the team). 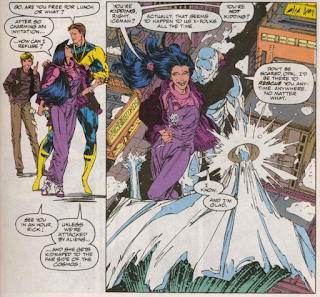 As in issue #63, Ship experiences another hiccough, one which is implicitly linked to Harddrive's intrusion into Ship's systems, a subplot that pays off next issue. 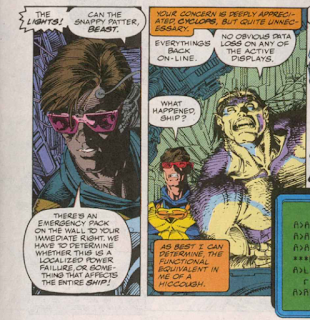 In a bit of setup for X-Factor's upcoming re-absorption into the X-Men, Beast notes that he finds himself thinking of himself still as one of the X-Men, and wonders if the others do the same.

The Statement of Ownership in this issue lists the average sales per month in the preceding twelve months as 268,307 copies, with the issue nearest the filing date selling 228,800 copies.

A Work in Progress
Referencing the end of X-Men #273, Cyclops notes that with the X-Men offworld, it's up to X-Factor to continue the fight for Xavier's dream. 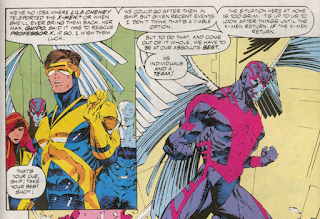 Apocalypse tells the Dark Riders their mission is to punish Ship for his betrayal, though Apocalypse gave Ship to X-Factor in issue #25 (granted, with the intent that it would destroy them, so maybe its failure to do so is the betrayal he's referencing).

Build up your Vocabulary with Beast: Ablutions
(əˈblo͞oSHən). Noun. The act of washing oneself (often used for humorously formal effect). 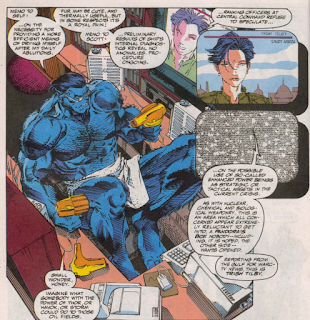 The Grim 'n' Gritty 90s
It's implied that Trish Tilby is covering the Gulf War, and Beast is recording her broadcasts on VHS tapes.

It's in the Mail
Responses to letters in this issue mention that Peter David will soon become the book's new regular writer and also reference the aborted Scott/Jean wedding plans, saying events in the X-books have caused it to be postponed.

Teebore's Take
Though it doesn't get a special double-sized anniversary or finale issue, this month's X-Factor is still a relatively significant one, giving Chris Claremont his first opportunity to script the original X-Men as a group, bringing back Apocalypse, and kicking off the final self-contained story featuring the book's original cast, a story that stands as one of this iteration of the series' best, and one which will have a significant impact on the course of the X-books down the line. Reading a bit like the issue that should have followed immediately after "X-Tinction Agenda", with the team refocused and rededicated to their purpose, Portacio, Lee and Claremont take a while to ramp things up, wisely checking in with the book's supporting cast while allowing the tension triggered by the impending attack to mount (it would have been all two easy for all three of them to simply ignore Opal, Charlotte and Trish and dive right into the action). The Dark Riders are certainly not significant enough characters to warrant the attention (or action figures) they get in the 90s, but they work perfectly well as cannon fodder/Level 1-style villains, pseudo-Horseman heralding the arrival of Apocalypse (more or less the book's biggest, most significant villain at this point), looming once more at the edges. It's a strong start to what will be a solid (though far from perfect) story, one which feels important even beyond knowing this is the beginning of the end for this iteration of the series.