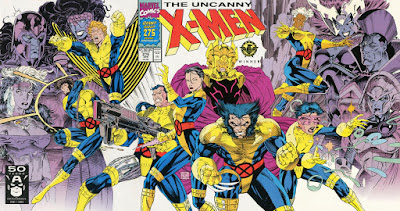 In a Nutshell
The X-Men help Lilandra reclaim her throne while Rogue & Magneto defeat Zaladane.

Plot
The Starjammers board Deathbird's flagship and encounter the Imperial Guard. In the ship's lower decks, the X-Men take advantage of the distraction to free themselves from Deathbird's manacle pet. Pursuing Deathbird, the X-Men encounter Lilandra, and join the fight against the Imperial Guard. In the wake of their victory, the X-Men are introduced to the Shi'ar warlord, who turns out to be Professor X. In the Savage Land, the SHIELD force prepares to assault Zaladane's citadel, but Colonel Semyanov betrays them, blasting Magneto out of the sky as Zaladane's air force attacks. Crashing in the jungle, Rogue is reunited with Ka-Zar and Nick Fury, the only apparent survivors of the attack, and they proceed to the citadel. Meanwhile, Zaladane begins the process of transferring all of Magneto's power to herself. Sneaking inside, Rogue, Ka-Zar and Nick Fury interrupt the process, freeing Magneto as they battle the Mutates. 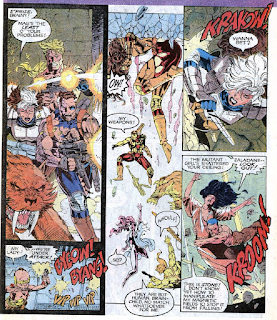 His power restored, Magneto slays the traitorous Semyanov, then turns to Zaladane. Over Rogue's objections, he says that he is not Charles Xavier, and was a fool to try being him, then kills Zaladane. He flies off, leaving behind a saddened Rogue. On the Shi'ar capital of Chandrilar, Lilandra is crowned Empress in the wake of her defeat of the captive Deathbird, and the X-Men celebrate, though Jubilee is unnerved by the alien surroundings. Wandering the halls of the palace, she encounters Gladiator and Oracle of the Imperial Guard being tortured by a shadowy figure. Joined by Gambit, who pulls her deeper into hiding, they watch as the figure orders Deathbird's execution then declares that the X-Men will make excellent breeding stock, after which they'll be destroyed, revealing himself as Professor X.

Firsts and Other Notables
The X-Men are reunited with Professor X in this issue, appearing in the series for the first time since issue #203, and he is revealed to be the Shi'ar champion/warlord mentioned in passing in past issues. This also marks Xavier's first interactions with newer members Psylocke, Forge, Gambit and Jubilee (though next issue reveals this Xavier to be an impostor, so technically, none of that is true yet. But we're meant to think it's true as of this reading). 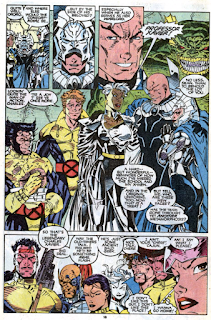 Magneto formally steps off the path of the X-Men this issue, killing Zaladane and Colonel Semyanov, saying that he is not Xavier and was foolish to think he could be. 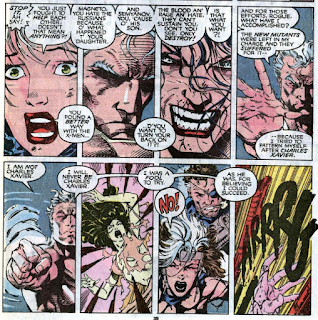 This issue features a triple gatefold cover, with the X-Men in the center flanked by the Savage Land characters on one side and the Shi'ar characters on the other, making this, I believe, the first "gimmick" cover of the series (though certainly not as egregious a cover as some of the later gimmick covers will be).

Rogue's powers, including her Ms. Marvel-absorbed powers of super-strength, flight, and invulnerability, return this issue, the idea being that the work Magneto did on her in issue #269 simply took longer than he expected to take effect. 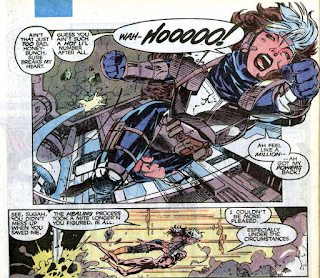 Magneto is revealed to have encountered the Shadow King in the past, in what is likely meant to be a setup for Claremont's planned big Xavier/Magneto/Shadow King showdown in issue #300, an encounter which obviously never occurs, leaving whatever Claremont had in mind for their history together as one of the more notable danglers from his run. 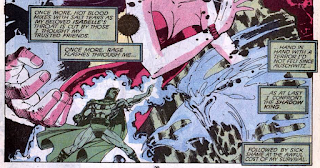 Echoing the idea first suggested in one of the "Cross-Time Caper" installments of Excalibur, Magneto also implies that the Shadow King is the true force behind the Hellfire Club (hence his moniker).

Lilandra is re-crowned Empress of the Shi'ar following her defeat of Deathbird this issue, ending Deathbird's reign (which began when she usurped the throne from Lilandra during the first Brood saga).

As far as I know, Magneto's killing of Zaladane has stuck, and the character has yet to return in any capacity.

The masthead receives an update this issue (I don't think it sticks around for long):

A second printing of this issue was released, with the logo colored gold.

A Work in Progress
In a subtle callback to the opening of issue #265, narration reveals that the alien P!ndyr (whose champion we saw defeated in that issue) are now serving as Shi'ar shock troops.

The X-Men make rather short work of the Imperial Guard in this issue, essentially defeating them in three pages (two of which are a double page spread). Narration explains that the combination of the P!ndyr troops and the Shi'ar warlord's psychic abilities helped, but it's still a rather ignoble defeat for a group of characters who overwhelming defeated the X-Men in one of their worst losses (at the end of "The Dark Phoenix Saga"). 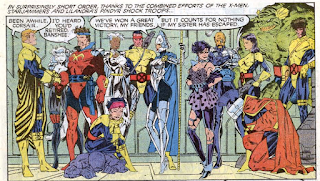 Both Shana the She-Devil (Ka-Zar's wife) and Nereel (leader of the United Tribes and mother of Colossus' unknown son) are shown to be thralls of Worm this issue. 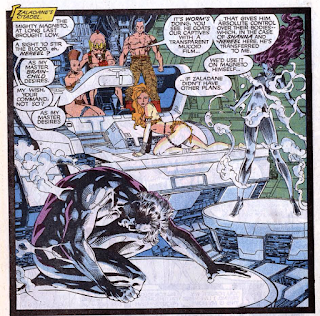 Magneto's trial by the World Court in issue #200 is referenced, as an alternative to killing Zaladane, but Magneto dismisses it out of hand. 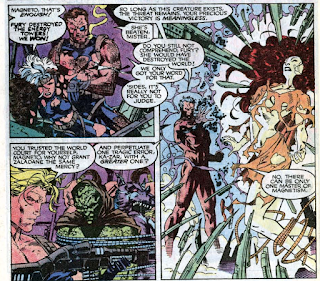 Psylocke finds herself uneasy whenever she gets too close to Xavier, shortly before being attacked by an unknown assailant. 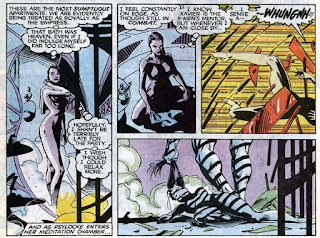 It's established that Psylocke has telepathically taught the X-Men the Shi'ar language.

Claremontisms
Banshee is back to using "Colleen" the Irish slang term for a young girl.

Artistic Achievements
The opening splash features the Starjammers, giving us our first look at Lee's take on the characters. Hebzibah's ass is, of course, front and center. 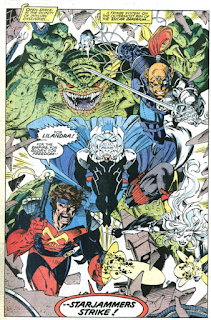 The Best There is at What He Does
Continuing the "Wolverine has lost a step" subplot, Deathbird thinks that Wolverine is but a shadow of his former self. 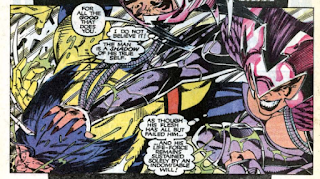 Young Love
Forge is seen flirting with an attractive alien in the wake of the X-Men's victory, which is odd, since Storm is right there (which just serves as a reminder that we've yet to see a proper Storm/Forge reunion, especially odd since finding/saving Storm was what motivated Forge to go out searching for the X-Men in the first place). 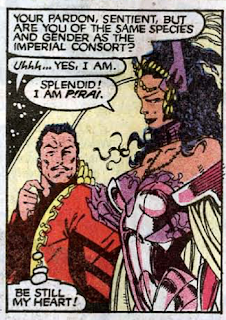 Teebore's Take
Bookended by the X-Men's continuing space adventure (featuring the not-unnotable first interaction between the X-Men and Professor X since issue #200), the real meat of this issue is, once again, the Magneto/Rogue/Savage Land material. The culmination of Claremont's work on Magneto (though he'll give the character a denouement of sorts in X-Men (vol. 2) #1-3), Magneto's decision to step off Xavier's path and mete out his own (lethal) brand of justice to Zaladane is so much more than the simple reversion to villainy championed (and, in some places, carried out) by John Byrne. Instead, it is a tacit acknowledgement of failure - that Magneto, who willingly took up Xavier's mantle in issue #200, has come to terms with the fact that, having tried it himself, Xavier's way will not help his people.

It's a failure for the character, but not for the writer - Magneto isn't reverting to villainy as the result of editorial fiat, he's moving forward, albeit on a different path than the one he started on seventy-five issues prior. It's all symbolically represented rather brilliantly, as Jason Powell points out, in Magneto's destruction of Zaladane. Positioned in this story as everything Magneto once was - a raving, one-dimensional villain flush with power, willing to destroy the world if necessary - Zaladane's death at Magneto's hands is a clear indication that while Magneto has accepted he is no hero, so too is his old way of 60s-style super-villainy no longer a valid option.

Compared to this relatively heavy stuff, the culmination of a character arc dating back to the late 70s, the Shi'ar material featuring the X-Men which begins and ends the issue reads much fluffier, but is compelling in its own right. The X-Men's easy defeat of the Imperial Guard, even with the handwave explanation, is a bit much, but the idea of the X-Men unknowingly fighting on the wrong side of the battle is fun, and Claremont doesn't allow either the big action of the plot or his impending departure stop him from furthering the characterization, giving relative newcomers Gambit and Jubilee something of a spotlight. The Shi'ar material also speaks to the anniversary nature of the issue (touted on the cover, as marketing starts making a big deal out issues divisible by 25): Professor X is back in the book for the first time since issue #200, another issue concerned with the condition of Magneto's character and referenced obliquely by Magneto elsewhere in the issue, and it features a whole, unified group of X-Men in action for the first time since, essentially, issue #250 (the last "anniversary" issue).

All in all, the Shi'ar stuff is the kind of storytelling Lee (and, presumably, Harras) want in the book at this time: classic adventuring, featuring familiar characters and settings from the series' heyday. In that way, this issue is, again, a perfect encapsulation of the push-and-pull happening between its two chief creators: the neo-classical Shi'ar material from Lee and the more heady, progressive character work of Claremont's Magneto, all wrapped up in a 90s-riffic triple gatefold cover.