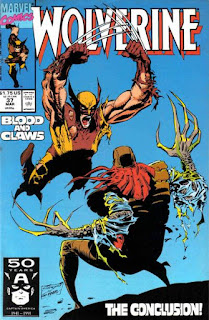 In a Nutshell
Wolverine, Lady Deathstrike and Puck return to the present.

Plot
Defeating the Nationalist forces sent against him, Wolverine cries out to Lady Deathstrike, telling her to show herself so they can finish this. Having climbed up the sheer face of an overhead cliff, Lady Deathstrike leaps down, attacking Wolverine as a time vortex pops up nearby. When Wolverine tosses Deathstrike towards the watching Nazi tank, she attacks it in a rage, destroying the vehicle and killing Hauptmann Schlachter, causing the time vortex to grow bigger. On the south side of the pass, the injured Puck suddenly wakes up and rushes back towards Wolverine, not wanting to be left behind in the past. In the present, Pierce is completing work on his latest project when the time vortex appears and spits out a piece of paper with the name and location of Wolverine and Deathstrike's fight. Using that information, Pierce realizes that everyone the time travelers have killed were destined to die in the pass or during the war, except for Schlachter. 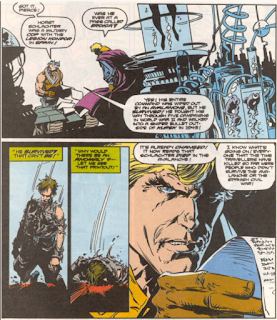 Just then, the vortex scoops up Wolverine, Deathstrike and Puck, sending them back to the future, but stopping periodically along the way. First, they witness Deathstrike's father's plane crashing during World War II, then end up in Spiral's Body Shoppe as she's transforming Yuriko into Lady Deathstrike, then New York during Wolverine's first fight with the cybernetically-enhanced Deathstrike, before everyone is deposited in the present. Puck, back in his dwarfish form, has no memory of the time travel, but sees that his snapshot from the Spanish Civil War now includes Wolverine. In Australia, Lady Deathstrike returns to find that Pierce has created an android replica of Wolverine which he intends to use as bait, with the killing stroke delivered by another robot resembling a small girl he's named Elsie-Dee.

Firsts and Other Notables
Though she doesn't yet do much, this issue marks the first appearance of Elsie-Dee, a small child-like android built by Pierce as part of a plan to destroy Wolverine (her name is pun on the acronym"LCD"). Notably, Pierce asks Bonebreaker if he stopped the logic circuit installation on the robot at the five-year-old level, as he instructed, but doesn't get an answer - this will become important to Elsie-Dee's development in the next story. 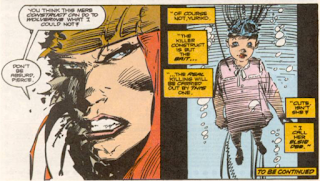 Also making his first appearance (though as yet unnamed) as part of Pierce's "kill Wolverine plot" is Albert, a cybernetic duplicate of Wolverine. 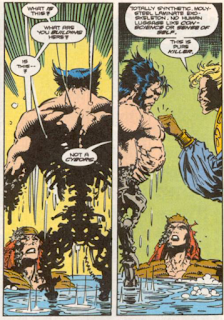 The pair will feature in the next story, break free of their original "kill Wolverine" programming, and become semi-recurring supporting cast members in the book during Larry Hama's run, with Albert even getting his own action figure eventually (it helps that being a robot duplicate of Wolverine makes for a good excuse to release yet another Wolverine action figure).

A Work in Progress
Pierce determines that the changes to the timeline wrought by Wolverine and Lady Deathstrike's trip to the past were limited because most of the people who died as a result of their actions were already slated to die in the avalanche, and/or didn't make it out of Guernica at that time for other reasons anyway.
During their trip back through time, Wolverine and Lady Deathstrike end up in the midst of Deathstrike's transformation at the hands of Spiral.

Then, they get tossed out at the site of their first encounter, post-Deathstrike's cybernetic enhancements, during the events of X-Men #205 (which the footnote erroneously references as issue #204). Present Wolverine even interacts with Katie Power, who doesn't realize she's talking to a chronologically-different Wolverine because her eyes are still closed per Wolverine's command in X-Men #205. 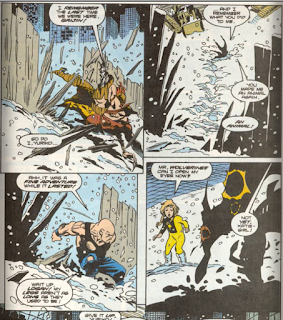 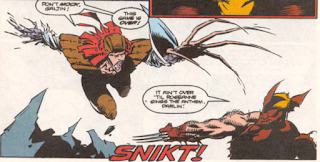 The biggest change to the timeline caused by Wolverine and Deathstrike, according to Pierce, is the elimination of the fifth Teenage Mutant Ninja Turtle (though I'm not entirely sure how he would know one existed if the timeline was changed around him).

Teebore's Take
"Blood and Claws"/Wolverine's Adventure in the Spanish Civil War comes to a close with the best chapter in the story, one which fully embraces the time travel aspects of the plot to send Wolverine, Lady Deathstrike and Puck careening through time, weaving them in and out of significant moments from the history of the first two. While that is a more standard trope of time travel stories, this issue expands on the "time twister" concept from the previous one to actually show Pierce reacting to the changes wrought by Lady Deathstrike and Wolverine in the past, something we don't see too often in time travel stories (usually, it's just the "before" and "after" timelines, not the "in flux" timeline). The whole "fifth Ninja Turtle" bit at the end is perhaps a bit too cute, but kudos to Hama for writing in explanation for why more of the timeline wasn't changed (I'm not sure the "they only killed people who died in the avalanche anyway" idea really holds together under scrutiny - the Butterfly Effect, especialy, would suggest it doesn't - but the effort is nonetheless appreciated).

Following on from his use of details from the previous Yakuza story to help setup this story in issue #35, Hama is also writing to the series more here, weaving in setups to the next arc by teasing Albert and Elsie-Dee in this issue amongst all the time travel shenanigans. It's a technique that is always appreciated as helps the series read less like a loose collection of finite stories strung together (which it has for most of its post-Claremont existence), and more like a larger, Claremontian narrative where individual stories don't so much end as overlap and bleed into the other.