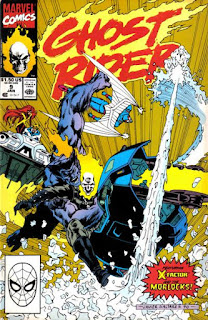 In a Nutshell
X-Factor and Ghost Rider rescue children kidnapped by Morlocks.

Plot
Ghost Rider stops Blackout from killing an innocent bystander, but is then attacked by agents of HEART before being rescued by a Morlock, who promises to take him to some missing children. Meanwhile, X-Factor hears a news report about a rash of recent kidnappings in the city, and decides to investigate. Below the city, the Morlocks insist they've taken the children for their own good, but with dawn approaching, Ghost Rider must leave before investigating further. The next night, X-Factor arrives in Cypress Hills, the scene of the last reported kidnapping, while Ghost Rider is in the area, pursued once again by HEART. Abandoning his bike, he journeys once more into the Morlock tunnels and meets Pixie, a Morlock who has been deformed by Masque and led the charge to kidnap the children in order to save them from Masque, who intended to do the same to them. 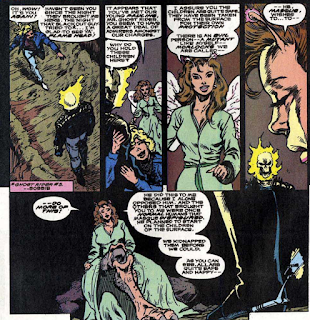 Just then HEART attacks Ghost Rider, drawing the attention of both X-Factor and Blackout. Overwhelmed, HEART retreats as X-Factor protects the kids and Blackout kills Pixie. Enraged, Ghost Rider calls forth his bike and uses it to save the remaining kids, then battles Blackout, triggering an avalanche that collapses the tunnel, burying them both. In the wake of Pixie's death, the remaining Morlocks promise to return the children to their homes but continue to protect them from Masque. Just then, Ghost Rider emerges from the tunnel and reclaims his motorcycle, then rides off. Iceman asks Cyclops if they should pursue him, but Cyclops says that despite his appearance, Ghost Rider's action that night are what count.

Firsts and Other Notables
Having not read much Ghost Rider of this vintage, there's a bunch of stuff in this issue pertaining to his series that completely went over my head (it's not terribly new reader friendly). Thanks to the internet, I now know that Blackout, the villain stalking/fighting Ghost Rider in this issue, is an agent of Deathwatch (him, I know) with the ability to cloak himself in darkness who eventually becomes some kind of quasi-vampire. Also, Ghost Rider is being hunted in this issue by the organization HEART (Humans Engaging All Racial Terrorism), a paramilitary group led by Tyler Meagham hired by the citizens of Cypress Hill (presumably the town from which Ghost Rider hails) to take down Ghost Rider. They first appeared in the previous issue, and Tyler will eventually become the villain Heart Attack.

This issue marks the first and last appearance of a Morlock named Pixie, who has kidnapped kids all over the city to save them from Masque, who intended to use his power to deform them as part of his assault on the surface world.

Creator Central
Howard Mackie, who launched this iteration of Ghost Rider's series, writes this issue. In addition to being the chief Spider-Man writer after the John Byrne reboot, he will eventually have an extended run on X-Factor post-"Age of Apocalypse", eventually closing it out and transitioning the series into Mutant X, along with other ancillary projects in the X-office (like the first Gambit limited series). Aside from the verbose Beast, most of X-Factor speaks with fairly generic voices, a frequent problem of Mackie's.

The Chronology Corner
This issue takes place between the end of "X-Tinction Agenda" in X-Factor #62 and X-Factor #63, prior to the team's adoption of the Portacio-designed costumes.

That said, much of this issue reads like it should follow shortly after "Inferno", with Mackie twice referencing events of that story, both in terms of children being kidnapped and Jean's encounter with Madelyne and N'astirh in X-Men #242. 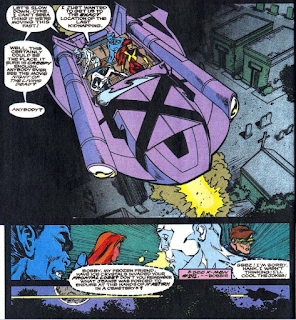 Similarly, though he appears on the cover, Archangel does not appear in the issue, making me wonder if Mackie was using issues of X-Factor prior to "X-Tinction Agenda" (when Archangel was off on his own, drugged or in Crimson's thrall) as a point of reference.

Teebore's Take
Though they receive cover billing, I'm not entirely sure what X-Factor is doing in this comic. Their appearance is a token one, at best, popping up just a few times throughout the issue and never interacting directly with Ghost Rider. Yes, the Morlocks are the ostensible antagonists of the story (the references to Masque - who does not appear - are another indicator of the characters' relatively higher profile during this time, where he's also being setup as a recurring antagonist for the New Mutants/X-Force), so the inclusion of some X-characters isn't entirely out of left field, and X-Factor does have some history with that group, but the New Mutants of this time would have made more sense, followed by many of the X-Men, then, finally, X-Factor (maybe X-Factor was the only group the X-office would let Mackie use?). I'm also not sure that X-Factor, while still a top-selling title the least of three main X-books, sales-wise, would have given Ghost Rider much of a signal boost. Then again, given Ghost Rider's popularity at the time, maybe X-Factor's appearance here was meant to be a signal boost for them; if so, it undoubtedly failed, because again, X-Factor doesn't really do anything or factor (pun intended) into this story much at all.

Next Issue
Tomorrow, Excalibur does some superheroing in Excalibur #35, and Friday, "Blood and Claws" wraps up in Wolverine #37. Next week, the double-sized Uncanny X-Men #275.