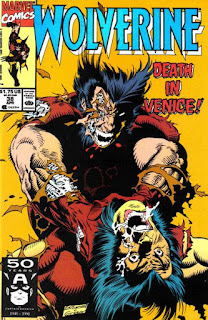 In a Nutshell
Wolverine runs afoul of Albert and Elsie-Dee.

Plot
Storm arrives in California looking for Wolverine, and runs afoul of a pair of low level crooks named Sally & Jocko, who have placing wanted posters for Wolverine throughout the city, claiming he's been robbing them. Despite video evidence, Storm refuses to believe them, and continues to search. Across town, Reno & Molokai call Sally from the bus station, saying they've found Wolverine, who steps off a bus, saying goodbye to a pair of attractive women. They grab Wolverine, while at one of Sally's casinos, another Wolverine and a small girl rob the place. Overhearing a conversation between Reno & Sally, Wolverine learns of his duplicate, then breaks out of Molokai's trunk, stealing the car and heading off in the direction of the duplicate. Meanwhile, the Wolverine duplicate and the small girl, named Elsie-Dee, arrive at an abandoned warehouse. In Australia, Pierce explains to Lady Deathstrike that Elsie-Dee is a robotic trap for Wolverine, intended to lure him close before exploding, but unknownst to him, Bonebreaker erroenously installed an advanced program into her. 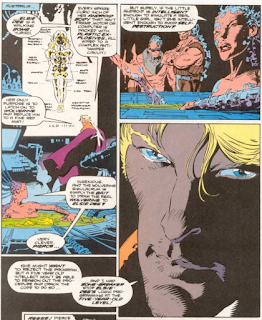 Back in Venice, Elsie-Dee upgrades the Wolverine robot's intelligence, naming him Albert, then sends him out to attract Wolverine's attention. Meanwhile, Wolverine comes across the women from the bus, and together, they head for the boardwalk, where a fight breaks out between Wolverine and Albert. The fight attracts the attention of Storm as well as Sally, Jocko, Reno & Molokai. Storm uses her power to summon a tidal wave that sweeps the thugs out into the ocean, as Wolverine damages Albert enough to force his retreat. Elsie-Dee radios Albert, telling him to repair himself, but that she can no longer ignore her primary directive. Starting the warehouse on fire, she goes to a window and calls out for help, attracting Wolverine's notice.

Firsts and Other Notables
Elsie-Dee and Albert make their first full appearances in this issue, after brief cameos in the previous issue. It's established that Elsie-Dee speaks with a lisp, part of her "cute child" cover, while Albert is named this issue by Elsie-Dee, after saying that following her modifications to his programming, he'll be as smart as Einstein. 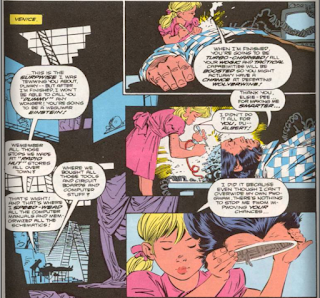 Reno and Molokai, two thugs working for a crime boss in Venice, California, appear for the first time this issue. They will later be revealed as the killers of Jubilee's parents in a later story (though I believe the circumstances of her parents death have been retconned a few times since then, so it's possible that's no longer the case). 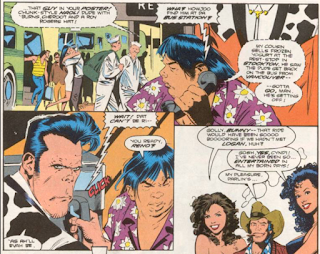 Storm appears in this issue, appearing for the first time since her brief turn in issue #19, and the first member of the X-Men to play a significant role in the course of an issue. 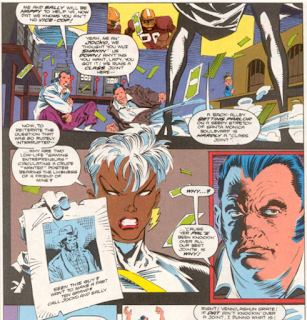 The Chronology Corner
Storm appears here (and in the next two issues) after X-Factor #70 and before X-Men (vol. 2) #1, setting this story in the gap between the end of the "Muir Island Saga" and linewide relaunch.

A Work in Progress
Bonebreaker confirms this issue that he failed to stop Elsie-Dee's programming at the five-year-old level, but Reese advises him to keep that to himself rather than tell Pierce.

The Grim 'n' Gritty 90s
Bystanders of a fight believe that Lethal Weapon 3 is being filmed. 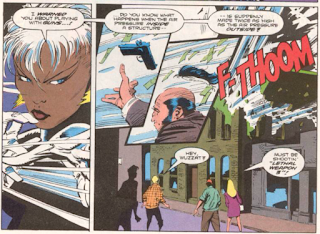 The Best There is at What He Does
Somehow, Reno & Molokai are able to knock Wolverine out with a blow to the head.

Teebore's Take
I have a feeling that Albert and Elsie-Dee are mostly maligned amongst Wolverine fandom, as they are inherently ridiculous characters (and Elsie-Dee's phonetically-written lisp is annoying, the worst Claremontian accented dialogue dialed up to eleven), but I nevertheless have always found something charming about them. Amidst all the usual grim and gore and angsty-teeth gnashing over honor and the struggle to control the beast within, etc., sometimes it's nice to have something a little more lighthearted and ridiculous thrown in - it makes for a welcome reprieve from the usual noir settings, and makes those regular settings resonate even more via contrast. And, compared to the bloodbath of the Yakuza and Spanish Civil War stories, this issue is a downright farce as a group of mildly-incompetent West Coast gangsters keep getting Albert and Wolverine confused as Wolverine makes time with a pair of bikini babes, Elsie-Dee races to outwit her programming, and Storm flits in and out of the whole thing, coming across even more like the X-Men's den mother than ever before.

But for all the farce, there's also something inherently said about Elsie-Dee. Making her a doomed robot in the form of a five-year-old girl is easy shooting, of course, but beyond that, there's the pathos of her being ridiculously smart but still unable to fix herself, and her struggle to overcome her embedded programming parallels (intentionally or not) the similar struggle we've seen Wolverine go through for most of his existence, a struggle that will shortly become much more of a focus of the series as Hama delves deeper into Wolverine's backstory. Ultimately, all the various elements of this issue, the juxtaposition of Pierce's mad vendetta against Wolverine and the sunny, farcical settings elevate the story. It's not something that would work all the time, but for now, it serves as a welcome break from the usual tone of the series.