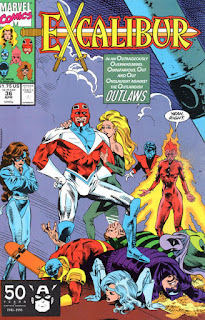 Plot
Called to the Darkmoor Research Center, where Captain Britain once studied, Excalibur meets with Captain Britain's old mentor, Professor Walshe. But before he can tell them why he called them, the facility is attacked by Silver Sable and her Outlaw mercenary group, who claim the professor has stolen Symkerian technology. As Walshe denies the accusation, a fight breaks out between the two teams, until Shadowcat and Prowler discover the stolen tech in the facility. Walshe then admits he has been using the tech to experiment with clones, desperate to find a way to save humanity from the potential fallout of nuclear war, before revealing himself as a former vessel of the geneticist Arnim Zola. 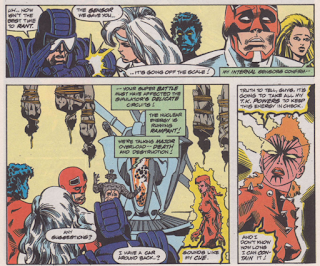 Unfortunately, both the irradiated clones and the monstrous being Walshe created to guard them awaken and break loose. Working together, both teams attempt to stop the creatures from escaping the facility, but Walshe insists only his death will stop them. He begs Captain Britain to kill him, but Brian is unable to harm his former mentor, so Meggan intervenes, killing Walshe to spare Brian from having to do it.

Firsts and Other Notables
In this issue, Excalibur fights, then teams up with (in true Marvel fashion) a loose assortment of (mostly Spider-Man) villains-turned-heroes/goodhearted mercenaries comprised of Silver Sable, Sandman, Paladin, Rocket Racer and Prowler, referred to collectively as the Outlaws. I know that Silver Sable and Sandman eventually become part of Silver Sable's bounty hunter/mercenary team the Wild Pack (which, in true 90s fashion, gets its own series for awhile), but I have no idea if this particular assortment of characters ever popped up as a group outside this issue. 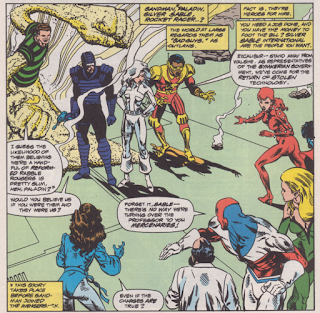 This takes place during the brief time when old school Spider-Man villain Sandman reformed and worked as a hero for awhile, eventually joining the Avengers as a reservist (after the events of this issue, per a footnote) before leaving the team to join the more financially-viable Wild Pack. I believe Howard Mackie, in the post-Chapter One era of Amazing Spider-Man, made Sandman a villain again (which is a shame, as I always kinda liked the idea of Sandman as a blue-collar hero), not that much had been done with the idea of him as a hero after the Wild Pack comic folded.

Excalibur battles Arnim Zola (sort of, technically, it's an old, semi-autonomous duplicate of Zola), the Nazi/Hydra scientist with a camera for a head and his face on his belly, who is revealed to have been impersonating Captain Britain's scientific mentor, Professor Walshe, all along. I have no idea if Walshe appeared previously in earlier Captain Britain stories, but assuming he did, it seems odd to have a fill-in writer pull a "he's been Zola all along!" retcon on a character that, theoretically, goes back decades and seems to have a close relationship with Captain Britain (he recognizes Brian under the mask, saying he'd sooner not recognize his own son). 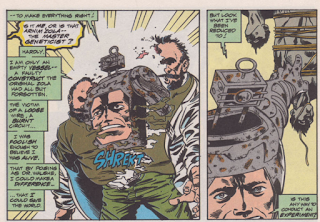 A pinup in the back of the book teases the return of Technet, not seen since the early days of the "Cross-Time Caper" but still technically stuck on Earth, I assume, pending their capture of Phoenix.

The Statement of Ownership in this issue lists the total number of copies sold in the preceding twelve months as 265,141, with the single issue nearest to the filing date selling 197,150.

A Work in Progress
Excalibur is called in to the Darkmoor research facility during the midst of a protest about nuclear energy, with Phoenix wondering whether "civil disobedience" is something they should really be handling. 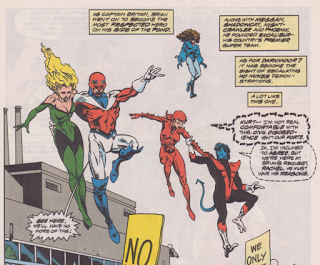 She also asks whether there's a right to peaceful assembly in Britain, highlighting that she's an American in the UK (something the series doesn't mention too often). And I'll admit I honestly have no idea if they do (though I assume they have some form of freedom to assemble). Any British readers out there?

Silver Sable says that if you come to England, expect to meet Excalibur, which hasn't quite been the experience of the series thus far but is still a nice piece of "Excalibur as the UK Avengers" setup. 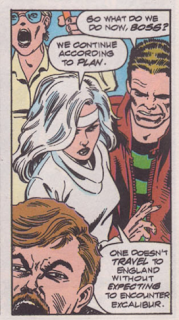 Someone (the art doesn't make it clear) wonders if Excalibur can go anywhere without a wall exploding. 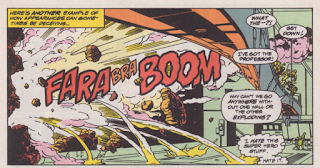 Teebore's Take
As with the previous issue, this is hardly required reading but is, nevertheless, a surprising solid little done-in-one story. Once again, we have Excalibur acting as a kind of "British Avengers" (with other characters commenting as such), called in to a situation just because they're superheroes (mostly), along with a connection to the history of the series (through Captain Britain), and we even get some non-Excalibur, non-mutant guest stars and villains, which always helps a series feel bigger than itself. Once again, Lobdell doesn't seem to be writing like he's just filling in on the series: this is the kind of story that usually comes in the middle of a lengthy creative run, often between two larger storylines, a breather issue that does something generic with the characters and usually features guest stars or villains from outside the normal realm of the series. For most series, that kind of thing is, at best, an average diversion from bigger and better things, a story that you simply hope isn't a complete waste of time. For this series, by simply being "bog standard superhero fare", this issue is another surprisingly bright spot amidst the series' seemingly never-ending slog of poor-to-mediocre fill-ins.

Next Issue
Tomorrow, Wolverine meets Elsie-Dee in Wolverine #38, and next week, he meets his adamantium skeleton in "Weapon X".