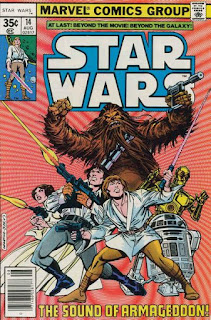 In a Nutshell
The Star Warriors are reunited as they help the Dragon Lords defeat Governor Quarg.

Plot
On Drexel, an imprisoned Luke dodges the attacks of a wild Chewbacca, while Quarg and his men struggle to bring down Crimson Jack's ship. Aboard that ship, Jack angrily laments Han's now-apparent double cross that brought them to Drexel. On the planet, Quarg's men tow the Millennium Falcon, with Leia still aboard, to their base, while Quarg decides to call on Luke and the droids for help bringing down Jack's ship. Later, Quarg explains to Luke that he wants to use the Falcon's engines to boost his jamming power, and offers up the captive Leia to force Luke into helping him. Meanwhile, Han, having been recused by one of the Dragon Lords, is shown around the underwater cavern that serves as their base, learning that they are working in concert with the the sea serpents, whose ferocious attacks are being fueled by the jammer. But soon, the jammer will kill them all, so the Dragon Lords are launching an all-out assault to destroy it. After learning that the Falcon is also one of their targets, Han joins them. 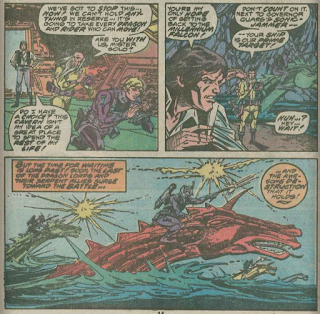 Later, Luke and the droids finish their work on the Falcon just as the Dragon Lords break through Quarg's defenses, and Luke finds himself face to face with Han, who beat the other Dragon Lords to the ship in order to save it. But Luke insists he has to activate the changes Quarg wanted him to make, just as Chewbacca escapes from his cell, allowing Leia to flee during the ensuing distraction. Quarg chases her to the top of the ship as the super-charged jammer starts to effect the sea serpents, but Luke explains to Han that his modifications also free the Falcon, specifically it's gun systems, from the jammer's effect, enabling them to blast it and save everyone. But just then they spot Leia, still being pursued by Quarg, at the top of the jammer. As Quarg prepares to execute her, Luke swings out and saves her, just as Han fires  on the jammer, destroying it. Later, the Dragon Lords thank the Rebels for their help, and Luke is happy to be reunited with everyone, but Han is simply staring into the sky, thinking of Jack's ship that may still be out there.

Firsts and Other Notables
With everyone finally arriving on Drexel by the end of last issue, this one finds the entirety of the main characters united and working together again for the first time since Han and Chewie headed off on their own at the very beginning of issue #7.

After learning more about Quarg's pirates and how they came about last issue, this issue reveals more about the Dragon Lords, specifically that the faction of technicians which split off from Quarg are working with the sea serpents (as opposed to simply enslaving and riding them) and that the smaller lizards that hang out on Quarg's massive ship base are in fact spies for the Dragon Lords. 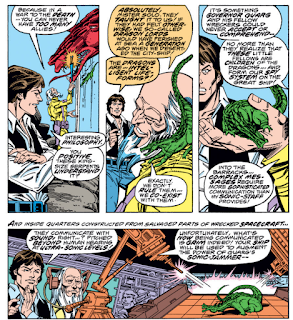 Just Yesterday, In a Galaxy Surprisingly Close By
The "yardarm" of a sailing ship is apparently a common enough term in the Star Wars universe that both Han and Luke know what one is. 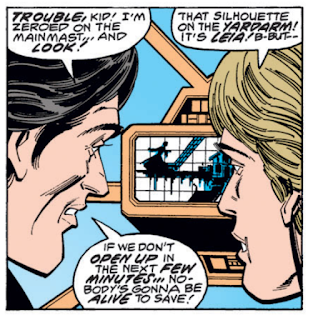 Young Love
In a brief sequence aboard Crimson Jack's ship, we see some more of Jolli's questionable attitude towards men, as she struggles with the notion that she might be *gasp* attracted to one. 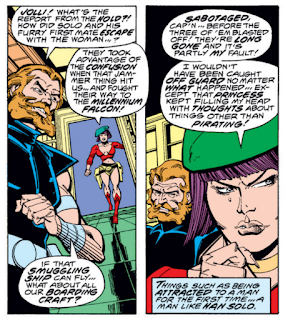 For Sale
There's an ad in this issue for Star Wars action figures, which suggests a level of poseability the figures simply do not have. 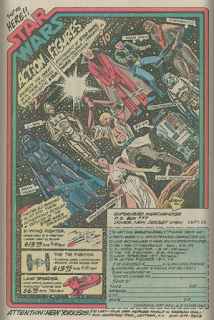 Also, there's a house ad for the Claremont/Byrne/Austin X-Men, which, humorously, re-purposes the splash page to X-Men #107, which was drawn by Dave Cockrum. 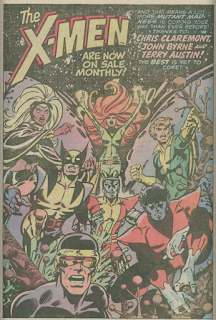 Teebore's Take
Though Crimson Jack, in orbit around Drexel, remains to be dealt with, this issue is functionally the conclusion to the "Doomworld" storyline, and as such, it ends the story with a bang with its strongest issue yet. Part of that simply comes from the fact that, for the first time since the end of the movie adaptation, this issue finds the main characters united once again, working towards a common goal. After seven issues in which the characters have been broken up and scattered to various places, that's refreshing. Part of the success of this issue is also the fact that's it's essentially an all-out action issue ("in the Mighty Marvel manner!") but also doesn't abandon characterization in the face of all the spectacle, giving everyone something to do (including Leia, who comes dangerously close to damsel in distress territory here, but still manages to hold her own).

But most importantly, this issue is the most successful yet at capturing that ephemeral feel of Star Wars, both in terms of the quasi-retro, serial-esque swashbuckling action (Luke swinging out to save Leia is perhaps a too obvious nod to the film, but it works nonetheless) and in reflecting the basic ethos of the film, that life and harmony will win out over death and discord. In the Dragon Lords, who are revealed to be working in unison with the massive serpents they ride, Goodwin & Infantino put forth a symbiotic relationship in which outsiders are living in peace with local inhabitants, a relationship which proves superior to the artificial, tech-driven, dictatorial society led by Governor Quarg. It's the kind of relationship that the Star Wars universe will return to, again and again, including with the Ewoks in Return of the Jedi and all throughout The Phantom Menace, as it speaks to the core themes at the heart of the series.

The end result is an issue that is both the most Star Wars-iest yet, for the way it reunites the main characters, taps into the larger themes of the saga, & fills its pages with swashbuckling action, and is also one of the series' strongest issues yet, helping to close out at least the Drexel portion of the "Doomworld" storyline on an enjoyable high note.

Next Issue
But Crimson Jack is still out there!