Game of Thrones 5x01: The Wars to Come 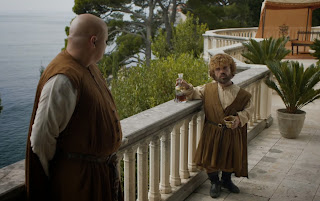 Welcome back readers! Or I suppose if you're here for the first time,,,welcome! I hope you enjoy my reviews of Game of Thrones. I don't have anything awe-inspiring to say so let's just get to it.

King's Landing
We start off Season 5 with a couple of young girls we've never seen before. The bitchy attitude of one of the girls clues us in that she is Cersei. It's a very rare Game of Thrones flashback!

Young Cersei enters a witch's hut and demands that her fortune be told. The witch complies and tells her she will marry the king (not the current Targaryen prince) and the king will have 20 children and she will have 3. Before young Cersei has a chance to make heads or tails of that statement the witch also says that Cersei's children will wear golden shrouds. To which I say if all it takes to be a fortune teller is to say that people will die at some point in time then call me freakin' Nostradamus!

Back to the present Cersei is attending the funeral (or visitation?) of her father, Tywin Lannister (with those creepy, creepy rock eyes). She berates Jaime for letting Tyrion loose which allowed for Tyrion to kill Tywin. Which is true, but maybe if her father wasn't an asshole who had more enemies than gold then these things wouldn't happen.

Anyway, the gist of Cersei's speech is that they were the hunters and are now the hunted. They've been weakened. It's time for the Lannisters to circle the wagons.

Pentos
Tyrion has been traveling by box like his code name was Solid Snake. Luckily, Varys was there to keep him fed, drunk and help him with waste disposal. Tyrion finally gets out and is surprisingly mobile considering how long he's been stuck in a cramp box. He immediately goes for some wine which he can't keep down.

Long story short, Tyrion is mopey and self-loathing and it's annoying. Varys wants Tyrion to pull himself together (but does not offer him more beer). Varys says Westeros will need intelligent people like Tyrion as well as a wise, strong, fair ruler. Tyrion says a man like that doesn't exist. Varys tells him to check his gender biases at the door. With that, they're off to Meereen.

Meereen
Speaking of Meereen, that giant statue atop the central pyramid is being pulled down. I'm sure this will upset the graphic designers who will need to create a new opening map sequence for Meereen as well as it will upset future Westeros history majors who will mourn the wanton destruction of ancient architecture.

An unsullied who is not Grey Worm decides to seek some cuddles in a brothel. He gets his throat slit for his efforts. Apparently there's a resistance group against Daenerys called the Sons of the Harpy. Daenerys wants to bury the fallen unsullied at the Temple of the Graces. This will enrage the Sons of the Harpy but that's what Daenerys wants because then they'll show themselves and make themselves an easier target. I'm not sure if her confidants agree with this strategy but I see the logic.

After that, Hizdahr zo Loraq (totally didn't have to look up that name) has come to say that the Wise Masters of Yunkai have agreed to a shared government with the freed slaves provided the fighting pits can be reopened. This time the fighters wouldn't be slaves but volunteers. Daenerys will have none of it, though, Even when her boy toy Daario tries to convince her she's unreceptive. C'mon Daenerys, pacify your people with blood sport. It worked for Rome…right?

Anyway, Daario oddly segues from the fighting pits to Daenerys using a show a force via dragons to keep the peace. I'm unclear how the two topics were related but here we are. Daenerys decides to visits her locked away babies and realizes she has zero control over them. Teenagers, am I right?

The Eyrie
Lord Petyr Baelish is still creepy. He drops Robin off with Lord Yohn Royce in hopes of him teaching Robin how to fight. It looks to be an uphill climb. However, Robin is supposed to be a ruler. Who cares if he sucks at combat? Have we ever seen Daenerys fight in combat? Joffrey couldn't fight and I doubt Tommen could either. Do we have any proof that Stannis Baratheon is good with a blade? Teach the kid to lead not to make others bleed.

Anyway, Baelish is whisking Sansa Stark away to some mysterious place that will undoubtedly turn out to be super creepy.

On the Road
Brienne is sad that Aria didn't want her protection and that she can't find a good leader to follow. (As Tyrion noted earlier, they're hard to find.) Podrick and his third leg want to follow Brienne. Brienne would rather mope.

The Wall
Stannis Baratheon wants Jon to convince Mance Rayder to swear allegiance to Stannis and then send his wildling army to take back Winterfell. (Remember that place?) In exchange, the wildlings would gain land South of the Wall. Stannis gives Jon until nightfall to convince Mance to kneel. I'm not sure Jon Snow can make it down the elevator in that amount of time.

Jon Snow does try to convince Mance of the logic of kneeling. However, Mance tells Jon Snow he'd rather die than kneel before someone else. Mance dies.

Other Thoughts
So this season premiere wasn't very action packed. It was more about putting pieces in place for what will come in the rest of season. It was a fairly quiet episode and lacked the "big moment" that this series has become known for. I'm not saying it was a bad episode it just wasn't terribly exciting.

The fortune teller witch also told Cersei that she would be cast down by a younger, more beautiful queen. I think we are supposed to assume it's Margaery Tyrell but, frankly, a lot of females in Westeros could fit that bill.

That scene with the fortune teller speaks a lot about why Cersei is the way she is. She's paranoid about her children and distrusts other women.

I suppose Cersei finally has a good reason to hate Tyrion.

I wonder how dead bodies are preserved for display in Westeros.

So Lancel Lannister is now a religious zealot. OK. And he talks of him poisoning Robert Baratheon under Cersei's orders. Is this the first time we've had confirmation that Cersei was behind Robert's death?

So Ser Alliser Thorne is still alive. Was that in doubt last season? I forget...

Melisandre gave Jon Snow an interestingly long look. Perhaps he has some king's blood in him?

But I'm unsure why Jon not being a virgin is a good thing.

I like the idea of Brienne wanting to be led (by a good leader) instead of leading herself.

Varys thinks Stannis is too strict, but Daenerys doesn't seem to be into compromising either.

I am excited to see Tyrion meet Daenerys.

I wonder if there will be any repercussions to Jon Snow ending Mance's life prematurely. Or will Stannis think dead is good enough?

So is there a second-in-command of the wildlings who will be the new leader? What if s/he kneels to Stannis?

Daenerys: Angry snakes lash out. It makes chopping off their heads that much easier.

Season 5 Totals
Boob Count: 3 (Yup, there is a girl with only one breast exposed.)
Full Frontal Count: 1 (1 Female)
Butt Count: 3 (3 Male)
Coitus Count: 0 (But there was some serious cuddles!)
Main Character Death Count: 1 (Mance Rayder, I would say you will be missed but...it's tough for me to care one way or another.)
Hodor Count: 0 (No Hodor this episode. :-(  )
Newer Post Older Post Home
Posted by Dr. Bitz at 3:12 AM