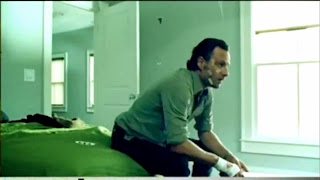 The season 5 finale of The Walking Dead, Conquer, was all about choices. Individual characters and the entire town of Alexandria were put to the test. The end result was, frankly, a lot better than I had predicted.

Glenn has a showdown with Nicholas who unabashedly tries to kill Glenn. He shoots Glenn to start and then, after a brawl, leaves Glenn for dead with the zombies. Glenn survives (because of…reasons?) and takes down Nicholas. Now Glenn has to choose whether or not to kill him. Glenn has the justifiable right to end Nicholas' life there. I wouldn't blame him if he did. However, Glenn makes the surprising choice to take Nicholas back to Alexandria. What happens once they're inside the walls is yet to be determined.

Sasha had to make her own choice too. Either she continues down her path of, well, insanity, or she seeks out help. Unfortunately she seeks out help from Father Gabriel. Gabriel's own choice is between pointing out how bad other people are in order to make himself better or accept the guilt he feels about his own actions.

When Sasha seeks help from Gabriel and simply gets berated for being evil this leads to another choice for Sasha, whether or not to kill Father Gabriel. With the help of Maggie, Sasha chooses mercy and Gabriel chooses to accept his sins and, hopefully, move on from them to become a better person.

Dale and Aaron were out searching for recruits. They follow an ill-fated, red poncho-ed man who seems to know what they're doing. They lose his trail and now must choose to either find him again or go in search of food at a factory they came across. The choose…poorly…especially since the factory is booby trapped with zombies!

Luckily, Morgan has chosen to save life in all forms. So he rescues Dale and Aaron who are grateful enough to bring him back to Alexandria. Morgan almost chooses not to until he realizes Dale knows Rick.

Rick decides to play ball but gets delayed by zombie roaming through town thanks to Nicholas leaving the door open. He uses the now dead(er) zombie as proof that he knows what the city needs and how to keep it safe. He makes a grand speech and people seem to be won over.

Well, everyone except Pete. He's still a dick and uses Michonne's sword to kill Reg because this is the season finale and it's not like you can't have NOBODY die. So, Rick waits for Deanna to make her choice and suddenly the death penalty is a viable option.

Rick offs Pete as the anti-killing Morgan shows up just in time to see what Rick has become.

Other Thoughts:
Some people feel like this episode was anticlimactic. True, a town meeting isn't quite the action packed season finale we come to expect from The Walking Dead but this episode did significantly change the status quo. Despite being inside the walls Rick's group were outsiders. Now they're there to stay and I assume next season they'll be fully integrated into Alexandria. Or Alexandria will be fully integrated into Rick's group. I suppose it depends on how you look at it.

The title of this episode, Conquer, made me nervous, I figured it was referring to Rick and company conquering the city of Alexandria. I suppose they kind of did but in a way that is much more pleasing to the palette than I expected.

Deana's conversations with Maggie didn't feel very genuine. I think the issue is that we hadn't seen Deana and Maggie talk much before so it's odd to see them discuss issues and trust in each other's opinions.

I feel like the Rick exile plot would carry more weight if Rick's group had been in Alexandria longer.

Speaking completely objectively, I think Michonne knocking Rick out was a smart move not matter what. It developed trust with the Alexandrians which could have been used to gain acceptance or exploited if Rick and company wanted to take the town by force.

The Alexandrians seem very concerned about Rick's crazed outburst last episode. This is the zombie apocalypse. Has nobody freaked out in Alexandria before?

Daryl and Aaron killed zombies through a gate before opening it! How novel!

I'm still a little unclear why Nicholas was so dead set on being a supply runner and why he is so angry that Glenn won't let him be one anymore. Is it pride?

Is Gabriel the worst priest ever?

Was it me or did Rick nearly smirk when Reg bought it? Not that he didn't like Reg but maybe he felt like this would prove his point that only he can protect them?

Reg was responsible for the design of the walls, the power grid of Alexandria and who-knows-what-else. So, will Eugene have to take over this responsibility? Probably another example of Rick's group coming into power over Alexandria.

It's interesting that the last time Rick and Morgan came face-to-face it was Morgan who was crazy. It seems now the shoe is on the other foot.

The biggest downside of this episode was Rick's speech at the end. What I really wanted Rick to say is that both groups can learn from each other. They can take the best aspects from each group and become a better whole than they are parts. Instead, what we got was Rick saying is all the Alexandrians will have to adopt Rick's way of thinking or they wouldn't survive in the zombie apocalypse. The Alexandrians seemed to accept this but I'm not the biggest fan of that message.
Newer Post Older Post Home
Posted by Dr. Bitz at 11:16 AM