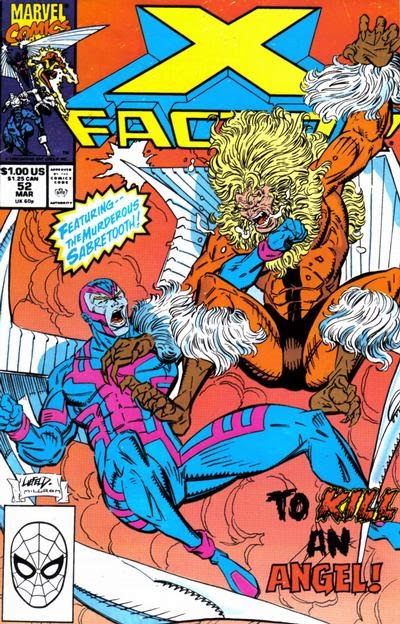 In a Nutshell
Archangel battles Sabretooth

Plot
Archangel watches from above as Officer Charlotte Jones discovers the body of the Morlock Wings, then saves her from a gang of crackheads before flying off, fighting the urge to kill the criminals. As he leaves, Sabretooth, watching from a nearby rooftop, shoots him down with an assault rifle. Meanwhile, Scott, Jean, Hank and Trish Tilby are on a double date when the restaurant is attacked by giant cockroaches. Meannwhile, Opal arrives at work and drops off dinner for Mole, who is still hiding in the basement of the music store. On a snowy rooftop, Sabretooth checks the fallen Archangel, but gets his face slashed by Archangel's wings.

At the restaurant, Scott, Jean and Hank battle the massive bugs, finding it all familiar, as Bobby, babysitting Christopher, arrives at the music store where Opal works. Smitten with Opal, who's angry at Ship for blocking the sunlight from her apartment, he asks her out. Elsewhere, Archangel and Sabretooth continue to fight, with Sabretooth gutting Archangel. At the restaurant, Jean heads to the roof, where she discovers the Locust coordinating the attack, and she & Hank quickly defeat him. At Power Records, Opal and Bobby leave on their date, followed by Mole, who fears for Opal's safety with Sabretooth on the loose. Elsewhere, Sabretooth taunts Archangel, telling him he laced his claws with a nerve poison, but Archangel manages to lash out with his wings, gutting Sabretooth as well, and the pair collapse into the bloody snow.

Firsts and Other Notables
Archangel and Sabretooth meet and battle one another for the first time, an event which I seem to recall was a fairly big deal at the time, involving as it does a confrontation between two characters with strong ties to one of the franchise's big, seminal storylines.

Remember the Locust, aka Dr. Hopper, the mad college professor the X-Men battled way back in X-Men #24? Well, Louise Simonson does, and she brings him back in this issue, as a one-off, mostly comical villain. He's the first of two Silver Age villains Simonson will bring back in the next stretch of issues. 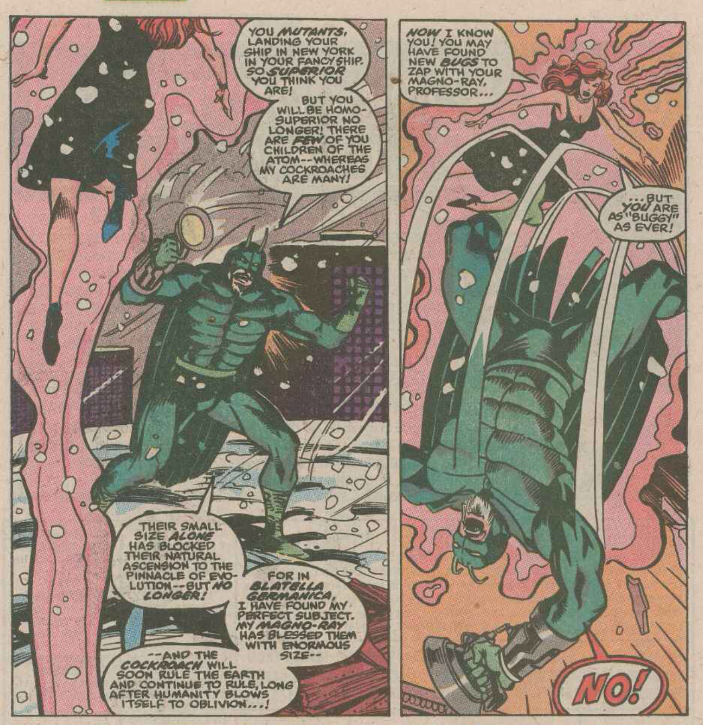 Rob Liefeld provides the cover art, making this another month where he does the covers to both X-Factor and New Mutants. Back in the day, this was the priciest X-Factor back issue between "Inferno" and "X-Tinction Agenda", presumably on the basis of the Liefeld cover on top of the Archangel/Sabretooth battle.

A Work in Progress
Surprised by all the look they get at the restaurant, their waiter explains it's because they're celebrities akin to movie stars, the graven images still worshiped by society. 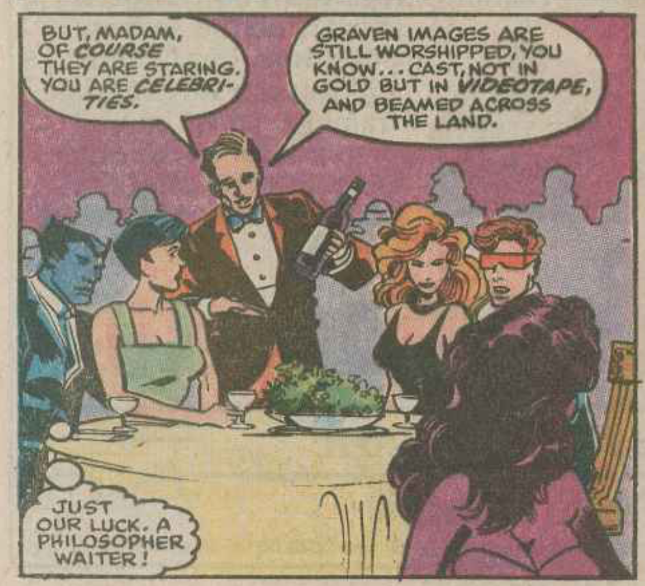 The manager of the restaurant which Locust attacks says they have superhero insurance.

The Grim 'n' Gritty 90s
Iceman goes to Opal's music store hoping to get a new Kate Bush CD; Bush is a British experimental pop artist (admittedly, I had to look her up).

Also, a subplot in this issue involves a store which sells music on CDs.

And of course, the copious amounts of blood spilled in the Archangel/Sabretooth battle is all colored black.

The Awesome and Terrible Power of Cyclops Archangel
Archangel spends the opening pages of this issue, before his battle with Sabretooth, angsting about his wings.

Young Love
Archangel encounters Charlotte Jones once again, while Iceman meets Opal for the first time and asks her out on a date, much to the dismay of the crushing Mole. 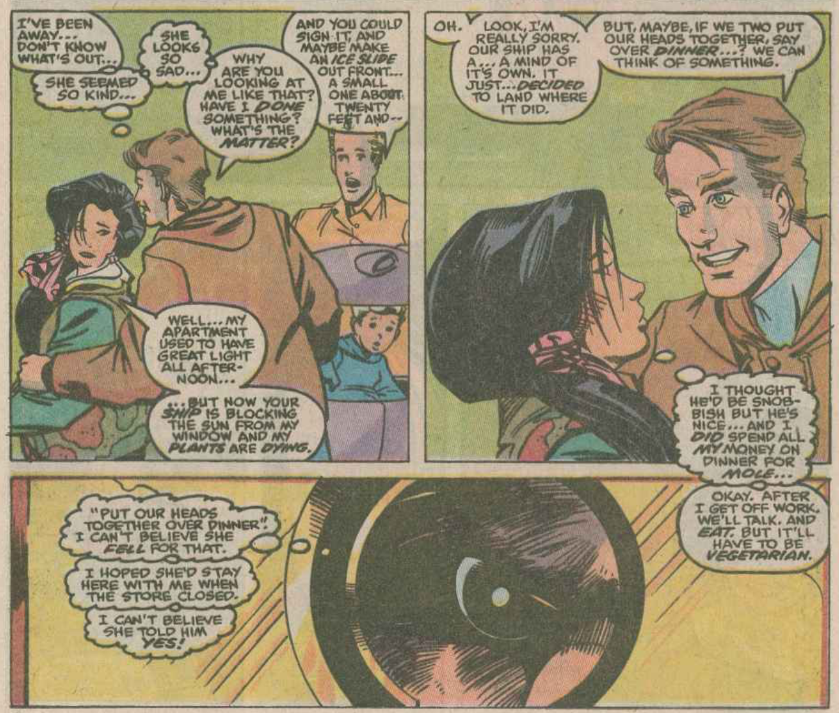 Meanwhile, Scott, Jean, Hank and Trish go on a double date together.

Teebore's Take
Though the Archangel/Sabretooth is the central action setpiece of this issue (and gets cover billing), the bulk of the pages are devoted to returning soap opera elements and the idea of X-Factor as celebrities to the book, via a pair of romantic encounters: Iceman meeting Opal for the first time and asking her out (while dealing with her fame-crazed boss) while the rest of X-Factor goes on a double date amidst stares from the crowd. That double date is problematic in that it doesn't present the characters too positively when read alongside New Mutants #87: either this issue takes place before the New Mutants returned to Earth, in which case X-Factor should be more concerned about their missing wards, or it takes place after, in which case X-Factor should be more concerned about Rusty and Skids (two of their earliest wards) falling in with the Mutant Liberation Front, a situation made more egregious by the fact that both books share the same writer.

But Simonson does use the double date as a vehicle to dust off an old Silver Age X-Men villain, something she really should have done more often given how much sense it makes to pit the revamped original X-Men against some of their old foes (revamped or otherwise). It makes for a nice nod to a bit of oft-ignored continuity, which is always appreciated. Given the recently-concluded long-running "Judgment War" (and, really, the sprawling "Inferno" before it) it's nice to see the book's focus get a little smaller, zeroing in on more self-contained, personal action sequences, the idea of X-Factor as celebrities, and characterization, even in that characterization is rendered a bit dicey by other titles.