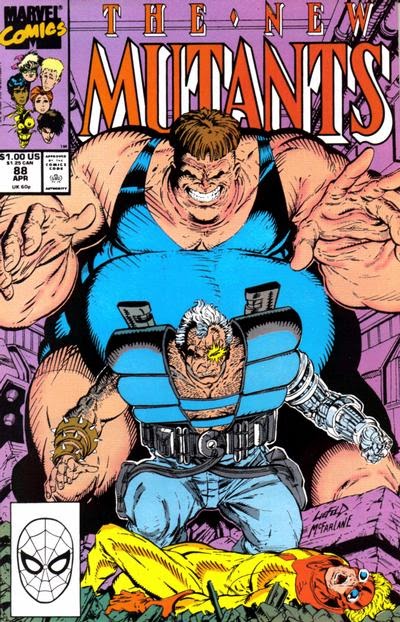 In a Nutshell
The New Mutants reunite with X-Factor while Cable battles Freedom Force.

Plot
Cable is interrogated by Freedom Force, who demand he helps them hunt down the MLF, who appear to be acquiring the elements needed to build a hydrogen bomb, or be executed as one of their members. Meanwhile, the New Mutants are reunited with X-Factor, arriving at the newly-sedentary Ship just as X-Factor finishes their press conference. As Cable escapes from his holding cell, X-Factor and the New Mutants watch footage of Freedom Force capturing Rusty & Skids. Though the New Mutants want to go after Freedom Force, Beast tells them to stay clear unless they're attacked directly, and Cyclops contacts Freedom Force, demanding the return of Rusty & Skids or else X-Factor will go to the law, and the press. As Freedom Force debates how to respond to X-Factor, especially given the fact they no longer have Rusty and Skids in custody, they learn of Cable's escape and chase after him. 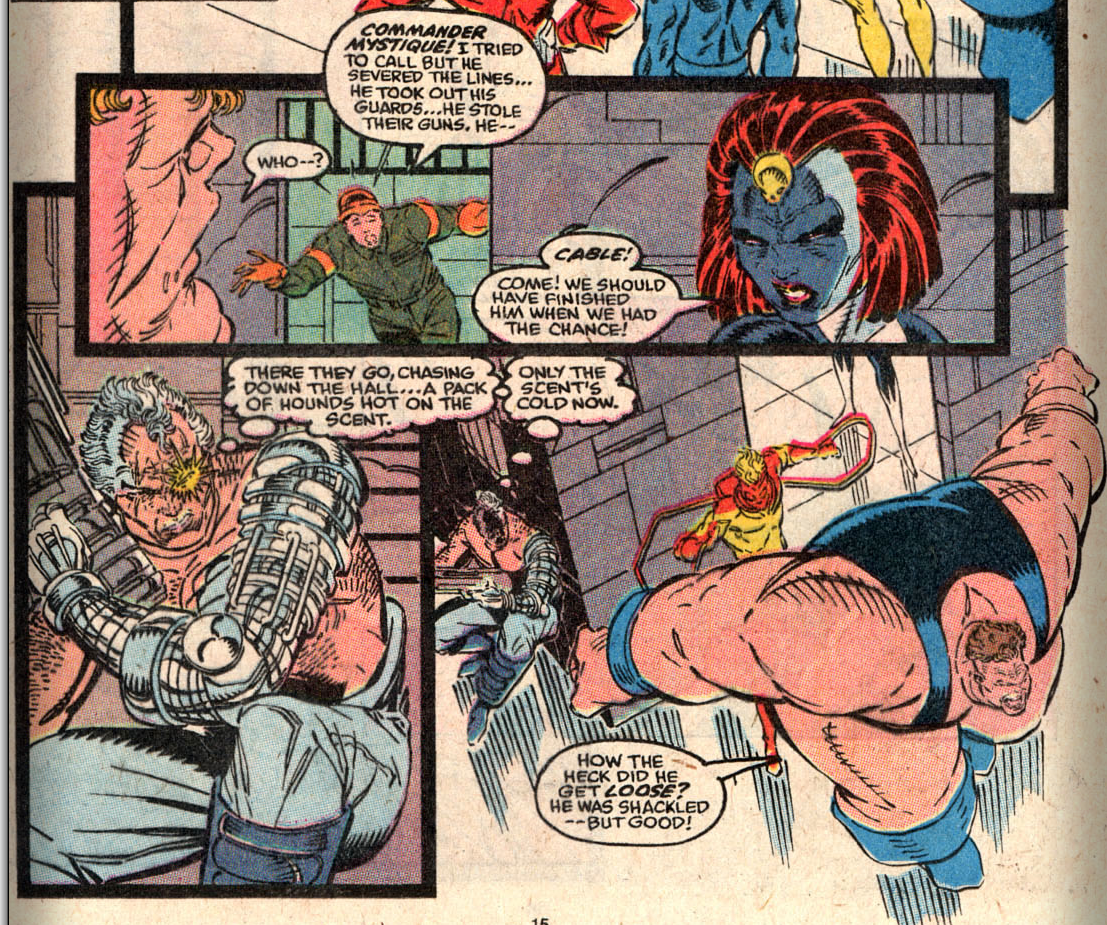 However, Cable fights them off and leaps out a window and runs off from the building. Back at Ship, the New Mutants contact their family members while Boom-Boom shows off a new look. In Washington, Cable heads for the chopper pad, pursued by Super Sabre and Blob. Meanwhile, Rahne contacts Moira. She and the rest of the New Mutants are shocked by Moira's aggressive appearance, and even more shocked when she orders Rahne to return to Muir Island. In Washington, Cable reaches a helicopter and takes off. Mystique, worried about how much Cable knows of their operations and the MLF's plans, orders Freedom Force to stop him at all costs.

Firsts and Other Notables
The New Mutants spot Ship landing and are reunited with the team in the midst of their press conference, just after an angsty Archangel flew off at the end of X-Factor #51, marking the first time X-Factor is seen on page with their ostensible wards since X-Factor #41. The New Mutants proceed to settle down in Ship again, which will once again be their home, briefly, until Cable leads them elsewhere. 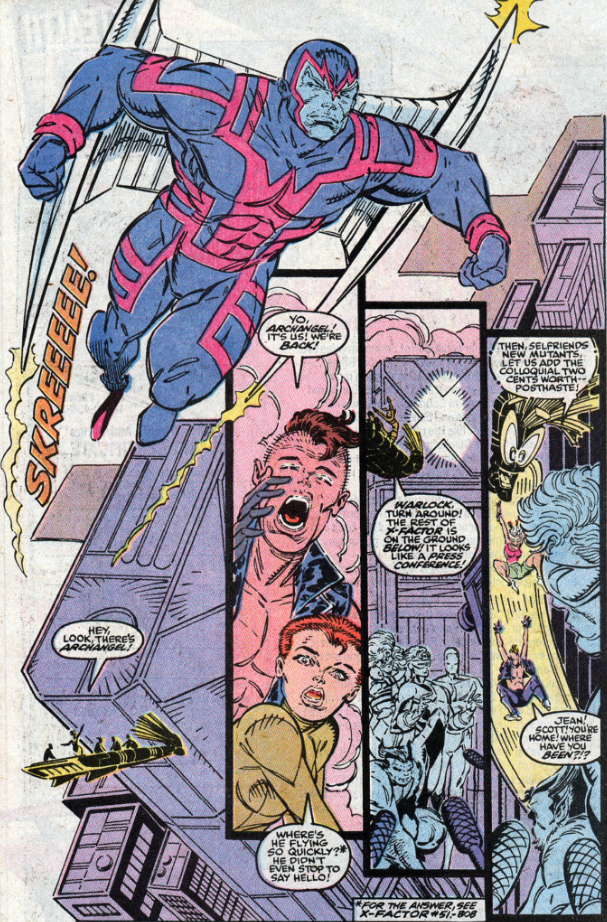 X-Factor learns about Freedom Force having targeted Rusty and Skids (though Rusty and Skids' abduction by the MLF is still known only to Cable and Freedom Force), and they spring into action to help their wards, one of whom is the very first mutant they rescued as X-Factor, by...leaving a very stern phone message for Freedom Force, then telling the rest of the New Mutants to stay clear of Freedom Force while X-Factor work things out. And that pretty much constitutes the entirety of X-Factor's efforts to help Rusty and Skids. 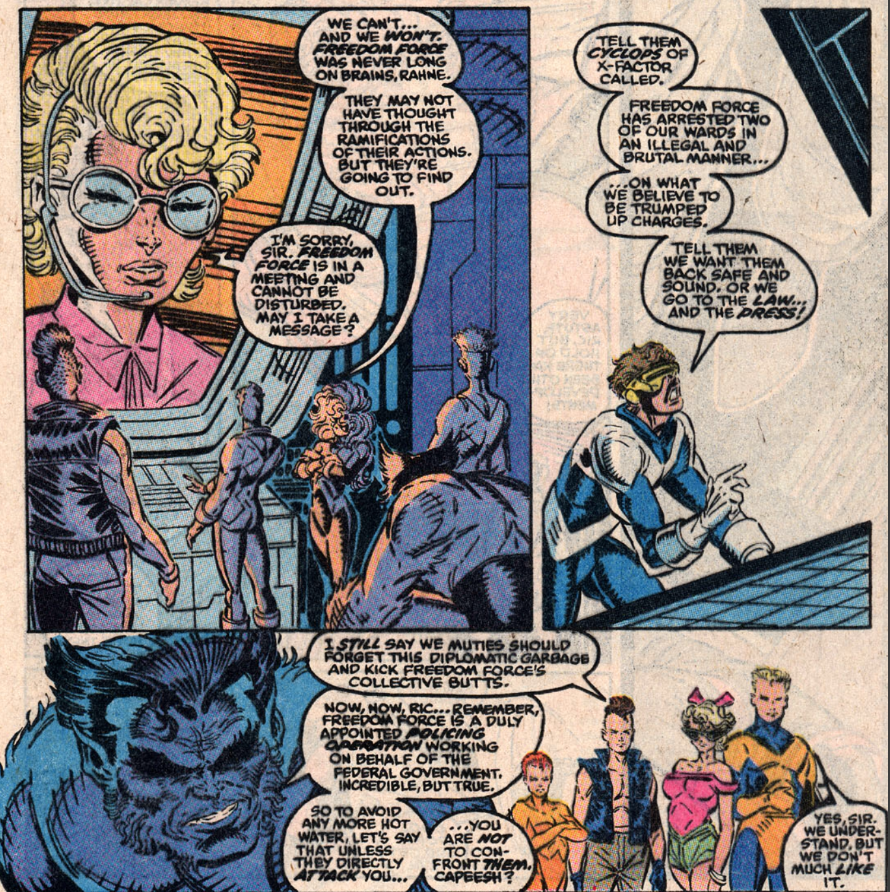 Dani is removed from the corner cover box as of this issue.

The Chronology Corner
Obviously, X-Factor's appearance here occurs during and just after X-Factor #51. Which of course means they're well aware of Rusty and Skids predicament when they're out on their dates in issue #52.

A Work in Progress
We learn in this issue that Freedom Force found Cable after the MLF attack last issue, and they're responsible for bringing him to the government holding facility he appeared in at the end of the issue.

Roberto says his mother is off on a dig, a nice reminder of her occupation, and that he has no desire to call his father (who is evil and technically still a member of the Hellfire Club's Inner Circle, not that those details have been mentioned much of late).

Uncharacteristically Sexy Moira pops up in this issue, and orders Rahne to return to Muir Island, saying the New Mutants' environment is no longer suitable for her in the absence of both Professor X and Magneto, though we're clearly meant to suspect darker motives given Moira's strange behavior through the X-titles of late. 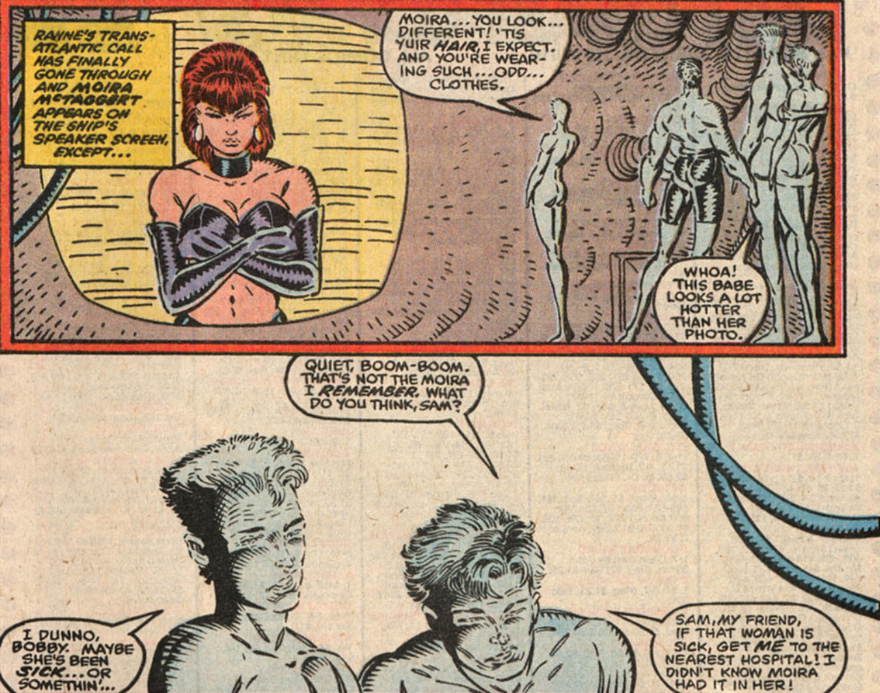 Skids is referred to as "Skids Blevins" in this issue, even though her actual first name is Sally. Similarly, Super Sabre is called "Silver Sabre".

The Cable Guy
This issue reveals that Freedom Force knows of Cable and vice versa (which isn't too far fetched, given that last issue established he's known to the military). They also say he has quite the record.

Cable repairs his bionic hand, damaged in the previous issue, an act which doesn't really gel with the later revelation that his bionics are actually a creation of the techno-organic virus he struggles to keep in check. He also keeps vials of acids tucked away in his metal arm as of this issue.

His reputation is also such that the generic soldiers guarding him consider him a legend, and treat him with a certain level of respect despite his position as their prisoner. 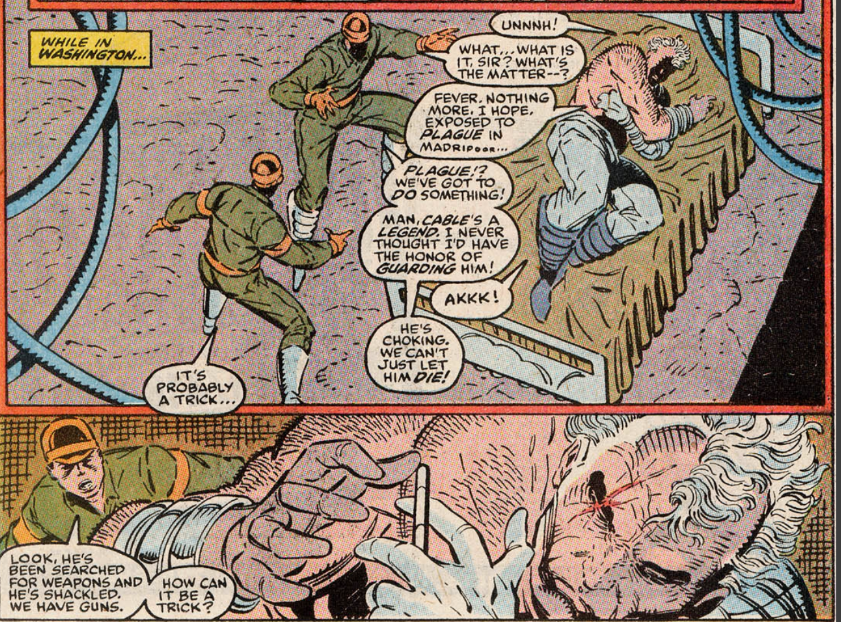 A point is made that Cable doesn't kill Super Sabre when he has a chance (echoing a similar scene with Storm from Uncanny X-Men #216), yet at the same time, Cable has no compunctions against blasting away at Freedom Force with a gun (maybe they were all warning shots?). 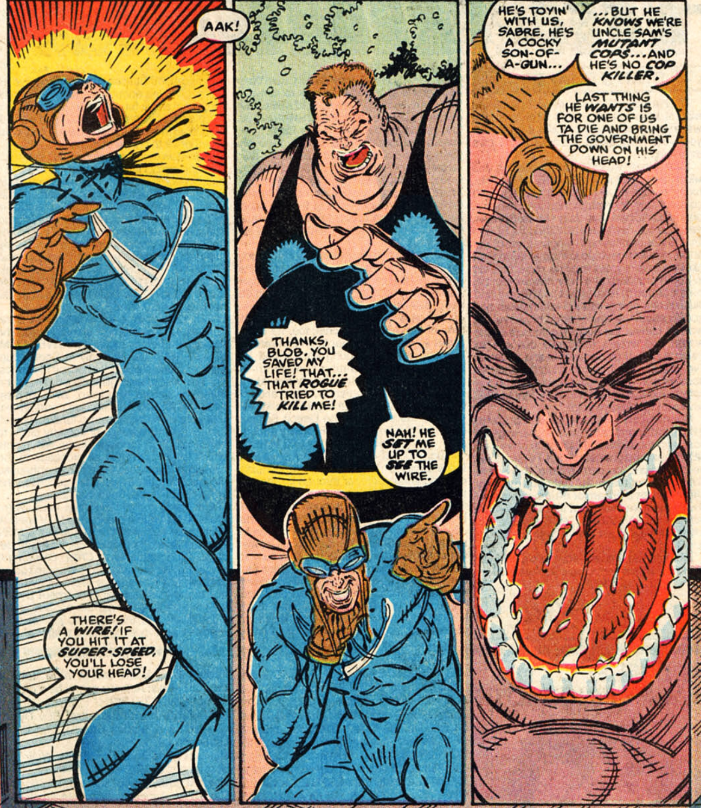 Young Love
Rictor is clearly smitten with Rahne as of this issue, much to the dismay of Boom-Boom (who mostly seems bothered by how oblivious Rahne is to it all). 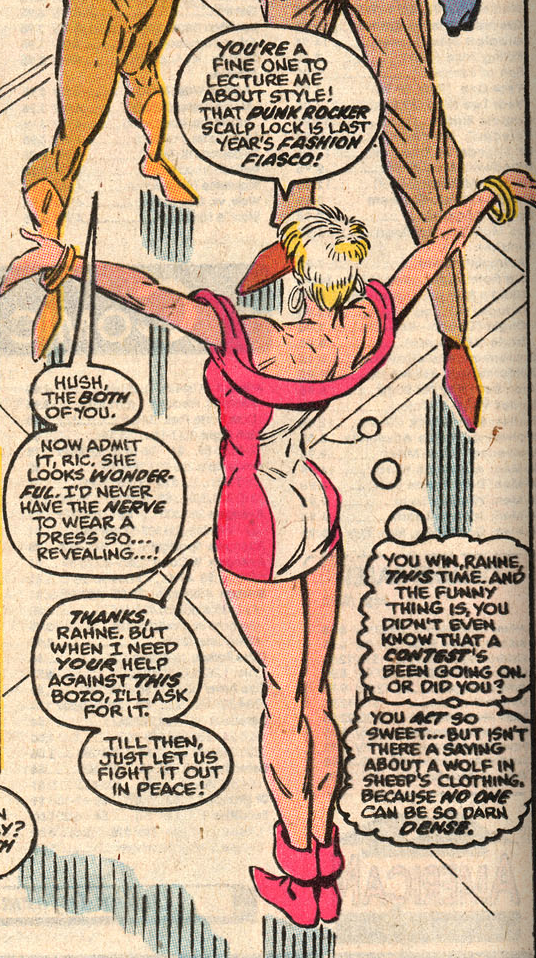 501 Genes
You'll note everyone in the cover is positioned such that their feet are obscured.

Cable sits at the foot of a bed, apparently dangling his legs up and over a foot board. 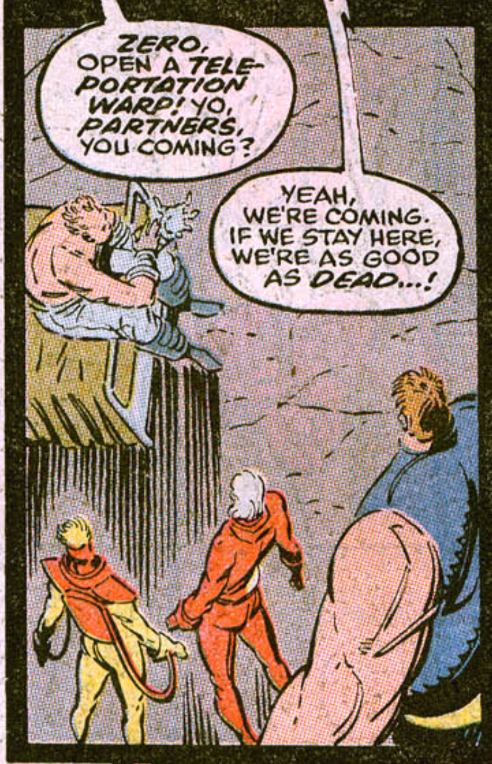 This issue contains one of the more infamous examples of Liefeld's bad anatomy, as Boom-Boom emerges wearing a head-turning dress. While Liefeld makes sure we know exactly where her sexy parts are, he's not too sure about her legs, as one of them looks to be coming out of her waste sideways, while she's also apparently become a ballet dancer and is poised mid jump or developed the mutant power to float slightly off the ground.

That said, Teen Teebore was never terribly concerned with her feet.

The gun Cable acquires when escaping Freedom Force is just laying on the ground randomly after he jumps out a windo. 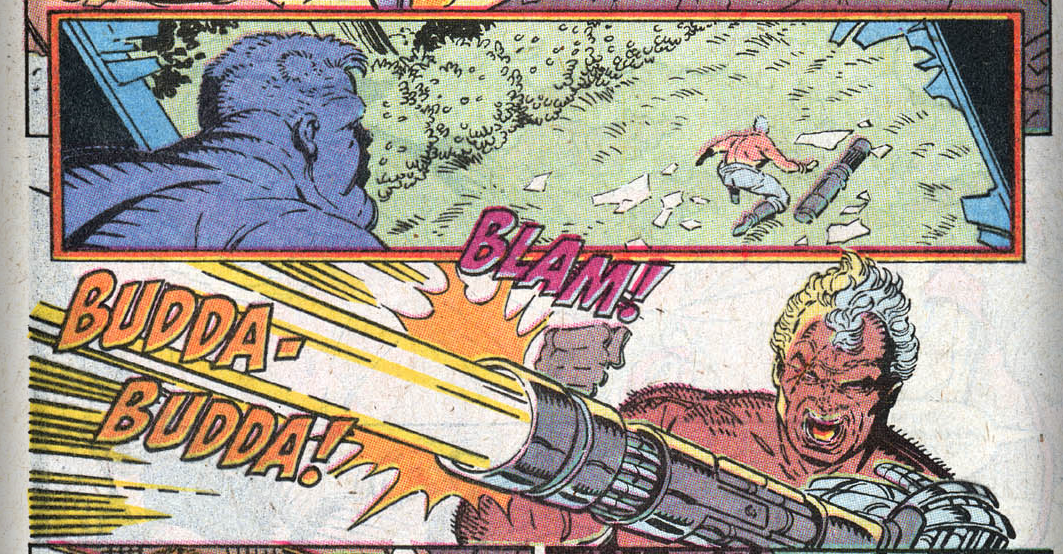 Rob Liefeld on his favorite New Mutant
"Rusty and Skids come to me the easiest and they are easily my favorites. I see them as like updated versions of Johnny Storm and Sue Storm...one has flame, and ones has a shield power. Boom Boom's a lot of fun to draw. I'm still trying to get a handle on drawing Rictor and Cannonball. Warlock's a tremendous amount of fun. I like them all a lot."

Rob Liefeld on being the regular artist of a series
"You can't change somebody's hair style or draw them the way you see them when it's in the context of a fill-in. On The New Mutants, I'm going wild. I figure the way the look will have dramatically changed by my sixth issue, because I'll be finding my niche with these characters, how to draw them best the way I see them. It's all a matter of feeling ore comfortable with them"

Teebore's Take
Cable's introductory romp through New Mutants continues apace, as he busts out of military holding and takes on Freedom Force, in the process affirming just what a Super Awesome Cool character he is already while giving Rob Liefeld plenty of action scenes to draw. Meanwhile, the characters who remain the titular stars of the series go about settling in after their long Asgardian sojourn, reuniting with X-Factor and getting in touch with their families. This is the material in the issue that really shines, as it harkens back to the more character-driven elements of the series, complete with the ongoing soap opera that is Rahne's never-ending string of romantic crushes involving teammates. There's definitely something cathartic in seeing Cable trounce Freedom Force, the group which so stymied Rusty and Skids and which led to their departure from the book, and having all the other characters talk about how cool and badass and legendary Cable is beats having the narration just tell us as much. But it's still very refreshing to see the kids being kids again, given a chance to just hang out and catch up and angst about feelings and stuff. Cable is here, but glimmers of the book that was still remain.