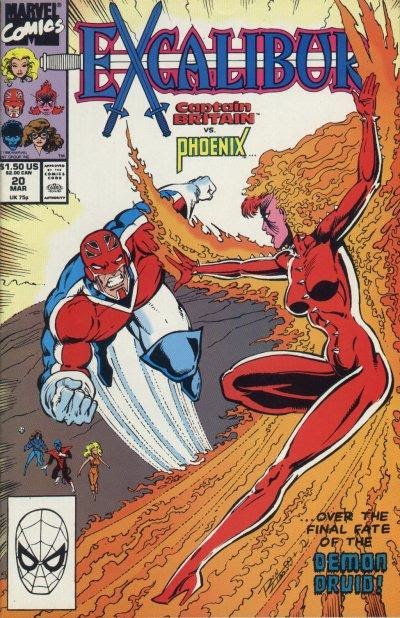 Plot
At Arthur's Seat in Scotland, a portal suddenly opens, from which Demon Druid emerges. Meanwhile, Nightcrawler tries to console Meggan, who is upset with the way Brian has been treating her. She flies away to London, where she spots Brian on a date with Courtney Ross, but is distracted by Demon Druid, who is constructing a replica of Stonehenge out of energy. The two fight one another, drawing the attention of a barhopping Rachel and Kitty, who join the fight as well. When Kitty phases through Demon Druid, she senses his true goal before the effect causes him to disappear. Later, at Excalibur's lighthouse, Kitty is working on a device when Brian returns from his date, but he's rude to Meggan and storms off before helping Kitty. 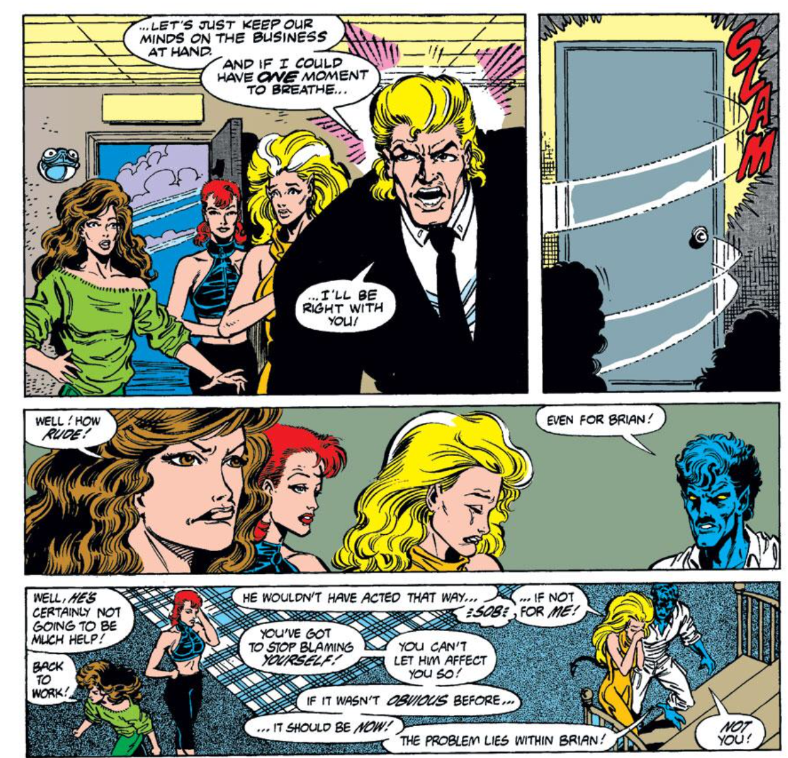 The next morning though, Brian helps finish the device, just as the news reports on Demon Druid creating another facsimile of Stonehenge atop the Darkmoor Nuclear Research Facility. Brian rushes off on his own to battle Demon Druid, leaving the rest of the team to teleport there through a combination of Phoenix and Nightcrawler's powers. Once they arrive, Kitty begins interfacing Widget with her new device, while Captain Britain attacks Demon Druid, forcing Phoenix to intervene, worried their battle will endanger the surrounding areas. But Kitty and Widget manage to open a portal that will return Demon Druid to his own people, his goal all along, and he departs, leaving Excalibur to admonish Captain Britain for acting so foolhardy and to marvel that they saved the day despite themselves.

Firsts and Other Notables
This is a fill-in issue by Michael Higgins and Ron Lim, completely unrelated to the "Cross-Time Caper". Placing the story chronologically is tricky; it seems like it should take place between issues #5 (when Courtney Ross is replaced by Sat0yr-9) and #6 (when the "Inferno" tie-in starts), yet Widget is on hand, with Kitty having developed enough of a rapport that she can call on Widget for reliable help, which didn't really happen until after "Cross-Time" began.

The villain of the story is Demon Druid,a one-off Thor villain who will eventually be revealed to be a Kree Eternal named Ultimus and join the Kree Starforce during "Operation: Galactic Storm". 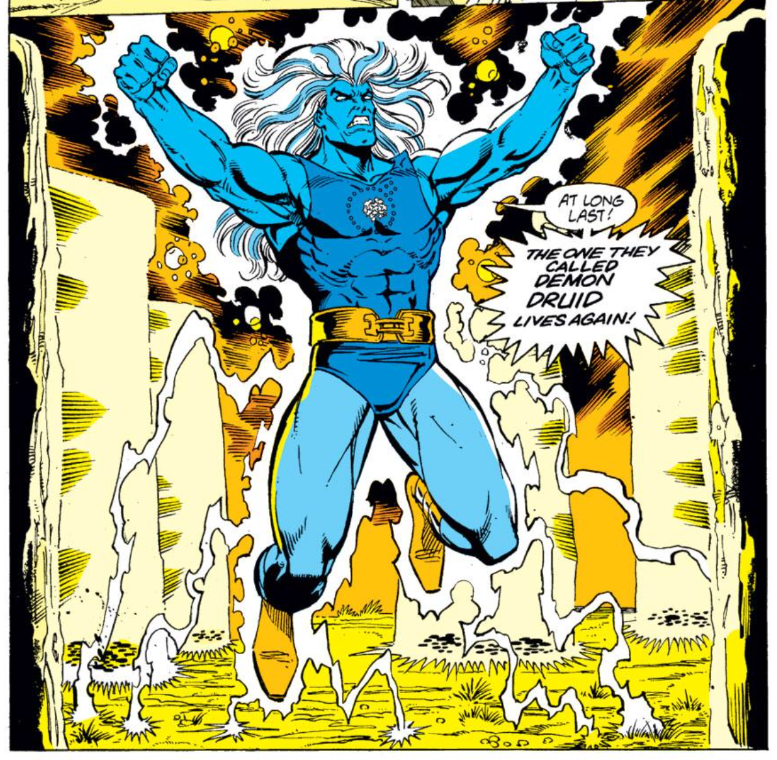 A Work in Progress
Demon Druid performs his ritual at the Darkmoor Nuclear Research facility, which is where Brian first attained his Captain Britain powers. 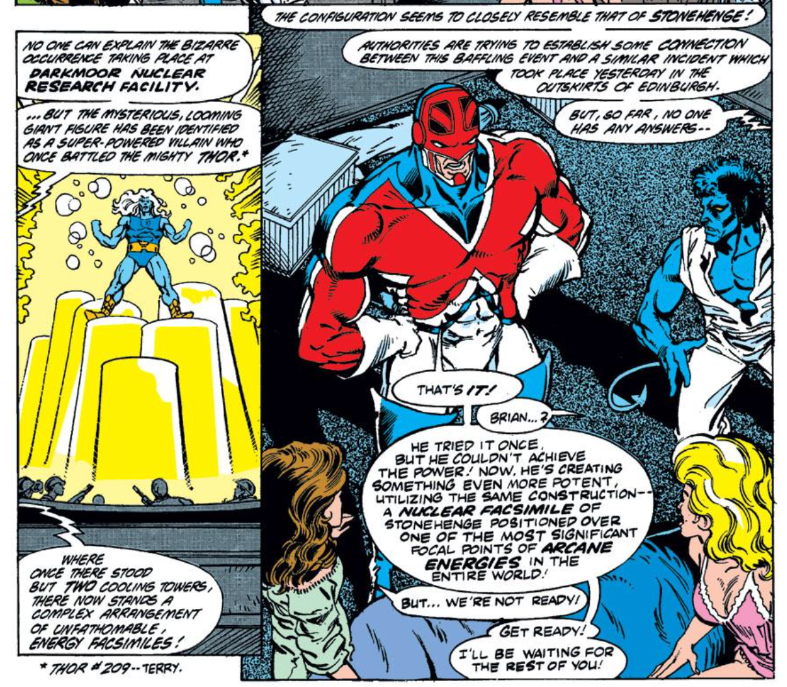 With Phoenix boosting his power, Nightcrawler is able to teleport the entire team from the lighthouse to Darkmoor, despite his usual limitations on distance and his current "teleporting is a strain" limitation, making one wonder why Phoenix doesn't just boost his power all the time. 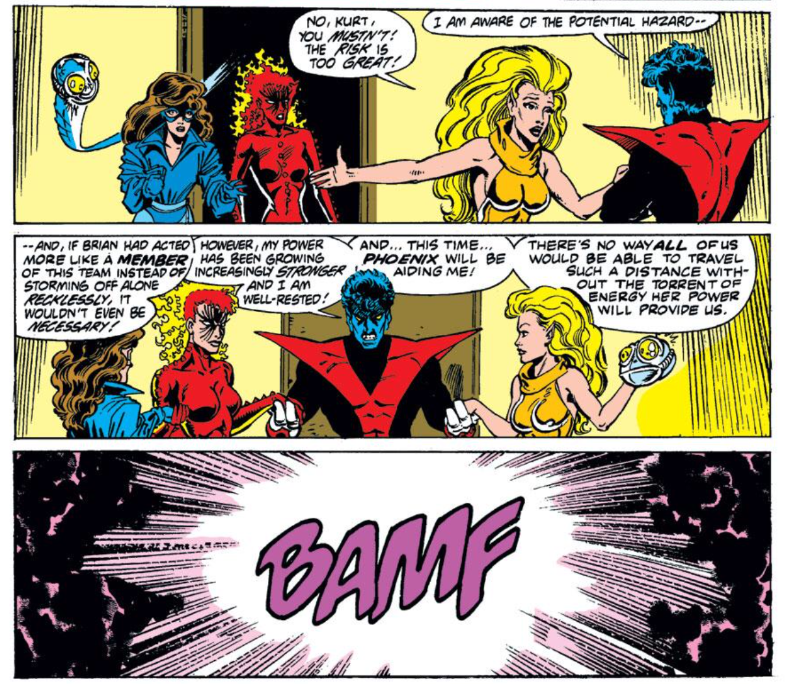 The Reference Section
Meggan transforms into Godzilla during her initial attack on Demon Druid. 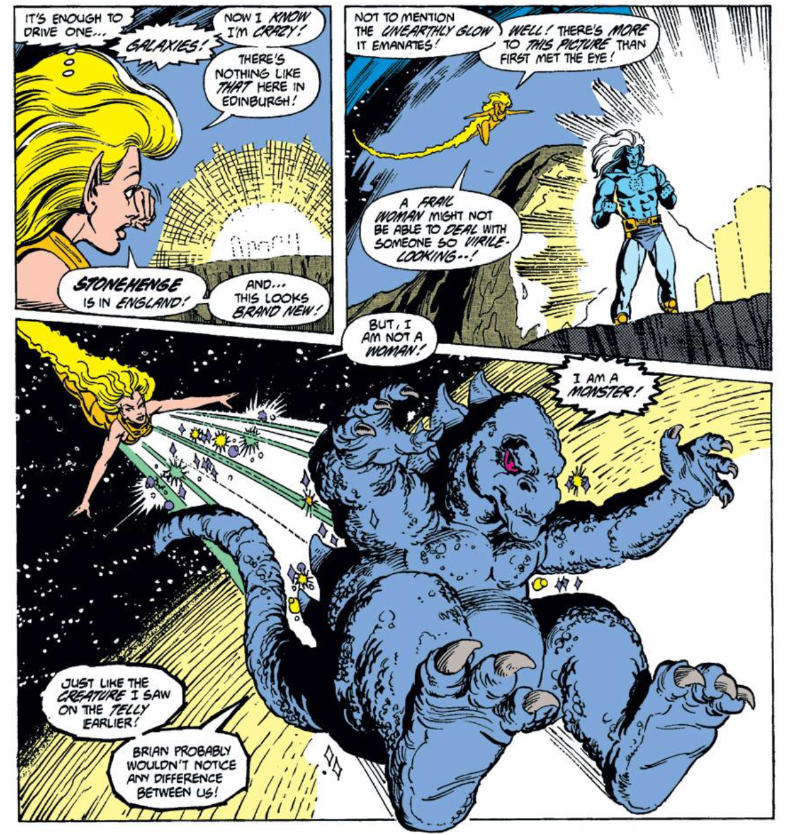 Young Love
Brian is still two-timing Meggan at this point, stringing her along while also dating Fake Courtney Ross. 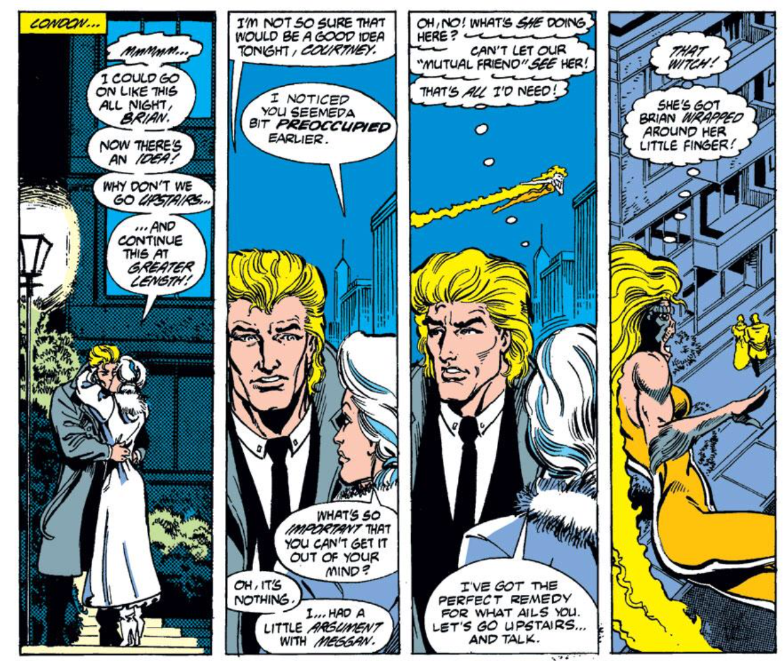 Nightcrawler remains flummoxed by the situation, fighting his own feelings for Meggan and his disbelief at how Brian is her treating her. 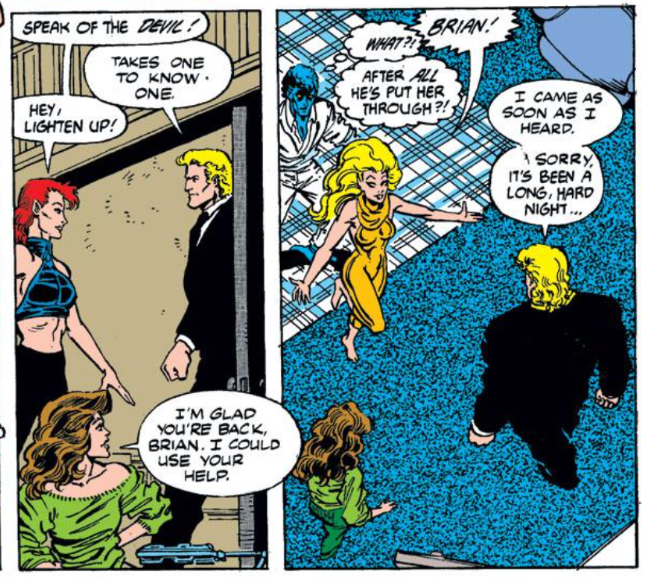 Teebore's Take
You know what the "Cross-Time Caper" doesn't need? An unrelated fill-in issue that does nothing but prolong an already interminably long story. This issue on its own is fine; the characters' voices are way off model to the point that it's clear Claremont didn't write the dialogue even without looking at the credits (Brian, in particular, is written as being very rude, petulant and brash to the point where it seemed liked his attitude was going to be a plot point), but the art is serviceable enough, and the "Cross-Time Caper" has dragged on so long now and advanced the series' narrative so little that even though this story is set in the past, things like Meggan's frustration at Brian's philandering and Nightcrawler's conflicted feelings about Meggan are still as relevant now as they would have been if this story was published closer to when it takes place, which keeps it from feeling like a complete waste of time. But it's still just a fill-in issue interrupting a long-running storyline, one which, at this point, seems like it may never end.