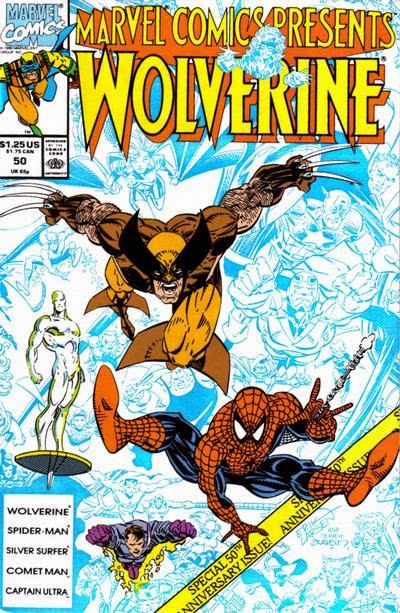 In a Nutshell
Wolverine and Spider-Man team-up to rescue a girl and her father from a group of evil mutants.

Plot
Issue #48: Swinging through the city, Spider-Man spots Wolverine and, thinking he's someone posing as the dead X-Man, attacks him. However, he eventually realizes Wolverine means him no harm, and assumes he's a ghost of some sort. Wolverine then fills Spider-Man in on the situation: he's tracked a young mutant girl and her father kidnapped by a group of evil mutants to a nearby warehouse. He and Spider-Man sneak into the building, but are stopped by a gun pointed at Wolverine's head. Issue #49: Wolverine and Spider-Man dodge the laser guns firing at them, with Wolverine careful to maintain the ruse that he's still dead. After destroying the cannons, they're attacked by the evil mutants. As Wolverine battles the animalistic Bloodlust, Spider-Man realizes their leader, Critical Mass, is an old classmate of his. 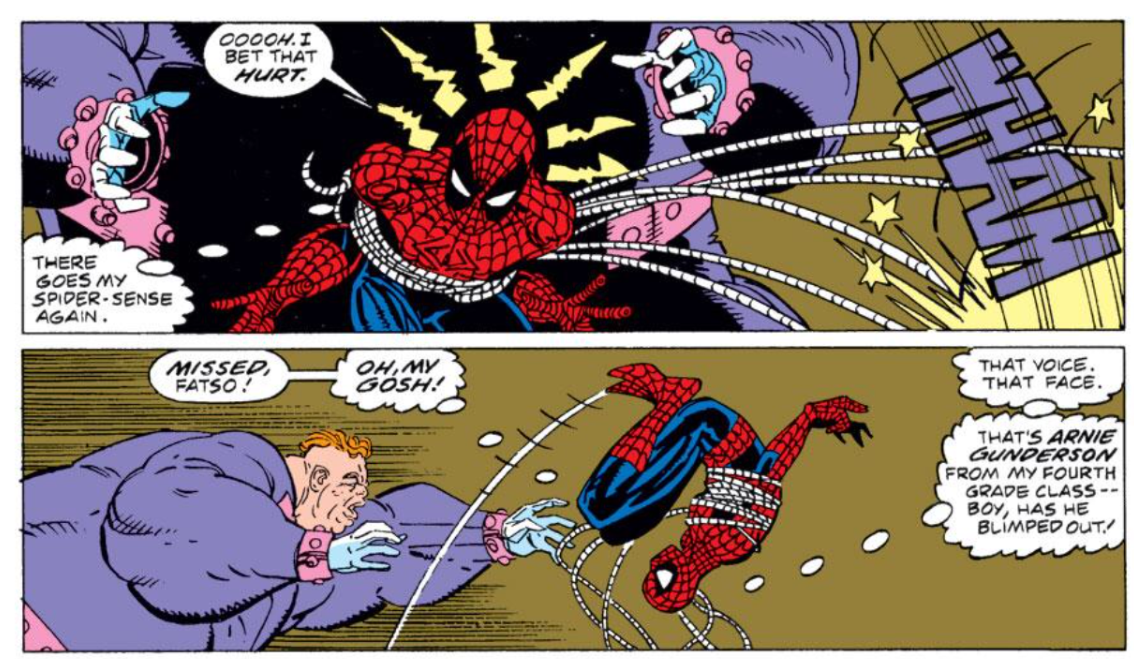 Just then, the other two members of the team, threaten the mutant girl's father, so she uses her power to knock out Wolverine and Spider-Man. Issue #50: Wolverine and Spider-Man regain consciousness and resume their battle with the evil mutants, but when one of them threatens the girl, she uses her power to trigger an explosion that seemingly kills everyone but Spider-Man. Later, at an airport in Kansas, Wolverine says goodbye to the girl and her father, whom he's setup with new identities, telling "Mr. Beck" it's time for Wolverine to move on.

Firsts and Other Notables
When Spider-Man first encounters Wolverine in this issue, he believes he's an imposter, as Spider-Man, like everyone else, thinks Wolverine is dead. Once he realizes Wolverine isn't a threat to him, he decides he must be a ghost, and Wolverine does his best to act accordingly throughout the rest of the story. 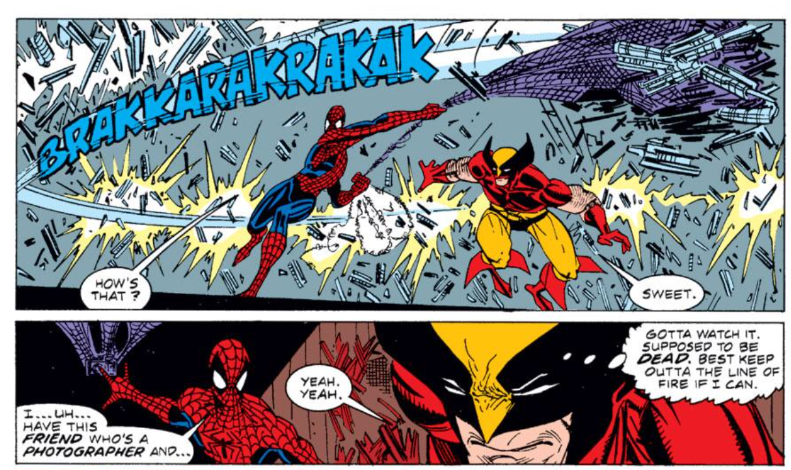 The villains of this story are a four person team of evil mutants (and a fifth seemingly-human member), all of whom appear for the first time in issue #49. The two female members, Whiplash and Bloodlust, will appear again later in Amazing Spider-Man as part of the Femme Fatales, a team of female villains that hangs around the fringes of the Marvel Universe for a few years. The leader of this team is the obese Critical Mass, who is revealed to be Spider-Man's heretofore unmentioned fourth grade classmate Arnie Gunderson. The rest of the team is comprised of an unnamed person who looks a lot like the future Savage Dragon and a guy dressed like the burglar who killed Uncle Ben and claims to be his brother, who is also Spider-Man's dentist (which he discovers in a panel homaging his discovery of the burglar's identity in Amazing Fantasy #15). Aside from the two women, I don't believe any of them ever appear again. 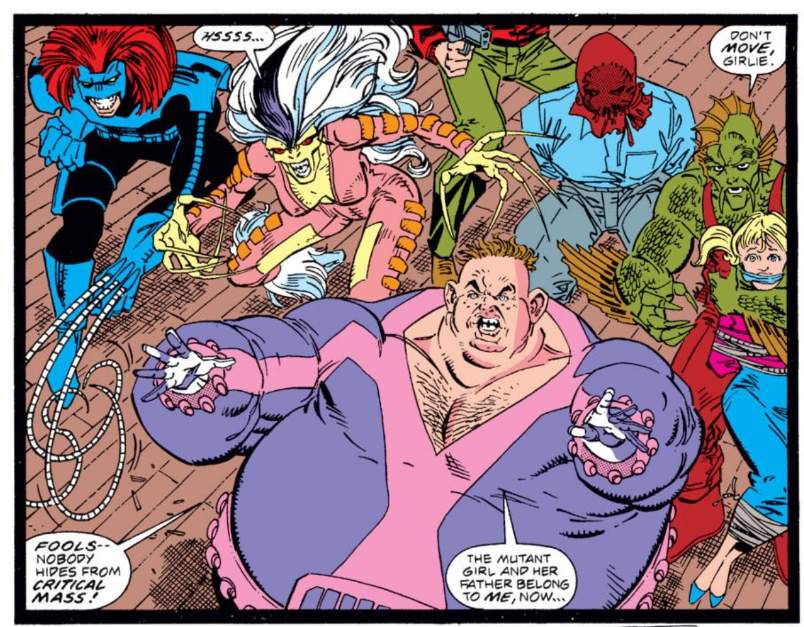 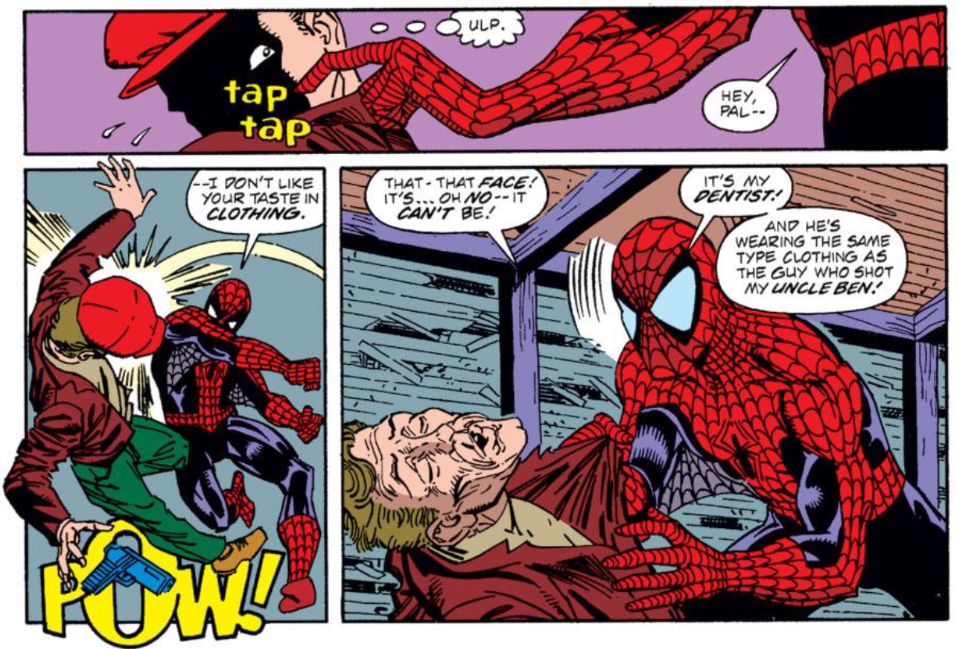 The final page of the issue implies, for whatever reason, that the girl being held captive in the story was Fawcett/DC's Mary Marvel, and that her "father" is Captain Marvel (the original one who shouts "Shazam!" to transform into his superhero persona), and that Wolverine was alerted to the situation by Captain Marvel Jr. aka Freddy Freeman. 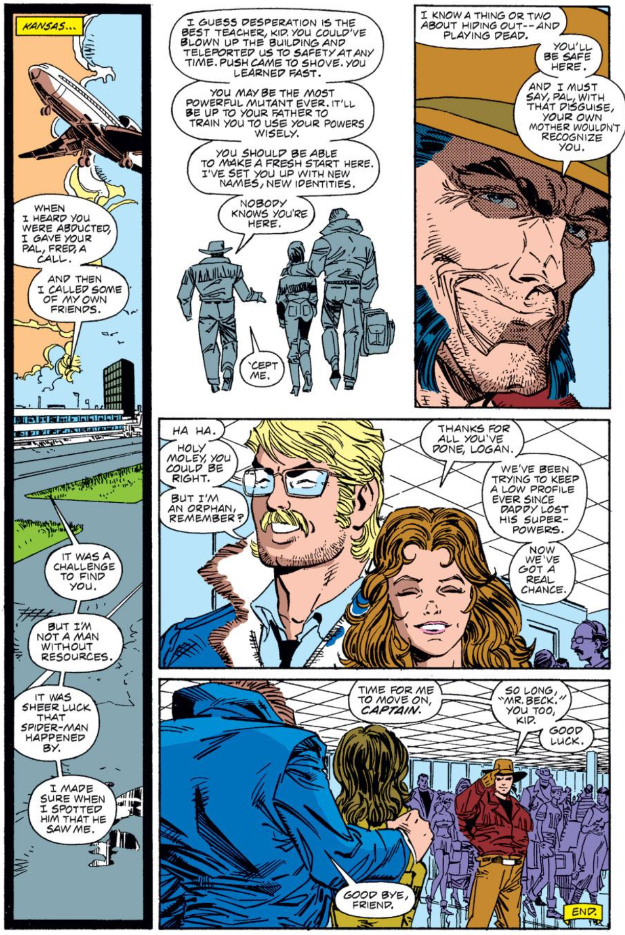 Issue #48 includes a standalone Storm/Dr. Doom story. Neither Marvel Unlimited nor the other copies of that issue that I have include it, so I didn't read it, but I assume it's on the level with most of the other done-in-one MCP stories, that is, mostly superfluous. The GCD tells me it's about the two characters teaming up to save Latveria's forests, so there you go.

The cover to issue #50, celebrating the fiftieth issue of the series, features nearly every character to appear in the book thus far, and is a true wraparound cover, in that the far right side lines up with the far left side.

A Work in Progress
In issue #48, Spider-Man gives us a rundown on all the crazy goings-on in his life at the time. 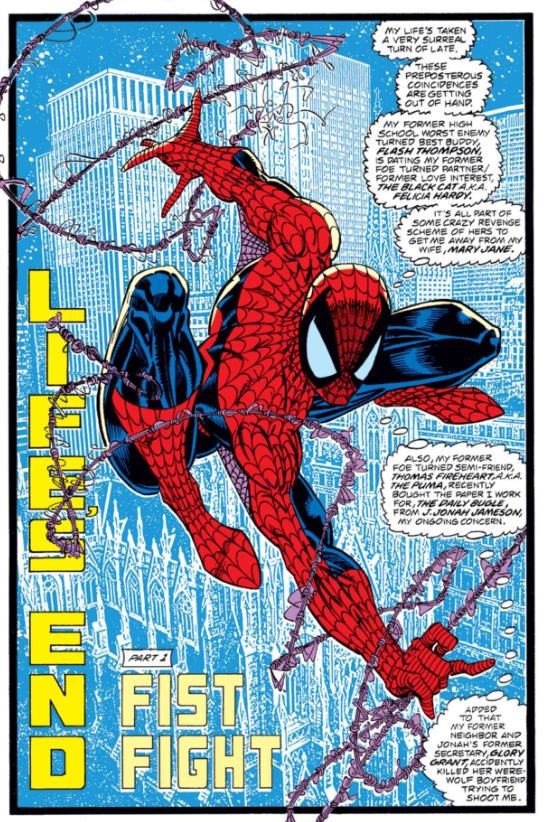 Winking to the audience, he also questions the revelation that Ned Leeds was the Hobgoblin. 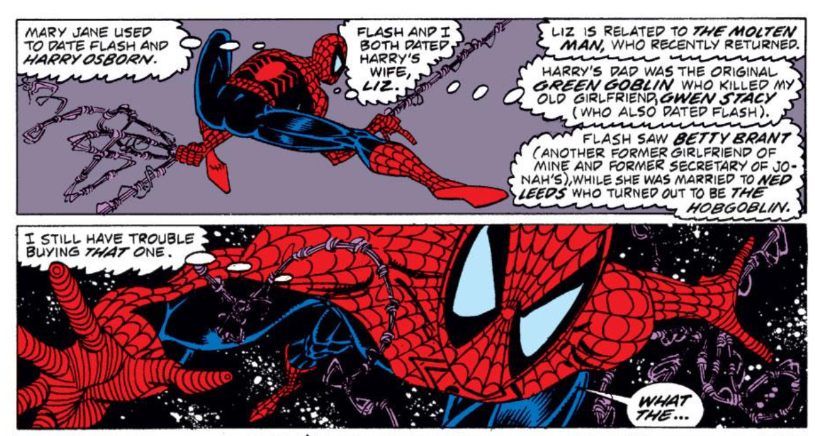 After realizing Wolverine (imposter, ghost or whatever) means him no harm, Spider-Man also laments his tendency to always start by pummeling people, another fourth wall-breaking nod, this time at the tradition of two heroes fighting each other before teaming up against the real villain. 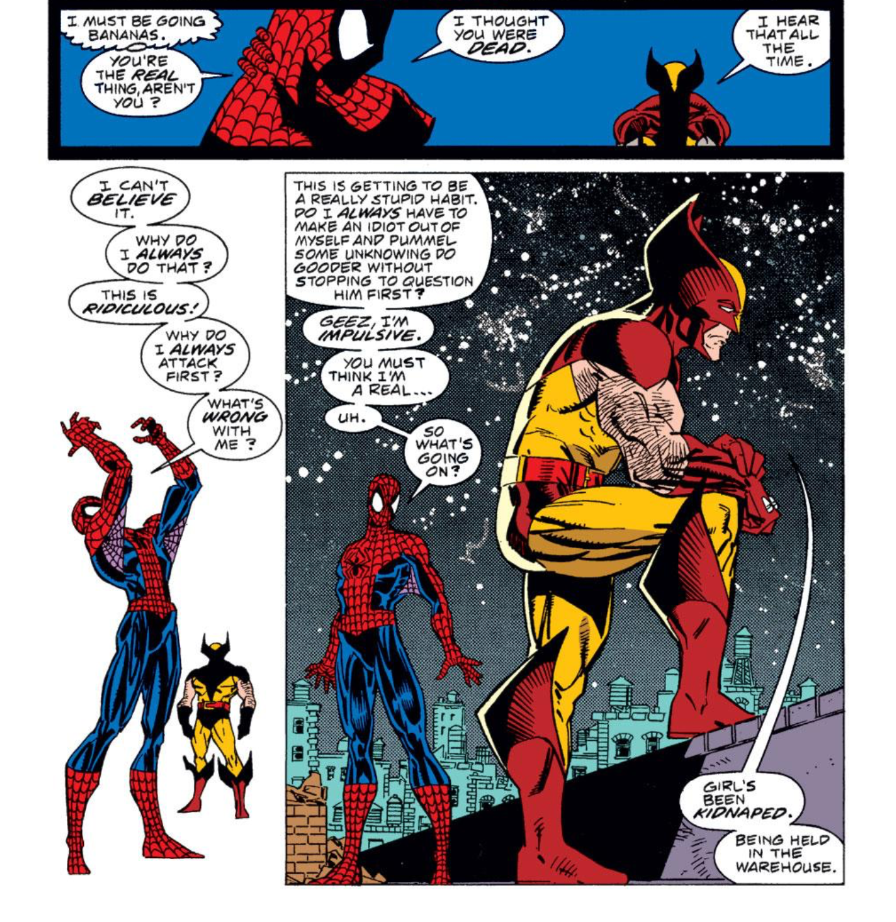 The majority of the action in this story takes place in a warehouse that happens to be the same warehouse where Spider-Man confronted Uncle Ben's killer in his first appearance. 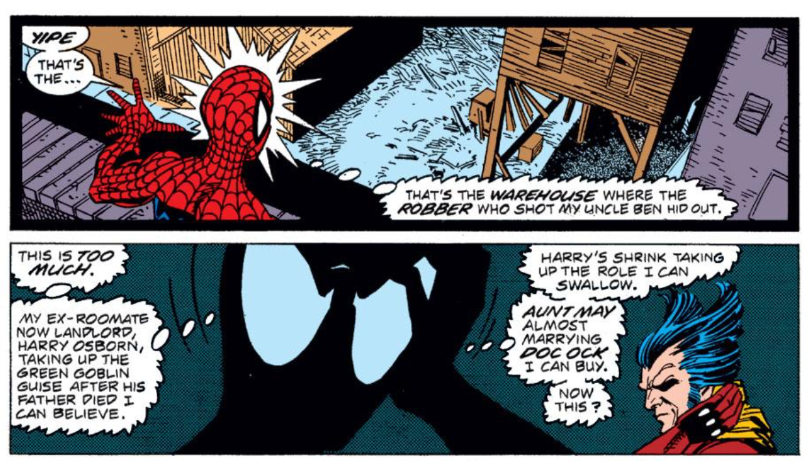 The story ends with Peter bemoaning the abundance of coincidences in his life, and also learning that Wolverine is, of course, absent from all the pictures he took, further reinforcing Peter's belief that Wolverine was a ghost. 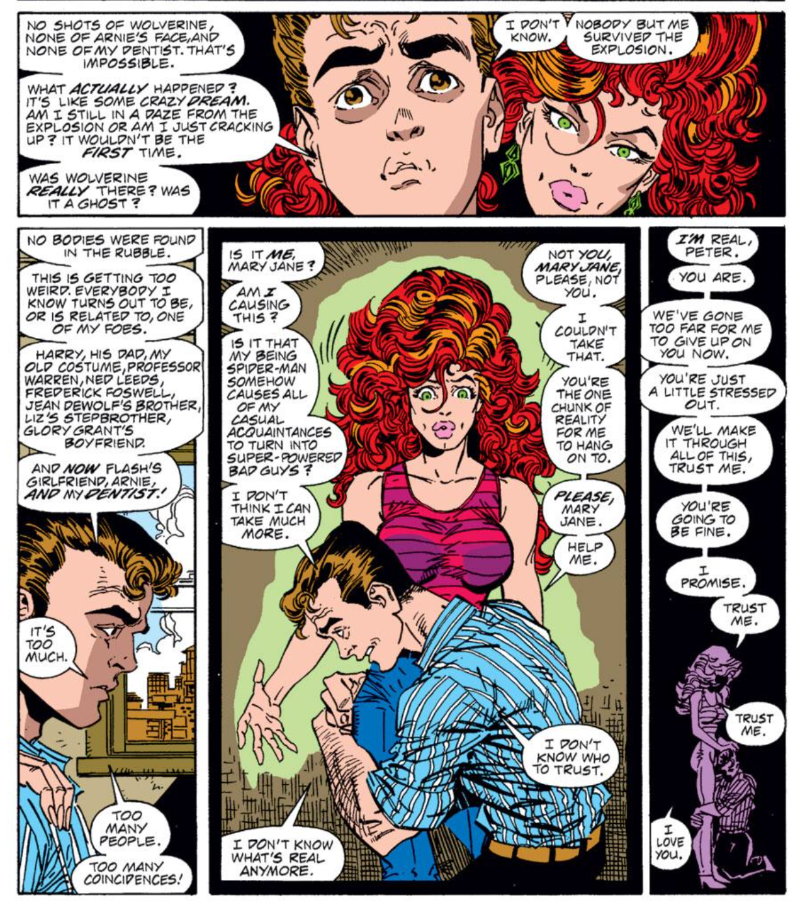 The Best There Is At What He Does
As of the last page of the story, I suppose we can count the Marvel family as even more previously-unknown old friends of Wolverine's.

Teebore's Take
Though it gets some mileage out of the idea that Wolverine is considered dead and so has to act the part to maintain the ruse, this is essentially a Spider-Man story, one with its tongue planted firmly in its cheek as it points out and gently mocks the number of coincidences and level of absurdity in Peter Parker's life at the time (and this even before the whole Norman/Gwen/Goblin Twins business), featuring villains like a fourth grade classmate of Peter and the brother of the burglar who killed Uncle Ben to ram home the point. Whether it's the presence of Spider-Man, the fact that he wrote the story as well or something else entirely, Larsen's art is stronger here than in the early Excalibur-led and similarly tongue-in-cheek MCP story he drew, and that plus the shorter page count (at eight pages across three issues, this isn't much longer than single standard issue) helps immensely in keeping the gag from becoming tired. The end result is a story that, while far from a must-read, especially in terms of the X-narrative, is still rather fun, which is a marked improvement over most of the other Marvel Comics Presents stories thus far.

Next Issue
Tomorrow, the "Cross-Time Caper" resumes in Excalibur #21, while Wolverine's Central American tainted drug adventure concludes in Wolverine #23 on Friday. Next week, the full debut of G.I. Joe, er, Hardcase and the Harriers in Uncanny X-Men #261.