In a Nutshell
Wolverine gets caught up in a Madripoorian crime war.

Plot
In Madripoor, Chancellor Ranjamaryam is chased through Lowtown  by two super-powered beings who ultimately kill him. Later, Wolverine arrives on the scene as Police Chief Tai pulls the body from the river. Noting that the chancellor was prepared to recommend that the Prince acknowledge Tyger Tiger as the new crime lord, they worry that a gang war may be upon them. Elsewhere, Roughhouse and Bloodscream, the two people who killed the chancellor, rough up pilot Archie Corrigan, telling him he works for their general now, not Tyger. Meanwhile, Wolverine investigates the chancellor's death, sneaking into his palace compound, where he notes a familiar scent. He follows it to a hotel in Hightown, where he finds former New Mutant Karma. She tells him she's working for her uncle, General Coy, for reasons of her own, and Wolverine tells her she needs to decide whose side she's on. 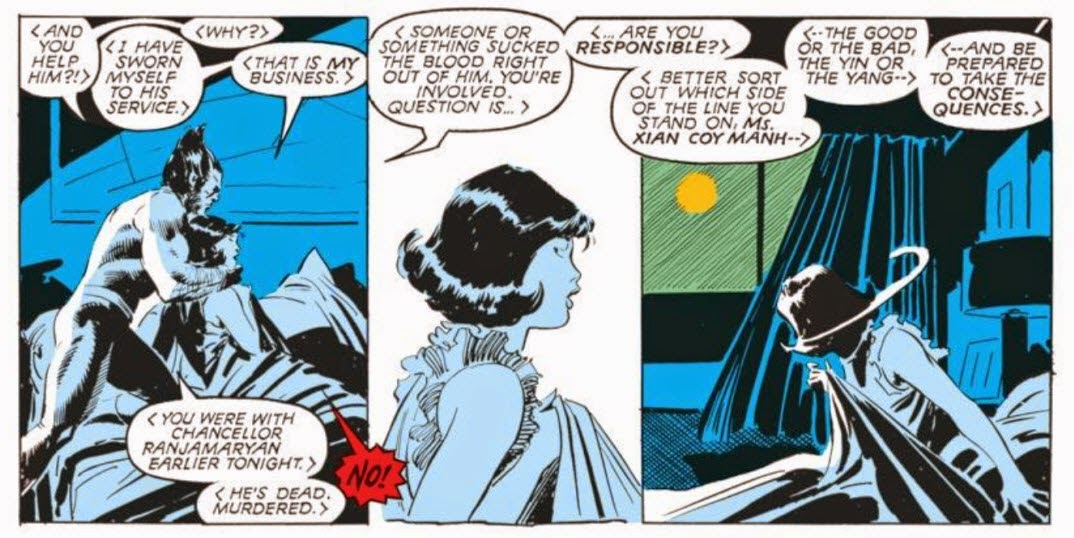 The next day, Jessica Drew and Lindsay McCabe are shopping in Lowtown when they come across a badly injured woman running into the market. Jessica tracks her location and discovers a room filled with Tyger's people, all slaughtered, and she realizes they've landed themselves in a gang war. Later, Wolverine escorts Tyger Tiger to the Prince's palace, but they're ambushed by Roughhouse and Bloodscream. However, Karma suddenly appears, taking control of the villains' minds, enabling Wolverine and Tyger to escape. At the Princess Bar, Wolverine tasks Jessica and Lindsay with getting the injured Tyger to a safehouse, and the then leaves to visit Corrigan, calling in Tyger's marker. Meanwhile, Roughhouse and Bloodscream report to General Coy that they've failed to kill Tyger as a distraught Karma looks on, wondering what she's going to do.

Firsts and Other Notables
This issue is the first appearance of villains Roughhouse and Bloodscream, both of whom will be recurring antagonists for Wolverine throughout the series. The former, who is incredibly strong and resiliant, will eventually be revealed to be Asgardian, while the latter (called Bloodsport throughout this story; he's Bloodscream in all subsequent appearances) is a long-lived vampire-like creature. 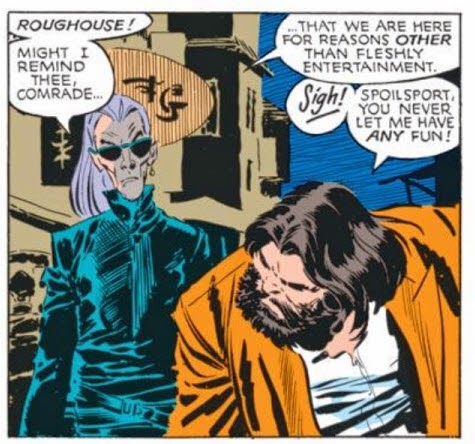 Archie Corrigan, the owner/operator of a small airline in Madripoor, also appears for the first time. He too becomes a fixture of the series moving forward. 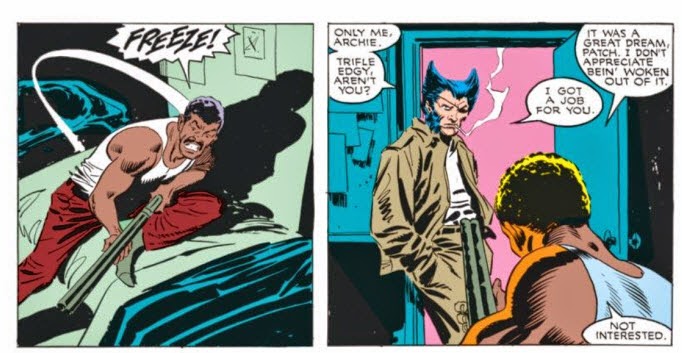 Hey, remember Karma? Last seen leaving the New Mutants to try and find her missing siblings, she pops up here working for her villainous uncle (whom we last saw way back in New Mutants #6), General Coy. It will shortly be revealed that she is working for him in exchange for information regarding those siblings. 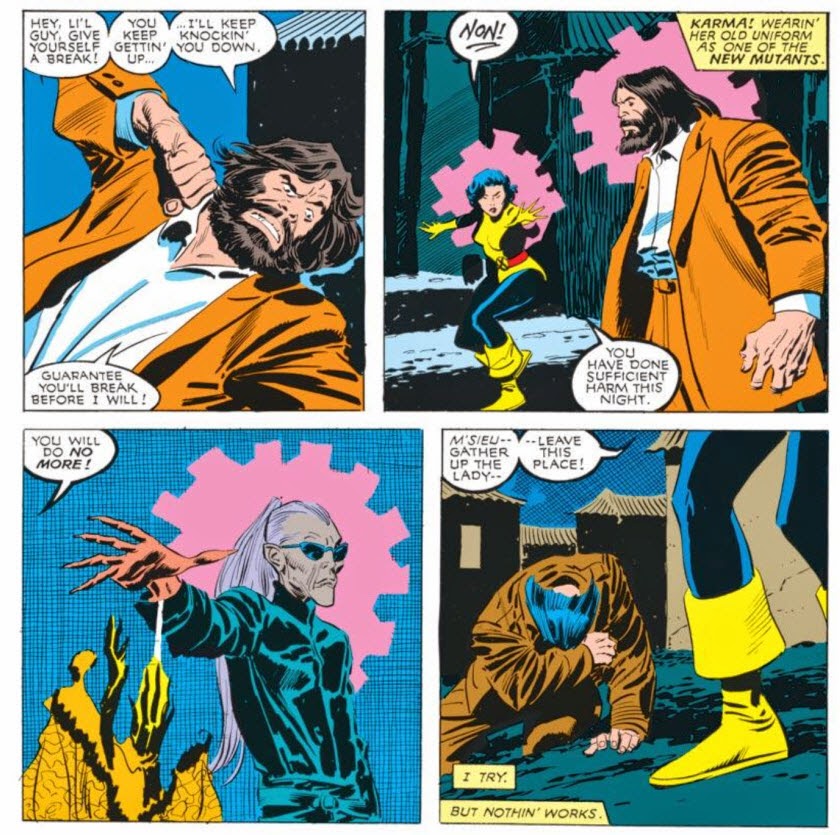 Jessica Drew and Lindsay McCabe remain in Madripoor, and though they are planning to return to San Fransisco soon, they're both drawn into the events of the story, and we get to see Jessica use her remaining Spider-Woman powers a bit.

The back cover is drawn by Barry Windsor-Smith.

The Chronology Corner
This issue takes place after "Inferno". Wolverine is already in Madripoor as the story begins, suggesting he's just hanging out there now when not dealing with X-Men business.

A Work in Progress
Roughhouse says he hasn't seen someone as cute as Jessica and Lindsay in a "troll's age", another reference, in addition to his somewhat stilted-dialogue and general abilities, to his Asgardian nature. 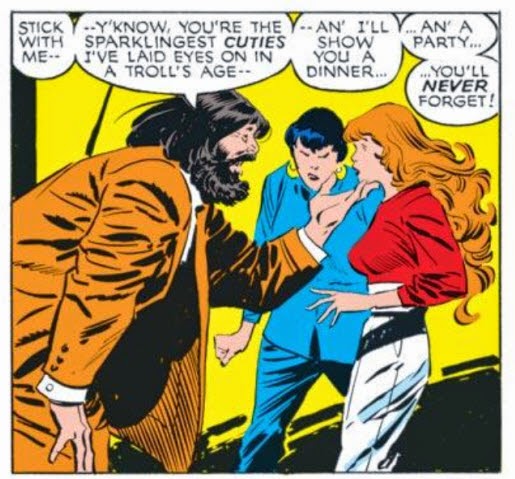 It's confirmed, via narrative caption, of all things, that Wolverine did indeed purchase a half interest in the Princess bar. 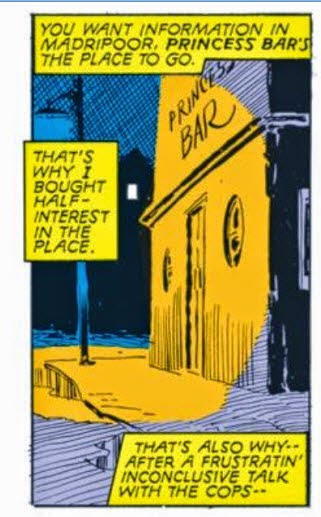 Trying to convince Jessica and Lindsay to help her, Wolverine emphasizes that for as much as Tyger Tiger is Madripoor's new crime lord, she doesn't traffic in drugs or slaves, and thus that letting her fall to Coy would be much worse. 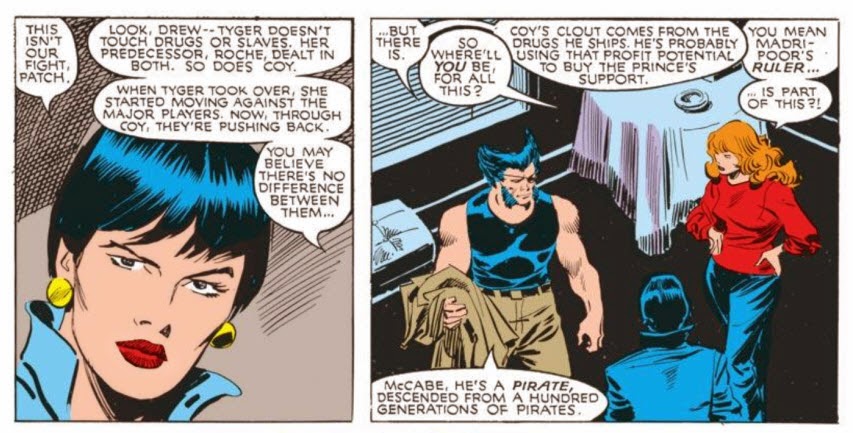 The Reference Section
Patch asks Tai if he's going to round up the usual suspects, a reference to Casablanca. 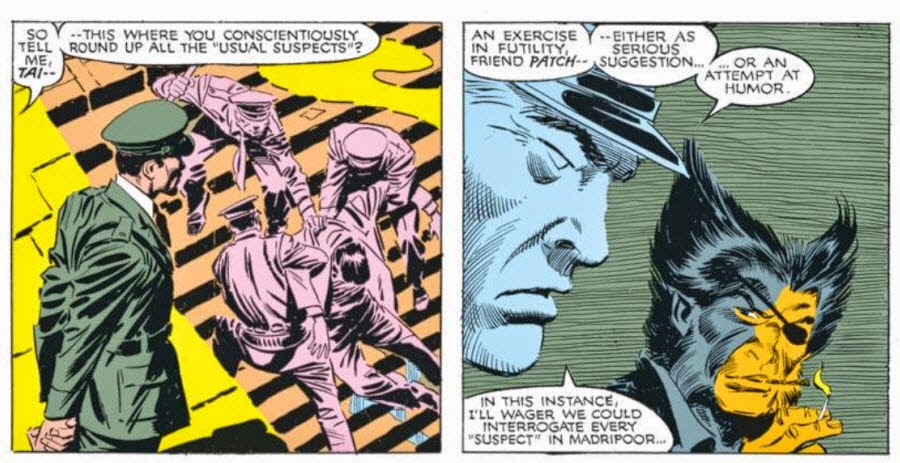 The Best There Is At What He Does
It's established this issue that Wolverine speaks Vietnamese, though it's a little rusty.

Teebore's Take
After an introductory three issue arc that was a pleasant enough bit of adventure storytelling but little else, this issue kicks off a story arc that start to do something this series desperately needs at this point: create a distinct setting and cast of characters for the series, a unique identity to differentiate it from Marvel Comics Presents serials or solo Wolverine stories in X-Men. We've already gotten the physical setting of Madripoor, the somewhat-ludicrous Patch identity and the narrative complication that prevents Wolverine from using his claws too often, but in this issue, Madripoor gets fleshed out as a specific place, and we see Wolverine interacting with it as such, meeting with the chief of police, grappling with its politics and the machinations of rival crime lords.

In Chief Tai, Archie Corrigan, Jessica Drew and Lindsay McCabe (the later two still hanging around after last issue), we get a potential supporting cast for Wolverine. In Roughhouse and Bloodscream, we get new villains tied directly to this series, and with the first appearance of Tyger Tiger in the series and the gang war between her and General Coy, we get our first ongoing storyline specific to the setting of the series. Bottom line, this is the first issue of the series to feel like an issue of an ongoing series, and just not a showcase for a Wolverine solo adventure that could have appeared in multiple places, and that's a good thing.