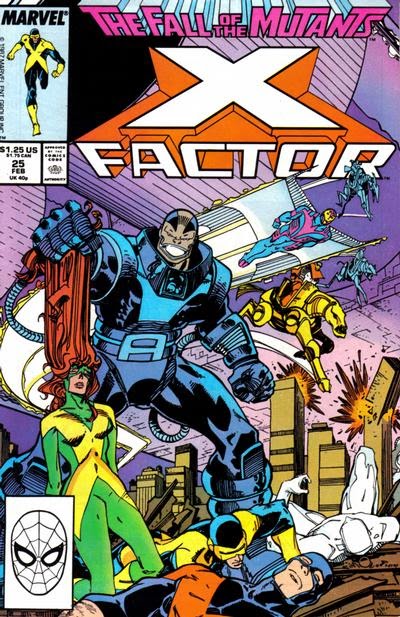 In a Nutshell
X-Factor battles Apocalypse.

Plot
Apocalypse and the captive X-Factor watch as the Horsemen attack Manhattan. As Apocalypse gloats, Beast is able to deactivate Iceman's inhibitor belt, enabling him to ice up and free his teammates. They attack Apocalypse, damaging a transformer that causes the ship to suck light and energy from the city, plunging it into darkness. After Apocalypse ejects Marvel Girl and Cyclops from the ship, they decide to try and stop the Horsemen. As Pestilence heads into the subway tunnels, Marvel Girl and Cyclops split up to face Famine and War. Famine seemingly defeats Marvel Girl, at which point Apocalypse teleports her to Kansas, to smash American's bread basket. Meanwhile, Cyclops beats War by targeting his mount, and reunites with Marvel Girl. Aboard the ship, Beast accidentally destroys the ship's cloaking mechanism and stabilizers, causing it to appear in the sky above the city and then to smash into buildings, causing panic in the streets. 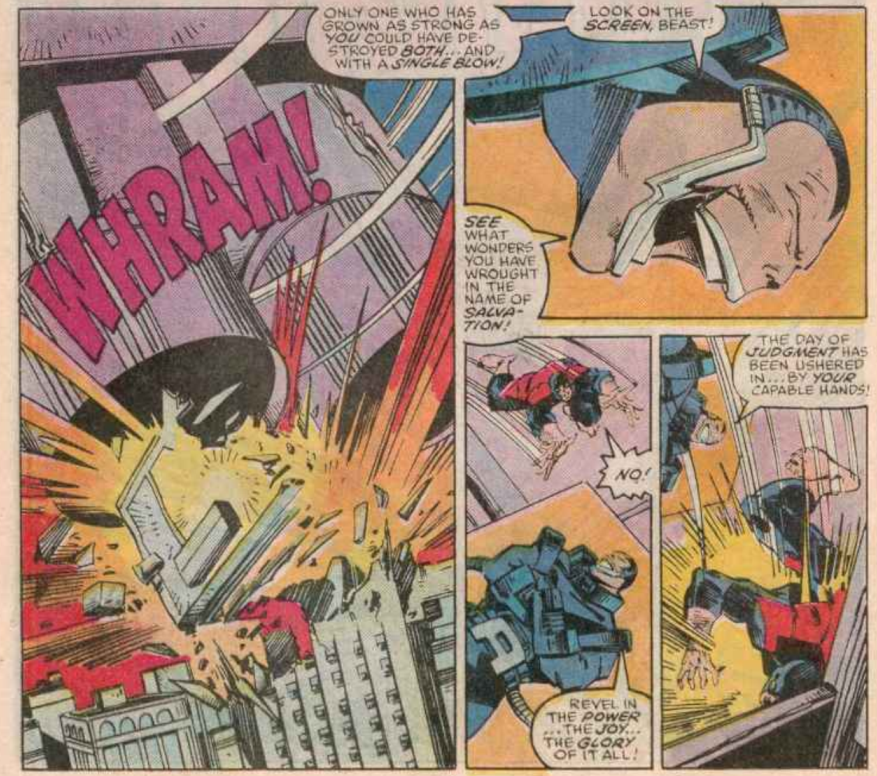 When the ship smashes into the Empire State Building, Marvel Girl grabs the broken antenna telekinetically but struggles to keep it aloft. Suddenly, Power Pack arrives, followed by Pestilence. As Power Pack battles Pestilence, Death flies through the antenna, smashing it in half. Just then, Apocalypse teleports Death back to the ship, while Pestilence is killed by the falling debris. As Cyclops and Marvel Girl instruct Power Pack to continue helping people, they commander Pestilence's mount to return to the ship. They arrive as Iceman and Beast are battling War and Death. As War is easily overpowered, Iceman has an idea. Death circles around and flies into Iceman, slicing him in half with his wings, seemingly killing him.

The shock of this action brings Death to his senses, and he realizes he regained his wings at the cost of his soul. Turning on Apocalypse, he's quickly joined by X-Factor, including Iceman, who faked his death using an ice dummy. As X-Factor once more insists they won't join Apocalypse, he abandons the ship, taking War and Caliban with him and offering the vessel to X-Factor in return. As the ship nears the harbor, X-Factor tries to get it under control, and an explosion somewhere inside stops its movement. It hits the water, then falls over, crushing the X-Factor complex. They emerge from the ship as reporters gather, telling them that an evil mutant named Apocalypse caused the damage to the city whom they tried to stop. Cyclops then reveals the truth behind X-Factor, and says that the good on both sides, human and mutant, must work together against those who would possess Earth for their kind alone, or else the planet will become a graveyard.

Firsts and Other Notables
Angel is snapped free of Apocalypse's control this issue, brought to his senses after seemingly killing Iceman, though he will continue to struggle with the changes wrought on him by Apocalypse for years to come. And though Angel appears with X-Factor at the end of the issue, he won't rejoin the team until "Inferno", maintaining a presence in the book in the intervening issues but mostly keeping to himself. 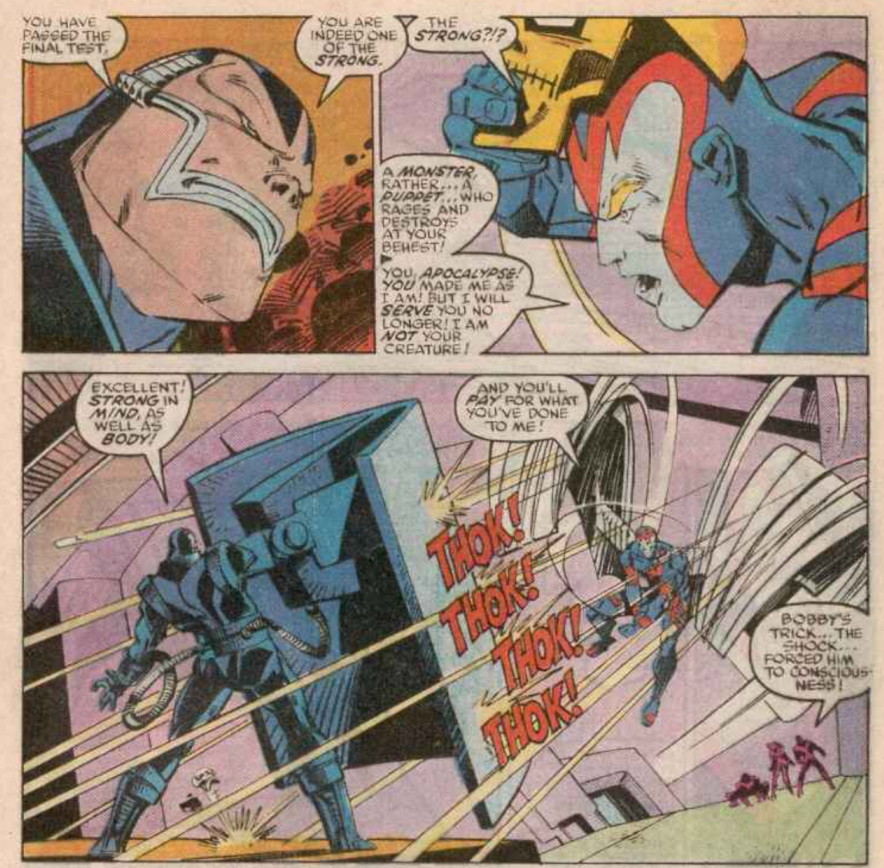 Apocalypse gifts his space ship headquarters to X-Factor this issue, fleeing it along with War and Caliban, and X-Factor manages to down the ship such that it destroys their original riverside headquarters. Ship, as it will come to be called, will serve as X-Factor's base of operations from this point forward for the remainder of the original X-Men's tenure in the book. 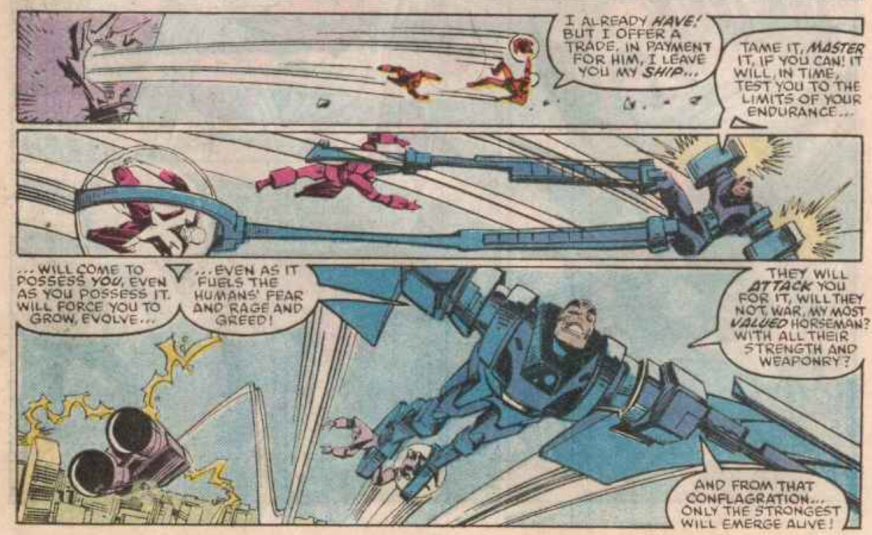 In the wake of their battle with Apocalypse, X-Factor reveals the truth behind their mutant hunter ruse to the public, officially ending that phase of the title. 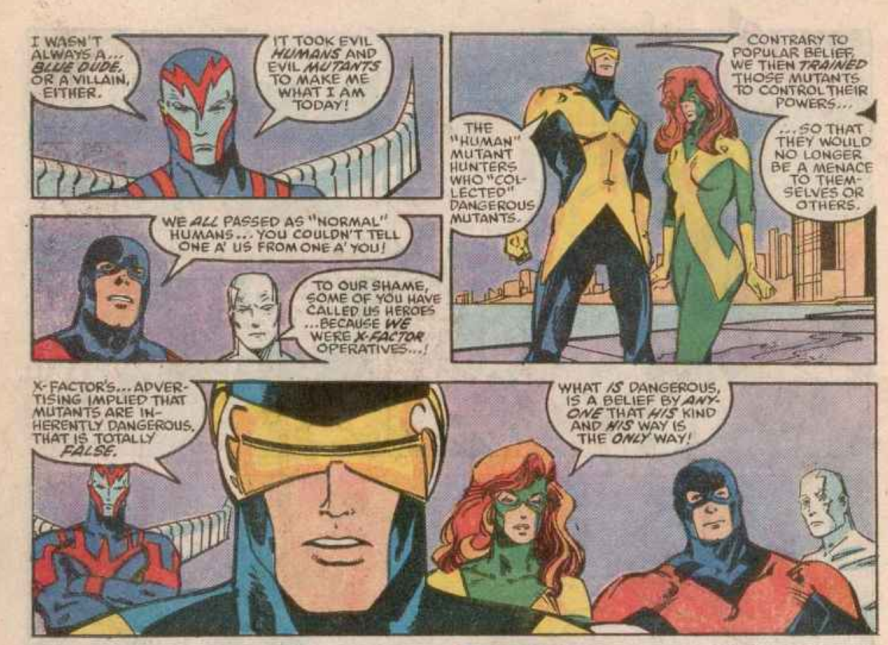 Of all the "Fall of the Mutants" issues, this is the one which crosses over the most with the non X-book titles. Famine disappears in the course of the issue to attack America's breadbasket, which will be seen in Captain America #339. 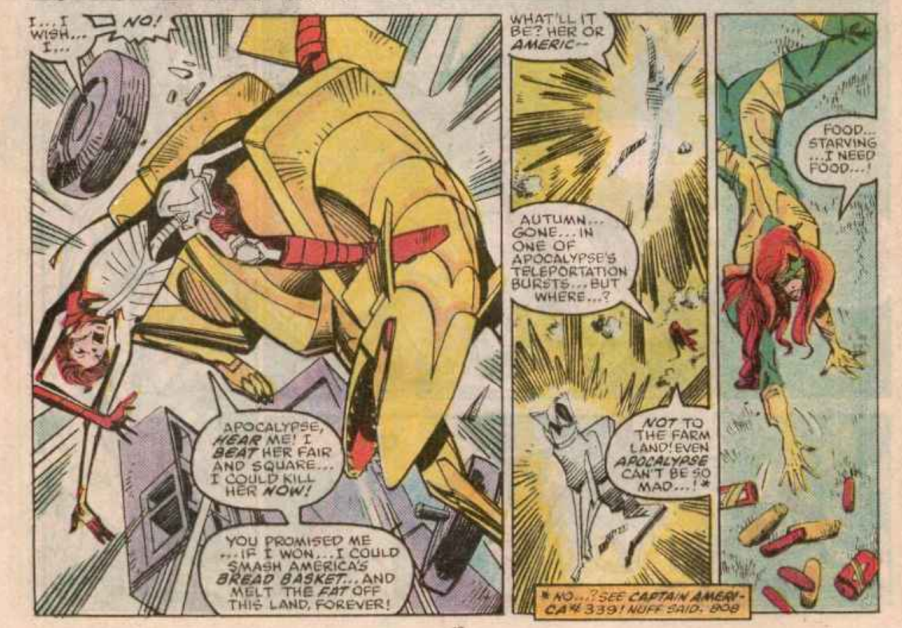 In deciding to pursue the Horsemen rather than help people affected by the damage, Cyclops notes that the city has other champions, which will be seen in the Daredevil & Power Pack tie-in issues. Power Pack #35 weaves rather tightly in and around this issue, showing Pestilence's battle with the kids, more fallout from the damaged Empire State building, and the explosion which disable's Apocalypse's ship. 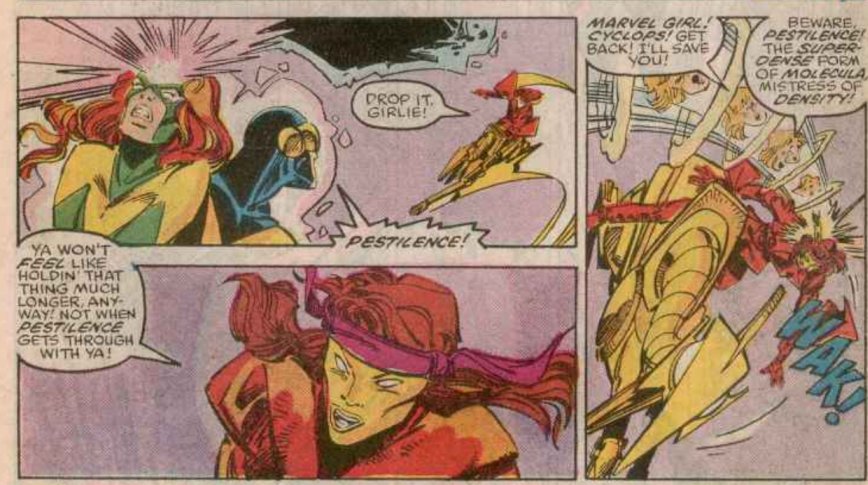 Apocalypse's ship causes a massive amount of damage to New York in this issue (including a blackout), the fallout of which will be addressed in future issues while also serving as the backdrop to some of the tie-ins.

Pestilence dies this issue. As far as I know, she's remained dead.

A Work in Progress
It's noted that as far as X-Factor can tell, Angel hasn't killed anyone as Death. 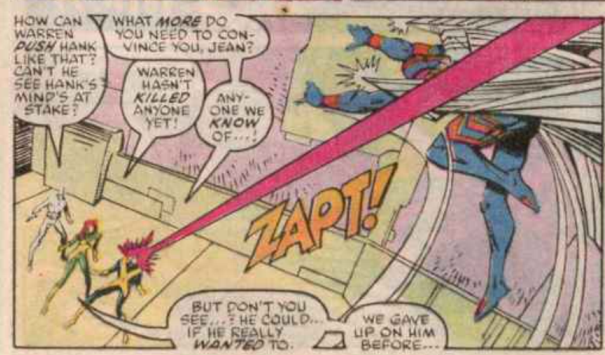 It's also confirmed that while he considered it, Warren didn't try to kill himself in issue #15, and that his plane was rigged to explode by Hodge.

I Love the 80s
Ronald Reagan is shown signing the Mutant Registration Act into law.

Human/Mutant Relations
In the wake of the damage being caused by Apocalypse, Cyclops wonders if humans aren't right to blame mutants, with Marvel Girl countering that if they're going to blame anyone, they should blame Apocalypse, not mutants in general.

When X-Factor emerges from the downed ship, someone in the crowd recognizes that they're mutants and shouts to "string 'em up!". 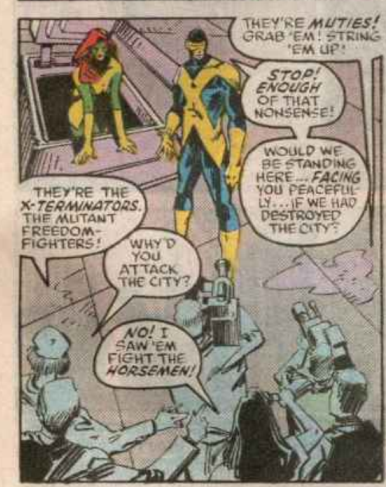 Angel explains that it took both evil humans and evil mutants to turn him into what he's becomes.

Deeds and Junk
In a pretty spectacular eff you to Iceman, Angel repeats his new mantra back at him just before apparently killing him. Louise Simonson on Angel's transformation
"We [she and Walt] were so bad! One of the goals we had - aside from trying to meld the mutant universes again - was to try to increase the powers of some of the X-characters. Rather than Angel being able to fly at sixty miles per hour or whatever he could do, we wanted to give him powers that were more in kepping with the inflated power level of other characters...[Apocalypse] grabbed Angel, mutated him, gave him razor sharp wings, increaeed his flying speed and when he flicked his new wings, these blade-like feathers would fly off and act like knives or razoe blades. We turned his skin blue too and I think we shaved his head - a very visual symbol fro the change of character! Ffrom being this happy-go-lucky rich guy, who's always had everything handed to him, he becomes an angry, anguished character. I have to say that there are probably readers who have never forgiven us for that, but, conversely, there are others who think that Archangel is their favourite character. This is what it's like in comic books."

Teebore's Take
As with New Mutants double sized middle chapter, this issue effectively wraps up the immediate conflict of X-Factor's contribution to "Fall of the Mutants": Apocalypse and his Horsemen are defeated, Angel has been freed of Apocalypse's control (though not his influence) and a new status quo beckons for the main characters. In terms of the action scenes, Simonson and Simonson keep things from being too repetitive by splitting up both teams (whereas last issue featured the more traditional team-on-team action), even as they continue to develop Apocalypse as a character.

One of the great things about this issue is the way Apocalypse straight up doesn't care whether he wins or loses in the traditional sense. He's accepted that X-Factor are "strong", by his standards, so it's not a matter of defeating them so much as it is convincing them his worldview is correct. In the end, he leaves not so much out of defeat, but because he realizes he can't strong arm them into joining him, essentially gifting X-Factor his ship because he believes, in the end, it will help him prove his point. It's an approach that helps set Apocalypse apart from other X-baddies, and something that eventually gets lost when the character embraces the more traditional "you're weak because you disagree with me" routine.

Meanwhile, this issue represents the final step in Simonson's rehabilitation of the title. Thus far, she's established that the original mutant hunter premise of the book was the brainchild of a militant anti-mutant bigot with the goal of destabilizing human/mutant relations, while the main characters, having learned this, have both quit and been fired from the organization. In this issue, she formally ends this iteration of the title, first by the symbolic act of their new headquarters literally crushing their old one, then by having the characters publicly expose the ruse, outing the X-Factor mutant hunters as the mutant X-Terminators. It took just over two years, but the characters are finally free of their book's ill-advised premise.