In a Nutshell
The X-Men die in order to defeat the Adversary.

Plot
Inside the lobby of Eagle Plaza, the X-Men find themselves beset by both demons and Viet Cong soldiers. As Neal Conan records and broadcasts their actions, Madelyne comes across an image from the past: a young Forge casting a spell, powered by the souls of the dead soldiers around him, which calls forth demons to destroy the Viet Cong. High above in Roma's Starlight Citadel, the Adversary gloats to the captive Roma, Forge and Storm. Psylocke senses the real Forge in the citadel and Rogue tries to fly to it, but is rebuffed by fierce winds. However, trusting to his hollow bones and luck, the X-Men use Longshot as a kite, and he manages to sail over the winds, dragging the rest of the X-Men and Neal behind him. Reaching the citadel, Rogue absorbs a measure of the Adversary's power and sorcerous abilities. Just then, Colossus, who as Roma's ringer was not accounted for by the Adversary, flies into the Adversary, his organic steel body shredding the Adversary's outer form, severely weakening him. Rogue then opens a portal, and the X-Men combine their powers to force the Adversary through it. 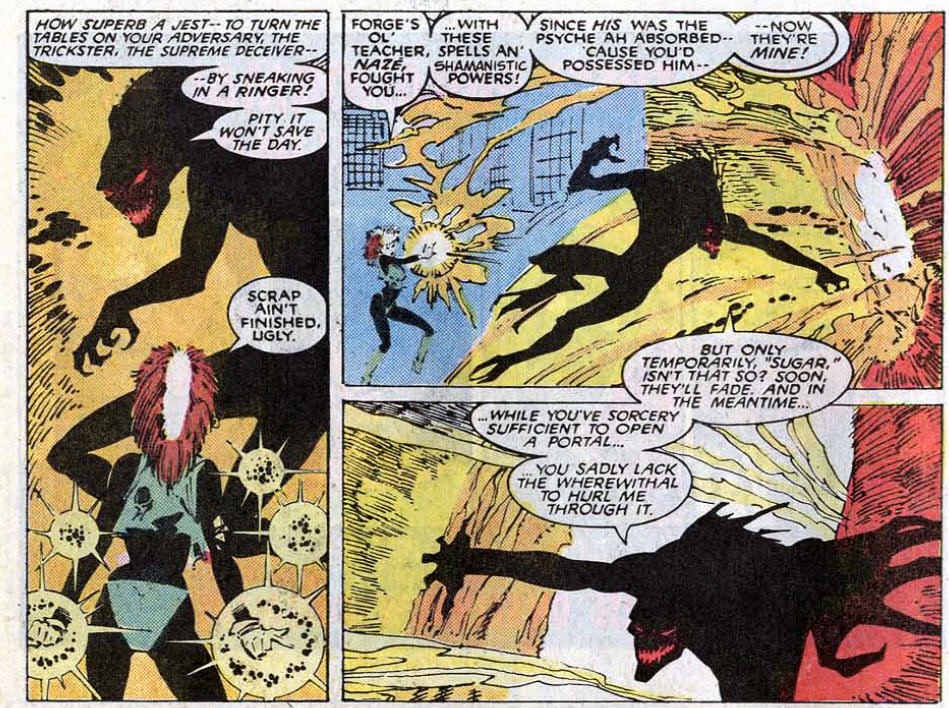 However, Forge reveals that in order to seal the gateway, he must recreate the spell that opened it in the first place, the spell he cast in Vietnam, and for that he needs nine souls, freely given. The X-Men and Maddie volunteer. As Storm says goodbye to Forge, Maddie records a message for Scott, telling him to find their son. Forge then casts his spell, killing the X-Men and locking away the Adversary. On Muir Isle, Kitty watches the footage from Dallas as Nightcrawler awakens from his coma. In Dallas, Forge and Neal emerge from the ruins of Eagle Plaza, and Mystique declares Forge a murderer. However, in her citadel, Roma resurrects the X-Men, and as reward for their sacrifice, offers to send them to any place, any time. However, with the world believing them to be dead, the X-Men decide to maintain that ruse, to better protect their loved ones and give them greater freedom to act, just as they once had planned. Roma salutes them, saying that as great of heroes as they were, they have now become legends.

Firsts and Other Notables
The X-Men all die in this issue, fulfilling Destiny's prophecy as they willingly give their lives so that Forge can cast a spell to lock away the Adversary. In a literal deus ex machina, they are then resurrected by Roma shortly thereafter, as thanks for their sacrifice, though Roma is clear that they did technically die (a distinction that Wolverine hilariously could care less about). 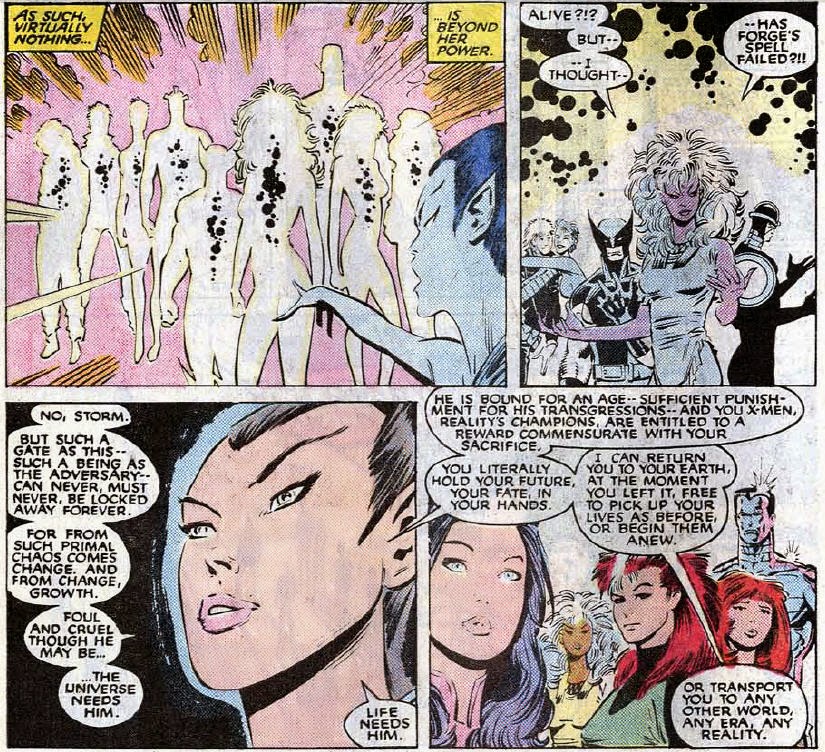 "Plan Omega", Storm's somewhat dubious idea of faking the X-Men's deaths in order to better protect their loved ones and give them more freedom to strike at their enemies (last referenced in issue #219, though that codename was only previously used in New Mutants #51), is referenced as the X-Men decide to keep their resurrection a secret and let the world continue to believe they're dead, essentially having carried out the plan unintentionally. 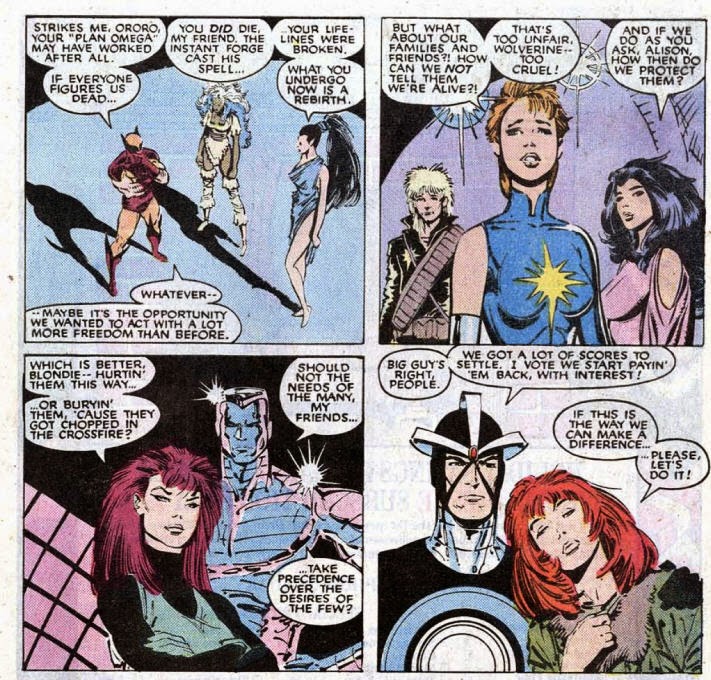 A future issue of Excalibur will reveal that Roma wanted the world to believe the X-Men had died so that the members of Excalibur would come together to form that team.

The Adversary is defeated in this issue and seemingly locked away, though Roma notes that he cannot ever be defeated entirely as the universe needs some element of chaos to survive. The Adversary will next pop up during Howard Mackie's less-than-stellar X-Factor run in the 90s.

Forge's big secret, hinted at in previous issues, is revealed: in Vietnam, after the members of his squad were killed by the Viet Cong, he used his magical abilities to open a portal and summon demons to kill the Viet Cong, after which he called in an air strike to destroy the demons and the evidence of his actions. It was this act that led Forge to give up his magical heritage, and it was through this portal that the Adversary came. Bbecause Forge used the souls of nine dead soldiers to open the portal, he is required to use nine more souls to seal it again completely.

Before Forge begins his spell, Maddie speaks directly to Scott, telling him she loves him and imploring him to find his son. Footage of this message will feature heavily in future issues of X-Factor, and serves as the method by which Cyclops learns his son is still alive.

Kitty Pryde is seen watching the footage of the X-Men in Dallas from Muir Island, and Nightcrawler awakens from the coma he's been in since "Mutant Massacre" just after the X-Men die. We'll see both of them next in Excalibur Special Edition #1 (though Kitty technically appears in New Mutants #65 between this issue and that one). 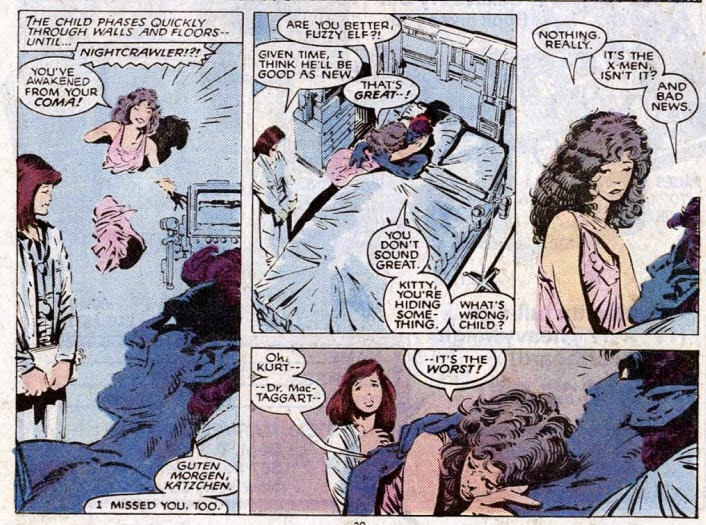 A Work in Progress
Neal, introducing the X-Men, says that Havok is aptly named for his ability to fire "focused, coherent energy plasma". I'm not sure that follows... 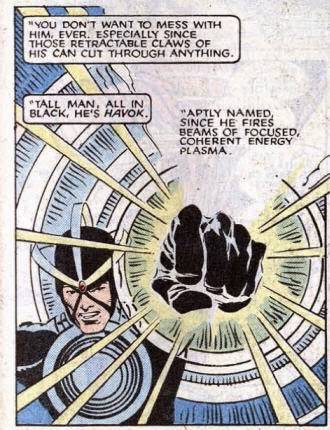 Colossus is forced to transform back into flesh and blood in order the X-Men to get into Roma's citadel, an act which takes considerable effort.

Both Longshot's knives and Colossus cause significant harm to the Adversary, as they care comprised of "cold iron". 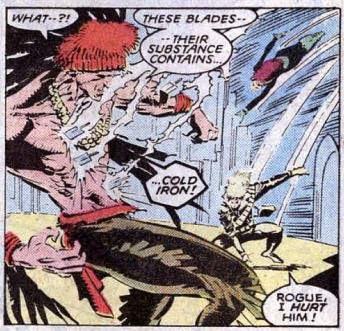 Colossus' attack causes the Adversary to shed his Naze skin, appearing in his demon form for the first time. 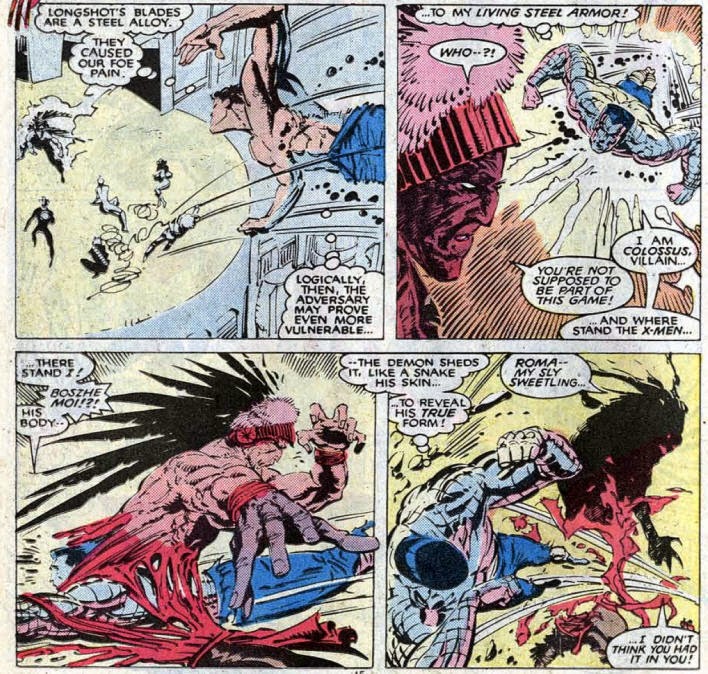 Forge gathers the X-Men's souls into a star and hurls it at the Adversary; a similar star design will become a logo of sorts for the X-Men during the upcoming Outback Era. 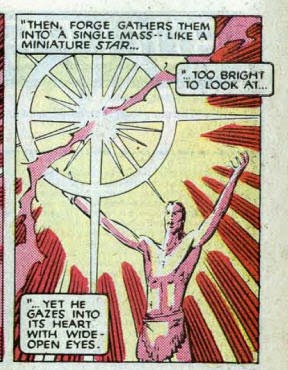 When Roma resurrects the X-Men, Dazzler thankfully returns without Destiny's mask stuck to her face by a magic knife.

Claremontisms
Longshot and his hollow bones are used as a kite to get the X-Men past the hurricane force winds surrounding Roma's citadel. 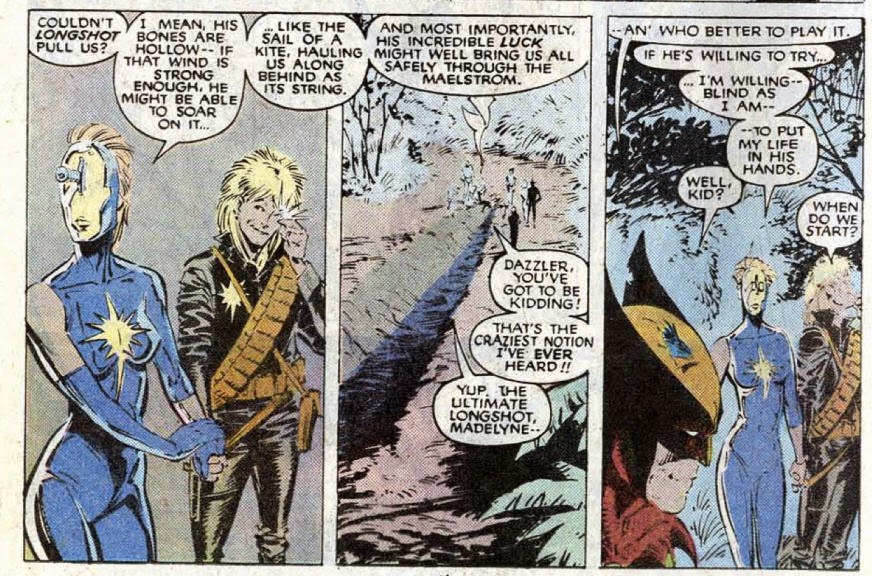 Human/Mutant Relations
With Neal on hand and recording, the entire world is able to see the X-Men's fight against the Adversary and their ultimate sacrifice. 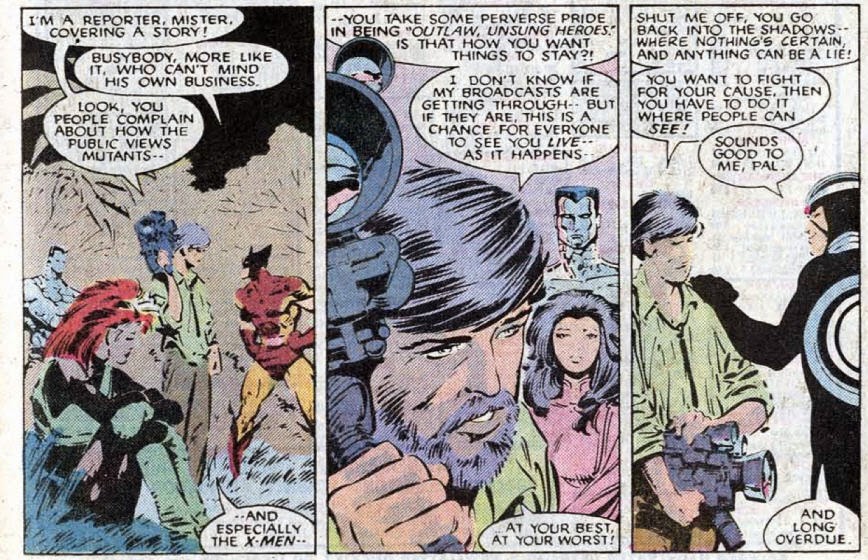 Madelyne, being interviewed by Neal, asks where it says you need to be a mutant to believe in the X-Men's goal, then echoes Martin Luther King Jr. For Sale
"Mutant Massacre" had full page ads for Jim Shooter's big "New Universe" line of comics. A year later, Shooter is gone and the line was limping along, with this issue running a half page ad for a New Universe storyline that hoped to bump up sales. It didn't, and the line was axed shortly thereafter. 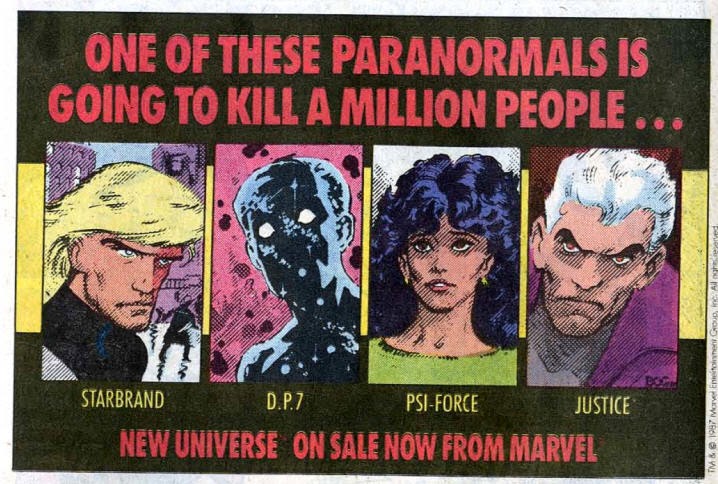 Teebore's Take
As with the double-sized second chapters of "Fall of the Mutants", the third parts are similarly themed across the three titles: each is responsible for establishing a new direction for its respective series moving forward. Claremont has, in the past, depicted the X-Men as sci-fi superheroes, as agents of political change, and as revolutionary outlaws fighting against political institutions that would destroy them. With this issue, in the wake of the X-Men's "deaths" and the unintentional institution of Storm's "Plan Omega", he begins their newest phase: the X-Men as legends.

It's an idea that has been somewhat explored before (the X-Men have never been as public a group of superheroes as the Avengers and Fantastic Four, often existing in the eyes of the public as urban legends), but Claremont will take it farther, and with the onset of the book's "Outback Era", he will move the team further than ever away from the traditional superhero model, utilizing new villains and exploring, shaking up and eventually deconstructing the very idea of a team book. It leads to some genuinely good, crazy, ambitious, awful and intriguing stories, the stage for which is set by this issue.

But beyond the look forward, this issue is a rousing conclusion to X-Men's portion of "Fall of the Mutants". After the onslaught of cool moments, big and small, and the relative chaos of rent timelines and team-ups last issue, the X-Men are back in the spotlight for this one, but the cool moments keep coming, from Longshot the human kite to the payoff of Roma setting up Colossus as a ringer to the teamwork used to keep the Adversary at bay before Forge casts his spell to the heartfelt goodbye message Maddie records for Cyclops. The end result is an issue that is both fun and epic, as concerned with character as with action. It's an appropriate ending to a storyline that not only paid off a subplot that had been lingering some forty odd issues, but also put to an end the general miasma of the book following "Mutant Massacre" while it set up the next chapter in the story of the X-Men.

Next Issue
Tomorrow, the New Mutants deal with the fallout of Doug's death in New Mutants #61 followed on Friday by a new start for X-Factor in X-Factor #26. Next week, we begin the "Fall of the Mutants" wrap-up with Captain America #339 & Daredevil #252.
Newer Post Older Post Home
Posted by Austin Gorton at 12:00 PM