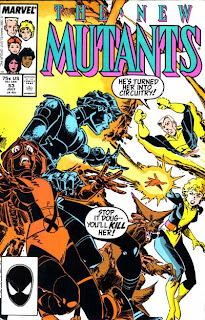 In a Nutshell
The New Mutants attend a party at the Hellfire Club.

Plot
At the X-Mansion, Doug wakes up from a nightmare in which he became infected by the transmode virus and attacked the New Mutants. The next evening, in Manhattan, a man named Van Ostamgen receives a priceless statute he believes will gain him admittance to the Hellfire Club. At the same time, the New Mutants and Magneto arrive in Central Park, courtesy of Illyana, and heads towards the Hellfire Club, which is holding a gala. Though they are all somewhat apprehensive of making nice with the Hellfire Club and the Hellions, despite Magneto's new alliance, Doug is especially agitated. As they enter the gala, Amara bristles at the presence of Selene, while Doug angrily refuses to dance with Tarot. When Rahne reunites with Catseye, the pair transform into their animal forms and run off. Alerted to the transformation by the activation of her psychic link with Rahne, Dani and John Proudstar attempt to track down their errant teammates. 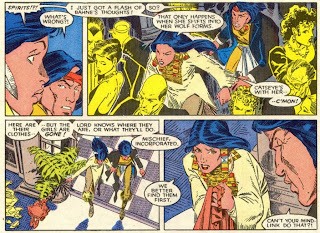 Just then, Van Ostamgen arrives and presents Selene with the statute, but Amara tells him he is mistaken, saying the statute is of her ancestor, and still in her family's possession, meaning he has a fake. Selene agrees, breaking the statute but claiming she and Amara's ancestor are one and the same. Meanwhile, Roulette brings Doug to a poker game. After winning big, he grabs a bottle of champagne and runs off with Roulette. Later, when Rahne and Catseye stumble across a drunk Doug in a room full of women, Rahne's shock at the sight alerts Dani, and before long, both teams are gathered in the room. The tensions simmering between the two groups reaches a boiling point when a drunken Doug, believing Roulette used her power to help him win, slaps her. To defuse the tension and burn off some energy, Sam suggests a contest: each team will try to discover who swindled Van Ostamgen. Agreeing to keep the contest a secret from their respective headmasters, Proudstar declares it settled: New Mutants vs. Hellions, may the best team win.

Firsts and Other Notables
Sunspot and Warlock are absent from this issue, having left the team in Fallen Angels #1, which occurs prior to this issue and we'll look at in two weeks.

This issue suggests a family connection between Selene and Amara: when Amara notes that a statue said to be a representation of Selene is actually one of her grandmother many times removed, Selene says the statue is both a representation of her and Amara's grandmother. This connection between Selene and Amara is, I believe, largely forgotten in the midst of first Claremont's departure from the title and then Amara's departure shortly thereafter, and remains mostly unresolved (aside from some lip service paid to it during "Necrosha"). 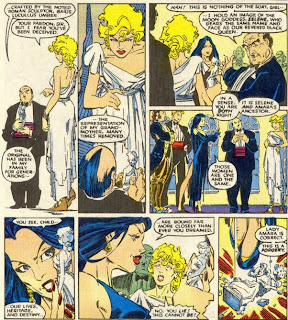 As will be revealed next issue, the cab driver and passenger who sold Van Ostamgen the Selene statue are Silver Samurai and Viper. 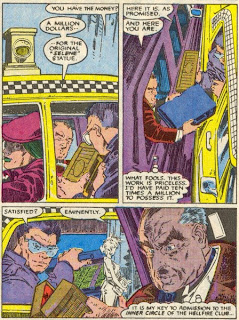 Rick Leonardi continues to fill in on pencils, inked this issue by Terry Austin. The result is quite pleasant.

A Work in Progress
This issue opens with an extended dream sequence in which Doug realizes he's been infected by the transmode virus and, in turn, begins infecting his teammates before being forced to battle Warlock just as Warlock had to fight the Magus. However, after Doug wakes up and realizes it was all a dream, it's suggested that he has, in fact, become infected by the virus. 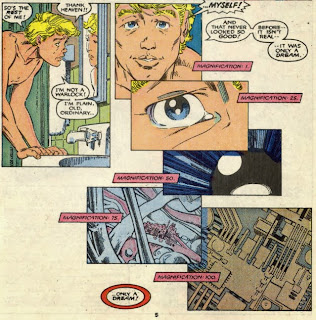 Amara and Selene encounter one another for the first time since X-Men #191, and the meeting is understandably frosty.

Sam drinks champagne at the Hellfire Club party. While it's possible Sam is, by this point (barely) eighteen, I believe by 1987 the legal drinking age was 21, so this is presumably an indication of the Hellfire Club and/or Magneto's looser morals.

Dani and John Proudstar bond over the burdens of leadership, while Rahne and Catseye rekindle their friendship. 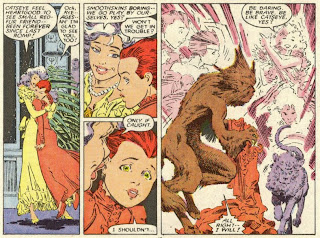 Doug sits in on a poker game at the Hellfire Club party, and in a nice use of his power, reads body language to help come out the big winner. Then he gets drunk. 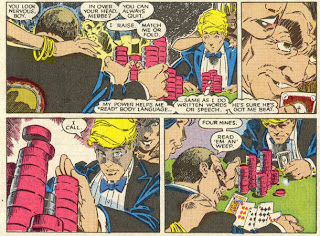 After realizing Roulette was with him the whole time he was playing, Doug later drunkenly accuses her of rigging the game in his favor, then slaps her, something which makes neither team very happy.

Claremontisms
Dani refers to herself as the New Mutants' "war-chief", and says she won't be "forsworn". Yeesh. 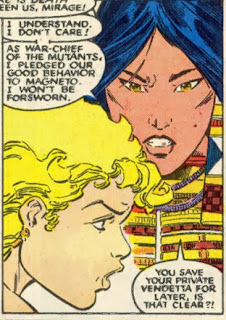 Young Love
Tarot, who it has been established has a crush on one of the New Mutants, asks Doug to dance, but he angrily brushes her off, assuming it's all part of some Hellion plan to get their hooks into him, causing her to run off crying (it's not a good issue for Doug in terms of not being a jerk-ass). 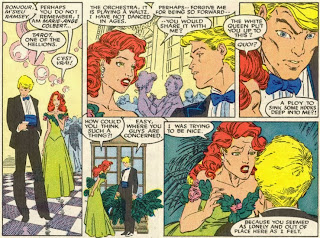 Later, however, Doug hooks up with Roulette (and some other women) and you could interpret it as Doug having slept with Roulette (or at least fooling around with her).

Rahne's shock when she comes across a drunk Doug in a bedroom surrounded by woman is, perhaps, the first hint at Rahne having romantic feelings for Doug, something that incoming writer Louise Simonson will explore.

They're Students, Not Superheroes
The New Mutants' excursion to the Hellfire Club party is their first outing in weeks since being grounded, according to Magneto.

Teebore's Take
This issue marks the beginning of Claremont's final regular New Mutants story, a two-part affair that pits the New Mutants against the Hellions once again. Of course, at the time, Claremont was expecting to merely take a few months off from the title before returning, so the compulsion to turn in any kind of final, definitive statement on the series or the characters likely wasn't there (nor was, as issue #54 will show, any compulsion to wrap up any lingering plot threads). Instead, Claremont's final story uses a recent development (the alliance between the X-Men and the Hellfire Club) as a vehicle for a story featuring the two strongest elements of the series thus far: characterization, and the Hellions.

Character moments abound in this issue, triggered by putting the New Mutants in close proximity to the Hellions, only this time, any formal rivalry between the two teams has been, in theory, eradicated by the new alliance. In practice, of course, this is hardly the case, but this issue presents the idea at the heart of the Hellions - that of a rival school to the New Mutants, only with superpowers as the tools of the rivalry rather than sports or academics - in its most pure form. It ends with the two teams set against one another again, but in a contest that isn't that far removed from the hijinks in which two real world schools might entangle themselves. So while Claremont's final story lacks any grand pronouncements or shocking moments, it does speak to the idea at the heart of the series: that of a group of teenaged students who just happen to have superpowers, where their interactions with each other and their "villains" are more important that sustained superhero slugfests.

Next Issue
Tomorrow, X-Factor faces off against a new foe in X-Factor #17, and next week, Warlock battles the Impossible Man in New Mutants Annual #3.
Newer Post Older Post Home
Posted by Austin Gorton at 11:00 AM