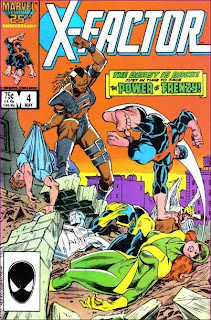 In a Nutshell
Frenzy makes her first appearance.

Plot
X-Factor, in their costumed guises, confront Tower at LaGuardia Airport, having noticed him watching the X-Factor building. He ultimately escapes and meets up with Frenzy, who admonishes him for failing to liberate the boy from X-Factor and tells him their master has sent her to finish the job. Back at X-Factor headquarters, Rusty is training with Jean, but gets distracted when Scott and Artie enter the room. After being admonished by Jean, and angry about being forced to live with the odd-looking Artie, he rushes off. Later, X-Factor investigates a potential mutant at a boarding school, but it turns out the boy in question was just faking being a mutant. However, the abject terror he expresses at the idea of being taken away by X-Factor leaves Jean wondering if their mutant hunter ruse is doing more harm than good.

Back at X-Factor headquarters, Rusty packs his bag to leave and when Artie tries to stop him, calls him a freak before running away. Out on the streets, Rusty encounters Frenzy, who applauds him on escaping from X-Factor, but when he refuses to return with her to her master, she attacks him. When X-Factor returns to their headquarters, Artie, who has established a mindlink with Rusty, alerts them to Rusty's predicament. With Artie's help, they track down Rusty and fight off Frenzy. Jean apologizes to Rusty for being so hard on him, while Scott imparts the importance of learning to control his powers, and Rusty apologizes to Artie and thanks him for saving his life. Elsewhere, Frenzy is ordered to report to the Master before withdrawal begins, and she swears that someday she'll be free of the sway of the "source".

Firsts and Other Notables
This is the first appearance of Frenzy (who will later be given the real name of Joanna Cargill), a super-strong, near-invulnerable mutant working with Tower. Of all of the handful of new villains Layton creates during his short run on this book, Frenzy is the one who has, for whatever reason, managed to establish an extended place for herself within the X-universe, eventually showing up as a member of Magneto's Acolytes before joining an expanded Marauders lineup and ultimately joining the X-Men, even falling in love with Cyclops and co-starring for a time in X-Men: Legacy. 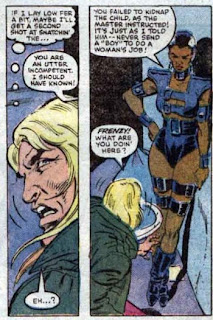 Time Shadow, another associate of Frenzy and Tower's, is mentioned and heard, but won't be seen for the first time until next issue.

Frenzy, Tower and Time Shadow all answer to someone they only refer to as "the Master"; he will be revealed as Apocalypse next issue, Bob Layton's last, though Layton's original plan, before leaving the book, was for their master to be the Owl, an old Daredevil villain. They are all hooked on something called the "source", and are fearful of withdrawal if they don't get regular doses. 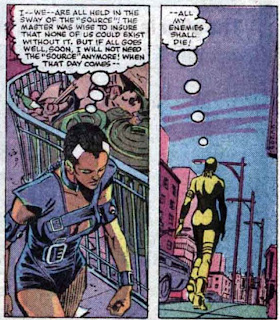 Keith Pollard, who penciled the issue of New Mutants prior to Jackson Guice taking over that title, fills-in for Guice on this issue, though with Rubinstein on hand, the difference is hardly noticeable.

A Work in Progress
During a training session with Rusty, Jean is uncharacteristically bitchy and shrill. This is not a setup for a future plot, but rather just bad writing. 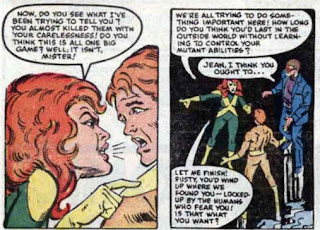 Candy Southern (remember her? Warren barely does) calls Warren, saying some non-X-Factor business needs his attention, but he blows her off, telling her she can handle it.

Certain panels in this issue suggest that Frenzy is larger than a normal person, but the perspective isn't always consistent, and later stories depict her as being of relatively normal size.

We're down to Maneuver Three! 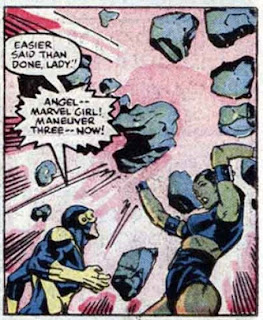 I Love the 80s
Before encountering Frenzy, Rusty is almost mugged (because this is New York in the 80s), and his mugger is rocking a pretty interesting ensemble. 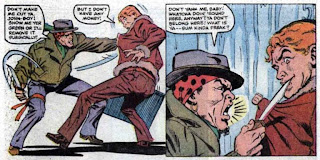 Frenzy's overall look also strikes me as being very 80s.

Scott Summers, Husband of the Year
While working with Scott to hone his powers, Artie projects an image of Madelyne from Scott's mind, prompting him to breakdown and almost get into everything with Artie, of all people. 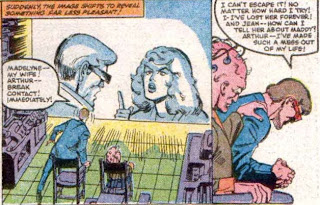 Young Love
Meanwhile, the old Scott/Jean/Warren love triangle rears its ugly head, as Jean comes to Warren for advice about Scott, at which point Warren instead tries to tell Jean about his feelings for her, only to be interrupted by the call from Candy (his current, and longtime, girlfriend).

Human/Mutant Relations
In the wake of X-Factor's battle with Tower at the airport while in their costumed identities, the crowd cries out that someone should call X-Factor on them. 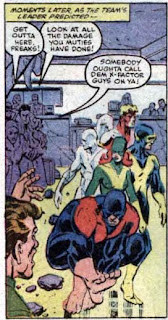 Later, while investigating the young student thought to be a mutant, Cyclops quickly realizes the kid is not a mutant, but thinks the only way to get the truth is to scare it out of him, for some reason. 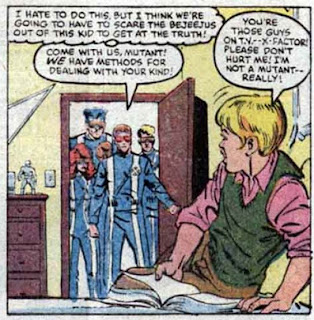 The encounter with said boy leaves Jean thinking that maybe the whole mutant hunter thing is doing more harm than good, a thought which occurs to her before either her genius teammate or Professor Xavier's star pupil. 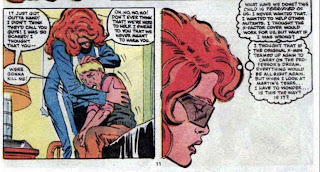 Teebore's Take
With this issue, Layton begins his first, only and last extended story arc on the title, an arc that will culminate in the debut of Apocalypse (arguably the most significant X-Men villain to come out of the 80s), albeit under the pen of another writer. For now, he kicks off the arc by introducing Frenzy and giving her a working relationship with Tower, his other creation, while hinting at additional team members, all in the thrall of a mysterious master. Unfortunately, the prospect of a longer story arc, regardless of its ultimate destination, does little to lift the title from its early doldrums, as the rest of the issue is more of the same, featuring characters' actions being dictated by the plot, lots and lots of fist-clenching angst, and more wrongheaded attempts to rewind the clock back to the Silver Age - this time, by resurrecting one of X-Men's oldest (and most resolved) love triangles. Apocalypse can't arrive soon enough.

Next Issue
Next week we cover the Firestar miniseries, then X-Factor Annual #1, because if there's anything this series needs, its an irrelevant, double-sized filler story.
Newer Post Older Post Home
Posted by Austin Gorton at 12:00 PM