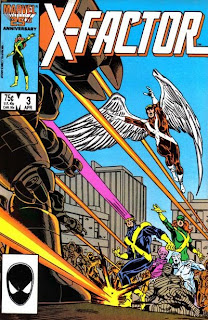 In a Nutshell
Beast regains his human look.

Plot
Carl Maddicks is able to pull Beast out of cardiac arrest, then begins preparing him for phase two. First, he has his son Arthur use his power to check in on Tower, and learns that X-Factor has overpowered him. He instructs his son to lock out Tower's mind, and just as X-Factor is about to cut a deal with Tower to learn Beast's location, Arthur takes control and Tower's mind goes blank. As Maddicks works on Beast, the captive mutant screams in pain, breaking Arthur's concentration and allowing Tower to tell X-Factor about Maddicks and point them toward Ryan Bio-Chemical, the facility where Beast is being held. That night, X-Factor storms Ryan Bio-Chemical, splitting into pairs. Angel and Cyclops are met on the roof by high tech security guards, while Iceman and Marvel Girl trigger alarms on the ground floor.

Both groups fight their way to the subbasement, where a now-bandaged, comatose Beast is being held, and confront Maddicks. Fearful they'll harm his son, he tells them everything, including his attempt to reverse the mutation process on Beast in order to do the same to Arthur. Just then, more security forces arrive, and an alarmed Maddicks tells them that because the level is top secret, they'll have orders to shoot to kill. Worried they'll kill anyone who looks like a mutant, including Arthur, he rushes X-Factor out a bio-hazard tunnel, eliciting a promise from them to look after his son. As they escape, Maddicks is gunned down as Arthur telepathically watches. The next morning Beast awakens from his coma, removing his bandages to discover that he's lost his fur and regained his human look.

Firsts and Other Notables
Beast loses his fur and regains his human look as of this issue (he retains his original large hands and feet), a return to his Silver Age status quo that will stick around for the next thirty odd issues. I've seen these changes explained as alternately a desire on the part of the creators to further cement the "original X-Men" feel of the book and to make the whole "fake mutant hunters" ruse easier to handle by reducing the number of characters who can't pass for human (now we're just down to Warren, who, as we've seen, can hide his wings in a backpack). I suspect its a little bit of both. 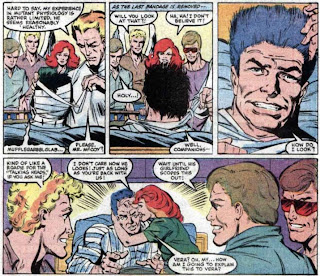 Carl Maddicks explains to X-Factor how he survived his apparent death in Amazing Adventures #11, but by the end of the story, he's seemingly killed again, a death which, as far as I know, has stuck. 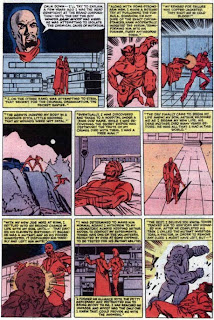 Maddicks' death leaves his son an orphan in the care of X-Factor, making Artie the second of X-Factor's wards, after Rusty. In a genuinely sad moment, Artie's power enables him to watch as his father is killed, buying X-Factor time to get the boy to safety. 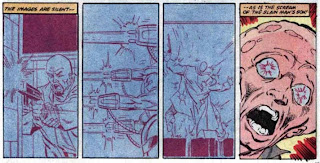 Senator Thompson, a heretofore unknown member of the Mutant Affairs subcommittee and a friend of the Worthingtons, visits X-Factor and suggests to Hodge that X-Factor's mutant hunting business may be doing more harm for mutants than good, meaning this random, one-off character has more sense than everyone else in the book. He'll pop up again for one more appearance in X-Factor Annual #1, but the character never appears after that, whatever role Layton had in mind for him lost when Layton leaves the book. 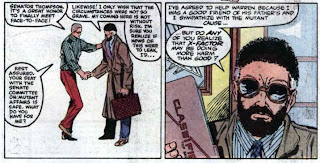 A Work in Progress
After Maddicks sees X-Factor, in their costumed guises, conversing with Tower, he wonders where X-Factor is, musing that they must have thought his call last issue was a hoax. 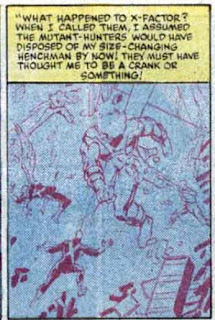 In addition to visually projecting peoples' thoughts, this issue Artie is able to "mindlock" Tower, taking control of his mind and effectively shutting him down, an ability I don't think he ever exhibits again.

X-Factor continues to be a terrible team, using their real names and calling themselves X-Factor while in costume in public, and while Maddicks sacrificing himself was a plot device necessary to get Artie involved with X-Factor and Beast was in need of medical attention, you have to wonder if all four super-powered mutants were required to ferry Beast and Artie to safety and if perhaps one or two could have helped Maddicks hold off their antagonists. 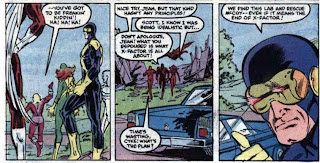 A moment that I genuinely found entertaining in this issue: attacking the complex of the company where Beast is being held, Warren notes that he owns stock in the company. Shortly thereafter, when he and Cyclops are confronted by the company's's security forces, he asks them if it would make a difference if he told them he was a major stockholder... 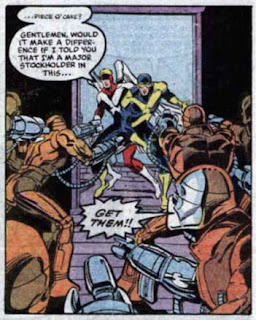 Cyclops is once again calling out for randomly-numbered maneuvers. 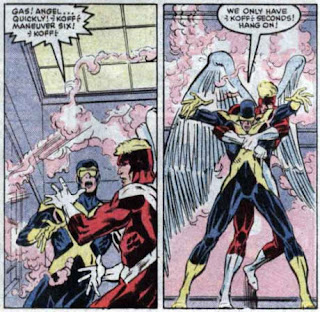 I Love the 80s
Early in the issue, there's actually a scene in which the male characters discuss their next move while Jean sits off to the side, before Cyclops approaches her and tells her the decision they've made. Apparently, you can take the girl out of the Silver Age... 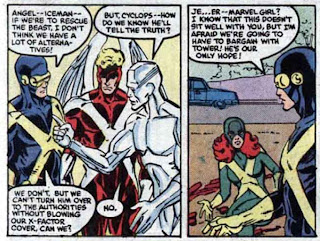 Scott Summers, Husband of the Year
Since last issue, Scott has decided that the disconnected phone at his Alaskan home means Maddie has moved out, more or less dusting his hands dustily of any further responsibility to his wife and son as a result.

Later, he worries that if he tells Jean about Maddie, he'll lose her too (poor guy might end up with no identical redheads!), but decides to come clean anyway. However, just as he's about to tell Jean the truth, they're interrupted by Hank regaining consciousness, and rather than finishing his sentence or, you know, bringing up it again after checking on Hank, it's dropped once more. 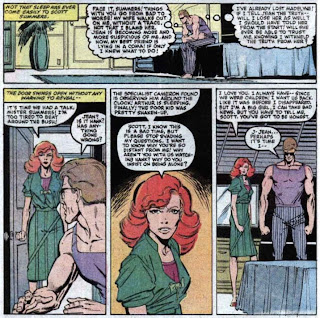 Human/Mutant Relations
Before Tower goes his separate way, Jean makes a plea for him to join them and use his mutant power for good, a spiel which Cyclops later says is what X-Factor is all about. 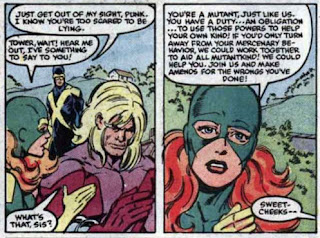 Teebore's Take
This is at least a little bit better. The characters are all still acting like idiots, while the only person to even suggest that posing as mutant hunters may not be a wise idea is a random senator introduced in this issue who appears for two panels, but Maddicks at least turns out to be more than a one-dimensional villain, motivated as he is to help his son (whose mutation is at least somewhat physically debilitating, giving Maddicks' motivations more heft than the usual straight-forward anti-mutant rhetoric) and sacrificing himself in an effort to help Artie survive. Having the escaping Artie able to watch his father's final sacrifice also adds a poignancy that this story probably hasn't earned, but which helps the issue nonetheless (though "young boy watches his father die" is pretty low hanging fruit in terms of generating sympathy for a character).

Of course, in the end, this whole issue and overall story is ultimately about nothing more than a continued effort to setup the book's premise and make the whole everything feel even more retro, as the notable development is Beast losing his fur and ape-like appearance. And like the rest of the character "developments" in this series, Beast's return to relative normalcy is another step backwards, wiping away years of development and the interesting juxtaposition of Hank's intelligence with his animalistic appearance all so things can look more like they did in the sixties. So while this is the first issue to offer up some interesting and entertaining moments, the series as a whole is still mired in anachronistic and mystifying characterization and struggling under the weight of its flawed premise.

Next Issue
Uncanny X-Men #205 puts Wolverine in the spotlight, New Mutants #40 puts Magneto in the cross hairs of the Avengers, and X-Factor #4 puts the series one issue closer to Layton's departure.
Newer Post Older Post Home
Posted by Austin Gorton at 9:00 AM