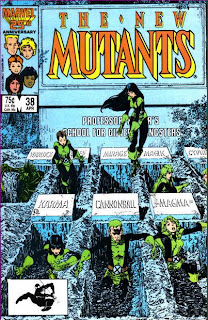 In a Nutshell
Magneto struggles to help the New Mutants in the wake of their encounter with the Beyonder.

Plot
Magneto dreams of the New Mutants battling first Sentinels and then the Hellions, forced to watch and unable to help them. The dream ends with the New Mutants returning to graves on the mansion grounds. The next morning, Magneto discusses the dream with Sharon Friedlander: it occurs each night, and is shared amongst the New Mutants and himself. Just then, the students come down for breakfast, polite but sullen and depressed. That evening, Magneto broods over his inability to help his charges when he's visited by the White Queen, who offers to admit the New Mutants to her school and help them with her telepathy. Magneto flatly rejects her offer. The next morning, Magneto's frustration at his students' apathy towards their lessons frustrates him further.

As Dani tends to Brightwind, she's visited by Thor, currently trapped in the form of a frog, who urges her not to give in to despair. The encounter snaps her out of her funk. Later, Magneto brings the New Mutants to a dance at the local high school, but they remain unresponsive. The following morning, Magneto meets with Doug's parents, who are considering pulling him from the school as a result of his depression. Outside, the Hellion Empath watches this exchange until he's found by Sharon and Tom Corsi. Empath turns his power on them, making them desire each other over all other concerns. The following day, Magneto calls the New Mutants to his study, having made a decision: he is transferring them to the White Queen's Massachusetts Academy. Dani objects, and refuses to go, but the rest of the team quietly consents and leaves with the White Queen, as Magneto tells himself he's made the only decision he can.

Firsts and Other Notables
The New Mutants were resurrected by the Beyonder in Secret Wars II #9, with the mansion restored by Molecule Man in Avengers #266. As Dani explains in this issue, when the New Mutants were resurrected, it was done in such a way that they remember their deaths and with the knowledge that they could be killed again at any time, leading to their dulled emotional states, a condition which will persist through issue #40.

As a result, Magneto, acting in what he believe to be the best interests of his students, ultimately decides to close the school and disband the New Mutants, sending them (with the exception of Dani, who objects to the idea) to the White Queen's Massachusetts Academy in the hopes that the White Queen's telepathy can help them in ways he cannot.

This issue reveals that Magneto is using a new secret identity, that of Michael Xavier, Charles Xavier's older cousin, an identity created for him by Professor X (presumably in anticipation of Xavier asking Magneto to take over the school, as he wouldn't have had time to do so after he actually asked him). 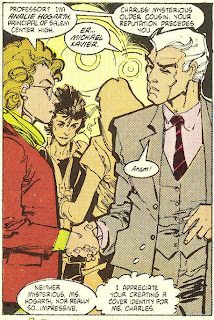 Claremont also does a fair amount of world building in this issue, establishing that Sharon Friedlander is entrenched as the school nurse, and showing that Stevie Hunter now conducting dance classes at the mansion. Furthermore, its revealed that the carriage house on the grounds is being used as a stable for Brightwind.

We meet Doug's parents for the first time, and learn that his father, Phillip, is the school's attorney. 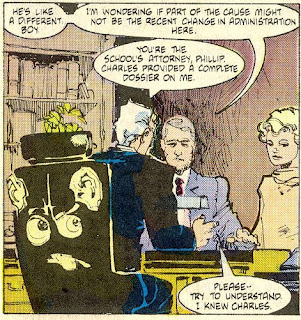 Empath pops up again, having presumably been freed from the power block placed on him by the White Queen as he's now using his power again. It's revealed that he's affecting Magneto (presumably making him feel more desperate and depressed), and when he's discovered by Tom and Sharon, he turns his power on them, filling them with carnal desire for one another, essentially making them sex themselves to death. 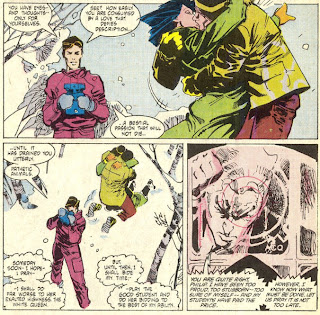 In the dream, Dani pulls an image of Hellion Tarot's heart's desire, and its of her kissing a New Mutant, a reference to the fact that Tarot pulled the Lovers card during the Hellions first encounter with the New Mutants in issue #17. Here, the New Mutant vaguely resembles Roberto, though in a future issue, Tarot will show some affection towards Doug, before this minor subplot is largely forgotten. 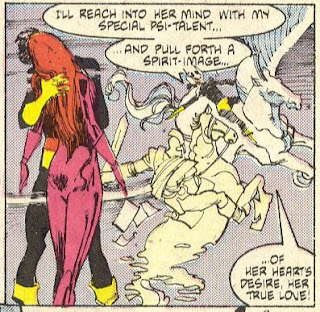 Dani snaps out of her post-resurrection funk after encountering Thor, who, at the time, had been turned into a frog by Loki in an act of vengeance (specifically in issue #363 of Thor). Presumably, it is some combination of her rapport with animals and her status as a Valkyrie that allows her to perceive the frog as Thor. 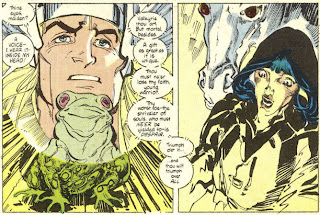 Rick Leonardi fills in on pencils, inked by Bill Sienkiewicz. This is Sienkiewicz's last issue on the series, ending an involvement, on varying levels, that stretches back to issue #18. Next issue will feature another guest artist, before Jackson Guice takes over as the new regular penciller with issue #40.

Art Adams provides the cover to this issue, one of the series' more memorable covers.

A Work in Progress
The opening pages of this issue constitute a recurring dream the New Mutants are experiencing and sharing with Magneto, yet at one point, Karma thinks to herself - I'm not sure how that's possible, if the depiction we're seeing is of Magneto observing the dream. 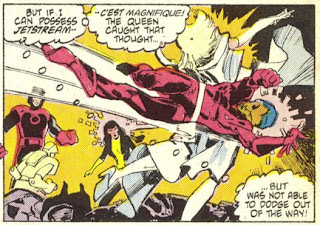 As the dream ends and the New Mutants return to their graves, Dream Doug admonishes Dream Magneto for sending them to bed, saying he likes almost dying. In an eery bit of foreshadowing, Magneto tells him that someday he shall.

Magneto notes that his psychic sensitivity is what allows him to share the New Mutants' dream, and ponders that if he's sensitive enough to it, it's possible that the White Queen is aware of it as well.

He also laments Xavier's absence, and the fact that he was a born teacher, where Magneto is not. 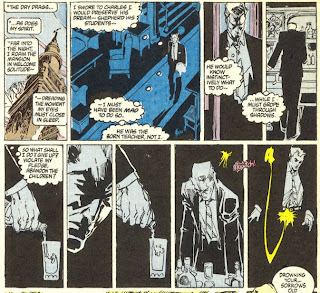 It's established that in the wake of their death and resurrection at the hands of the Beyonder, in addition to being emotionally numb, the New Mutants' skills have regressed to roughly what they were before coming to Xavier's. 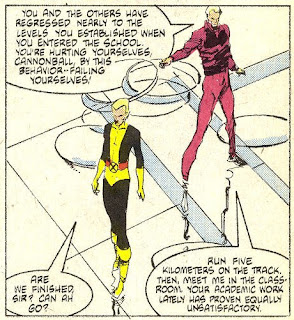 Hoping to snap the New Mutants out of their funk, Magneto takes them to a dance at the local high school, though many of the local students still consider them to be snobs.

In addition to Dani, its revealed that Warlock was largely unaffected by his encounter with the Beyonder, despite being killed alongside his teammates. 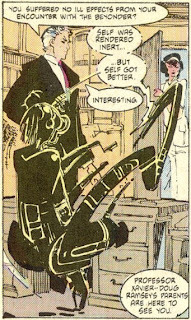 I Love the 80s
Doug is rocking some pretty fly threads in dance class. 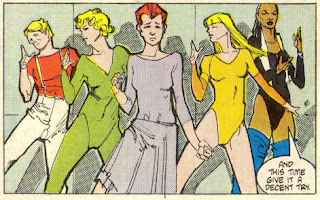 Claremontisms
Empath hopes -- prays -- to someday pay back the White Queen for humiliating him.

It's in the Mail
The letters page is back, running letters reacting to issue #25, including one which admonishes the creators for their use of demons and suggesting that showing Illyana struggling with her demonic side is letting the demons win. Jackson Guice's arrival is also teased.

Teebore's Take
With this issue, Claremont uses the New Mutants' encounter with the Beyonder to kick off a story that will run for the next two issues, and its a storyline that works (and manages to rise above its origins as a Secret Wars II tie-in) because it takes advantage of the new status quo of the book to, quite simply, tell a story that couldn't have been told if Professor Xavier were still around. Though stripping the New Mutants of much of the improvements they've made in the use of their powers is a bit of cop-out (in terms of recreating old conflicts instead of creating new ones), the malaise they're experiencing in the wake of their deaths and resurrections is more effective simply because Xavier isn't around to telepathically fix the problem (the effectiveness is also aided by the artwork, which manages to visually depict that malaise as well).

As a result, Magneto is thrust into the spotlight (in fact, this issue is really all about Magneto, with most of the dead-eyed New Mutants functioning as a supporting cast), as his devotion to his students, his frustration at Xavier for putting him in this position, and his determination to do right by his charges are all made clear in the span of the issue. Its a fantastic bit of writing that establishes Magneto's place in the book while highlighting the differences between he and Xavier. It's the best use of reformed Magneto yet, and it begins one of the series' most bleak and psychologically-complicated stories.

Next Issue
Tomorrow, Beast gets kidnapped in X-Factor #2, followed next week by Nightcrawler's adventures in Uncanny X-Men #204 and the New Mutants as Hellions in New Mutants #39.
Newer Post Older Post Home
Posted by Austin Gorton at 2:00 PM