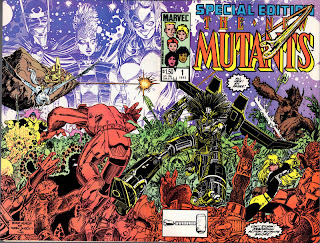 In a Nutshell
Loki brings Storm and the New Mutants to Asgard.

Plot
Loki, plotting both revenge against the X-Men and to seize power within Asgard, decides to transform Storm into a new god of thunder. He tasks the Enchantress with abducting Storm and her companions, assuming they will be the X-Men. However, Storm's current companions are the New Mutants, who are enjoying a vacation on the island of Kirinos when the Enchantress teleports them to Asgard. As Loki begins to transform Storm, the Enchantress attempts to kill the New Mutants, believing them to be the X-Men.  Illyana tries to telelport her friends to safety, but the Enchantress' magical wards cause Illyana to remain behind while the rest of the New Mutants are scattered across time and space. Each finds themselves in a different part of Asgard: Karma stranded in a vast desert, Doug in a mead hall, Rahne in a forest, where she helps a werewolf like herself escape a pack of giants, Warlock in Hel, Roberto in a tavern, where he becomes a local hero, Amara amongst a group of Dark Elves who transform her into a fairy, Sam in a cavern beset by trolls, in which he saves a Dwarf princess, and Dani on a grass plain, where she frees a captive winged horse and fights off a group of hunters, after which she is asked to join a group of warrior women riding similar steeds.

Back in the Enchantress' fortress, the sorceress releases Darkchilde, the dark side of Illyana, and tasks it with tracking down her teammates. Leading a horde of soldiers, she first finds Doug, now working in the Mead Hall, but he's rescued by Warlock. Rahne, who has fallen in love with the Wolf Prince she saved, and Roberto, who has befriended the Warriors Three, are both captured by Darkchilde while Sam, having gained the favor of the Dwarf Lord Eitri by saving his daughter, is reunited with Amara when she's sent by the Dark Elves to attack the dwarfs. Amara is ultimately captured, and Eitri is able to restore her memories, but not her human form. Dani, overhearing her new friends speak of her participating in some kind of blood ritual, flees their company. Meanwhile, Loki visits Eitri and asks him to create a new enchanted hammer for Storm, the equal of Thor's. Sam and Amara overhear this, and learn that Storm is a captive of Loki. 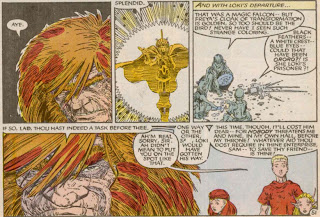 Elsewhere, Karma emerges from the desert, having shedded the weight she'd gained when possessed by Farouk, and is greeted by Warlock and Doug. But the threesome is quickly attacked by Darkchilde. Holding their own, they're eventually joined by Dani, and Karma is able to take control of Darkchild and stop the attack. Gathering the rest of their teammates, the New Mutants storm the Enchantress' castle. As they battle her forces, Karma forces Darkchilde to merge with Illyana, breaking the Enchantress' hold on her, then turns her attention to the Enchantress. Karma is able to take control of the sorceress, but fears she won't be able to hold her for long. Illyana instructs her to simply force the Enchantress to lift her protective wards, at which point Illyana is able to teleport everyone to Limbo, where the Enchantress is powerless and Illyana reigns supreme. Debating their next move, several of the New Mutants express an interest in returning to Asgard for good, but Sam says they can discuss that later; what matters now is rescuing Storm. Leaving the Enchantress in the care of S'ym, they return to Asgard to try and defeat Loki.

Firsts and Other Notables
This issue marks the first "New Mutants in Asgard" story, a trope that will, for better and worse, pop up again in the history of this book and these characters. As a result, it introduces a handful of supporting characters who will reappear whenever the New Mutants end up back in Asgard, chief among them the Wolf Prince Hrimharri, who falls in love with Rahne (he actually is referred to only as the Wolf Prince in this story; his name is revealed in a later one). The story also features characters who made previous appearances but will become recurring players in future New Mutants stories, such as the dwarf lord Eitri, who forged Mjolnir, Thor's hammer, and befriends Sam in this issue. 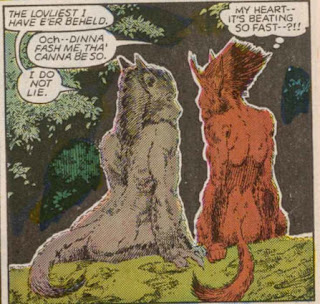 Of all the New Mutants, Dani emerges from this story the most changed. This issue marks the first appearance of her winged horse, Brightwind, who will return with her to Earth, and by rescuing him, she becomes a Valkyrie, one of the warrior women whom claim the souls of the honored dead and brings them to Valhalla. 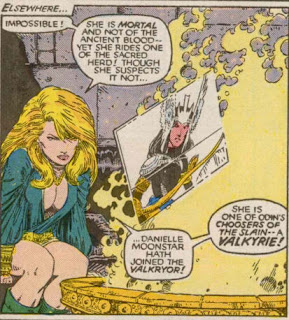 Uncanny X-Men Annual #9 reveals that this story takes place while Thor is storming Hel in Thor #361-362; his absence from Asgard gives Loki the idea and opportunity to use Storm to usurp Thor's position as god of thunder. In a larger sense, this story occurs during Walt Simonson's (husband of former X-Men editor Louise Jones) legendary run on Thor, shortly after Odin was believed to have died fighting the fire demon Surtur (who appears in this issue as the thing the Enchantress most fears).

This issue was meant to be the second New Mutants annual, but apparently it was expanded to include additional pages (at 64 pages long, it is technically a "triple-sized" issue, I believe), and thus was re-branded as a special edition.

Published concurrently with his work on Longshot, this issue features art from Art Adams, and represents his first collaboration with Chris Claremont and his first work in the X-Men universe. Terry Austin, the inker of John Byrne's X-Men work, does the inking.

A Work in Progress
The story begun in this issue constitutes Loki's attempt at revenge against the X-Men following the events of the X-Men/Alpha Flight limited series. While attempting to seduce Storm into becoming a new Asgardian thunder god, he tasks the Enchantress with destroying the X-Men (whom she believes the New Mutants to be), so as to not break his vow to not harm the X-Men.

As promised last issue, Storm and the New Mutants are vacationing on the Greek island of Kirinos, the same island at which Professor X recovered from his breakup with Moira per Uncanny X-Men #117.

Doug worries that his powers are no good in a fight, and on several occasions throughout this story, works in tandem with Warlock as Warlock takes a shape that allows him to protect Doug. As such, this issue marks the beginning of the close Doug/Warlock friendship. 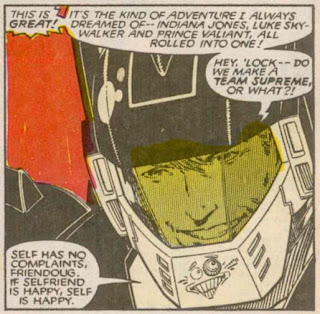 The Enchantress mentions briefly encountering the X-Men in Dazzler #2; she was something of a recurring foe in the early issues of Dazzler's solo series.

While in Hel, Warlock adopts the form of Longshot, and even though he seems aware of the coincidence, it must be simply that, as he's yet to meet the actual Longshot.

Roberto, who finds himself stronger than ever in Asgard, soaks in the adulation he receives for his heroic efforts, quickly becoming enamored with Asgard and appreciating a world where he's treated as a hero and untroubled. 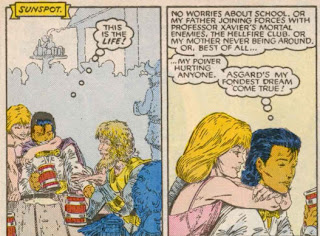 In something that I always found terribly clever as a kid, as a result of her months-long voyage across a desert, Karma manages to lose most of the weight she gained while possessed by Farouk, emerging more or less back to normal (also, in a thought that didn't occur to me as a kid, she must have also encountered a plastic surgeon in the dessert, who took care of what had to have been the folds upon folds of skin that remained even after she lost the weight). 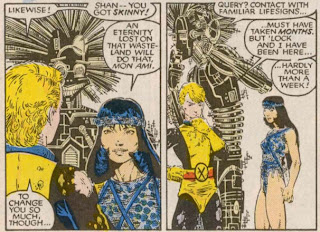 Karma declares that reuniting Darkchilde and Illyana will heal Illyana's physical wounds; I'm not sure how Karma would know that... 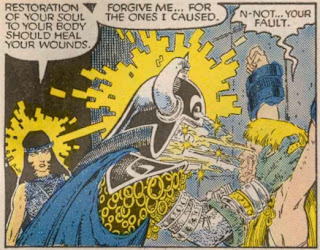 I Love the 80s
Also vacationing on Kirinos are Remington Steele and Laura Holt.

Though the issues opens with most of the New Mutants enjoying a day at the beach, and thus wearing swimsuits, Illyana's bikini makes her the most scantily clad of them all, and she spends pretty much the rest of the issue wearing little else. 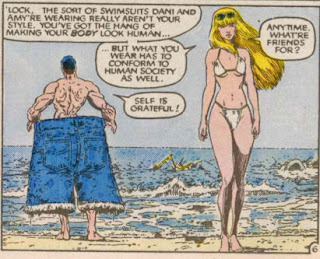 Sam spends his time in the realm of the dwarfs rocking a pair of cutoff jean shorts. 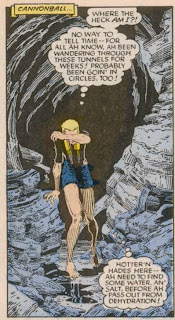 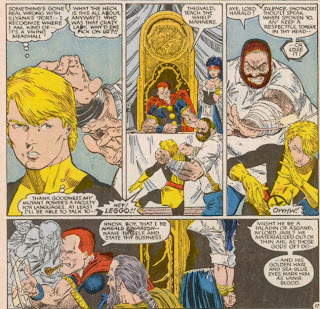 Upon meeting Brightwind, Warlock assumes the form of Gumby. 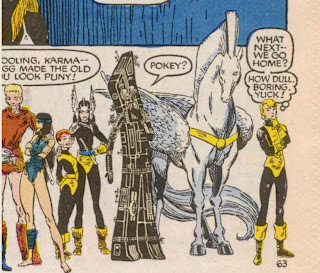 Young Love
After saving him from attacking giants, Rahne and the Wolf Prince quickly become smitten with one another. 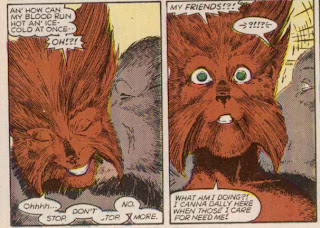 They're Students, Not Superheroes
After Dani leads the team in an impromptu training session during their vacation, Roberto protests, saying that the New Mutants don't need to train because they're not the X-Men, while Dani insists that since trouble seems to find them, they need to be able to take care of themselves.

Human/Mutant Relations
Roberto argues that the New Mutants should stay in Asgard, rather than return to a world that hates them. 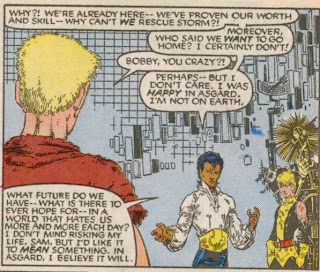 Teebore's Take
This and the corresponding X-Men annual constitute one of my all time favorite comic book stories. This certainly isn't the first (or last) time that Claremont weds his typically more sci-fi, grounded-in-a-social-metaphor characters to the tropes of high fantasy, but it's arguably his most successful iteration of the concept. A lot of that success has to be credited to some absolutely gorgeous artwork from Art Adams, who has already improved from his generally-strong work on the Longshot mini. His figures (especially the faces) are dynamic, his action clear and easy to follow, the level of detail he puts into each panel astounding without becoming distracting.

What also helps this chapter of the story to succeed is Claremont's attention to characterization. As in the best such stories, Claremont uses the fantastic setting to explore and deepen the New Mutants' as characters. The extra pages give him room to breath, and after the characters are scattered across Asgard, each is given several pages all to themselves, depicting their circumstances, before Claremont starts to draw the characters, one by one, back together. As a result of the way each character handles and reacts to their specific situation, each of these vignettes serves as a primer on their respective star, affirming existing characterization and/or revealing new depths. As a result, even though this story takes place in a pseudo-annual, the characters will not emerge from the story unchanged, as, for better and worse, they will return to Earth changed by these experiences.

Next Issue
Tomorrow, we wrap up this story in X-Men Annual #9, as the X-Men follow the New Mutants to Asgard, and the following week we examine the trial of Magneto in Uncanny X-Men #200.
Newer Post Older Post Home
Posted by Austin Gorton at 8:00 AM