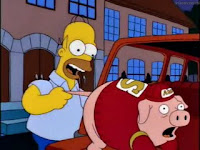 Or the One Where
Homer, uh, goes to college.

The Setup
After failing a nuclear inspection at the power plant, Mr. Burns learns Homer never went to college, and to placate the Nuclear Regulatory Commission, sends him to Springfield University to take a class in Nuclear Physics.

Notable Notes
The first episode produced as part of season five, this is also the last Simpsons episode for which Conan O'Brien will receive sole writing credit (he also contributes to the upcoming Halloween episode) before leaving to host Late Night with Conan O'Brien.

Doug, Benjamin and Gary, aka the nerds, Homer's college tutors/roommates, all make their first appearance in this episode.

Homer's now-classic misspelling of "smart" while singing "I am so smart" after getting accepted into college and accidentally starting the house on fire came about because Dan Castellaneta legitimately flubbed the spelling during a recording session; the writers realized it was much funnier and true to character that way, and left it in.

The scene in which Homer's roommates tells Marge they're arguing with some guys at MIT over who is the best Star Trek captain represents the first mention of the internet on the show. 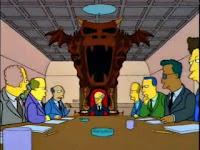 Quotable Quotes
Mr. Burns: Remember, your job and the future of your family hinges on your successful completion of Nuclear Physics 101. Oh, and one more thing: you must find the jade monkey before the next full moon.
Smithers: Actually sir, we found the jade monkey; it was in your glove compartment.
M. Burns: And the road maps?  And ice scraper?
Smithers: They were in there too, sir.
Mr. Burns: Excellent!  It's all falling into place...

Homer: Marge, someone squeezed all the life out of these kids.  And unless movies and TV have lied to me, it's a crusty, bitter old Dean!
Dean: Hi there! Hello, I'm Dean Peterson, but you can call me Bobby. I just want you to know if you ever feel stressed out from studying or whatever, I'm always up for some hackey sack.  Or, hey!  If you just want to come by and jam, I used to be the bass player for the Pretenders.
Homer: [bitterly] Boy, I can't wait to take some of the starch out of that stuffed shirt!

Dean: Homer, no one blames you for the accident, we simply feel you might benefit from outside tutoring.  I researched these names myself.
Homer: [to himself] Yeah, you've won this round, Dean...but the war isn't over.
[Homer exits, Dean's phone rings]
Dean: Hello?
Homer: Hello, Dean!  You're a stupid-head.
Dean: Homer, is that you?
Homer: Aah!

Doug: You really think you can get us back into college?
Homer: Absolutely! Now, the only antidote to a zany scheme is an even zanier scheme!
Doug: Why does it have to be zany? 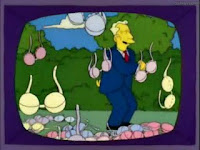 Teebore's Take
Another all time classic and personal favorite. In a lot of ways, this episode completes Homer's transition from a dim but well-intentioned character to a comically-large moron, and some fans point to it as the beginning of the Jerk-Ass Homer characterization that will dominate the portrayal of the character in later years. However, though Homer is indeed a jerk (and something of an ass) throughout much of this episode, that behavior in this case stems from a specific reason: his (hilarious) inability to separate his vision of college life (informed by countless TV shows and movies) from the reality. As a result, it's much easier to enjoy his antics, as they're born of an identifiable motivation, and not just an unfortunate character trait.

Additionally, this episode is a great example of one of The Simpsons strengths: its ability to parody something even while the episode itself is another example of the thing its parodying. Here, we have an episode that is, for the most part, and extended send-up of raunchy frathouse college comedies like Animal House and Revenge of the Nerds. But even though the episode is parodying the tropes of those kinds of stories, whether through Homer's inability to recognize the Dean as anything other than the bitter, crusty old men portrayed in those films or the way he completely blows off class in favor of one outlandish prank after another, it's also using those tropes to tell a story that fits firmly within that genre. Its a clever way of tweaking the conventions of something while still making it clear that the source material is highly regarded, and its something at which The Simpsons, at least in its heyday, excels.

Featuring Homer at his dumbest yet also arguably his funniest, this another all-time classic, one that cleverly manages to be both a parody and the source of the parody at the same time. 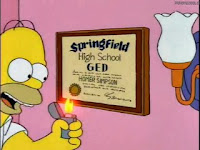