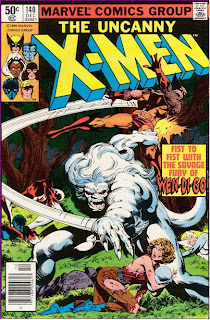 In a Nutshell
Wolverine and Nightcrawler fight Wendigo

Plot
Outside the X-Mansion, Colossus struggles to remove a tree stump from the ground when Angel drops in. Colossus explains that he finds the work clearing the ground to be a relaxing reminder of his former life, but then Angel is called away by Professor X. Xavier asks him his opinions of his new teammates, all of whom Angel has no problems with except for Wolverine. Calling him dangerous, Angel worries that Wolverine could hurt one of his teammates during one of his berserker rages. Professor X defends Wolverine, saying he has great potential and that Professor X considers part of his mission to help Wolverine fit into society. In Salem Center, Storm picks Kitty up from dance class, and finds herself jealous of the close relationship Kitty has developed with Stevie Hunter. Meanwhile, in Canada, Nightcrawler is attacked by Wendigo. He manages to elude the monster for awhile, but ultimately is punched into Alpha Flight's cabin and knocked out. Wolverine and Alpha Flight rush outside and manage to fight Wendigo off. 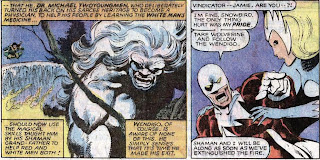 As Vindicator and Shaman deal with a fire started by Wendigo, Wolverine and Songbird proceed to follow him back to the cave where he's trapped Mrs. Parnall and her baby. Just as Wendigo is about to eat the woman, Wolverine attacks, flying into a berserker rage and managing to stun Wendigo enough to escape with Mrs. Parnall and her child. The creature soon catches up to them, but Wolverine is joined by Nightcrawler and Alpha Flight. With the group unable to do more than stagger Wendigo, Snowbird transforms into a wolverine and attacks with such ferocity that Wendigo is knocked unconscious. As Wolverine manages to talk Snowbird out of her own berserker rage, Shaman is able to reverse the spell on Wendigo and transform him back into Georges Baptiste. Vindicator quickly takes the man into custody, and tells Wolverine he'll speak to the minister about Wolverine's resignation, ensuring he'll have no more trouble with Canada. However, when Vindicator meets with the Prime Minister, he's told that Alpha Flight has been disbanded. Meanwhile, in New Mexico, Blob escapes from prison and departs to join the new Brotherhood of Evil Mutants.

Firsts and Other Notables
This is the first issue to offer a significant look at Wolverine's past, as we get a handful of panels showing a flashback to his time with the Hudsons, establishing they discovered him near death in the woods years ago and helped nurse him back to health. It's also stated that the Canadian Secret Service was responsible for giving him his adamantium skeleton and claws, and his ire at that is why Wolverine left to join the X-Men when Professor X approached him. Not surprisingly, Wolverine's back story has been endlessly (and in many cases, needlessly) explored, deepened and retconned (then retconned again) throughout the years, and while the Canadian government's role in giving him his adamantium skeleton remains technically true, his knowledge of that fact in this issue was, for many years, retconned out in favor of the idea that Wolverine had little knowledge of the people responsible for giving him his metal bones. 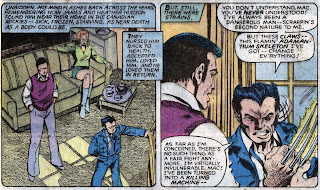 Wolverine also declares that he's been two things in his life: a soldier and a spy. Again, later stories will reveal that to be less than true, although it can be argued that at this time, it's true as far as Wolverine can remember. 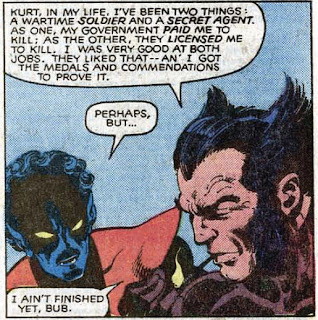 Alpha Flight is disbanded by the Canadian government at the end of the issue, ostensibly due to budget cuts, though it's suggested the team will remain together in some capacity. Alpha Flight will next appear in the first issue of its own series in 1983, written and drawn by John Byrne. 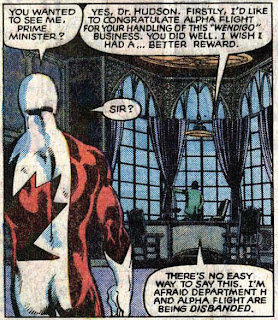 In a setup to next issue, Blob makes his triumphant return to X-Men, busting out of a specially-designed prison cell via a technique he learned from a lady "lawyer" who had visited him earlier and promised him transportation away from the prison and a place with the new Brotherhood of Evil Mutants if he could escape his cell. 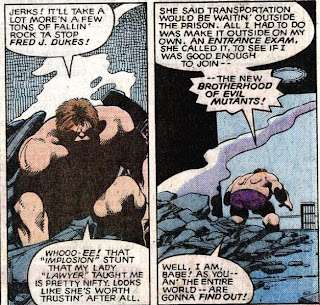 A Work in Progress
Colossus gets a nice scene where he explains that he finds nature humbling and which shows he doesn't express himself very well, which Angel quickly contradicts. 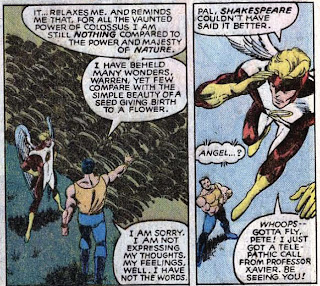 Angel's animosity towards Wolverine is established for the first time, and Professor X mentions Wolverine's potential as a super-hero and leader. While Angel's dislike of Wolverine more or less comes out of left field here, the backup story in Classic X-Men #1, set after the events Giant Size X-Men #1, retroactively establishes the mutual dislike between the two characters.

Storm's jealousy of Stevie Hunter is much more apparent this issue, and it's clear that Storm has already become very protective of Kitty. 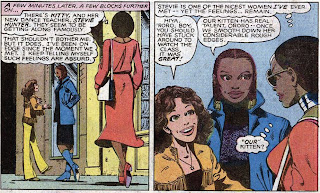 I Love the 80s
En route to pick up Kitty from dance class, Storm is pestered by a guy who wants to take her to a disco.

It's rather goofy that Snowbird's just-a-regular-wolverine berserker rage is able to defeat Wendigo when the berserker rage of Wolverine, who is presumably much stronger than a wolverine and comes complete with unbreakable bones and claws, wasn't able to do so. 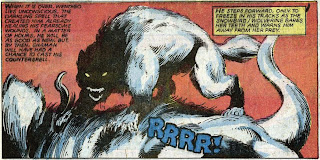 The Canadian Prime Minister is still depicted as Pierre Trudeau. 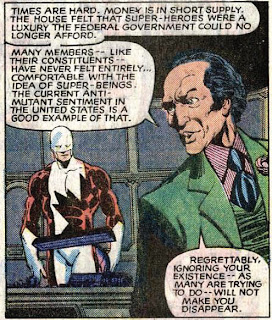 Despite the fact that she's cowering in fear for her life and the life of her infant child, Mrs. Parnall gets sexed up on the cover of this issue, flashing a little side boob.

Claremontisms
We get our first overt callback to "The Dark Phoenix Saga", complete with a footnote, as Wolverine must talk a wild Snowbird down in the same manner as Cyclops did Phoenix in issue #136.

This issue opens with Colossus musing on his past as a farmer and his current life as an X-Man while trying to remove a tree stump. This is not the last time we'll see an X-Man trying to clear the grounds of the school of a tree, as it becomes a recurring device Claremont uses when he wants to do an introspective scene with a character. 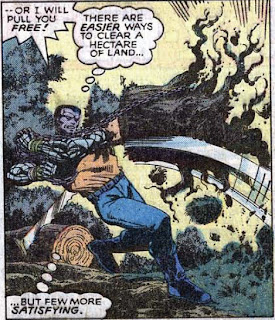 The Best There Is at What He Does
Wolverine and Nightcrawler debate the morality of Wolverine's actions in a great little scene.

It's in the Mail
I'm not sure what cracks me up more: that someone sent in this letter, or that it was printed and received a response. 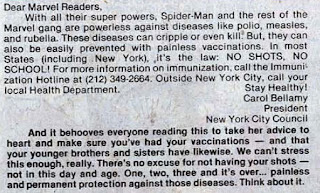 John Byrne on Nightcrawler
"After three years on the book, I finally figured Nightcrawler out. I came to The X-Men being very down on Nightcrawler because I felt that Cockrum had given him far too much of the spotlight. Then I proceeded to give far too much of the spotlight to Wolverine but [laughter] I felt in those early days it was Nightcrawler Comics co-starring the X-Men, so I practically wrote him out of the book as far as my end of it. I just did almost nothing with Nightcrawler...Finally, after three years on the book, I decided that Nightcrawler was the one things happened to. He was the guy who got the stupid stuff happening to him for no apparent reason. That was the whole point of the bear coming up and tapping him on the shoulder and the hair standing on end, and doing the Bugs Bunny wrapping-around-Wolverine thing [in issue #139]. He was going to be the intentional silly point of the book...And of course that proved to be almost my last issue, so I never got to do anything with that, once I finally figured out who he was."

John Byrne on Wolverine
"As I saw it, Wolverine was in the X-Men so he could be controlled. He was a homicidal maniac, and Professor X wanted to keep him in check. (I used to say the perfect Wolverine moment would be to find him eating breakfast in the kitchen at the Mansion. Kitty walks in and says, 'Good Morning' in just the wrong tone of voice. The other X-Men come in later, to find Wolverine still sitting at the table eating his Cheerios, and Kitty in 57 pieces on the floor.) I never care for the 'berserker rage' or 'ninja' stuff that came in later. That suggested he was in control, or at least in more control that [sic] I thought he should be."

Nickerson, Al. "Claremont and Byrne: The Team that Made the X-Men Uncanny." Back Issue August 2008: p11.

Teebore's Take
Falling as it does between Claremont and Byrne's two epic storylines, I've never been a terribly big fan of this two part story. The preceding issue is enjoyable enough, exploring as it does the post-"Dark Phoenix Saga" status quo and featuring some nice character development for Wolverine and Nightcrawler. This issue, unfortunately, settles in as a generic action story, and while Wendigo is certainly a fitting villain given his connection to Wolverine's past (publishing-wise), he isn't exactly a dynamic or interesting character. Granted, "generic" for Claremont and Byrne is, even in this issue, a darn sight better than most super hero action stories, and the action sequences here certainly showcase the dynamism we've come to expect from Byrne and Austin, and Claremont continues to use the action sequences to deepen the characters as we get a closer look at Wolverine.

But in the end, this story suffers from its timing. Coming on the heels of "The Dark Phoenix Saga" while knowing what's to come (both "Days of Future Past" and Byrne's departure), the biggest problem with this issue is that, after the introduction of a new status quo last issue, the majority of this issue is devoted to what is, essentially, a Wolverine solo story. In and of itself, that's not a bad thing, but knowing that we'll get only one proper story featuring the entirety of the new team established last issue before Byrne leaves (and, really, only two stories with that team at all), devoting this issue to a one-off adventure featuring only two of the team members feels like a wasted opportunity. Granted, it's a criticism born of hindsight and context, two things that wouldn't have affected readers when the issue was originally published, but as it stands, this Wendigo story feels like its spending time that should have been spent elsewhere.

Next Issue
Days of Future Past!
Newer Post Older Post Home
Posted by Austin Gorton at 8:00 AM