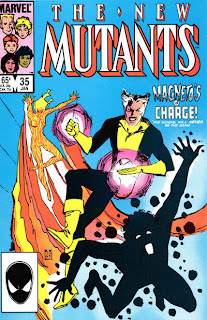 In a Nutshell
The New Mutants react to the presence of their new headmaster, Magneto.

Plot
The New Mutants return to the X-Mansion to discover that Professor Xavier will not be returning to the school, and that he's asked Magneto to take his place. The kids are generally distrustful of him, some, such as Bobby, moreso than others, but Magneto simply asks for time to prove himself, then sends them to the Danger Room so he can see them in action for himself. As the students dress for their training session, they discuss their feelings about Magneto. During the session, Magneto proves that there is much he can teach them, but they remain wary of trusting him. That evening, the team has dinner at Harry's Hideaway and go over the days' events. When Sharon Friedlander arrives to drive them home, Dani, troubled by her new role as a Valkyrie, decides to walk home. En route, she's attacked by a group of college guys who had seen her leave Harry's alone. She's saved by Brightwind, who sensed her distress through their rapport, and the pair fly back to the mansion. 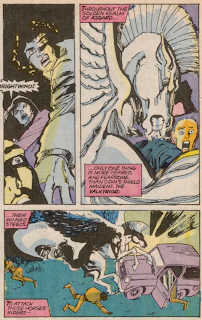 As she's tended to by Sharon, Magneto, determined to protect his students, asks Brightwind to take him to the people who attacked Dani. The New Mutants observe him leaving and decide to follow him. They watch as Magneto storms into a nearby frat house and confronts Dani's attackers. Destroying their house, he tells them that while once he would have killed them for their actions, he has learned a better way, and cautions them against continuing down the path of cruel and bloody violence on which they are treading, as one day they will encounter someone less merciful than he. Magneto departs, but the New Mutants, impressed by his actions, stay behind to watch as one of the attackers calls the police and turns himself in. Returning home later that night, the New Mutants are stopped by Magneto and told Dani will be okay. As they go to bed, Bobby concedes he may have been wrong about Magneto.

Firsts and Other Notables
Magneto is considered to have joined the New Mutants as of this issue, taking over as headmaster of Xavier's school at Xavier's request after the later was forced to leave Earth as a result of his injuries in Uncanny X-Men #200. Though that issue suggested the possibility that Xavier's absence may not be prolonged, Magneto acts in this issue as though Xavier is gone for the time being (something which will indeed be affirmed in Uncanny X-Men #201).

Bill Sienkiewicz returns, in a manner, inking over Mary Wilshire's pencils. The Wilshire/Sienkiewicz team are considered to be the books new regular artists, though they'll last only three issues.

In what I believe is the book's first printed Statement of Ownership, the title is said to have sold and average of 307, 895 copies in the previous twelve months, with 263, 956 copies sold in the month nearest to the filing date.

A Work in Progress
Magneto tells the New Mutants that he is taking over the school to honor his friendship with Xavier, and that he hopes by teaching them, he can, in part, make amends for his past actions. 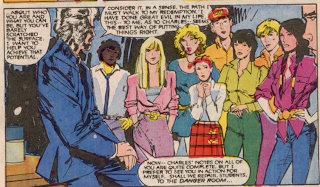 In a testament to how much her character has grown, Dani, who once fervently hated Xavier, is saddened by his absence, as she'd hoped he'd be able to help her come to terms with her new role as a Valkyrie.

When Doug jokes about Bobby joining the Hellfire Club, Bobby freaks out.

Of all the New Mutants, Illyana is the most initially accepting of Magneto, comparing the darkness in her own past to his and suggesting he be given the benefit of the doubt.

Tom Corsi and Sharon Friedlander, following their ordeal during the "Legion" story in issues #26-28, are back at the school and serving as faculty.

Prior to the team's Danger Room session, Magneto sidelines Doug, telling him he won't be needed, since his power isn't physical, something which enrages Doug. To Magneto's credit, he realizes after the fact that he was too harsh with the boy. 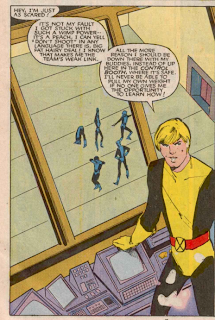 The kids spend an evening at Harry's Hideaway, last seen in issue #23.

At one point, Illyana has to explain to Warlock what food is, and later, he wonders if the"whup-whup" sounds made by helicopters serve as their language. 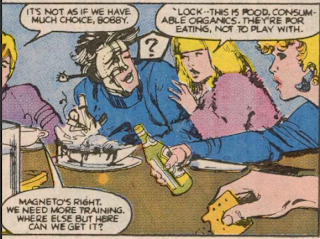 Young LoveIt's revealed that Lee Forrester has returned to her fishing boat, her responsibility to her crew and Magneto's to the school keeping them apart. 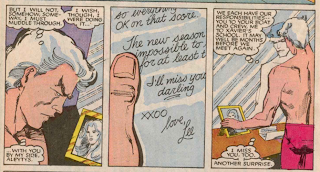 They're Students, Not Superheroes
Magneto affirms Xavier's goal to train the New Mutants in the responsible use of their powers, and later, the New Mutants worry about Magneto grounding them.

It's in the Mail
The letters page returns, covering reactions to issues #24 and #25. The Amara-centric story featuring Hercules, which eventually appears in issue #81, is mentioned again.

Teebore's Take
Following on from X-Men #200, this issue sees Magneto introduced as the New Mutants' new teacher/headmaster, and marks the beginning of the second phase of the title, one which will find the New Mutants led by Magneto, to varying degrees of success, for the next forty-odd issues. Coinciding with the return of Bill Sienkiewicz (to an extent), the introduction of Magneto to the mix brings a renewed energy to the book. The story in this issue is self-contained and hardly groundbreaking, logically dealing as it does with the New Mutants' various reactions to Magneto's new role and Magneto's attempts to, if not win their trust, at least win the opportunity to try and earn it, but through those reactions we get more character interaction and development than in the previous three issues combined. As with New Mutants Special Edition #1, each character is given at least one moment to express their reaction to Magneto's presence (admittedly, some characters' moments are briefer than others), and those reactions both deepen the characters and setup future conflicts for the book, two things which, after the relatively ho-hum "Hunt for Karma" story, are a welcome presence.