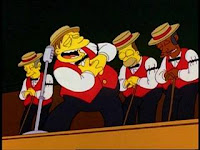 Or the One Where
Homer reminisces about his time in a world famous barbershop quartet alongside Barney, Apu and Principal Skinner.

The Setup
While at the Springfield swap meet, Bart discovers an old record with Homer on the cover.

Notable Notes
This episode parodies the rise and fall of the Beatles, and George Harrison guest stars as himself, the second Beatle to do so (after Ringo Starr in season two). David Crosby also guest stars, as himself, his second appearance on the show (following last season's "Marge in Chains").

The Dapper Dans, a barbershop quartet that performs at Disneyland, did the singing for the Be Sharps, though usually whichever member of the regular cast had the melody sung it himself, while the Dapper Dans backed him up.

After the Be Sharps win their Grammy, Spinal Tap can be seen at the after party.

Principal Skinner tries on a prison mask from his time in 'Nam, with the prisoner number 24601, which was Jean Valjean's number in Les Miserables (and was previously used as Sideshow Bob's prisoner number in season two's "Black Widower").

This episode was produced as part of season four, and was chosen to air as the season premiere because of the involvement of Harrison.

This is the first flashback episode to not center on a significant Simpson family moment, like Homer and Marge's wedding or Lisa's first word. Like many of the flashback episodes, it suggests continuity questions the show really isn't concerned with, such as why, before and after this episode, little reference is made by any members of the Be Sharps to each other about their past together (say, for example, when Skinner was dating Patty in season two or when Apu moves in with the Simpsons later this season). 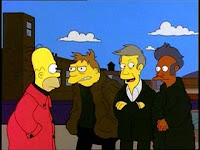 Marge: Homer, you're going to be famous!
Homer: Yeah, but I'm not gonna let it change our lives.  I'll be the same loving father I've always been.
Marge: Hmm, have you seen Bart?
Homer: Ehh, I stuck him somewhere.

Homer: Wait till I tell Marge!
Nigel: Oh, yes...Bouffant Betty. Well, I would prefer if we kept your marriage a secret. You see, a lot of women are going to want to have sex with you, and, er, we want them to think they can.
Homer: Well, if I explain it to Marge that way, I'm sure she'll understand.
Marge: [cries loudly]
Homer: C'mon, honey!  It'll only be until we finish our tour of Sweden.

Lisa: I can't believe you're not still popular.
Bart: What'd you do?  Screw up like the Beatles and say you were bigger than Jesus?
Homer: All the time! That was the title of our second album. We were about to learn an iron law of show business: what goes up must come down.
Lisa: What about Bob Hope?  He's been consistently popular for over fifty years.
Bart: So's Sinatra.
Homer: Well, anyway, we were all getting tired of --
Lisa: Dean Martin still packs 'em in.
Bart: Ditto Tom Jones.
Homer: Shut up!

Moe: Hey, Barney! What'll it be?
Barney: I'd like a beer, Moe!
Yoko: I'd like a single plum floating in perfume, served in a man's hat.
Moe: [reaches under bar] Here you go. Teebore's Take
And with that, season five begins. We're well into the golden age of the show at this point, and this could quite well be my favorite season of the series. It's certainly one of the seasons I've watched the most, airing as it did at the perfect nexus of the time in which I was recording Simpsons episodes on tape while also having the free time to go back and watch them. Many an afternoon after school was spent re-watching the episodes of this vintage.

The dumbing down of Homer begins in earnest in this season, and the transition away from Bart as the show's breakout character and towards Homer is all but complete, yet the end result is still positive (we're several years out from the consistent presence of Jerk Ass Homer). This is also the season where more and more of the show's supporting cast step into the spotlight, with episodes showcasing Apu, Skinner, Flanders amongst others, including two Mr. Burns-centric episodes (in fact, you could call this the "Mr. Burns season"; he also features heavily in two additional episodes). And if you thought season four was packed with classics, you haven't seen anything yet. Expect an inordinate amount of four and five Jebediah Springfield heads as we work our way through this season.

This episode kicks things off on a strong note, returning to what had already become a go-to trope for the show, the flashback episode, but focusing for the first time on something other than a big family milestone. The end result is one of the show's most parody-laden episodes yet, and one that is principally concerned with milking that parody for as many laughs as possible. What sets it apart is that ignorance of the source material doesn't make it any less funny: independent of the parody, there are still tons of character-based and additional pop culture gags throughout the episode. I watched this episodes for years without realizing just how much it was a parody of the lifespan of the Beatles, and still found it hilarious. Becoming more familiar with the Beatles (and the details of their rise and fall) as I got older, the episode became richer and more nuanced, but the core laughs were still there. That layered approach to humor, the ability of the show to be funny, satirical and satirically funny all at the same time, is what made it so successful, and, this era in particular, so well-regarded. This episode is a great example of that ability.

One of the show's all time great seasons starts off with a bang, packing in the laughs while sending up arguably the world's most famous band.
Newer Post Older Post Home
Posted by Austin Gorton at 11:00 AM