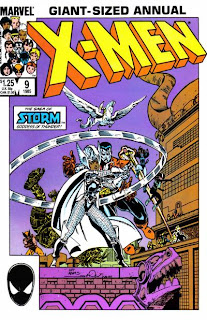 In a Nutshell
The combined X-Men and New Mutants take on Loki.

Plot
Late at night, the X-Men are awoken by Kitty screaming. Reading her mind, Rachel realizes she is receiving a psychic message from Illyana, depicting Storm and the New Mutants in Asgard, in danger. Using Arkon's thunderbolts, the X-Men promptly depart for Asgard. In Asgard, Amara struggles to hang onto her humanity as she and Sam help Eitri forge a new hammer for Storm. They plan to rescue Storm when delivering the weapon to Loki. The X-Men arrive in Asgard and immediately help save the Wolf Prince from a group of trolls. Meanwhile, the New Mutants are working out of the Enchantress' fortress as Warlock scouts the city. He is attacked by Loki and sent crashing to the ground, prompting Dani, Doug and Roberto to rush to his aid. Back in the forest, the Wolf Prince corroborates Kitty's vision, and Cyclops divides the team, sending Wolverine, Shadowcat and Phoenix to scout the city while the rest remain with the prince until he's fit to travel.

Dani, Doug and Roberto reach the injured Warlock, but he freaks out at the site of Dani and runs off with Doug. Elsewhere, the recovered Wolf Prince leads the X-Men to the Enchantress' fortress, where they're reunited with Karma, Rahne and Illyana. Suddenly, Loki appears and, with the help of Illyana, corrupted by the Enchantress' dark magic, captures the group. On the outskirts of the city, Doug willingly offers up part of his life energy to revive Warlock, while Wolverine, Shadowcat and Phoenix reunite with a just-arrived Sam and Amara. Phoenix then contacts Dani and Roberto, bringing them into their group, which is just then attacked by Loki's forces. They're saved by the timely arrive of Warlock and Doug, but not before Wolverine is grievously poisoned. The group splits up, with half going to confront Loki and rescue Storm while the rest try to free their remaining teammates. As Sam, Shadowcat and Rahne help their teammates escape Loki's dungeon, the rest of the heroes attempt to disrupt Loki's ceremony. 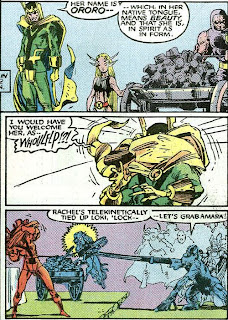 However, Storm, still under the sway of Loki, claims the hammer he had created for her, restoring her powers. She attacks her friends, believing them to be demons, but when she turns her powers on Wolverine, she regains her senses. When Hela arrives to claim Wolverine's soul, she's attacked by Storm and Dani, which prompts Dani's fellow Valkyrie to join the fray as well. They, together with the combined New Mutants and X-Men, are able to fight off Hela. With his hold on Storm broken, the X-Men reach an agreement with Loki: he will send them back to Earth and revoke his vendetta, in exchange for the mutants keeping quiet about his plot claim the throne of Asgard for himself. He agrees, on the condition that all the mutants return home, and that any knowledge or enchanted items they acquired in Asgard will be left behind. After the mutants depart, Loki sulks, before telling himself that, as an immortal, he has plenty of time to scheme anew.

Firsts and Other Notables
Though Rachel claimed the mantle and power of Phoenix in issue #199, none of the other X-Men were as yet aware of that, and she reveals the name and a new Phoenix-inspired costume in this issue, much to the consternation of the X-Men. 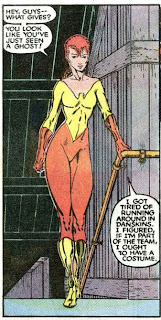 As a result of becoming a Valkyrie, in this issue Dani first begins to see an image of death above people who are close to dying or fated to die soon. This ability, like Brightwind, will remain with her when she returns to Earth, adding another element to an already crowded character profile (she is currently a Native American mutant with a flying horse and the ability to see death around people, and we're not done yet). 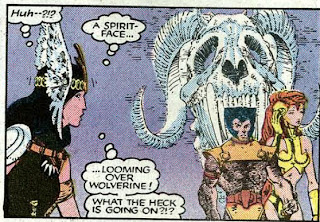 Between issue #199 and this one, Madelyne has joined Cyclops at the mansion, and the birth of their baby is imminent. As the X-Men leave for Asgard, Madelyne has an inexplicable feeling that she may never see Cyclops again, or that they'll never again be happy together. While there is no in-story rationale for her to have that feeling, this is likely a bit commentary on Claremont's part, and/or an attempt to setup the events of X-Factor #1, which will go on sale a month after this issue (and thus, Claremont was likely privy to the details of that issue and the initial overall direction of the title while working on this issue), as Maddy's premonition will ultimately prove to be accurate, as she and Scott more or less won't be happy together ever again.

The cover of this issue is an homage to Journey into Mystery #83, the first appearance of Thor.

One of this issue's three inkers is Mike Mignola, who, amongst other things, created Hellboy.

A Work in Progress
Like the story itself, the corner cover box is crammed full with both the X-Men and New Mutants. 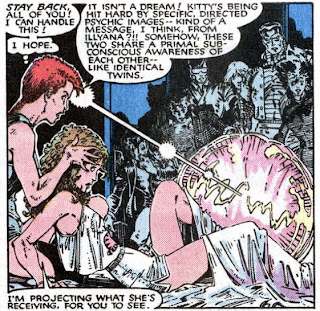 Xavier is said to be in England during this issue, presumably preparing for Magneto's trial, which will occur in issue #200.

Colossus is also wearing a new costume in this issue, though I don't believe it's ever seen outside of this one appearance.

Cyclops uses the thunderbolts acquired from Arkon in X-Men Annual #3 to transport the X-Men to Asgard. 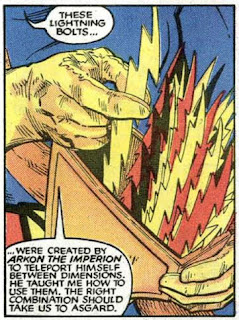 Doug and Warlock physically merge together for the first time in this issue, the former offering up a portion of his life energy to revive the later. Repeated instances of this in the future will have a significant effect on the characters even further down the road. 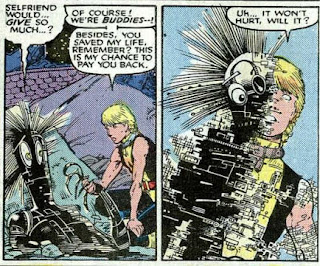 Cyclops admonishes Loki for attacking the X-Men and breaking his word, but he feigns innocence, as Illyana, her dark side brought to the fore by her study of the Enchantress' dark magic, is technically responsible for imprisoning the X-Men.

For the first (and I believe only) time we see that Rogue is able to absorb the abilities of someone being touched by someone she is touching. The ratio of time Rogue touches someone to the amount of time she gets that person's powers is also established as being one second to one minute. 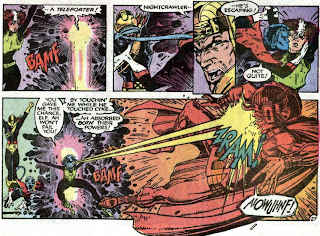 Kitty gives Rahne a pep talk along the lines of "with great power comes great responsibility". 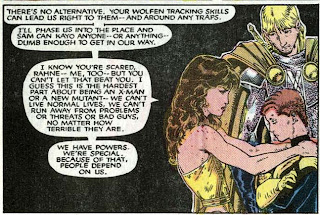 When Roberto reiterates his desire to stay in Asgard where mutants are hailed as heroes, Wolverine gives him a stern talking to, essentially telling him to grow up. 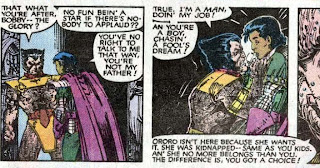 This apparently inspires Bobby, as he later proudly boasts during battle that he and his friends are from Xavier's School for Gifted Youngsters, punctuating his declaration with a "bub".

At the end of the issue, its revealed that Karnilla, the Norn Queen (one of Thor's recurring villains) is responsible for helping the X-Men defeat Loki, having sent Kitty the vision through Illyana that led the X-Men to Asgard, in order prevent him from claiming power for himself. 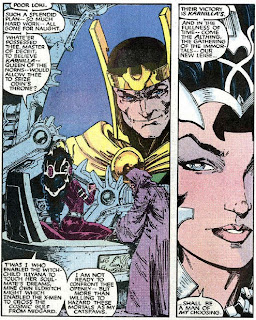 After Loki agrees to return the X-Men and New Mutants to Earth, he do so on the condition that whatever changes they experienced will be undone, and whatever magical items they've acquired will be rendered normal. The two exceptions are Brightwind, who is allowed to return to Earth with Dani on threat of the Valkyrior, who say that the bond between horse and rider cannot be broken, and Karma's weight loss, as Loki convientantly claims even he is not so cruel as to restore her to that state. 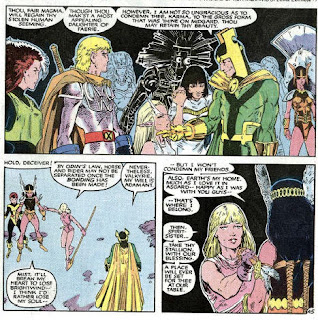 He also somewhat pointedly declares that he is returning the X-Men "to their mentor's side".

I Love the 80s
Warlock flies in to the rescue as the starship Enterprise at one point. 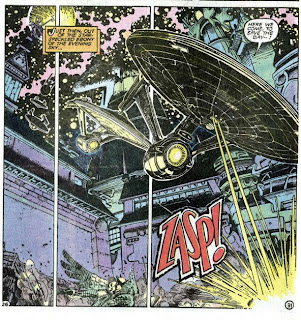 Later, he disguises himself as Hagar the Horrible. 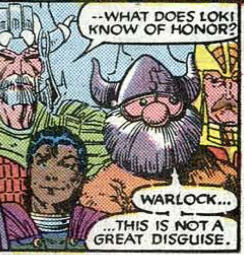 Like a Phoenix from the Ashes
Hela greets Rachel fondly, and speaks highly of her mother. 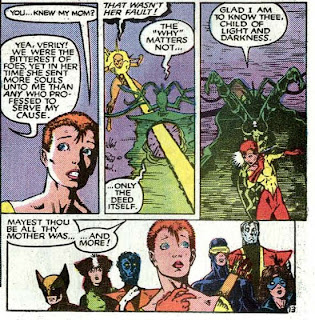 Young Love
Due to Loki's decree that all the X-Men and New Mutants must stay in Asgard or leave together, Rahne and the Wolf Prince are forced to say goodbye, Rahne, despite her love for him, being unwilling to force her friends to stay in Asgard. 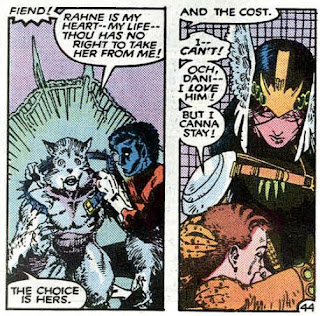 Teebore's Take
This issue picks up right where New Mutants Special Edition #1 left off, both in terms of the story and the level of craft involved. Once again, Adams knocks it out of the park. With most of the setup established in the previous issue and less of a focus on characterization (as Claremont is now also handling the more well-established X-Men characters), much of this issue is handed over to action as the combined mutant teams work together to defeat Loki and save Storm (and to Claremont's credit, this really does feel like a true continuation of the previous issue: the New Mutants remain front-and-center, and highly active, in the proceedings). Adams rises to the occasion, turning out one energetic and sweeping action scene after another, featuring, at times, dozens of characters at once.

The end result is, frankly, the best (and, really, only good) X-Men annual yet. But moreover, it completes one of the most fun and well crafted X-Men stories yet. Strong characterization (such as Wolverine and Kitty's respective pep talks), a shrewd use of the shared universe (nothing here requires an intimate knowledge of contemporaneous Thor stories, but if you're in the know, it adds to things), exciting action (the melee in the Hall of Heroes is particularly fun), rousing moments (Storm claims Thor's hammer! The X-Men fight Hela for Wolverine's soul!) and gorgeous art. Simply put, this is a fantastic example of good old fashioned comic book fun. It's not the most thematically significant story, nor one which features a watershed moment in the X-Men narrative, but it is nevertheless a highlight of Claremont's tenure.

Next Issue
The trial of Magneto takes center stage in Uncanny X-Men #200, while New Mutants #35 features the New Mutants returning to the school and finding out that things have changed.
Newer Post Older Post Home
Posted by Austin Gorton at 8:00 AM