Still behind on Revolution, as Dr. Bitz says the one I missed is worth watching. So I'll check that out online, but in the meantime, here's some thoughts on stuff on I did watch. 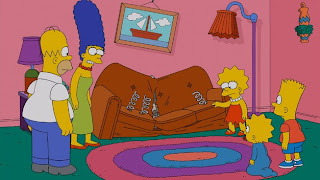 I don't like to play this card too often, because New Simpsons is what it is and if you're still watching it you know what to expect, but man, did this episode feel like it had more recycled plot elements than usual. The destruction and replacement of the couch, a plague shipped in via mail order, a crisis of faith for Reverend Lovejoy, etc. It wasn't a bad episode, necessarily, but it felt especially unoriginal.

Other Thoughts
One of the more original highlights was Ned immediately turning Bart and himself in for plotting against Homer, and then Bart's discussion with Milhouse about bailing him out. 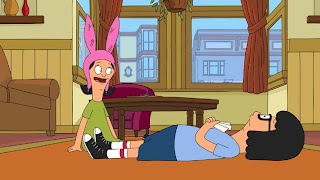 We can now put "Louise freaking out over a boy" on the list of comedy gold. The best part about this episode though, was the way it had Louise behaving uncharacteristically (freaking out over a boy) but doing so in a way completely in character (wanting to express her feelings via slapping).

Other Thoughts
The subplot was also pretty strong, mainly for the random bizarreness of Gene's proficiency for tablesettingscaping, and the way it brought out Bob's always-a-pleasure-to-see competitive side.

Tina: I’m no hero. I put my bra on one boob at a time like everyone else. 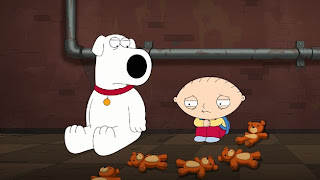 The main plot, involving Lois usurping Peter's place in his group of friends, had some good laughs along the way but ended with some really uncomfortable gender politics that I'm not even going to get into (if the show can't be bothered to address this stuff neither will I; let's just say the ending was ridiculously outdated to the point where I almost wondered if that was the joke, except it wasn't). The B plot played more like a watered down "Road To..." episode, but got the job done, with some particularly strong gags at the end (like Brian trying to hit the stop button with a Nerf gun). 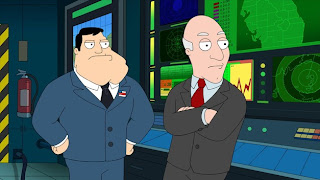 You simply can't go wrong setting Stan off on a whacky series of adventures with Patrick Stewart, especially if they involve visits to the Kevin Costner compound and dog costumes. The B plot, meanwhile, featured one of the better "revenge over a petty slight" Roger plots in awhile, featuring the return of Stelios Kontos and his awesome theme song.


Once Upon a Time: The Evil Queen 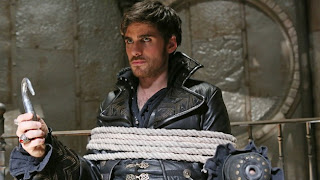 I'm not sure which is more ridiculous: that Fairyback Regina could honestly say Snow is the villain, not her, moments after slaughtering an entire village of people, or Storybrooke Regina possibly thinking Henry would be willing to go along with the death of everyone in town in order to go back to the Enchanted Forest with her. I know I've harped on this to no end, but with so much of this season's final arc tied to Regina, it's a shame the character is so inconsistently written, being as dumb or clever or evil or not as the plot demands.

Other Thoughts
Another largely superfluous fairyback (this was, what, the story of how Regina accepted the "Evil Queen" moniker? We're not too far removed from "how Regina picked out that one outfit" or "how Jack got his tattoos" territory at this point), though it's always fun to see Snow in butt kicking mode, and establishing that Rumpelstiltskin asked Regina to cut off trade with King George was a nice touch (it all ties in with Rumpelstiltskin's overall plan to harness the love of Snow and Charming or whatever).

Speaking of which, Snow mentioned being taught survival skills by someone in another forest; I'm guessing that's setup for a future Snow/Robin Hood fairyback.

It's a shame that Owen grew up to be this Greg guy, who's now not even all that interested in finding his dad after all. Also, we'll see how it all plays out, but on the surface, this whole "using science to stop magic" business smacks of The Initiative from season 4 of Buffy, and frankly, a bracelet that somehow uses "science" to block Regina's powers is pretty much just magic by another name.

I wonder how many times Regina has done that mindwipe trick on Henry?

Neal recognizing Henry's attempt to warn Emma about his arrival because he taught Emma that trick was pretty funny.


How I Met Your Mother: The Bro Mitzvah 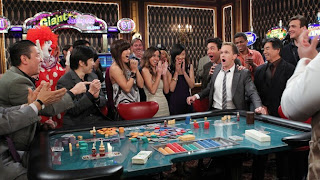 You win this round, show. From the very beginning of this episode, everything felt ridiculously forced. The catering deposit being in cash, the boys grabbing Barney the same night he was supposed to have dinner with Robin and his mom (like they wouldn't have cleared it with Robin?), the increasingly lame bachelor party that Ted and Marshall had to know wasn't up to Barney's standards, etc. Because this show has shown itself, of late, to be capable of churning out an episode this bad, I bought it all, hook, line and sinker. I figured this was just going to be another example of how the Barney/Robin relationship just doesn't work no matter how hard the show tries to sell it. But in the end, it turned out everything feeling forced was because it was forced, a long con pulled not only on Barney, but the audience, and the end result was one of the season's better episodes, as well as a worthy bachelor party for Barney. Bravo.

Other Thoughts
Revealing the clown to be Billy Zabka was an absolutely perfect ending. Also, it was impressive how quickly he got that clown makeup off. Ralph Macchio was also a delight.

Barney: The students have become the intermediate students. 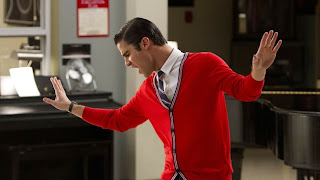 In the real world, the notion of a teacher working through his issues with a former student who kissed his fiancee being worked out via song would be patently ridiculous, but it makes a weird kind of sense in the world of Glee, and forms the inspiration for a decent episode built around feuds. Granted, most of those feuds sprang up whole cloth for the sake of this episode (the Unique/Ryder business, and the subsequent bonding of the New New Directions, would have been a lot more effective if we'd ever seen Ryder and Unique interact with each other prior to this episode), but never let it be said that there isn't a theme Glee can't contort itself into using, and in this instance, it helps the episode rise above by giving it a thematic spine on which to hang its plot developments.

Other Thoughts
The episode also helped that, in several cases, the musical feuding didn't help resolve the issues at hand, one of the few times the show has avoided its "music solves all problems" aesthetic.

The whole "Ryder talking to a girl online" was an interesting narrative device (particularly keeping the identity of the girl he was talking to a secret), though I'm dubious about the whole "freak out over meeting him" ending, wonderfully shot and fraught with oddly mounting fear though it was.

As for the Finn/Brody confrontation, I was with Finn all the way through his coolly-detached and slightly-menacing declaration to Brody to stay away from Rachel, but the ensuing brawl was disappointing while his manic, almost-childlike cry of "stay away from my future wife!" pretty much wiped out all the credibility and good feelings I had about the Finn/Rachel relationship since their talk at Will's Not Wedding.

Even before Blaine revealed joining the Cheerios was his plan all along, I found myself wondering why he was resisting joining so hard in the first place. I mean, Sue can be a bitch, but she does win championships and was offering to make him a co-captain. Being the co-captain of a national championship cheerleading team would probably be a pretty sweet thing to put on a college resume, even for the presumably arts-based schools to which Blaine would apply.

I still can't believe no one is calling Kitty on her BS.

Even though there's no way this show is going to send Finn off to college for four years to become a teacher (unless there's a musical teaching school out there somewhere...), it was still good to hear someone point out the obvious to him. Having Marley be the one to give him the pep talk also took advantage of the show's history in a way it often fails to do.

Only in the world of Glee: would someone who is essentially a volunteer student teacher with no college credit or formal licensure receive enough of an office that there would be something worth packing up when he left that school. Also, I'm pretty sure Finn teleported from Lima to New York in order to confront Brody.

Favorite Song: Much as the old boy band feud brings me back to high school, the "The Bitch is Back/Dress You Up" mash-up had the most energy of the various mash-ups and paired nicely with each other. 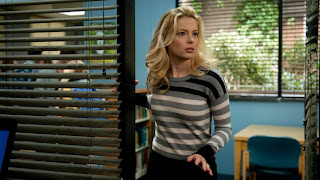 This is one of those episodes that makes me frustrated with the self-imposed limitations I've placed on these posts, as it was the first episode of the season to really make me feel like there was a lot of material to unpack, what with all the metatextual, fourth wall-breaking antics from Abed and commentary of his growth as a character/person. But instead of devoting the time and energy to doing that unpacking, I'll instead just say that the metatextual, fourth wall-breaking antics were humorous and I appreciated seeing Abed grow a little as character even while that growth was being acknowledged by other characters and factored into the plot.

Other Thoughts
This was another strong episode for Pierce (making it two in a row), as he was once again allowed to act like a normal human being without abandoning his essential Pierce-ness (and the gag about him needing to use Britta's computer because that was the one that had his email on it was fantastic).

I hope Rachel shows up again; the prospect of Abed being in a relationship with someone who is odd enough to get him but more than just a female Abed clone is intriguing, and I liked the way Rachel was played in general.

Pierce: I need to get to my email. The post office is about to close.


Parks and Recreation: Jerry's Retirement
It makes sense, given that the show is ultimately about her, but I was genuinely surprised at how much an episode entitled "Jerry's Retirement" was really about Leslie realizing there's more to life worth celebrating than professional accomplishments. Granted, Jerry still got a fair amount of the spotlight, especially for a third tier supporting character, including an extended look at his marvelous home life (and the ongoing gag about how that life is absolutely perfect continues to kill), but I was still surprised at just how much of Leslie episode this was.
Newer Post Older Post Home
Posted by Austin Gorton at 1:00 PM