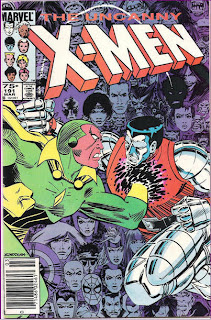 In a Nutshell
The transformed X-Men and Avengers attempt to overthrow Kulan Gath.

Plot
Kulan Gath tortures the captive Spider-Man, telling him the blood of innocents will provide the power to spread his spell over the entire planet. He then sends the New Mutants and Morlocks out in search of the rebels. The rebels arrive at what was once the New York Public library, seeking weapons and knowledge to use against Kulan Gath. Just then, they're attacked by Gath's soldiers. Rogue is killed, while Storm is rescued by Warlock. As the remaining rebels head towards Kulan Gath's temple via the Morlock tunnels, Warlock attempts to help Storm remember the real world. That evening, the rebels sneak into Gath's temple, but are discovered. They fight their way into Gath's throne room, both sides taking heavy losses. Watching the melee, Spider-Man summons the strength to break free, intent of stopping Gath once and for all, but is quickly killed by the wizard. Above, Storm and Warlock arrive at the temple, and Warlock is able to make Storm understand that Gath's amulet is the source of his power. Warlock becomes a pair of wings, and together they swoop down, snatching the amulet away. 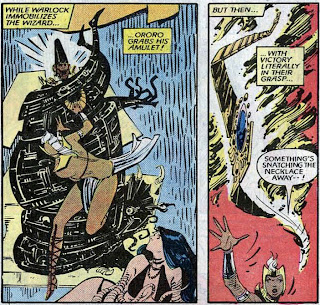 Just then, Amara snares the amulet from them, revealing herself to be Selene in disguise, while the captured Selene turns into Amara. Selene declares her intention to cast Gath's spell over the world and rule it herself. Amara, controlled by Selene, triggers a volcano which destroys Kulan Gath and injures Storm and Warlock. Storm asks the alien to transform her into a techno-organic being. She then infects Selene in turn, and proceeds to drain her of her life energy. With both Gath and Selene destroyed, Dr. Strange is freed, but the city and everyone within it remains transformed. Dr. Strange combines his abilities with Illyana's power to cast a spell that turns time back and prevents Gath from escaping his amulet prison. However, Strange is unaware of just how Gath's release is prevented, and Storm worries that perhaps they've delivered the world to a worse fate. Elsewhere, an advanced robot named Nimrod appears behind Jamie Rodriguez as a result of Strange's spell, and destroys the mugger about to attack Jamie. Startled, Jamie drops Kulan Gath's amulet, and it disappears into the mud, preventing Kulan Gath from escaping. Nimrod, realizing he's arrived at a place and time where mutants exist, declares he must therefore follow his prime programming: destroy all mutants.

Firsts and Other Notables
Nimrod makes his first appearance, pulled into the present day as a result of Dr. Strange's spell. Though it's not made clear yet, Nimrod is an advanced Sentinel which hails from Rachel's timeline. He possesses the ability to adapt to different mutants' powers as it encounters them, as well as the ability to look and speak like a regular human. It will eventually be revealed that he followed Rachel back in time, and that Dr. Strange's spell merely put him in a position to prevent the release of Kulan Gath, and isn't responsible for Nimrod's presence in the present day. He'll pop up occasionally in the next twenty odd issues after which his appearances become much more sparse, but he remains a significant part of the X-Men mythos (including, after a fashion, as the main villain of the "Second Coming" crossover event). 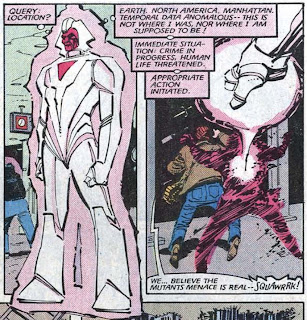 Upon arriving in the present day, Nimrod saves the life of dock worker Jamie Rodriguez (thereby preventing the release of Kulan Gath); future issues will show Nimrod, masquerading as a human, living with Jamie and using his home as a base of operations.

Claremont continues to write Warlock as though he's used him far more in New Mutants than he ever has. Warlock mentions character traits about Storm, despite the two having never met as far as we've seen, and refers to Rahne as his best friend, despite barely interacting with her (though that could at least be chalked up to her being the first of the New Mutants to reach out to him when he came to Earth).

The spell Dr. Strange casts returns the world to the point in time just before Kulan Gath escaped from his amulet and cast his master spell, thereby returning all the characters who died in the course of the story to life (because technically, the story never happened). Only the people still alive and present in Kulan Gath's throne room when Dr. Strange cast the spell will remember the events of the story. As a result, the last few panels of issue #189, in which Jamie Rodriguez is killed and Gath is released, technically occur in the alternate reality inadvertently created by Strange's spell. 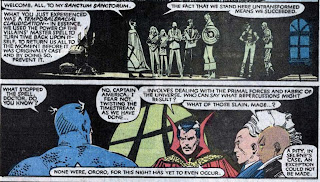 A Work in Progress
Kulan Gath's origin is helpfully provided.

The transformed Rogue is depicted last issue and this one as being made of green crystal. When she's touched in this issue, she transforms into flesh and blood and becomes vulnerable. 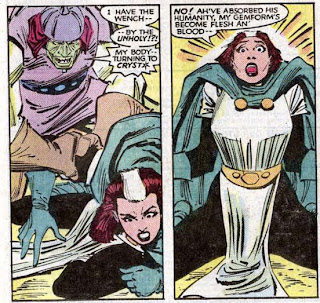 Nightcrawler teleports Sunspot multiple times as a means to drain his energy.

Dani uses her power on Callisto, and we learn her greatest fear is of the life she might have led. 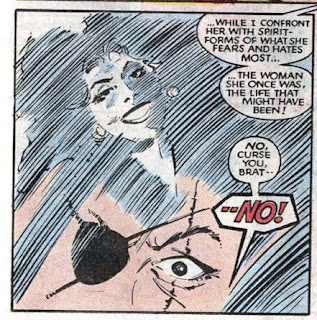 Xavier finally gets around to asking Dr. Strange about Illyana, but he insists the best help she can receive is amongst the people who know and love her. 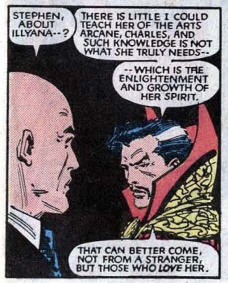 I Love the 80s
This being the 80s, most of the blood on display (and there's a fair amount of it in the issue) is black. 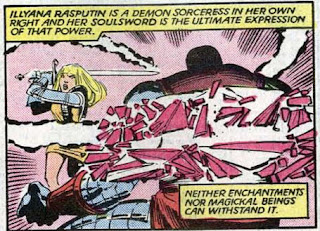 Claremont also uses the "belies" phrase twice in this issue, as well as the phrase "quarter neither asked nor given". 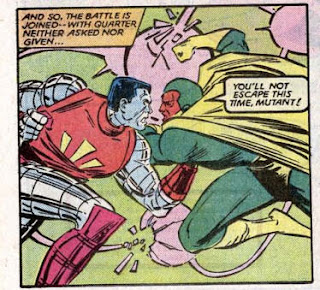 Artistic Achievements
Romita Jr. and Dan Green do a nice job with Warlock in this issue, depicting him somewhere between the crazy mass of ink he is in Sienkiewicz's hands and the more "normal" humanoid form he's given by later artists. 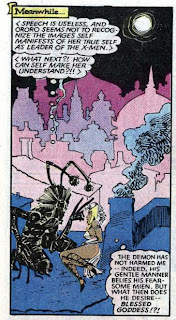 Human/Mutant Relations
Storm bemoans that once more the X-Men will have helped save the world, but the general public will have no idea what they've done, though Captain America assures her that he at least knows, and will remember. 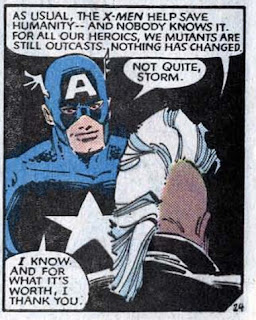 For Sale
Hey kids! Spider-Man and Power Pack are here to help you prevent sexual abuse! 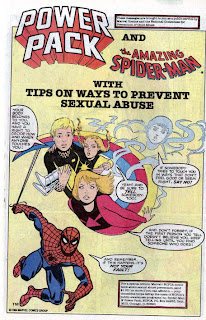 After the Marvel RPG last month, now there's an ad for an Indiana Jones RPG. 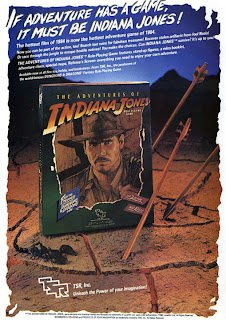 Teebore's Take
With the conclusion to this story imminent, Claremont indulges in what was, even at the time, a time honored tradition when it came to alternate reality/time travel stories: the death of series regulars who would, under normal circumstances, be relatively safe. Even though we don't know the specifics of how, we, as readers, have an expectation that things will eventually go back to normal, never moreso than when significant characters (not just in X-Men, but the Marvel Universe as a whole) start dying, but that expectation doesn't lead Claremont to pull any punches. As a result we get some genuinely brutal scenes like Callisto needlessly killing Sunder, Storm becoming techno-organic then infecting Selene and draining her life force, Vision solidifying inside Colossus, blowing him apart, and most brutal of all, the torture and eventual killing of Spider-Man as well. The result is visceral and shocking, but the more extreme things get  we can't help but think it's all the more likely these events will somehow get reversed, which keeps things from getting too dark (the relative brevity of the story also prevents Claremont from lingering too long on all the grim deaths).

Other than that, there's little to say about this story beyond what was said last issue. This issue wraps it all up (in the process introducing a new and long-lasting villain to the world of the X-Men) and the fact that Claremont is able to not only create a fully-realized alternate world but also tell a satisfying and complete story within that world in only two issues is perhaps the most retro thing of all about it.