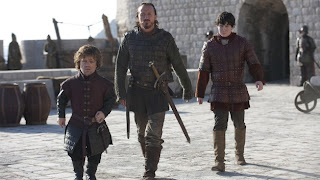 Game of Thrones is back, and going forward, I'll be giving it the full post treatment in place of the departed Walking Dead. Like my write-ups of the show within the "Last Week in TV" posts last season, I'll break down each episode by location, then give some general thoughts (when necessary) at the end. So let's get to it!

North of the Wall
Our cliffhanger from last season is rather perfunctorily resolved, as Sam essentially hides from the ice zombies until they're gone, gets attacked by another, then is rescued by Ghost and the rest of the Night's Watch, all of whom promptly decide to skedaddle on account of the, you know, ice zombies. I'm sure it'll be made clear eventually, but last season I was under the impression the White Walkers were heading toward the wall (ie where everyone else is now headed), presumably to invade the south, but apparently they were just moving from one place to another and Sam stumbled into their path?

Meanwhile, we finally met Mance Rayder, the King Beyond the Wall, and while the previous two seasons hinted at this pretty heavily, he's not quite the monster the leaders of the Night's Watch would have us believe. Ciaran Hinds is one of those "that guy" actors who I like, and I'm already intrigued by his past as a former Ranger and rise to power amongst the Wildlings.

It took me a moment to remember that Jon's actual goal is to be a double agent within Mance's camp, which is a testament to how well he sold his little spiel to Mance about why he wants to join up.

That said, we're obviously heading towards a season arc for Jon in which he finds himself torn between doing his duty and abandoning the Night's Watch for good, helped along by the saucy Ygritte.

Dragonstone
While I was pleased to see Davos turn up alive and well (had he been on that rock since the Battle of Blackwater Bay, which seems to have happened at least a few weeks ago, if not more? There was a line about him having been in prison that seemed to get glossed over; I wasn't sure if that meant just prior to this episode, or another time), things didn't end much better for him as he was hauled away after trying to kill Melisandre.

Otherwise, not much of note happened on the thoroughly-depressing Dragonstone. Stannis seems more concerned with burning heretics than claiming the throne, which is a shame.

Harrenhal
I was a little unclear who all the dead bodies were: all the people Tywin had been holding at Harrenhal before leaving for King's Landing, or some contigent of Robb's forces killed by the Mountain?

How long before Littlefinger shows up to claim Harrenhal and finds Robb's forces there?

King's Landing
Holy crap, Tywin Lannister is harsh. What's worse, he's not entirely wrong: Tyrion is a bit of a philanderer (though that's changed of late, not that it would matter to his father because Tyrion's choice of girlfriend was a whore at one point) who likes to drink, and there's a certain truth to the fact that just because Tyrion acted unexpectedly by his usual standards, that doesn't mean he should be applauded considering he was only doing what was always expected of him.

But Tyrion is trapped in a chicken-and-egg scenario, where no matter what he does, it won't be good enough, because at the end of the day, everyone blames him for the death of his mother. And even when he does something well, like display a strong aptitude for politics, his father dismisses it as a result of his "low cunning". So basically, no matter what he does, even if it does help his family, his father won't approve simply because Tyrion did it, which has to hurt most of all.

That whole scene was expertly acted, with neither Tywin nor Tyrion flying off the handle while still making their respective feelings on the matter clear.

That said, I do hope we get some sense of Tywin's feelings about Joffrey. Because even if he doesn't want to applaud Tyrion for simply acting like a typical Lannister, he can't possible think much better of Joffrey considering how he behaved during the battle. Tywin doesn't strike me as the type who would give Joffrey a pass just because he's his grandson/the king.

Legally speaking, Tyrion does have a point about being the Lannister heir (Joffrey is technically the heir, I suppose, but that would require the Lannisters confirming he's not the son of Robert Baratheon, which would make his hold on the throne even more tenuous). I wonder if there's any kind of court in Westeros where Tyrion could lodge a formal complaint?

I'm not sure yet if I'm supposed to (it's unclear how much her actions are genuine and how much they're simply a means to an end), but I like Margaery. On the surface, at least, she seems to have a pretty good head for leadership and an ability to ably play the game, which counts for a lot on this show.

While it certainly doesn't excuse his vast swath of dickery thus far, I can't help but be amused by Joffrey getting cockblocked by his mom, as well as Cersei's clear disdain for Margaery and the fact that her son is more enamored of her than Cersei.

So did Sansa get hit with the puberty stick between seasons or what? Not that its a bad or unexpected thing, but I was taken aback at how tall she'd gotten. Maybe one of those ships will take her to join the WNBA.

Littlefinger's interest in her remains creepy, and I'm glad Roz at least made a point of it to Shae (not that I expect good things for Shae, either). The scene between Roz and Shae overall was strong.

Astapor
After one final "give me back my dragons!" in the Previously On segment that had to be a wink to the audience, Dany has thankfully left Qarth behind in search of an army to back up her ambitions and dragons. The idea of the slave army and the moral quandary it suggests is intriguing (frankly, I was half expecting Dany to summon up a dragon or two to roast the slaver just because she was outraged by him), though I do wonder how the option of buying the army is even available to her, considering Xaro Xaro Ducksauce's vault was empty last season.

Jorah did have a good point that should Dany buy the army, she would at least treat them better than many other buyers would.

I was also excited by the return of Barristan Selmy (this might have been fueled by my having just read the chapter where he was dismissed by Joffrey in the first book the night before), and hope that at some point we might see him back up all the claims about what a great swordfighter he is.

I'm not sure if it's intentional or not, or if she'll stay on this same track, but I'm continuing to think that Dany might be the best candidate for ruler of Westeros. She seems to have just the right balance of skill and empathy to do the job well.

Other Thoughts
No Arya, Bran, Theon or Jamie/Brienne this episode.

The opening credits, which are pretty much the best on TV right now, were updated to include a burnt out Winterfell and Astapor.

This is a show that will always be relatively fragmented (the focused "Blackwater" from last season the occasional exception) but this one didn't feel too jumbled, especially for a premiere. It helped that the cutting back and forth between locations largely occurred in the second half, and was then limited mostly to going from Kings Landing to somewhere else.

In case you were worried, the show was renewed for a fourth season today, and the season premiered to new highs in the ratings.
Newer Post Older Post Home
Posted by Austin Gorton at 2:30 PM