Game of Thrones 3x04: And Now His Watch Is Ended 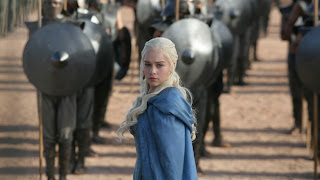 I'll say this for the episode: shit is going down. Both Dany's big move and the virtual destruction of the Night's Watch felt like things that could have ended each of their storylines for a season (that is, I could have seen a season unfolding in which those two events were the culmination of both threads' season long arcs, and the last thing we saw of those threads before going into a break). Yet we're only in the fourth episode, which makes me even more excited for what's coming.

North of the Wall
Well, I suppose that's what happens when you're forced to stock your under-funded monastic order with criminals, degenerates, and unwanted sons of lords. And here I was just starting to think "all this Night's Watch stuff is starting to get terribly boring", moments before all hell broke loose. Of all the places I was expecting this storyline to go, this wasn't it.

I guess Jon won't be faced with as much of a moral dilemma as expected when he reaches the Wall in the company of the Wildlings, considering Mormont was pretty much Jon's strongest tie to the Watch (well, aside from Sam, but there's no reason he couldn't join up with the Wildlings at this point, or just go his own way, assuming he and Gilly survive that long) so even if some element of the Watch makes it back to the castle and tries to set up shop, it wouldn't be too hard for Jon to look at them and see that the Wildlings are the better horse to back.

As much as I wanted Crastor to bite it, I'm sad that Mormont had to go as well.

On the Road
Jamie is smarting from losing his hand, and the show continues to effectively build sympathy for him by having him be essentially bullied by Locke and his men, and then having him receive a "tough love" speech from Brienne, pointing out that what's happening to him isn't all that worse than what's happened to plenty of non-nobles the world over.

We also learned Jamie was in fact lying about the genesis of the Sapphire Isles' name, meaning Locke is either ignorant or doesn't care. Either way, it appears that they're continuing to at least treat Brienne better than Jamie.

Even starved and left-handed, it was impressive how well Jamie held his own against Locke's men.

Just a brief scene with Bran this week. He tried to catch his dream avatar (or whatever) but got interrupted by a vision of his mother.

The Secret Headquarters of the Brotherhood Without Banners
We met Beric Dondarrion (well, technically, he appeared briefly in the first season, but this is our first chance to really get to know him) and learn that he and his followers (remnants of Stark and Baratheon men) are worshippers of the same "one true god" as Melisandre. Last season I liked Stannis because he was actually doing something active to usurp Joffrey and claim his title, but he and Melisandre definitely came off as religious zealots, which painted their god in a negative light. But this group seems more down to earth and compassionate, which makes for an interesting contrast with what we've been told is happening on Dragonstone to "heretics", while also making the proceedings somewhat ominous for Arya and Gendry despite their apparent relative safety.

I was worried Beric was going to make Arya participate in the Hound's trial by combat. The Hound continues to be an intriguing character, for being so reprehensible yet still possessing his own code of honor, however twisted it may be.

Kings Landing
It's good to know Tywin is an equal-opportunity dick, cutting down Cersei just as effectively as he previously had Tyrion (though, of course, it's much more fun to see him doing it to Cersei). I, for one, can't wait to see Tywin try and reign in Joffrey (it's something I've wanted to see since his arrival at Kings Landing last season), and hope he's at least marginally successful.

Margaery, meanwhile, is doing a masterful job of manipulating the little sociopath, and though her true intentions remain an unsettling mystery, it's still fun to watch.

The way Jack Gleason played Joffrey's little moment of "what is this hu-mon emotion?" as he waved to the crowd was hilarious.

Varys has been quiet most of this season, but the always enchanting Eunuch was back in a big way, as we learned his secret origin in a story with, I suspect, big implications on the future of the show (just in terms of the lesson it taught Tyrion).

Also, his genuine concern for Sansa is as touching as his comments about Littlefinger were troubling (and, based on what we've seen, accurate).

Wherever The Hell Theon Is Again
So I'm assuming that this whole "your sister sent me to rescue you" ruse was the Westeros version of good cop/bad cop? That is, whoever this group is captured Theon, tortured him, then pretended to release him in the hopes that while released, he'd reveal something he wouldn't have under torture. And given his confession in the tunnel, along with his apparent savior citing the Stark family motto, I'm starting to think this group is loyal to the Starks, and that perhaps Theon's men handed him over following their flight from Winterfell last season.

Assuming this was all just an elaborate ruse, you do have to wonder if those guys who tried to recapture Theon, then got killed, were in on it.

It took groping his sister, the ill-advised sacking of Winterfell, the death of two innocent boys, losing control of the city, elaborate torture and a near-rape, but Theon has finally realized that Ned was his true father, and that he never should have sided with Balon against Robb.

The Smoking Remnants of Astapor
What went down with Dany and the slaver wasn't exactly shocking; we'd all speculated, pretty much beat for beat, exactly what happened (all the while, I'm sure, book readers looked on, rolling their eyes). But that didn't make it any less exciting to watch Dany reveal she'd understood the slaver all along, order her army to purge the city of its slavers (while sparring the women and children) and command her dragon to roast the uppity slaver alive before burning the city to the ground. Despite everything playing out pretty much exactly how we'd suspected it would, it was still easily one of the show's biggest "f%@* yeah!" moments yet.

That sequence also did a marvelous job of cementing Dany as one of my favorite characters on the show, something that's more or less been accomplished in the span of three episodes. Not only has she become more fun to watch, but she's definitely taken a commanding lead in the "most worthy to rule" category, making it clear that she's willing to fight not only to reclaim her throne but to smite out injustice as well.

Other Thoughts
No Robb or Jon this week.

So Pod apparently has a large wang? I guess that answers that question, though I still wonder what the point of all that was.

Lady Olenna remains a delight. And Sansa, don't get too excited; even if this proposed wedding actually comes to pass, your marriage to Loras will be entirely ceremonial, I assure you.