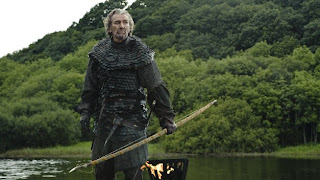 On the Road
It's a testament to how far Jamie has come (especially with such limited amount of screen time) that him getting his hand chopped off wasn't more of a cheer-worthy moment. It certainly helps that it followed him using the one asset left available (his quick tongue) to save Brienne from being raped, presumably for no personal gain, but considering his first significant act on the show was casually pushing Bran to his intended death, it's a crafty (and effective) bit of storytelling that Jamie losing a hand (and thus, the one thing he genuinely earned on his own, his sword fighting skills) felt more like a tragedy for the character than a necessary comeuppance.

My thought process throughout that sequence, after Jamie was laid out on the rock: They're going to cut off his hand, aren't they? No, maybe they're going to cut out his eye instead. Nope, guess they aren't going to do any - HOLY CRAP THEY JUST CUT OFF HIS HAND!

Whether Jamie deserved it or not, that was a pretty great moment on which to end an episode.

It is not Roose Bolton who has captured Jamie, as I thought last week. The internet tells me it is someone named Locke (no one had better tell him what he can't do).

Arya's plot this week was pretty much just a placeholder, keeping her in the company of the Brotherhood Without Banners but moving on from the inn (and bidding goodbye to Hot Pie). I'm glad the revelation of her true identity didn't lead to anything nefarious (at least immediately), even if her freedom to move about is somewhat limited.

Also, I believe the inn at which they were staying was the one at which the king's entourage stopped after leaving Winterfell early in season one, the place where Sansa's dire wolf was killed and the Hound returned with the body of the butcher's boy who had been Arya's friend, all of which followed the encounter between Arya and Joffrey in which the little shit made a big stink out of everything because Arya basically kicked his ass. Which is what Arya was asking the Hound if he remembered in this episode.

North of the Wall
Like Arya, Jon's story this week was pretty much a placeholder/setup, as he's sent with a group of Wildlings to prepare for an attack on the Wall/Castle Black. But the true battle will be one of Jon's loyalties...

Meanwhile, the remnants of the Night's Watch return to Crastor's home, where Gilly (the daughter of Crastor on whom Sam is sweet) is giving birth (giving us some sense of how much time has passed since the Night's Watch left Crastor's last season - she was pretty far along then, so it hasn't been that long). I seriously hope Crastor gets taken out, gruesomely, and soon.

Dragonstone
Even less of note here. Melisandre is leaving for vague reasons, Stannis isn't happy about it and wants to breed another smoke monster to kill Joffrey but is having some erectile dysfunction. I did appreciate the explanation for why Melisandre hasn't just conceived another smoke monster. The answer is pretty much just "because magic", but that's okay, since she's one of the shows few explicitly magical characters.

Riverrun
The sequence in which the archer (Catelyn's brother/Robb's uncle, Edmure, if I recall the first book correctly) couldn't hit Catelyn's father to start the funeral pyre was freaking hilarious.

King's Landing
Nice to know that Tyrion won't have to spend the entire season hiding in his chambers from his family, and has been given a new task by his father. While it seems that Tywin is setting him up to fail, I expect that Tyrion will ultimately succeed by anyone's standards except his father's.

The "musical chairs" sequence at the Small Council meeting was also hilarious.

Enjoy your return to the Eyrie, Baelish. Lysa Arryn was already batshit insane the last time we saw her, and that was over a season ago, so I'm sure everything will go wonderfully for you.

More seriously, I'm surprised we haven't (yet) seen more of a reaction from Baelish over being sent out of King's Landing (and away from his whore house). Maybe he's just too scared to cross Tywin?

Just what was it that Pod did to make the whores refuse to take Tyrion's money? More importantly, is this the beginning of a storyline, or just a one-off joke (I don't really care either way, I'm just not sure how seriously to take it)?

Astapor
Daenry's story continues to move in drips and drabs (last time, she looked at something she might want to buy, this time she bought it), but the newfound assertiveness and confidence with which she does things is entertaining to watch, and though slow moving, things seem to be heading in a specific direction, as opposed to the aimlessness which characterized most of her plot last season.

Also, I'm fairly confidant she has no intention of giving up one of her dragons, and that she'll eventually be leaving Astapor with both the slave army and all three dragons.

The discussion between Dany, Jorah and Barristan about the nature of war was also telling. The men are right that it is difficult, if not impossible, to conduct a war that spares innocents, but the fact that Dany at least wants to keep the number of innocent deaths at a minimum is telling.

Wherever The Hell Theon Is aka Not The Iron Islands aka The Back of a Volkswagon
Not much to note here: Theon escaped, was pursued, almost got raped (lots of attempted rape in this episode), then was saved by someone quoting the Stark family motto.

Other Thoughts
No Joffrey, Margery or Sansa in Kings Landing this week, nor any Bran/the Reeds out on the road.

Riverrun was added to the opening credits.
Newer Post Older Post Home
Posted by Austin Gorton at 8:00 AM