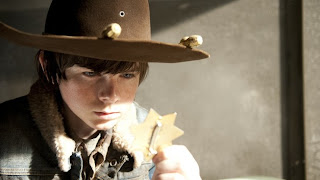 “In this life now, you kill or you die. Or you die and you kill.”

So says the Governor, and really, for the vast majority of its three seasons, so, seemingly, said the show itself. By the end of this finale that didn't quite feel like a finale, though, perhaps the show, through Rick, is finally repudiating that mentality, and suggesting a different way to live. As a result, this episode, while coming up short in terms of satisfactorily closing off the conflict between the prison and Woobury, was largely successful thematically.

It addressed the question of whether or not Rick would end up like the Governor/what kind of leader he'd be in the world of the zombie 'poc while setting up a new character conflict for next season (will Carl instead embrace the Govenor's philosophy?). Plot-wise, it resolved the immediate conflict between the prison and the Woobury, but by leaving the Governor free to return another day, his transformation into an out-and-out supervillain thus complete, it ended the season on a whimper instead of a bang.

The decision to show the assault on the prison entirely from the point of view of the Governor and his assault force was an interesting one. Frankly, I bought entirely the feint at the beginning that Rick and company were pulling out completely (it seems like the kind of thing this show would do), so the fact that there was any kind of fight at all was a pleasant surprise. That said, Rick's plan seemed poorly thought out, in part because we only saw it from the perspective of the assault force, passing up plenty of opportunities to wipe out the Governor's forces easily (like locking them in any one of the dozen self contained chambers they penetrated or disabling their vehicles while they were inside). In the end, it seemed like the plan was little more than "scare everyone out of the prison, then have Glenn and Maggie shoot at them until they leave". Which, in terms of guerrilla/scare tactics on a force comprised largely of ordinary folk and not hardened soldiers, is probably effective enough, but at the same time, isn't all that exciting.

In the end, it was unclear whether the more restrained counterattack was intended as a statement on Rick's (relatively) kinder, gentler attitude, or merely a failing of direction. Given that Rick did lead a small contingent back to Woodbury with the purpose of finishing things once and fall, it would seem the latter is to blame (they probably could have finished things once and for all without ever leaving the prison). But that kinder, gentler Rick brought the show to a conclusion that, thematically, I feared it would never reach, with Rick realizing he can't just shoot first, can't treat everyone like an enemy, that people need each other not only to survive, but to live. Last episode, he abolished the Ricktatorship, and this week he welcomed the women and children of Woodbury (as well as Tyreese and the woman who's always with him whose name I don't know...Sasha, the internet tells me) to the prison.

Given where the characters found themselves at the ends of the previous seasons, this season ended on arguably the biggest win ever for Rick and company (even with the Governor still out there), and after a season (or more) that seemed to suggest that the Governor's "kill or be killed" mentality was the only way to survive in this world, ending with a repudiation of that mentality, on a note of, dare I say it, optimism, was as satisfying as the confrontation between the groups was unsatisfying. Rick looking up at the end and no longer seeing a vision of Lori was a bit on the nose, but what it represented was wholly welcome, even if the ultimate conclusion of the season long narrative came up short.

Other Thoughts
In principle, the idea of the Governor being out there as a recurring antagonist isn't a bad one; this season largely succeeded because the protagonists had an adversary that wasn't just a horde of mindless zombies, and leaving the Governor out there somewhere leaves that door open. In execution, however, with so much of the season seemingly building toward a showdown between Rick and the Governor, with the Governor responsible for so many heinous things, his unresolved fate and lack of comeuppance is a bummer.

I've made very clear my frustration with Andrea throughout the season, but I'm still bummed that she died, in part because her death felt very much like a case of "this is a finale, so someone important has to die" and also because it ends once and for all any hope of the character reaching her potential. All along Andrea seemed poised to become a kick ass female character, someone willing and capable to kick butts and take names, but then she got shoved into her heinous role as Woodbury's Village Idiot for most of this season, and all that potential went unfulfilled. "Prey" seemed to suggest that if she could make it out of the season, her character could end up back on track, but this episode ended that once and for all.

Also, her death would be less frustrating if she'd just occasionally glanced at the dying/dead Milton while fishing for the pliers, instead of dramatically staring at him for long periods of time while doing nothing to help her situation. The whole sequence with her and Milton was textbook suspense film-making, and largely effective, but undercut by all those dramatic pauses that served no purpose beyond heightening tension.

That said, the moment of her actual death was nicely shot. Throughout this season, I'd have liked to have been shown, instead of told, more about the bond that had formed between Michonne and Andrea, but given that never happened, it seemed entirely appropriate that Andrea's last moments would be shared with Michonne and left unknown to the viewers, much like the rest of their relationship.

Her comment to Rick about the safety was a nice callback to one of their earliest interactions as well.

Another good bit of direction: the confrontation between Carl and that guy in the woods. It was clear that he was standing down when Carl shot him, but at the same time, he hadn't yet completely dropped his weapon (frankly, I was expecting him to blast Carl as Carl reached out to take the gun from him, another case of the show being surprising by NOT taking the most gruesome or shocking route available), adding just a touch of ambiguity to the situation.

Speaking of Carl, he sounded frighteningly like Shane when he asked Rick what was going on when Rick returned with the people left in Woodbury.

Like Merle, Milton was killed off just as he was becoming interesting, with plenty of untapped potential left on the table. His fate was a nice payoff to his experiments with zombies earlier in the season, and he arguably earned it for turning a blind eye to the Governor for so long, but it's still a shame he's gone.

I am curious why Rick and company are continuing to use the prison when Woodbury is sitting there empty. Granted, the Governor is still out there, but he no longer has an army, and he could crazily attack the prison just as well as Woodbury. Unless we're supposed to assume the prison is more defensible in general, in terms of both the Governor and zombies?

If you're Martinez or that other guy, why in the world would you not gun down the Governor as soon as he starts killing his own people? What possible reason could you have for thinking he won't just shoot you too?

This was far from a perfect season, with its fair share of downs as well as ups (the downs coming mainly in the second half of the season, along with the one of the show's biggest ups in "Clear"), and this show will probably never be what I want it to be, but this was far and away the best and most consistent season of the show so far. As pleased as I am with the relatively optimistic ending, I'm still a little wary of where things go next. Last season ended with the prison and the Governor looming; it seems unlikely that a solo Governor nor the task of integrating Woodbury's women and children into the group will offer up much season-long drama. With the prison still in hand and no immediate crisis looming, hopefully we're not in for a repeat of the wheel-spinning, domestic squabbling that bogged down season two. After this season, though, at least I'm going into the next one more confidant in the show than ever before.
Newer Post Older Post Home
Posted by Austin Gorton at 10:30 AM