It's been longer then usual for me to get back to these posts. I've been busy and lazy and there are other reasons. But the important thing is I'm back!
In this installment I'll go over some shows that I finished watching after I made my rankings and where they would fit if I ranked them. Looking at them I see all but one is animated. Not sure what that says about me...: 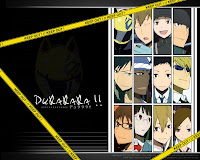 55 1/2 (between My Own Worst Enemy and Invasion). Durarara!!: Oh boy. When I saw previews for this anime all it focused on was a humanoid creature partially made of dark mist riding a motorcycle. It was like a cross between the Lost smoke monster and Ghost Rider. I thought it could be interesting.
What I got was a cross between Saved by the Bell, West Side Story and Lost. The show seems to focus on society, high school and online communication or...something. I gotta be honest, I never quite grasped what the hell this show was trying to say to me.
All I know is this is a show that involves a kid starting a gang though an online forum, another kid starting a more traditional gang that fights with the first gang, a chick possessed by an evil, sentient dagger, a dude who doesn't feel pain which enables him to be super strong, an Irish fairy searching for her head in Japan and a guy trying to control them all in order to start the apocalypse. Imagine all of that put together as boringly and convoluted as possible.
Boring and convoluted is a self perpetuating downward spiral for a series. The more boring a show is the easier it is to become convoluted because if I'm bored then I pay less attention and don't even try to figure out what's going on.
Anyway, after that ringing endorsement if you feel like checking this series out please let me know what the point of this show was because I have no idea. 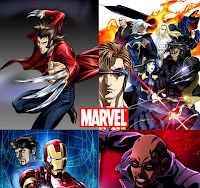 52 1/2 (between Smallville and My Secret Identity). Marvel Anime: I thought about separating this into its separate shows (Iron Man, Wolverine, X-Men and Blade) but all of the Marvel Animes are of almost the exact same mediocre quality. It's a little fun to see the re-imagining of Marvel Super Heroes but the stories overall were lacking and formulaic. There is one big bad guy the hero(es) need to take down, throw in some random villains along the way, introduce a new character just to have them die and make sure to have one special guest appearance. Voila! Mediocrity.

43 1/2 (between The Event and Aeon Flux). Awake: A very interesting premise. A police officer was in a car accident and ends up flipping between two realities. In one reality his wife survived the car accident but his son died. The other reality is the opposite. He switches between realities every night he goes to sleep.
The whole notion of which reality is real and which may just be a fabrication of his mind is played with throughout the show's only season. It can be quite intriguing.
The greatest problem with Awake is it never quite knew what it wanted to be. Did it want to be a surreal psychological study about a man who may be crossing dimensions or may be going crazy? Or did this show just want to use the "alternate realities" as a cheap parlor trick for the main character to solve the crime of the week using information from both realities.
The final episode of the series goes straight up David Lynch on us. It's one giant WTF but almost in a good way. While very confusing the ending also seemed very right for the show. I'm not saying this was a great show but it was unique.

9 1/2 (between Law and Order and Cowboy Bebop). Avenger's: Earth's Mightiest Heroes: When I heard about a new Marvel cartoon based on the Avengers I figured I checked it out. It's always nice to have a show to pass the time and it might even be a bit entertaining.
This show was awesome. Plain and simple. If you're a Marvel fan you need to watch it. I'm not saying this is an adult cartoon but it certainly doesn't dumb down its material. And this series has some of the best handling of multiple plot threads I have ever seen. Some episodes will only have a small hint to some story only to have that plot come to fruition several episodes down the line. I'd even forget about some dangling plot points until an episode would show up much later and address it. Despite that, most episodes stood on their own quite well making it easy for people to jump into the series at any point.
Avengers: Earth's Mightiest Heroes was also excellent at adding new characters to the team but not having it feel forced. I'm pretty sure the Avengers team increases threefold over the course of the series yet all characters had their share of time in the spotlight and were all well rounded.
This shows downside is that some of its animation was lacking. Also, sometimes Thor would be "away" just for plot convenience. Oh, and I'm not a fan of the Hulk being the Hulk nearly all the time. But that's more of a personal preference.
Bottom line is that this show was a ton of fun.

6 1/2 (between Gargoyles and Robotech). Avatar: The Last Airbender: Water, Earth, Fire and Air: The four elements the world (of Avatar) is built upon. Special people (benders) are able to manipulate one of the elements. One VERY special person (the Avatar) can manipulate all four elements. This show focuses on the new Avatar and his quest to save the world from the Fire nation.
This is a smart cartoon that (most of time) doesn't dumb its material down for kids. This makes it much easier for adults to enjoy. It blends action, adventure, comedy and even a little romance to make one enjoyable series.
Overall this show gets a big thumbs up from me. There are a few eye rolling moments (sometimes because the comedy falls flat and sometimes because certain character are spared life for no real reason other than this is a kids cartoon).
My only true complaint is that this show had a self imposed deadline. That's fine but I felt the deadline was too short (three seasons). I think this series could have benefited from one more season to truly flesh things out.
The deadline is also a major plot point in the series. I also feel that in the universe the deadline was too short. I believe the heroes had under a year to complete their goal. It starts to feel like too much is occurring in their world in too short of time.
In the end, all those issues feel relatively minor while you're watching Avatar because you're enjoying it too much.

5 1/2 (between Robotech and ??????). Full Metal Alchemist: Brotherhood: This series flat out rocks. We can quibble with the semantics of "alchemist" since the show's "alchemy" is pretty much magic with the caveat that any "spell" needs the proper ingredients in the immediate vicinity.
Full Metal Alchemist: Brotherhood is about two brothers who begin a quest to restore their bodies to normal (after a botched alchemy experiment) and go in search of the philosophers stone. This ends up with one of them joining the military and getting caught up in military stuff which then leads to a greater conspiracy.
The show is a reboot of the older Full Metal Alchemist series. The original series started based off the manga but ended up getting ahead of the manga and thus having to make up the rest of the story and the ending. The original series suffered because of this.
Full Metal Alchemist: Brotherhood was created after the manga had finished and thus more closely reflects it. As a result the beginning of this series has a "been there, done that" feel to it as it closely mimics the original series. But then things start diverging and the series start to feel wholly different (and better).
This is a fantasy action\adventure series which means it's right in my wheelhouse. But it's also very interesting and incredibly addicting. I believe about the final 26 episodes of this series take place over approximately one single day. It's one giant climax of the good guys facing off against the bad guys in one big battle. Obviously the battle is wide spread and has multiple phases but it is awesome! I loved this series.


Up next time: Finally, we're making it the top 5. Hopefully my next post comes sooner this time!
Newer Post Older Post Home
Posted by Dr. Bitz at 12:44 AM