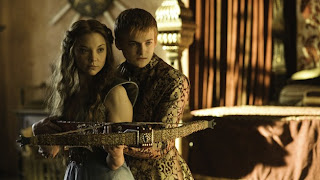 On the Road
Lots of people on one road or another this week, trying to get from one place to another without being discovered, as the show catches us up with Arya and Jamie. The former, along with Gendry and Hot Pie, run into the Brotherhood Without Banners which, if I'm piecing it all together, is the rebellious group the Mountain (brother of the recently-captured Hound) and the Lannisters were trying to defeat last season using Harrenhal as their base of operations (the rat torturer guy was trying to find out information about the Brotherhood), and it consists of remnants of the force which Ned dispatched in the first season to stop the Hound from pillaging villages.

I assume the book goes into more detail concerning what happened to the Hound between last season and getting captured, but hopefully the show might touch on a few things itself.

Gendry and Hot Pie's discussion with Arya about how she should have asked Jaqen to kill somebody important, like Joffrey or Tywin, is probably another wink at the audience (I certainly remember saying the same thing last season), though an answer as to why she didn't would be nice.

I was a little disappointed that Arya's sword fighting skills were so lackluster; I didn't expect her to win, or really even hold her own, but it would have been nice if she could have at least held onto the sword for a bit. What would poor departed Syrio think?

In other sword fighting happenings, the showdown between Jamie and Brienne was a nice bit of action direction. I appreciated being given the opportunity to see both of them display their skills for the other, and everything in that regard was wisely underplayed (there's a moment where you can see on Jamie's face the realization that this woman is actually pretty good, maybe even better than him, but the show doesn't ruin it by having him verbalize it).

I'm also, despite myself, getting a kick out of Jamie's banter with Brienne, his never ending attempts to needle her. Though I do wonder what Brienne expects to happen when they show up at King's Landing. It seems to me that the Lannisters would just grab Jamie and toss her in a cell (if not kill her outright), not actually bargain with her about anything, let alone actually turn Sansa over to her.

If I'm understanding things correctly, I believe that was Roose Bolton's bastard who captured Jamie and Brienne at the end, the guy who was dispatched to check on Winterfell and sent a message back to Robb earlier in the episode.

Meanwhile, Robb continued to do anything but continue the war with the Lannisters. It's kind of sad, because at the end of the first season and beginning of the second, Robb's scenes were some of my favorite, but now I find myself siding more and more with his Bannermen: quit fooling around with Charlie Chaplin's granddaughter and get back to waging war!

I continue to find Catelyn largely insufferable as well. Her story about Jon was effective, and well played (especially after reading the first book, which made apparent just how much she didn't like him), but I still find it funny (and kind of sad) that she's trying to pin the blame of everything that's happened to her family on that moment, rather than her more active screw-ups, like capturing Tyrion in the first season and releasing Jamie last season.

Winterfell (or Thereabouts)
We finally feet Jojen and Meera Reed, who are characters that despite having not read more than the first book I understand to be fairly big deals (kinda like how I knew about the Governor and Michonne on Walking Dead before they showed up despite not reading the comic).

I obviously have no idea what's in store for them, but I took an immediate liking to Jojen just for being straight-forward about Bran's abilities. We'd already pieced together that he was a Warg thanks to the scenes north of the wall, but Jojen provided a little extra explanation, as well as confirmation that the three-eyed crow in Bran's dreams represents Bran, which is always appreciated. There's still plenty of questions surrounding Bran and the Reeds (how does one become a Warg, where are they headed now and what is Bran's overall arc being chief amongst them), but for the first time ever, I'm excited about Bran's story.

North of the Wall
Not much of significance here. More testing of Jon's loyalties, more badassery from Lord Mormont, and that whole Warg business that foreshadowed Bran's story.

King's Landing
I'm continuing to enjoy the heck out of Maergery. Her seduction of Joffrey in this episode was one of the best scenes of the season so far. The way Maergery played Joffrey so thoroughly was a thing of beauty.

That said, as much as I'm liking Margaery, I'm a little worried about how far she'd be willing to go to appease Joffrey in the interest of becoming queen; it's one thing to manipulate him into liking/trusting her, but how much of Joffrey's inherent cruelty is she willing to actively participate in/entertain in the interest of gaining power?

Her grandmother is pretty badass too; there's something strangely powerful about a character who has no interest in playing the game of politics and is, frankly, old enough that death isn't much of a threat. All the usual tools of leverage used in this society are more or less ineffective against her, so she can pretty much say and do what she wants, which is ridiculously refreshing. She even managed to break through Sansa's carefully constructed facade, even if only for a moment, and hearing Sansa finally admit to what Joffrey is was similarly refreshing.

I'm continuing to love watching Cersei flail about, desperate to maintain her power over Joffrey in the wake of Margaery's arrival (contrast her attempts to sow doubt in him early in the episode with the way Margaery later effortlessly assuages those doubts, then endears herself to him even further). It's not quite the comeuppance Cersei deserves, but it's still fun to watch.

Wherever the Hell Theon Is
This episode made apparent the problem with grouping these posts by locations: it doesn't work so well if you don't know where a given character is. So it is that we catch up with Theon after his failed attempt to capture (and hold) Winterfell last season, as he's tortured for information he doesn't have by persons unknown (at least, they seemed unknown to me). Presumably, his men (who knocked him out before abandoning Winterfell) turned him over to this group (I hope they were paid the iron price), and though it looks like he'll be escaping soon thanks to a mole of his sister's, hopefully we'll learn a bit more about his circumstances before he does.

Other Thoughts
No Daenrys this week, which is a shame (something I'd never have said last season), or Stannis. I think just about all the other major characters were covered (Tywin obviously didn't appear, but we checked in on things at King's Landing). Also while he's not a major character, I miss Varys, who has yet to appear this season.

Like Sansa, Bran was hit by the puberty stick between seasons, though it's slightly more problematic for him since "becoming a woman" wasn't one of his plot arcs last season. Thankfully, his growth spurt is mitigated by the fact that the character spends most of his time lying down, quasi-prophetic dreams aside, making it a little easier to suspend disbelief regarding his apparent age.
Newer Post Older Post Home
Posted by Austin Gorton at 10:30 AM