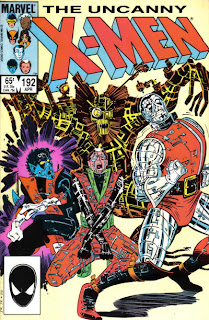 In a Nutshell
The X-Men battle Warlock's father, Magus.

Plot
In the woods near the mansion, Nightcrawler, Rogue and Colossus play a game of hide-and-seek as an improvised Danger Room session. Suddenly, the night lights up as bright as day as something falls from the sky, crashing into an abandoned house nearby. Meanwhile, Storm, Professor X, Rachel and Illyana wait at the airport for Kitty and Wolverine to return from Japan. As Storm and Professor X discuss a course Xavier is teaching at Columbia University, Rachel's mind wanders. She recalls the moments just before she went back in time, as she and an older Kate Pryde attacked the government's Project: Nimrod facility. Under fire, Kate triggered a post-hypnotic command which sent Rachel back in time. She snaps out of her reverie just as Kitty and Wolverine arrive, and Rachel is surprised to discover that Kitty remembers her from when Kitty's consciousness was in her elder counterpart's body.

Elsewhere, the rest of the X-Men search the damaged house and discover the bright flash was caused by the arrival of Magus, Warlock's evil father. He proceeds to attempt to transform the X-Men into techno-organic beings so they can lead him to Warlock, but they fight back. After a desperate battle, they're able to inflict enough damage on Magus to deplenish his energy and chase him off. They call the other X-Men for reinforcements, but by the time they arrive, Magus has vanished. Nearby, Magus absorbs the energy of a police officer and adopts a human form, and begins planning his next move in light of the powerful allies his son has made. Months later, following a lecture at Columbia, Xavier is attacked by an anti-mutant group, including at least two of his students, and is savagely beaten. After they leave, someone drags the unconscious Xavier into a nearby alley.

Firsts and Other Notables
Wolverine and Kitty return to the book and the team following their prolonged absence due to the events of the Kitty Pryde and Wolverine miniseries. Kitty is sporting the short hair and slightly-edgier look she acquired in the course of that story. 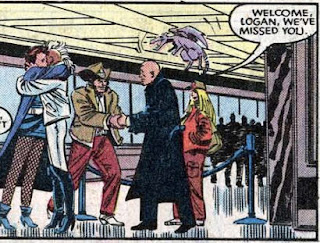 She also meets Rachel for the first time, and recognizes her from her time in the future during the events of "Days of Future Past", despite the adult Kate Pryde (and thus, Kitty's mind) having been unconscious while the older Kate Pryde's mind was in the present. This marks the beginning of a close friendship between the two girls, one that will carry over from this book to the spinoff Excalibur.

It's revealed that Professor X has taken a position teaching at Columbia University, and following one of his lectures, he is attacked and beaten by an anti-mutant group. The attack and his subsequent efforts to recover from it will limit the effectiveness of his telepathy (already referenced in New Mutants #26) and eventually lead to his departure from the team (and the book) in issue #200. Thus, after his most involved period of time with the team (thanks to his restored ability to walk), this issue marks the beginning of the third (and eventually longest) sustained effort to sideline Xavier. 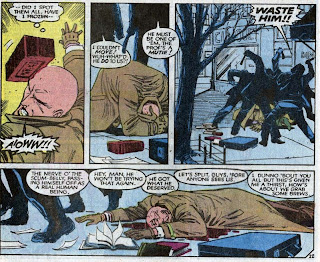 We learn about the events immediately preceding Rachel's arrival in the present, as Rachel, who apparently had forgotten the details of her time travel trip until this moment, suddenly remembers that she was sent back in time thanks to a post-hypnotic suggestion created by Kate Pryde. 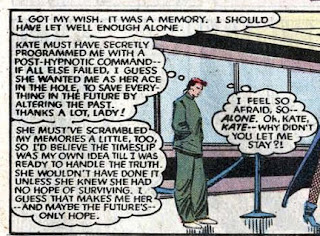 Recalling her trip through time, Rachel says she was "swept away by forces beyond her comprehension" and tapping into "power as primal as creation" which is vast yet "strangely familiar"; it will eventually be revealed that it is the Phoenix Force into which she tapped, and that force is responsible for giving her the power to travel through time.

With Storm depowered (and trying to take a vacation), Nightcrawler is revealed to be the team's new leader, a move that, all due respect to Nightcrawler, has always felt to me like a position he received more or less by default (ie "Wolverine doesn't want it, Kitty's too young, Colossus is too simple. Guess that means you, Nightcrawler!").

Both Rogue and Colossus receive new costumes in this issue, the former trading in her short-lived post-Secret Wars orange costume for a pantsuit variation on her classic green outfit that will be similarly short-lived, while Colossus eschews his current himbo look for a more Soviet-inspired costume that is one of Romita's better designs from this era, and will stick around more or less through Romita's tenure on the title.

Magus, Warlock's evil father, arrives on Earth, and after being nearly defeated by the X-Men, convientantly decides to bide his time before attacking Warlock.

It's revealed that along with her other powers, Rogue has absorbed Ms. Marvel "seventh sense" of limited precognitive abilities (I'm not sure what her sixth sense is). Here, it manifests as being an instinctive reaction to danger, not unlike Spider-Man's spider sense, though moving forward this ability is rarely referenced and is today largely forgotten. 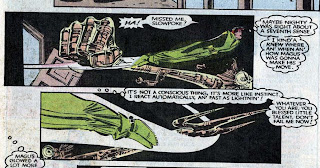 The corner cover box returns to normal, featuring the image that appeared prior to the Kulan Gath story.

I believe Steve Leialoha pitched in on inks (his hand is particularly noticeable in some of the panels that close out the Magus portion of the issue), prompting the "special thanks" credit.

The price of the comic rises to sixty-five cents as of this issue.

The Chronology Corner
The several-month gap written into this issue between the end of the fight with Magus and the attack on Xavier at Columbia creates a window into which several appearances by the characters in other titles are considered to occur, including several of the issues we'll be looking at in the next two weeks (as well as some we won't).

The full sequence, in case you're interested: Wolverine appears in Alpha Flight #16-17, then along with everyone else in X-Men Annual #8, Rom #65-66, Dazzler #38, then Wolverine in the Wolverine/Nick Fury: The Scorpio Connection graphic novel, then the entire team again in X-Men and Alpha Flight #1-2 and finally the final pages of this issue featuring Professor X, followed by X-Men #193.

Those final pages are set sometime during the Christmas season; though cover dated April of 1985, this issue was on the stands in early January.

A Work in Progress
Rogue angrily storms off after Nightcrawler jokes about wanting a kiss from her, and only after she leaves does he realize it was a stupid thing to tease her about.

He also mentions that he hates being wet, something I don't think was as true when he was taking a bath with Amanda. 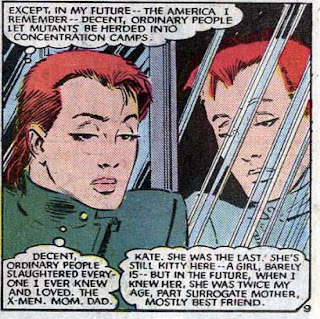 Kate and Rachel are shown infiltrating Project: Nimrod in the future, suggesting that the newly-arrived Nimrod from last issue hails from the same future.

Rachel mentions being Kate's last hope to save their future, though at this time, Rachel is well aware she has arrived in an alternate timeline from her own (as all her tears to that effective attest).

Colossus says that if he's knocked unconscious, his armor will revert to flesh and blood, though it's unclear how he could be rendered unconscious, at least in the manner depicted, considering it's already been established that he doesn't need to breathe while armored up. 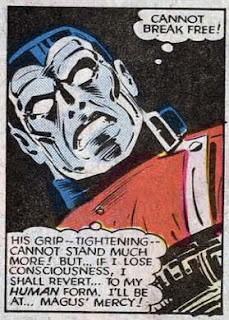 For the first time, Nightcrawler teleports away with only part of something, as he tears off a piece of Magus. 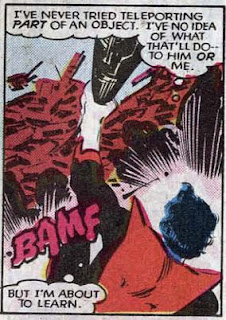 As with the Shi'ar in their early appearances, Magus is impressed when he learns that Earth has repelled Galactus. 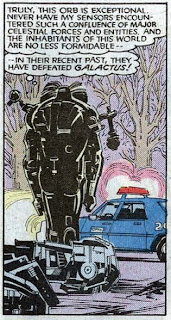 I Love the 80s
Illyana is wearing a Buckaroo Banzai hat at the airport. 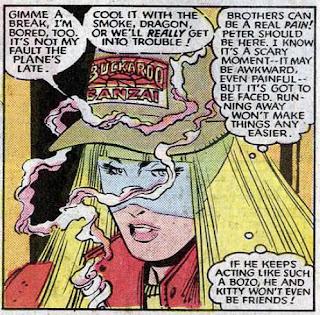 Also, Illyana, as well as Rachel, Storm and Xavier are all waiting for Wolverine and Kitty at their arrival gate, because you used to be able to do that.

Kate provides a handy refresher on Rachel's past as a hound, just in case, you know, Rachel herself forgot what had happened to her or wasn't able to read issue #189. 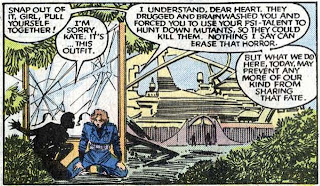 Claremontisms
Rogue refers to Nightcrawler as "Nighty" throughout the battle with Magus, a nickname which, thankfully, doesn't stick.

Artistic Achievements
As Xavier and Rachel overhear ambient thoughts at the airport, the thoughts are depicted in tightly-packed bubbles in an almost stream-of-consciousness manner.

Young Love
In light of her imminent return, Colossus continues to grapple with his feelings for Kitty, wondering if they have truly changed, while Illyana worries that his inability to face Kitty after breaking up with her will doom even his friendship with her.

The Best There is at What He Does
For the first but not the last time, Wolverine says that being leader isn't his style. 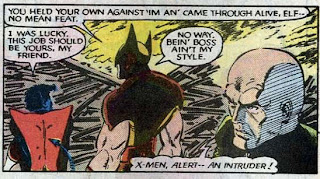 Like a Phoenix From the Ashes
The words which triggered the post-hypnotic command which sent Rachel back in time were "Dark Phoenix".

Human/Mutant Relations
Once again, it is noted that anti-mutant sentiment is at an all-time high thanks to the events of "Dazzler: The Movie", and the issue ends with arguably the most direct expression of that sentiment yet when Xavier is attacked first for being a mutant sympathizer and then because the attackers realize he is a mutant himself. 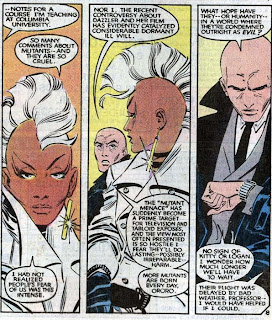 For Sale
There's an ad for a limited series starring Rocket Racoon, soon to be appearing in the major motion picture Guardians of the Galaxy, part of Marvel Studios' Phase Two releases. 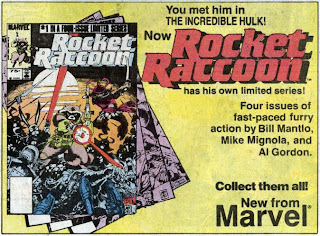 The back cover features an ad for Marvel's Star imprint, a line of comics geared more towards younger kids. 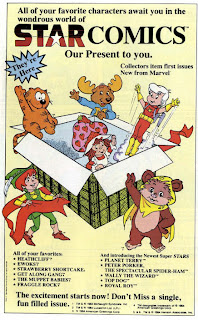 Bullpen Bulletins
Though Secret Wars ended just a month before this issue, Secret Wars II is already being hyped.

Teebore's Take
Like issue #189, this one features a character first introduced in New Mutants and with stronger ties to that book than this one. However, the benefit this issue has is that the ported-over character is a villain, which still leaves room for the main characters. You might get a little more out of this story if you had been reading New Mutants, but "the X-Men fight an alien robot" certainly isn't an impenetrable concept on its own. The important thing is that X-Men are back on center stage, and we get some strong characterization scenes for Nightcrawler, Rogue, Colossus before the fight and some clever action beats (like Nightcrawler teleporting away with a chunk of Magus) during it.

Meanwhile, this issue features the return of Wolverine and Kitty Pryde to the book after their prolonged absence, marking the end of the somewhat transitional period for the team following issue #183. For the first time since that issue (and really, since before Secret Wars), the entire team, such as it is, makes an appearance. It's changed since then: Storm is powerless (and on her way out, temporarily), and Rachel is on hand as a living reminder of the cost of failure for the X-Men - but it once more resembles the more typical construction of the team. Claremont and Romita Jr. will continue their non-traditional, more standalone "each issue is a chapter in a novel" approach to the series moving forward, but we'll continue to at least regularly see a more traditionally-structured team (beginning in earnest next issue, in an issue deliberately constructed to resemble one of the New X-Men's earliest adventures) leading up to issue #200, when the book experiences it's next big shakeup.

Next Issue
Tomorrow, we dive deeper into Legion in New Mutants #27, followed by the eighth X-Men annual next week.
Newer Post Older Post Home
Posted by Austin Gorton at 12:30 PM