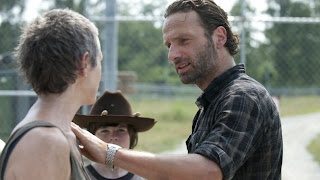 Walking Dead is a show that is at its best when its racing along, when it doesn't slow down enough for the characters to settle into a rut and say stupid things. But after the breakneck pace of the first half of this season, especially the episodes leading up to the mid-season finale, a slow down episode like this one was a necessary chance for the characters to catch their breaths, impart some important information, and get ready for their next move.

After a pretty rousing cold open in which Rick and Maggie more or less single-handedly storm Woodbury and rescue Daryl (and Merle...), things settled down for a lot of talking, but for the most part, it was important and well-written talking. The departure of Daryl, Glen's more or less unspoken frustration and rage at being unable to protect Maggie and the conversation between Carol and Beth (in which Carol likens Daryl's relationship to his brother with her relationship with her abusive husband), were all great scenes that featured the characters realistically reacting to the current situation. Even T-Dog 3.0 was given a few snippets of characterization, enough so that I might just have to start referring to him by his actual name. Season Two showed that too much time spent dithering and talking about unimportant things in lieu of action can grind this show to a halt; thankfully, the writers seemed to have learned their lesson, and are at least grounding the non action scenes in realistic reactions that are true to the characters. I wouldn't want a half season of episodes like this, but the occasionally "talky", while still necessary, is hopefully no longer an "evil".

Other Thoughts
While I have no doubt that Daryl and Merle will remain a significant part of the series moving forward (there's no way the creators are going to write out fan-favorite Daryl for any significant length of time), I'm hoping Daryl's departure marks a continuation of his realization that his brother is an asshat and not the start of a Dixon Brothers pseudo spin-off within the show.

So the ending: on the one hand, it's probably for the best that Rick's mental breakdown is deepening and won't be neatly resolved. On the other hand, I'm not sure I'm excited to watch him become as much an antagonist to the group as the zombies or the Governor. In terms of the later, I really want to see a badass showdown between Rick and the Governor, and I fear that won't happen if Rick is whacked out of his gourd.

I do like how the show is both deepening Rick's madness and developing T-Dog 3.0's character by making it clear to us that T-Dog 3.0 is, at least, a genuinely decent guy who, not unlike Rick once upon a time, isn't yet willing to throw out basic decency in the name of survival. Much as the parallels are being formed between Rick and the Governor (both are cracking further in the wake of the Woodbury raid), and as much I want to see a Rick/Governor showdown, it seems like T-Dog 3.0 is being setup as a possible counterpoint to Rick and the Governor, something which should be interesting to watch as well.

So Andrea remains colossally stupid. She finally learns about Glenn and Maggie, but seems to buy the Governor's line that the attack which led to their rescue was unprovoked. It seems like we're heading in a direction where she's simply not going to believe anything Rick's group says and stands by the Governor no matter what, which would be disappointing. Even her rallying of the people in Woodbury, while the right thing to do from her perspective, more or less just ensured that the Governor would have an army to send after Rick.

I did enjoy just how stupid the people of Woodbury are though, thinking the world outside their city would somehow be safer. They really don't know/remember what it's like out there.

Speaking of, it seemed like there were suddenly fewer people in the city (even accounting for the deaths). If we're meant to assume the crowd Andrea quieted represented most of the population, that seemed small compared to the large number of people seen attending the zombie gladiator games earlier in the season.

I liked how, in the scene in the woods when Rick, Maggie and Glenn were moving the car, there were walkers approaching all around them, but they just did their job and moved on -  a nice indication of the fact that while the zombies remain an ever-present threat, these people are familiar enough with that threat to know when to react and when to just keep on keeping on.

Also, Hershel telling Glenn he's like a son to him was genuinely touching, in part because Hershel is pretty great at saying stuff like that.

Revealing the the baby's crib to be a mail carrier was pretty clever; I'd love to see more little details like that.

Rick refusing to shake T-Dog 3.0's hand was a dick move. Even if you are just going to kick him out, at least  respond to common courtesy.
Newer Post Older Post Home
Posted by Austin Gorton at 3:00 PM