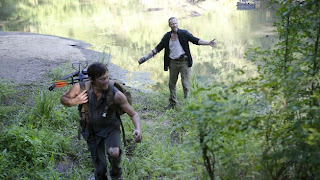 Maybe I'm just a big ol' rube, but I remain impressed with this show's ability to surprise me. The Governor's attack on the prison was, in hindsight, telegraphed loud and clear, from the moment Andrea asked where he was and received a non-answer from a twitchy Milton. And even though I sensed something fishy going on by the time Carol and Axel were getting all flirty (Axel's development in this episode smacked of the show's now-standard "he's going to die soon so we need to make the audience care" characterization), I was still relatively surprised when the governor showed up and started nonchalantly firing into the prison. Though a large part of that surprise came from the fact that it seemed too early for the Governor to be attacking.

While the attack on the prison was a welcome surprise (and it, along with the Dixon brothers bailing out another group from a zombie attack before returning to the prison, gave us a welcome dose of action after last week's more talky outing), it makes me wonder about the direction in which the show intends to go for the rest of the season. In season three, the writers have gotten much better in crafting the quieter, dialogue heavy scenes that so dominated the second season (see, for example, the excellent scene between Glen and Maggie in this episode), but this is still a show that thrives on momentum. Having the Governor attack the prison so quickly, in what was clearly more of a "let's fuck with these people" move than a concerted effort to take the prison itself, undercuts some of the momentum from the building rematch between Woodbury and the prison, and the ultimate showdown between Rick and the Governor. The last thing this show needs is to settle in to a rut, one in which the prison attacks Woodbury, so Woodbury counterattacks, so the prison counterattacks for that counterattack, ad infinitum. Let's hope the Governor's offhanded assault here isn't a prelude to that kind of wheel-spinning action.

Other Thoughts
Another pleasant surprise: I didn't expect Daryl to be gone for long, but I didn't expect him to return so quickly, either. While the scenes from the next episode suggest he hasn't entirely dropped his allegiance to his brother yet, it was nice to see that it didn't take long for him to realize he'd grown out of taking his brother's BS.

Bringing Merle back to the prison should hopefully shake things up a bit. If I were anyone in that prison, I absolutely wouldn't want him anywhere near me, yet there's no denying he's a tactical advantage on several levels.

Between last episode and this one, Michonne apparently healed up and moved out into the bus, which, given how adamant Rick was for her to leave after she was patched up, probably deserved some comment. Also gone were T-Dog 3.0 and his crew who didn't, as I assumed, just temporarily step out into the yard when Hershel suggested they leave last episode, but seem to have left the prison entirely. I was expecting them to show up, instead of or in addition to the Dixon Brothers, to pitch in during the Governor's assault, but no go.

I'm still not terribly excited about this whole "Rick going mad" plotline, in part because its not terribly exciting to watch and in part because I'm not sure what the endgame is, but I at least appreciate that he seems to realize he's going mad, and that, at the very least, the sound of gunfire is enough to temporarily shake him out of his stupor.

That said, the scene where he's talking to Hershel about seeing Lori and he comes across like a ten year old boy who could, at any minute, start talking about what the leprechauns and fairies told him to do, was pretty great.

Special thanks to Dr. Bitz for the above joke about the leprechauns and fairies, and also for suggesting that Rick was just following Ghost Lori because she was going to lead him to the water his group needs to survive.

Smashing through the gates and dropping off a van full of zombie was a pretty neat tactic (and one consistent with that group's approach to the zombies) but at the same time, once Hershel got out of harm's way, I have a hard time viewing them as much of a threat. I mean, there were a lot, but it wasn't exactly a herd, and they're relatively self contained in an open space. As a tactic in the midst of a battle, they make a good distraction, but I'd hope that in the long run they don't turn out to be much more than a nuisance.

Andrea remains Queen Moron of Moronville. That is all.
Newer Post Older Post Home
Posted by Austin Gorton at 11:00 AM