As promised, it's a shorter post this week thanks to Mrs. Teebore's absence this last week. Hopefully we'll do some catch-up before she leaves again in March. 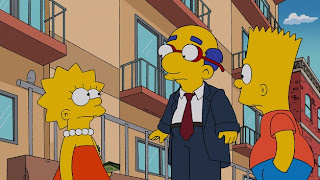 Bart and Milhouse discovering that Milhouse can pass for his dad, then dressing him up like an adult is certainly an original idea. It's never gets anywhere close to the level of Bart getting a fake ID and taking his friends on a road trip to the Knoxville Wig Sphere, but it's definitely something we haven't seen before, and at this stage of the game, that's something.

Other Thoughts
I did appreciate that Lisa immediately saw through the ruse, as any sensible person would.

The ending, with Milhouse accosted by the apartment sales woman, was heading into some risque territory, but I did like the way the episode subtetly put Milhouse into situations like that where it became increasingly harder to fake being an adult.

As usual, I enjoyed all the bookstore-related material in the first act. The "closing in three weeks" sign on the outside of the store was a nice touch.

"The Longest Daycare" short was pleasant enough. I appreciated the callback to the Ayn Rand School for Tots from "A Streetcar Named Marge". I bet it looked especially good on the big screen.

Homer: Finally, a kid’s show that isn’t trying to sell me something. Which reminds me: We need to order more rectangles.

Ice Road Fisherman: This has been our way of life since we were pitched the idea by reality show producers. 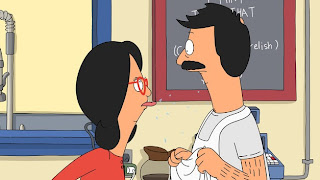 Linda is the one main character on the show who thus far, seems to work best in small doses, offering asides to the antics of her family or playing off one of their weirder personality traits. This episode, then, is one of the first to put Linda in the spotlight, and thankfully, she rises to the occasion, turning in a strong starring performance that manages to be funny and true to her character. It also helps that this episode features a fantastic musical number, one which reminded of the kind we used to get during the golden age of Simpsons.

Other Thoughts
Nice of Tina to get a win for once. Her plotline, while kinda gross, was also really sweet.

Louise: Hold on. Let me get comfy. Evaluate your wife.

Josh: I was being a jerk. He was just being a turtle. 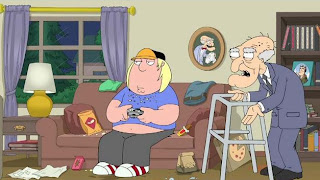 Family Guy so often flies off into wild and crazy stories that when it decides to do a straightforward sitcom episode, it's almost surprising. "One characters gets blackmailed into being another character's slave" is a pretty hoary sitcom cliche, but there was something enjoyable about seeing the show tackle it (at least until Herbert, arguably the show's least funny character, got sucked into the final act of the story).

Other Thoughts
I'm not entirely sure what to make of the Brian/Stewie subplot, but I did enjoy Stewie's rage at discovering most singers don't write their own songs, and it was great that they actually got Anne Murray to show up as a guest star.

Very little Peter in this episode, once again (I liked Chris finding his cards used to apologize for farting on people's cars).

Also funny: the absurdity of the thin, be-hatted Chris in the flashback and, despite my better judgement, the fact that Herbet managed to silently scoot his bed closer to Chris' in the dark.


American Dad: Naked to the Limit, One More Time 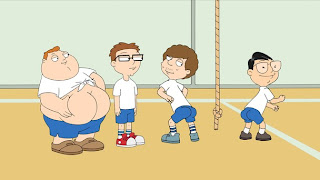 So...was that the end of Jeff? Or, at the very least, will he back with some explanation of how he got off that ship? I don't really care much either way (he had his moments, but I always liked Haley with the smooth talking CIA koala bear, weird anthropomorphic considerations aside), but I'm curious if this is going to be a case of American Dad changing its continuity (like the Jeff/Haley marriage in the first place) or something that will be overwritten next episode like so many animated shows' continuity.

Other Thoughts
I remembered many of the characters from the Roger montage, but there were at least a few that had to be new, as they were distinct enough that I'm sure I would have remembered seeing them before.

Nice to have Principal Lewis back. His casual handling of the drug runners was a highlight.

As was the cutaway to Jeff's inability to keep secrets.


How I Met Your Mother: The Ashtray 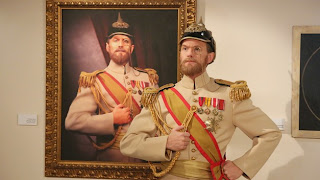 A nice bounce back after last week's subpar episode. How I Met Your Mother has always had fun with telling the same story from different perspectives, and this was a classic example of that, with each subsequent retelling smartly building on what came before. It also helped that the episode was anchored by the return of the Captain, arguably the best thing to come out of the Ted/Zooey story.

Other Thoughts
Thankfully, this episode was funny enough that I'm willing to overlook the absurdity of the resolution to the "Barney needs to be at the center of every crazy story" subplot (helped along by the hilarity of his rock star entrances and the “The Royal Archduke of Grand Fenwick" play), as well as the fact that Lily's artistic ambitions seem to rise and fall as the plot demands it (and I'm pretty sure they were laid to rest the last time they were brought up).

Having Lily take the Captain's ashtray as punishment for being mean was a nice callback to that season two episode when she stole Ted's boss' baseball (which, incidentally, also featured Lily realizing that her true passion was teaching after all...).

Seriously, Dr. Bitz and I had a hard time remembering what finally ended Ted's relationship with Zooey. Something about him going ahead with the GNB building?

Barney: ...a simple play you can do using two everyday objects; a Prussian military costume and an oil painting of yourself. 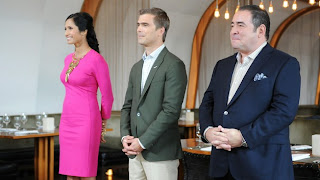 The surprise of absolutely no one (and despite the judges' best efforts), our finale comes down to Brooke and Kristen. While that surprise isn't exciting, I'll gladly exchange excitement for a finale in which the obvious best chefs face off against each other. I only hope they both bring their A game to the final challenge, and we aren't left with a lopsided, runaway finale.

Other Thoughts
You know, we probably wouldn't need a two part finale if we could cut twenty minutes of the useless "here's what the chef's are up to now" material. This show has always lacked a Tom Gunn-like mentor, so it's utterly pointless to try and recreate this bit.

Also, while it's always been obvious that the each season is filmed months before it aired, it was surprising to see the show drop that particularly curtain and make it so clear that everything we'd watched thus far happened six months ago. That wait must have been awful for the finalists.

The producers did do a pretty great job with the editing on this episode. As presented, all three of the contestants had enough misses mixed in with their hits that I was somewhat anxious about the outcome.

This'll be our first ever all-female finale, and one or way or another, only the second female Top Chef.

Seriously, Kristen plowing through Last Chance Kitchen and advancing to the final round is such a great repudiation of her batshit insane dismissal. Whether she wins it all or not, I hope everyone involved in the show realizes how much her continued presence is a great big slap in the face to the judging philosophy of not considering overall performance. 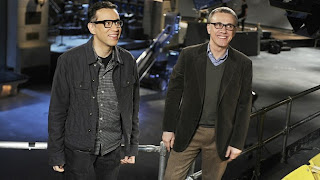 So this is turning into a bit of a rough stretch for the show. While Christoph Waltz seemed game for anything and did the most with what he was given, once again the writing let down the host, with a handful of meh sketches and most that featured one or two funny bits that never quite coalesced. This could have been worse, but we're still waiting for a standout episode in 2013.

Other Thoughts
We did get another game show sketch, though it wasn't anything special (even accounting for the sound problems at the beginning), the highlight being Christoph Waltz dancing at the end (a nice bit that otherwise saved what looked to be wasted effort in casting Walz as the host).

While I'm always in favor of Nasim Pedrad getting more air time, I'm not sure we really need to see the character she trotted out this week again.

The Jamarcus Brothers, the sketch featuring two soul singers and their virginal brother played by Waltz, didn't have a lot to it beyond the hilarity of some of his song titles, but those titles (“Where Does My Penis Go? Point To Where", “Please Explain What We Do Now That We’re Naked.”) were pretty hilarious.

When Fred Armisen showed up again as Regine, I gave the sketch about a minute to see if it was going to do anything different than it did last time. Once it become clear it wasn't, I fast forwarded through the rest.

What was Fox and Friends doing buried so deep in the show? This wasn't one of its finest outings, but it is reliably funny, certainly moreso than many of the sketches which preceded it in this episode.

Both the cold open and Weekend Update were strong - I enjoyed both Killam's parched Marco Rubio and McKinnion's Russian peasant (though I do have an odd affinity for Russian peasant humor).

Favorite Sketch: The clear highlight of the night was "Djesus Uncrossed", a hilarous sendup of Quentin Tarantino that hit all the right notes and featured some great impressions. I especially liked the closing critical remark: a less violent Passion Of The Christ.

Least Favorite Sketch: When it's so bad you reach for the remote, that's gotta take this honor. So "Regine".