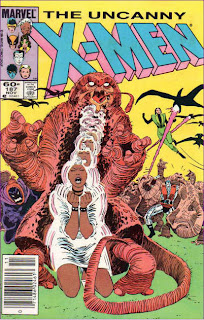 In a Nutshell
The Dire Wraiths attack Forge and Storm.

Plot
Leaving Forge's building in the midst of a thunderstorm, Storm overhears an alarm triggered by a Dire Wraith teleporting into the lobby. Investigating, she's attacked by a Wraith herself but his saved by Naze, who has arrived in response to a prophetic dream he had of Forge being under attack. As Storm calls up to the penthouse to warn Forge, he's attacked by a cadre of Wraiths. In response, Storm and Naze begin to fight their way up to Forge. Storm is chased onto the roof by a Wraith, only to discover that the thunderstorm has become a blizzard. Storm is able to lock the Wraith onto the roof, leaving it to die. Just then, a stunning mental wave envelops Naze, Forge and Storm, briefly linking their souls. 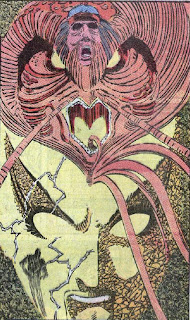 Storm reaches Forge and they fight off his attackers just as Naze arrives, followed closely by Colossus and Rogue. Forge wonders what caused the soul link, but the group is suddenly overwhelmed by a seeming onslaught of Dire Wraiths. During the melee, Naze slips away and enters Forge's sanctum sanctorum, the seat of his magical abilities, and casts a spell. Below, Forge realizes that the majority of the Wraiths the X-Men are fighting are illusions, and creates a holographic simulacrum of the Spaceknight Rom, the Wraiths most hated foe, to expose the real ones. With the remaining Wraiths defeated, the X-Men believe they have won until the fabric of reality tears open and they are engulfed by Shadow Beings.

Firsts and Other Notables
After his first appearance in issue #184, Naze, Forge's America Indian mentor, returns, drawn to Eagle Plaza by a prophetic dream, and reveals his own magical abilities as well as the fact that Forge is his foster son. 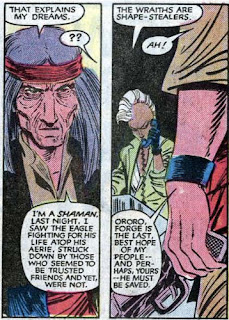 The Adversary, a god-like being who will become the main antagonist of the "Fall of the Mutants" crossover, though unnamed, is first mentioned this issue, described as being "neither human nor alien, both alive and dead, possessing the divinty of a god and the cruel humor of the devil". He will be revealed to be working behind the scenes of next issue, and is considered the threat to which Naze tried to warn Forge in issue #184. He will also be revealed, via a future New Mutants letter column, as the entity behind the Demon Bear.

Next issue implies that during the course of this issue, Naze is killed off panel and replaced by a Dire Wraith, his death triggering the mental wave and linking of souls experienced by Storm, Forge and Naze in this issue. However, X-Factor #115 will reveal that Naze is alive and well after all, his apparent death at the hands of the Wraith in this issue and his Wraith form's subsequent possession by the Adversary, as seen next issue, all part of a plan hatched by him and guardian of the multiverse Roma to combat the Adversary.

We'll learn next issue that the unseasonable blizzard pummeling Dallas is the result of the Casket of Ancient Winters being opened in Thor #348-349.

Forge programs a holographic simulation of Rom and Starshine, the Dire Wraiths hated foes. Marvel, which no longer holds the rights to Rom, is unable to reprint his series, though his one panel appearance here has not prevented Marvel from reprinting this issue.

A Work in Progress
Storm compares the Dire Wraiths to the Brood in terms of sheer evil.

It's revealed that sometime in the past, Storm received handgun training from Wolverine. 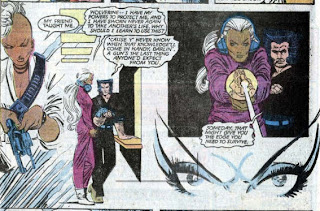 In the course of the Dire Wraith attack, the powerless Storm experience's Yukio's zeal for life in the face of overwhelming odds. 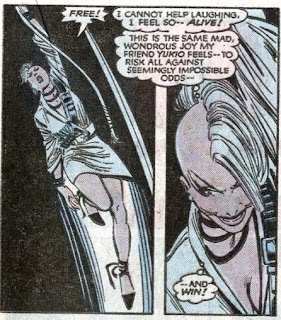 Storm notes that she willing locks a Wraith out in the cold to die.

Later, Storm is somehow able to detect the presence of a magically cloaked Wraith.

It's made clear that Forge possesses some magical abilities, though it's also made clear he uses them reluctantly and is out of practice.

Colossus learns about Storm's power loss in this issue, while it's confirmed for Rogue.

For Sale
There's a full page ad for Marvel Graphic Novel #12, aka "Dazzler: The Movie". 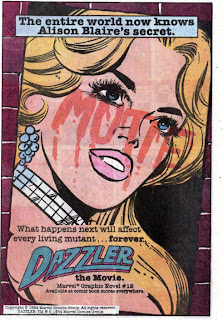 Teebore's Take
Set against the backdrop of the Dire Wraith's escalating attack on Forge (thus tying this story in with his buddy Bill Mantlo's ongoing Rom arc), Claremont largely uses this issue as a way to prove that Storm can still be an effective action/adventure character in the wake of her power loss. In addition to her already-established hand-to-hand combat prowess, we here learn that she'd received handgun training from Wolverine in the past and see examples of how her resourcefulness and tactical thinking haven't been dulled (there's also an attempt to vaguely setup some kind of sorceress abilities, but this thankfully remains vague and underdeveloped throughout Claremont's tenure). The result is essentially a big dumb action story, but a well executed one, and a n effective counterpoint to the more maudlin proceedings of the previous issue. It doesn't quite stand entirely on its own nor fit the recent more episodic nature of the narrative as well as previous issues (in fact, it feels a lot like the second part of a traditional three part story), but it's entertaining enough.

Next Issue
Tomorrow, New Mutants #22 gives us Rahne's fairy tale, and next week we finish up the Dire Wraith/Forge story in Uncanny X-Men #188.
Newer Post Older Post Home
Posted by Austin Gorton at 10:00 AM