A short post this week, as most shows took the week off in fear of the Super Bowl and to gear up for sweeps (I also didn't find the time to watch Glee, and haven't seen the return of Community yet). But everything'll come roaring back next week, including Walking Dead.

Once Upon a Time: In the Name of the Brother 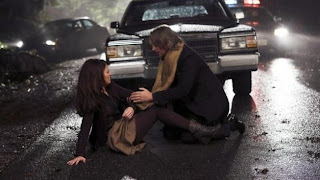 As with the last episode, the flashback in this one was largely superfluous (though it's always a pleasure to see Gregory Itzin, even if he was especially hammy), more or less just filling in details of the larger story we learned in Whale's first flashback earlier this season. Thankfully, the non-Regina events in Storybrooke were interesting enough to carry the episode, focusing on the best way to handle an intrusion from the outside world and featuring some genuinely humorous remarks on the nature of the characters' situation.

Other Thoughts
I'm not sure if this was ever made clear before, but this episode revealed that the curse was also preventing people from accidentally stumbling into Storybrooke, though it couldn't have been keeping everyone out, because there's no way the town was entirely self-sufficient (at least not while still appearing like a totally normal town). I mean, someone had to have ordered something off Amazon in the years they were cursed. Then again, magic.

The Cora/Regina storyline continued to be the most frustrating part of the series, because I still want more than a reversion to villainy for Regina. Her breakdown to Cora in the car was a maddening case of "the character is doing this because the writers say so", not because it makes any sense for the character.

I wonder why no one thought to check Regina's secret crypt for her, as Cora did. If the real Henry had gone there, she probably would have revealed herself.

I loved Emma's comment about how they can't be sheriff as a family, as well as the reminder of Mary Margaret's history with Whale.

Henry's comment about how Dr. Frankenstein isn't in his fairy tale book was appreciated, simply because it means the writers are aware there's a story to be told in the presence of characters from other "worlds" in Storybrooke.

Mr. Mendel's ringtone was the Star Wars theme, thank you Disney's acquisition of Lucasfilm. Also, Mr. Mendel was played by former 90s goofball Ethan Embry, whose gotten...puffier since last I saw him, so much so that I didn't recognize him until I read the credits.

Are we to infer from Gold creepily kissing the amnesiac Belle that true love's kiss isn't powerful enough to overcome this particular side effect of the curse, or that Belle/Gold aren't truly in love? 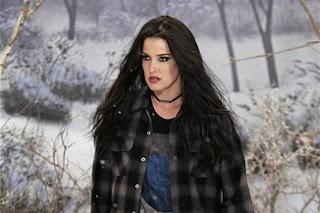 As a guy who liked Alanis Morrisette way more than he should have in high school, I greatly appreciated the dark turn Robin Sparkles took which dominated this episode, as well as the show reviving a fair number of its Canadian jokes (which are never not funny). Underneath the Tunes was a thing of beauty, from all the Canadian guest stars (including Dave Thomas, one of the McKenzie brothers, as Robin's manager) to the still-hilarious notion that pop culture is slow getting to Canada, leading to the assertion that Robin invented grunge in 1996 (I loved Marshall's sad head shake when Geddy Lee reaffirmed as much). The overall thematic connection to the question of romantic obsession was tenuous at best, but did its job of setting up the Robin Daggers material.

Other Thoughts
I've heard that Dave Coulier doesn't really have a sense of humor about himself, so I was surprised to see him pop up to slyly mock the oft-repeated rumor that he's the subject of Alanis Morrisette's "You Outghta Know", but it was pretty great. The Full House gag was amusing too.

Nice to see Abby Elliot (my preferred Elliot) again. I'm not sure if she's just a one-off character or not, but I wouldn't mind the show killing some time with her before we get to the Mother.

Barney broke into Robin's apartment (shouldn't he have a key by now?) using a "property of Ted Mosby drill", which was a nice touch.

Barney: They’re two for a loonie. Dollar! Whatever!

Ted: Lily never burned anything for you!
Marshall: Clearly you never tried her pot roast
Barney:*rimshot* Brought it for something completely different, but it worked out, right?


Top Chef: Kings of Alaska
Another in the standard "we're in our finale location so we'll highlight the local food" episodes, and, as always, this late in the game, it would have been nice to have a challenge more focused on putting out a great plate of food than in feeding the masses. It's kind of hard to fault Lizzie for not creating a more elegant dish when the setting didn't exactly cry out for elegant food. That said, while Lizzie was a pleasant enough contestant with whom I've never been irritated, her departure wasn't exactly surprising. It's frankly a surprise she lasted this long.

Other Thoughts
For someone who has a seemingly endless supply of t-shirts expressing his love for bacon, Josh sure seems to get tripped up whenever he cooks it.

I'm surprised the whole "bake your own bread" thing didn't prove to be more dramatic; I expected to see that trip up somebody, but everyone just made their bread and moved on.

This isn't the first time it's happened, but it seemed more pronounced for whatever reason: Padma's attempts at speaking loud and forcefully usually involve her talking slowly, like she's speaking to someone who doesn't understand English and she thinks talking slower and louder will help them understand. It drives me nuts.

Similarly, I'm always mystified by which contestants Padma seems sad over saying goodbye to. Like, did her and Lizzie bond off camera or something?

Going into the finals, I'd have pegged Sheldon as more likely to win than Josh, but he's really faltered these last two elimination challenges.

In Kristen's absence, Brooke is really cleaning up. Brooke vs. Kristen head-to-head for the title!

By looks of next week's episode, it seems like they're really waiting til the last minute to integrate the Last Chance and viewer saved winners. More than anything else, I'm really curious to see how that plays out.

Speaking of, Kristen stayed alive by taking out Stefan and then Lizzie, so my dream of her returning to shove it to the producers is still possible. 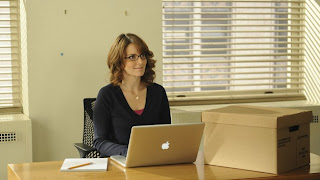 It's so rare in any age that a TV show gets to end when it wants, how it wants, on its own terms. Even rarer is when a TV show is able to end well. 30 Rock managed to do both.  Most TV show finales do some combination of four things: wrap up existing plotlines, reinforce existing relationships, make the fourth wall slightly less transparent to say goodbye to the fans, or create a setup that allows the audience to imagine what happens next for the characters. 30 Rock, because it went into this season knowing it would be the last, was able to do all four, in part by essentially spreading it's finale across its final three episodes (heck, the show could have ended with "A Goon's Deed in a Weary World", but they came back for two more episodes to hit all those finale beats). The end result was a perfectly fitting conclusion to an excellent series, one which managed to be at once everything the show ever was: satisfying, goofy, bizarre, knowing, satirical, heartfelt and hilarious.

30 Rock is one of the rare shows I watched (time to start talking about it in the past tense...) without starting from the beginning. I picked it up back in the fourth season, sick of watching it win Emmy after Emmy and being left in the dark, and was immediately hooked. Nevertheless, I didn't expect to be terribly moved when it ended, at least not compared to the sadness I feel when a long running favorite departs or the rage when something outstanding is cancelled before its time. Nevertheless, I find myself saddened by the departure of 30 Rock. It was a show that managed to be, at the same time, like everything else on TV and like nothing else on TV, one that skewered pop culture even while embracing it. That's an incredibly difficult tight rope to walk, and even though I haven't watched the show walk it from the beginning, I will greatly miss it.

Most entertainers say that want to exit the stage leaving the audience wanting more. That's exactly what 30 Rock has done, exiting stage left in the midst of a creative peak. While that spares us watching the show's inevitable decline as it stumbles its way through season after season long after it stops being funny, it does leave us without any more 30 Rock.

Kudos for sticking the landing. You will be missed.

Other Thoughts
Liz and Tracy's conversation at the strip club (the same one from the pilot, which I have seen) was a pretty great capstone to their relationship, while Liz telling Jack she loved him to spare him from actually saying the word was the last in a series of fantastic and touching Jack/Liz moments.

Pete's obvious hints at faking his death was quite possibly my favorite Pete plot ever.

Loved the final scene of the tag, with a confirmed-immortal Kenneth entertaining the idea of doing a show about Liz Lemon's adventures writing TGS proposed by her great-grandaughter after gazing at 30 Rockefeller Center inside a snow globe. A brilliant nod to well known series finales from TV's past that left us with the idea that the entirety of 30 Rock is just art imitating life imitating art imitating life, ad infinitum.

Conan O'Brien: We were going to lose our virginity together! Now I'll never lose it!

Jack: For your information, most of Tan Penis Island was destroyed in Sting's house fire.

Tracy: That's our show. Not a lot of people watched it, but the joke's on you, because we got paid, anyway.
Newer Post Older Post Home
Posted by Austin Gorton at 11:00 AM