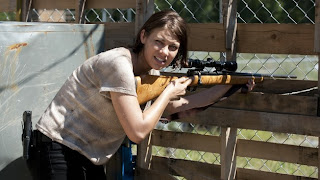 Largely a treading water episode, as both Woodbury and the prison gear up for a bigger showdown in the wake of last week's sortie, it nonetheless featured a reunion a long time coming between Andrea and the group at the prison. Andrea's reaction to the changes wrought in her old friends effectively underlined just how much everyone has changed (when Carol told Andrea about Shane, it felt like she was describing events from four seasons ago, not just eleven episodes) as well as, unfortunately, just how broken a character Andrea has become (the fact that she even had to sneak out of Woodbury should have been enough of a warning bell to her about the Governor).

The end result was, perhaps, not as cathartic as we may have liked. Andrea remains far too dumb a character to actually accept the truth about the Governor that is staring her in the face, her personal goals far too muddied (does she merely want the safety offered by Woodbury? To protect the people inside, for someone reason? Does she truly care about the Governor?) to make any of her decisions resonant. So her whole visit to the prison come off more like a social call than any sort of call to action. The final scene suggests that perhaps her time at the prison did open her eyes to reality a bit (though she obviously wasn't ever going to kill the Governor in cold blood - that would be far too bold a move for a character this wishy washy), but because Andrea remains so maddeningly inconsistent and outright dumb its hard to ultimately care.

Other Thoughts
On the one hand, I was surprised to see Merle working alongside the group with minimum fuss so quickly; on the other hand, given that we all know Merle isn't going anywhere anytime soon, it was probably for the best that we skipped past the (ultimately pointless) historonics over his presence and moved right to reluctant acceptance and general unease (that said, it was pretty crazy that Merle of all people seemed more welcome in the group than Andrea).

Similarly, I know that not every important conversation between Andrea and the prison group needs to be shown on screen, but it would have been nice to see Andrea being told about the Governor's assault on Maggie, simply because I feel like that event might have triggered the most visceral reaction and been the hardest for her to rationalize.

In one of the conversations I'm glad was included, Andrea accuses Michonne of poisoning the group against the Governor. She just really doesn't get it.

Andrea asks after Shane, then Lori, but T-Dog has to be brought up by the prison folk.

I loved the way everyone peeled out of the prison when Andrea showed up, covering each other, watching for possible attacks, before disarming her and drawing back inside. After so many episodes of watching everyone flail about stupidly in terms of action, I will never get tired of watching the group move about this world efficiently and effectively.

That said, I could still stand for some more casual killing of the zombies. Andrea probably could have ran down a couple with her car on the way out, and Merle kicked at one on the fence instead of, you know, stabbing it with his arm knife.

Speaking of which, even putting aside the issue of trusting Merle, how hilarious was it that the guy with one hand is tasked with opening up the gate?

T-Dog 3.0 and his crew have ended up in Woodbury. Probably shouldn't have kicked them out, Rick. My only hope is that some of them, at least T-Dog 3.0 himself, eventually realizes they've just traded one crazy for an even crazier crazy.

I really liked the scene between Merle and Hershel, both for Hershel being civil to Merle without being entirely buddy-buddy and for Merle not being an asshat.

It's nice that Michonne is getting a little more characterization (she went back to Woodbury to expose the Governor for who he really is, apparently to wake up Andrea) but she could still use some more. Maybe in next week's apparent side quest episode.

As far as that closing scene goes, the only suspense involved stemmed from whether or not Andrea was going to get caught nakedly looming over the Governor with a knife. The only question is whether the creators realized that, or if they honestly expected us to wonder whether she'd actually kill him.

When Beth dies, so too will all music.
Newer Post Older Post Home
Posted by Austin Gorton at 11:00 AM